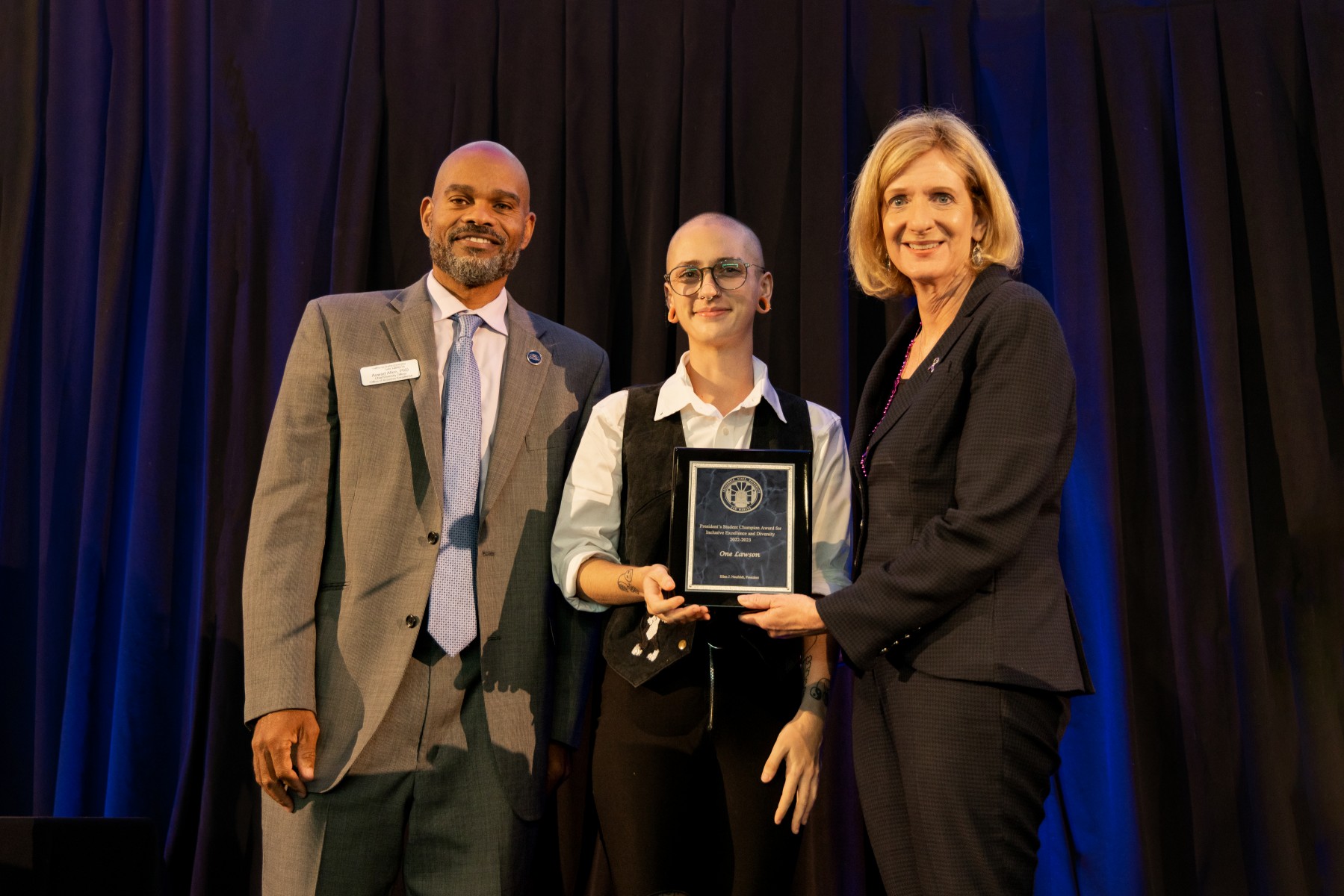 Last Thursday, One Reks (center) was honored with the President’s Student Champion Award for Inclusive Excellence and Diversity. They are pictured with President Ellen Neufeldt (right) and Chief Diversity Officer Aswad Allen. Photo by Alicia Lores

Editor’s note: This story originally ran in NewsCenter on June 27, when One (pronounced “OH-KNEE”) Reks went by the name Ashton Lawson. On Thursday at the All Peoples Luncheon, Reks was named the winner of the annual President’s Student Champion Award for Inclusive Excellence and Diversity.

Cal State San Marcos will have a contingency of students and support staff walking in July’s San Diego Pride Parade for the first time since 2019.

There will many returners representing CSUSM. A mixture of ages and cultural backgrounds will show the campus’ diversity.

One of the newcomers this year will be One Reks, a rising senior who is double majoring in sociology and women, gender and sexuality studies.

The smile has barely left their face since receiving the invitation. The excitement in their voice is palpable, a combination of nervous excitement and anticipation of a life-changing event.

Their journey to get there is one of perseverance, courage and relying on the kindness of others to walk with you through life’s most difficult challenges.

Growing up transgender in a family unit that didn’t know what that meant or entailed was confusing at its best, suffocating at its worst, and Reks didn’t have much support at home either emotionally or academically.

School was often a struggle. Reks' parents talked about going to college but there were no concrete discussions or steps made to get there.

Reks knew they weren’t heterosexual at a young age. Their gender didn’t feel right. There was nobody in their inner circle to assure them their feelings were valid, their inquiries were healthy.

“I was actually forced to come out quite a few times for different reasons,” Reks said. “I don't like to lie, and I don't like to hide things. So when someone asks me something, I'm very transparent. And so that happened a lot growing up. I just never felt like I had a choice to just express and be within myself.”

At Mission Vista High School in Oceanside, Reks said not that many students were out. The space that facilitates coming out comfortably didn’t exist in their mind.

They lost friends after coming out. A few stuck around but many didn’t know how to act. Their best friend didn’t become their best friend until after high school when they each came out.

Directionless and uninspired, Reks decided to give community college a go.

Nearby Palomar College was the destination, but that challenge was nowhere near easy. Failure came at nearly every turn, which included changing potential majors eight times.

In one of their final academic advising appointments, the adviser asked a simple question: What do you want to do?

“I was like, ‘I don't know, I kind of just want to help make the world a better place for people,’ ” Reks said. “It was just funny because from that she suggested sociology. Being able to be exposed to this field that really does look at people and look at how society is. Sociology really does try to work to make living everywhere better for everyone in the way that they need.

“Having a motivation and dealing with all of these not-great things that I was personally dealing with, other people shouldn't have to go through that. If I have to do something, I might as well do something that's going to also help other people’s lives.”

A mentor and a safe space

When Reks arrived at CSUSM after six years in and out of Palomar, they wanted to quit again.

It was a whole new world of responsibilities, intimidating class sizes and a social construct they were unfamiliar with.

But just when their faith in the journey was being tested, along came a place and a person. Both would change Reks' life forever.

Robert Aiello-Hauser is a lecturer and the director of student engagement and inclusion at the LGBTQA Pride Center. They were teaching a course titled gender and sexuality in pop culture and media in fall 2019 when a quiet transfer student tried to blend in without standing out.

Aiello-Hauser was transparent about being non-binary, the same identity as Reks. It didn’t take more than a few personal encounters before Reks figured this was the inspiration they had been waiting their entire life for.

A light bulb went on.

“Being in that class really opened my eyes that I can be really out and proud and advocate for other people who may not have the privilege to do that,” Reks said.

Aiello-Hauser encouraged them to apply for a job as a peer educator and administrative assistant at the Pride Center on campus after they were already a volunteer. When the pandemic hit, they messaged Reks all summer, keeping them in the loop about the plans to reopen.

When Reks grew frustrated and wanted to quit the center and school, which came at the same time they stopped talking to their parents, Aiello-Hauser provided the strength when Reks felt weak.

“One is the epitome of why I do what I do,” Aiello-Hauser said. “Assisting a student on their identity journey in finding their best self and seeing them empowered is the biggest reward. And then seeing how they want to give back to the community and ensure folks have a great experience by being that role model is the biggest reward. I know it’s not easy and there have been bumps in the road, especially with COVID and taking a semester off, but they have persevered.”

Said Reks: “I wouldn't be here now I don't think if it wasn't for Robert.” 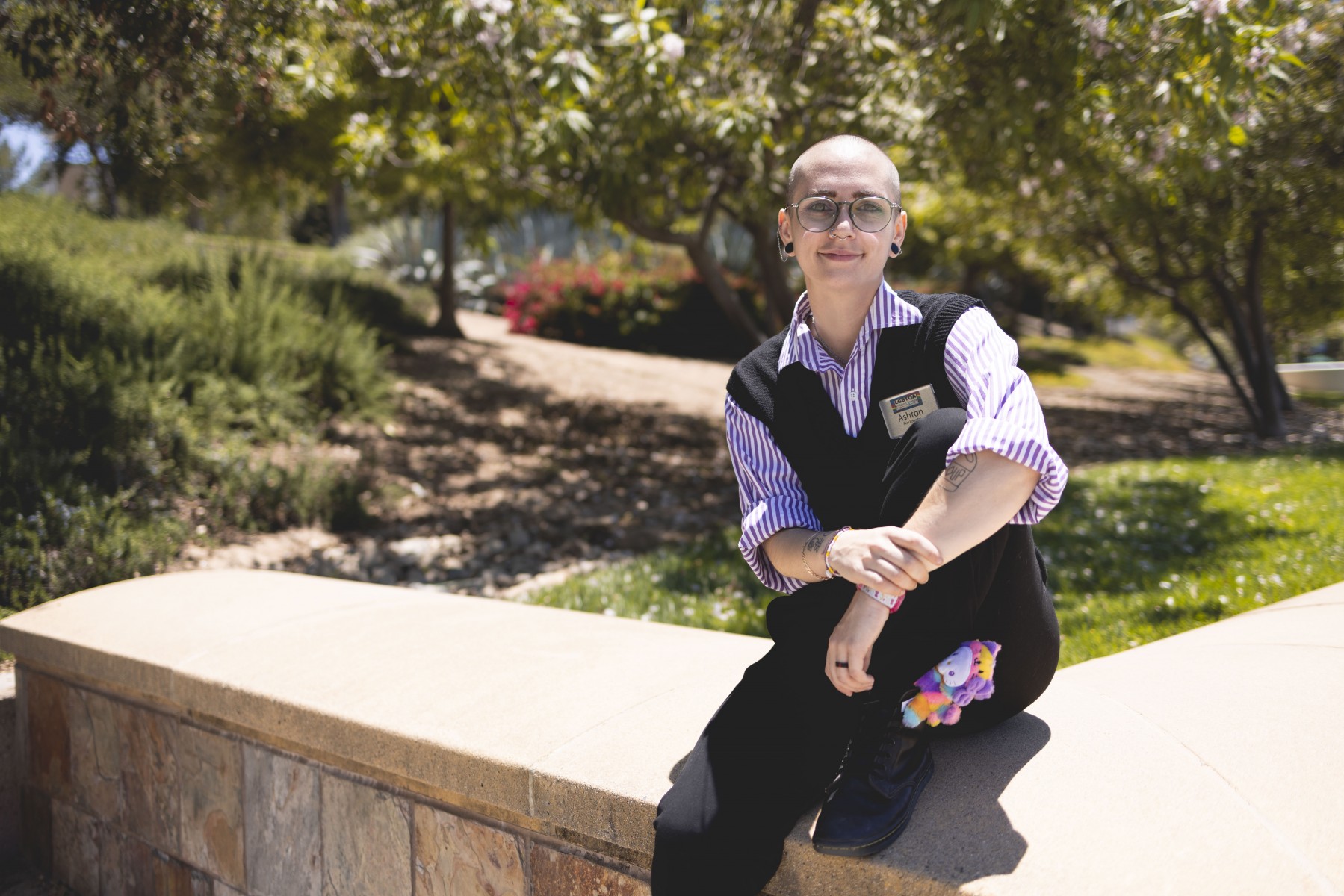 One Lawson was part of the CSUSM contingent who walked in the San Diego Pride Parade in July. Photo by Andrew Reed

To hear Reks describe their journey, it’s one of challenges instead of failures. Not roadblocks but detours.

“Sometimes it's hard for me to have faith in myself that I'm going to get to a point where I am really helping the community,” Reks said. “The moments like these are really meaningful and make me feel like I really can make a difference when I never really grew up thinking I could.”

Inspiration can come at any stage in life. What was a simple course in their first semester at CSUSM become an encounter with a mentor that forever changed Reks' career trajectory.

In addition to their work at the Pride Center, Reks also has a job as special consultant and student mentor for the Office of Inclusive Excellence on campus.

“I could not be prouder of the strong determined individual that One has become,” Aiello-Hauser said. “I learn from them every day on how to be stronger in my own identity and so I understand how our trans students look to One for guidance and support.”

An unselfish mentor and campus leader, Reks received some major recognition for their efforts a couple of weeks ago when they won the PFLAG San Diego County Mary Wagner Memorial Scholarship. It included a $3,000 award and put them in some impressive company of previous winners, including San Diego Mayor Todd Gloria.

“I'm really happy about the work that I do at school,” Reks said. “But actually being able to win money and visibility for the work that I do was definitely not something I expected. Career-wise, life-wise, I just I want to be an advocate. It’s always been hard seeing queer people, people like me with intersecting identities, you don't see a lot of variety. So being able to be queer and be trans and knowing that people who have done really great things also have received these awards, it gives me motivation, excitement and hope.”

Before Reks begins their senior year in the fall, an annual San Diego tradition will include them and a strong contingent of CSUSM students and staff.

CSUSM will be well represented in July’s Pride Parade, the Cougars first visit to the event since 2019. It will be the 14th time in the event’s history that CSUSM has been represented. A crowd of more than 300,000 spectators is expected.

It will be a great opportunity for the county to see the support system in place for the LGBTQA community on campus.

“I've been going to San Diego Pride specifically since 2014,” Reks said. “Seeing how many people in the community, how many allies there are, even though the world isn't great. And it's not always super accepting, even in North County or San Diego County, but being able to see how many people you can stand with in solidarity. I'm just so excited because it's such a good feeling. My heart just feels so good every time I’m at Pride.”

The next 11 months are sure to be filled with new adventures for Reks.  Their senior year will be full of mentoring new students while continuing to shape a life.

Graduate school is most likely the next stop, although they aren’t sure where. Qualitative research, perhaps in their role as a professor, seems to be an area where they can make a significant impact in the lives of young people.

“Representation is probably most important,” Aiello-Hauser said. “For other trans students to see how One is succeeding and to hear and learn from their journey helps them to see and feel like they can succeed as well. In each role, they have forged a path for other students to follow in their footsteps and get involved in some aspect of the Pride Center.”

Although Reks takes tremendous pride in looking at issues through a queer lens, they want to advocate for all people in the future. Breaking down barriers and strict gender roles is on the agenda.

In what surprises nobody who knows their generous spirit, Reks is focused on finding a way for everyone to feel comfortable with who they are.

“Students come in to the Pride Center, and you start seeing the difference in them,” they said. “A lot of students recently have been coming up to me, and there's a handful of queer and even more specifically trans people that tell me, ‘You were not only exposing me to the community but making me really feel like I had a place and made me understand how to make sense of how I felt about my identity.’

“So winning the scholarship and then hearing students telling me that, I don't even have words. I'm getting emotional. It's really heartwarming because you never think that you can be that for someone else.”