KIN Whiskey is more than just a clever name to Taylor Lax, a 2010 graduate of Cal State San Marcos.

Lax’s father, Bernard, started the craft spirits company three years ago in the family’s native Los Angeles, and Lax now runs the growing business with a cousin. Its signature product, KIN White Whiskey, is a modern spin on the traditional moonshine culture of the Deep South.

KIN Whiskey, which also makes a brown bourbon, has expanded to sell its products in more than 100 bars and restaurants in California, including Jeune et Jolie, a French eatery in Carlsbad. In addition to his role as KIN’s brand manager, Lax, 31, bartends at Margot in Culver City, and he shares his creative concoctions with his almost 30,000 followers on Instagram, where he posts as @the.cocktail.bandit. 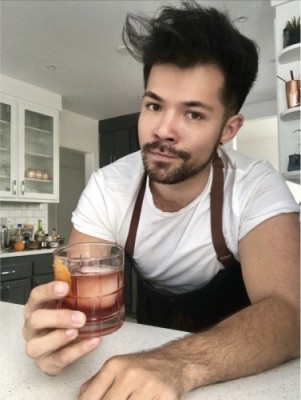 Question: As a born and raised Angeleno, how did you discover CSUSM?

Answer: I used to spend a lot of time in North San Diego County and fell in love with the area. I then toured the campus and realized what a community it was, and loved the smaller class sizes compared to the other universities I was looking at out of state.

Q: How did KIN Whiskey come about?

A: When I was growing up, my father would have moonshine in mason jars from a bootlegger in the back woods of Georgia. After a few run-ins with the law, one day he stopped cold turkey, but not before passing on his tips and recipe ideas. Fast forward a few years, when craft spirits became big, my father decided to take what he knew from this conversation and work with a small distillery in Oregon to create the product we sell today.

Q: Where do you enter the picture?

A: My cousin and I soon became the face of KIN and jumped into the industry with very little knowledge. We had to hustle and learn at the same time, and were literally selling KIN out of the back of our car once we became legitimate, with all the necessary licenses for distribution.

Q: So white whiskey is connected to the moonshine theme?

Q: What sets your whiskey apart from others on the market?

A: Our white whiskey is a unique product and has a lot of interesting notes to it, unlike a lot of other brands that are similar. Our goal was to make a product that is used in bar programs rather than a novelty gift you buy your friends that comes in a mason jar.

Q: What is your favorite cocktail to make?

A: Anything with freshly muddled produce. I love using seasonal ingredients at their freshest.

Q: What is your favorite cocktail to drink?

A: A white Negroni, which is made of gin and two French aperitifs called Lillet Blanc and Suze. I love bitter cocktails. And there’s something so pretty about a completely clear cocktail with so much flavor.