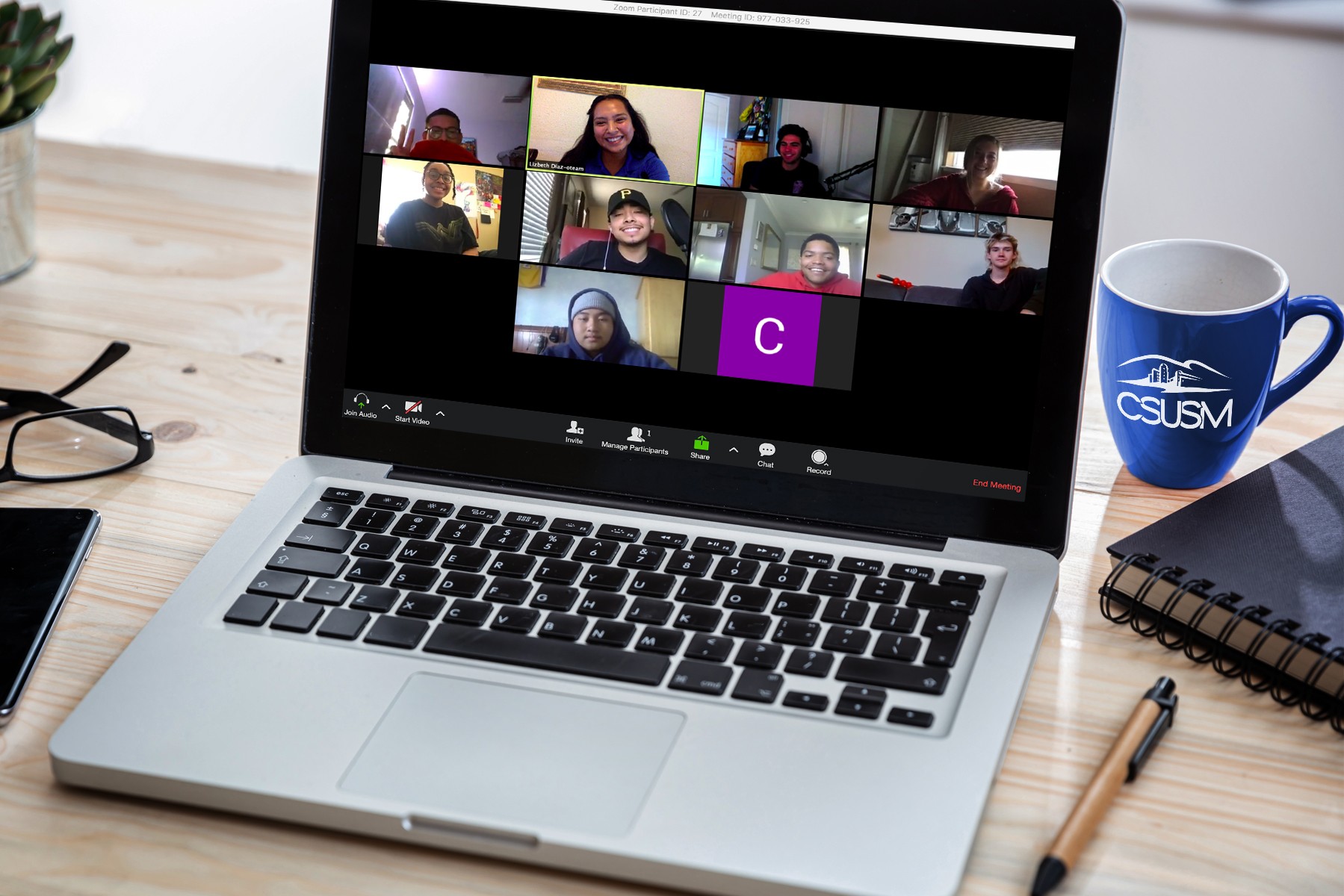 Summer orientation is taking place virtually this year because of the coronavirus pandemic. Illustration by Marcus Torres

Even under the best of circumstances, organizing and putting on summer orientation at Cal State San Marcos can feel like a herculean task. It’s easy to understand why, given that the annual program for first-year students and their families as well as transfer students involves partnerships with more than 250 campus entities.

“We collaborate and connect with literally every division of the university to make orientation happen,” said Christiana Moen, director of New Student and Family Programs, the department that’s responsible for orientation.

So imagine the reaction among the orientation staff when they found out in April, only two months before the start of the summer sessions, that orientation would be going virtual because of the coronavirus pandemic and that much of the preparation they had been doing for almost a year for the standard in-person program would need to be overhauled.

“In some ways, it really did feel overwhelming,” said Tyler Vuillemot, coordinator of new student programs.

Overwhelming, but clearly not impossible. This week marks the fifth of a new eight-week virtual orientation program that will end on Aug. 11. Each week features between two and four sessions that number as many as 300 students. As with physical orientation, the sessions are divided between first-year students and transfer students, with each one lasting about four hours. There are also sessions for families, including ones conducted in Spanish.

Following some early stumbles out of the gate, many of them attributable to technological problems, organizers say the virtual program is proceeding about as well as could be expected.

“We’ve learned along with IITS, and it has been a partnership and an adventure,” said Jason Schreiber, dean of students, whose office oversees orientation. “But it’s also consistent with what we’re hearing from other CSU campuses when we talk to them: ‘Yeah, it’s not perfect, but we’re making it work.’

“And every day something has tangibly improved. So that’s encouraging.”

The virtual orientation essentially consists of two distinct elements. First, there is a remote version of the traditional in-person session that now takes place via Zoom and Microsoft Teams, featuring a university welcome, breakouts for each of the four colleges, informational panels, and small group meetings directed by Orientation Team leaders, the collection of close to 50 students who collectively volunteer thousands of hours to CSUSM each spring and summer.

To supplement the virtual program held at specific dates and times, New Student and Family Programs contracted with a company called Go2Orientation to host a module that incoming students can complete on their own schedules. The module, with videos and text put together by various campus partners, covers all facets of student life at CSUSM, from financial aid to academic advising, campus safety to housing and parking.

“Hopefully, the new students and their family members really feel a part of what it means to be a Cougar,” Schreiber said. “I think we could have gone the easier route, but we decided that we wanted to make sure that students got to feel connected to the campus. That’s why we chose to go with a live portion and the module.”

Asked about the biggest challenges they’ve faced, Schreiber said: “I would say that it’s balancing safety and security with being accessible and customer service-friendly. We’re trying to make it as easy as possible while also minimizing the opportunity for a Zoom bombing, and that’s been the tension that we’re playing with. Also, three, four hours is a long time on a virtual platform, so making sure that it is moving along and engaging has been difficult. Fortunately, most of the presenters have brought their ‘A’ games.”

Kylee Shimono is a rising junior environmental studies major who’s in her second year as an O-Team leader. As of last week, she had participated in 11 virtual orientations this summer, most of them for transfer students.

“I was a little nervous in the beginning when we were told to transition online, but it is going so much better than expected,” Shimono said. “We’ve had a few technology issues, but we’ve gotten better with every orientation and we’ve finally found our flow. The students are responding well during Zoom sessions.”

An ancillary benefit of virtual orientation, Vuillemot said, is that students are able to get a head start on familiarizing themselves with the digital tools they will need in the fall as CSUSM offers largely remote instruction – not only Zoom but also Microsoft Teams and even campus email.

Of course, the root objective of orientation remains the same regardless of format.

“The purpose is to get students acclimated and help ensure that they feel welcomed and included in our campus community,” Moen said. “Regardless of us being in a virtual environment or in person, our core values are very connected to making sure that students can start finding their home and their niche.”

The next event for New Student and Family Programs is Weeks of Welcome, which will kick off in late August. The calendar of events will be updated on the Weeks of Welcome website and in the CSUSM app before the start of the fall semester.