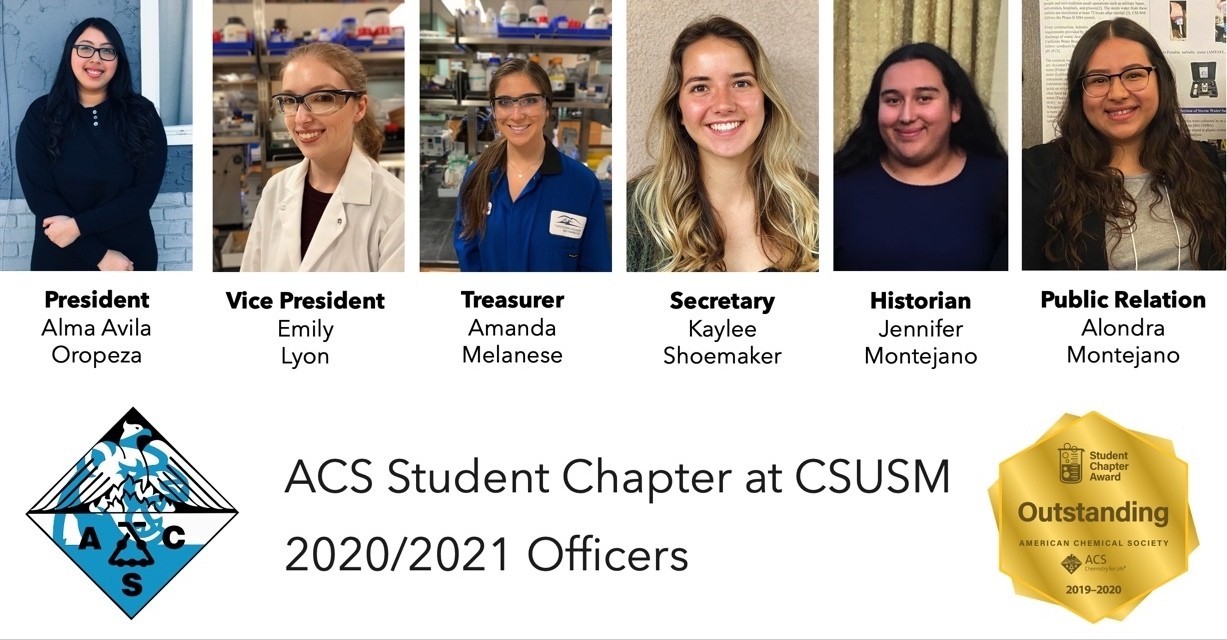 CSUSM's student chapter of the American Chemical Society was recently recognized with a distinction of "outstanding," one of about 70 in the country to receive the prestigious distinction.

That inaugural group was so impressive that it earned a student chapter honorable mention award from the ACS, which is a nationwide network of professional chemists.

Competing against collegiate chapters across the nation, the sophomore group’s year ended with another honorable mention award while the 2019-20 team took a big leap with a commendable award.

The group continues to outdo itself, recently earning the highest distinction possible – outstanding. CSUSM’s chapter was one of about 70 around the nation to earn the prestigious recognition.

“This year, particularly because there’s nothing on campus, the current officers have had the hardest task to, one, have a club at all, and two, to make it successful,” said Robert Iafe, the club’s adviser and an organic chemistry associate professor. “The six officers have done their fantastic best to keep the group cohesive and also do what they set out to do.”

ACS is a nonprofit scientific organization that was founded in 1876 and chartered by Congress. It has more than 152,000 members in more than 130 countries.

The student chapter division is a respected collaborative club that provides opportunity for chemistry and biochemistry majors to network and get involved in outreach programs. It provides a supportive environment where students can achieve their professional goals in science.

“One of the areas where academics always need improvement is, OK, you’re getting a chemistry degree, but what are you doing with it on the other end once you have this document in hand?” said Iafe, who is also the graduate program coordinator for those seeking a masters in chemistry. “The ACS Club fills that curricular gap, and what’s awesome about our student club is that it’s not only professionally driven, but they also see the value in inspiring children as young as grade school in that area as well as in outreach programs. Diversifying chemistry and creating a community of inclusion can bring amazing problem solvers from all areas of our community into the field.”

When she was in her third year at CSUSM, Alma Avila Oropeza was admittedly lost in where to steer her career path. Looking for a community to provide advice and career options, she found the campus ACS club.

Now a fifth-year biochemistry major with a minor in Spanish, she is this year’s president of the CSUSM group. She plans on obtaining a Ph.D. in toxicology in order to pursue a career as a forensic toxicologist.

“The American Chemical Society gave me many opportunities I never thought were possible,” said Oropeza, who is part of the research lab of Jackie Trischman, a professor of biochemistry and chemistry and the interim dean of the College of Science, Technology, Engineering and Mathematics. “It gave me confidence as a scientist, which eventually gave me a chance to join Dr. Trischman’s research lab on campus.”

Oropeza and her fellow officers meet once a week and host meetings for the entire student organization twice a month. They hosted a Zoom session a few weeks ago on how to apply to graduate school and held a virtual social event two weeks ago to simply check in and see how everyone is doing.

Last week, they hosted an online seminar on how to apply to summer REUs, or research experience for undergraduates.

“They’re going above and beyond the call of duty considering everything that's happening,” Iafe said. “This year is particularly exciting because all of the officers are women. It shows how crucial and important it is that women are represented in the chemical and STEM field. They’re a fantastic group.”

The average level of students becoming disinterred in STEM fields, particularly math and science, is fourth and fifth grades. Therefore, outreach to elementary school students is a large focus for the ACS club.

Super STEM Saturday, an annual event held on campus that highlights outreach toward younger future scientists, draws 10,000-plus children and parents to campus for a one-day festival each spring. The ACS club’s participation includes:

Although the 2020 event was canceled due to COVID-19 precautions, plans are underway for the 2021 version if it is deemed safe to host it in person.

Because students are not able to do outreach on campus right now, the officers felt they needed to do something special this semester. And it has become a huge success. Former ACS officer James Oakley, who graduated from CSUSM two years ago and is now in the graduate program at Princeton, teamed up with this year’s officers to form the CSUSM/Princeton “STEMinars.”

So far this semester, they have hosted three 45-minute Saturday events on YouTube where Princeton graduate students gave talks ranging from their research to how they became graduate students. The events have been so well-attended, they’re looking to continue the events even when campus returns to a standard learning environment.

“They started it this year because of the pandemic but because you don’t have to fly anybody out, your outreach is whoever wants to spend an hour on Zoom with you,” Iafe said. “It’s a way to connect a network of our current students with the upper echelon of graduate programs.”

As a freshman at CSUSM, Emily Lyon witnessed ACS officers visiting her GEL 101 class. They encouraged the first-year students to get involved in the organization by attending meetings and volunteering at outreach events.

Four years later, Lyon is a chemistry major and the ACS vice president because she wanted to mentor and encourage other students like those who came before her.

“My favorite part of being a part of this chapter is the people that I've met along the way and the memories I've made,” said Lyon, who is applying to graduate programs with the goal of eventually leading a research group at a pharmaceutical company. “I always look forward to volunteering at science outreach events like ChemExpo and Super STEM Saturday because of the opportunity to teach kids about science by doing fun experiments and demos.”