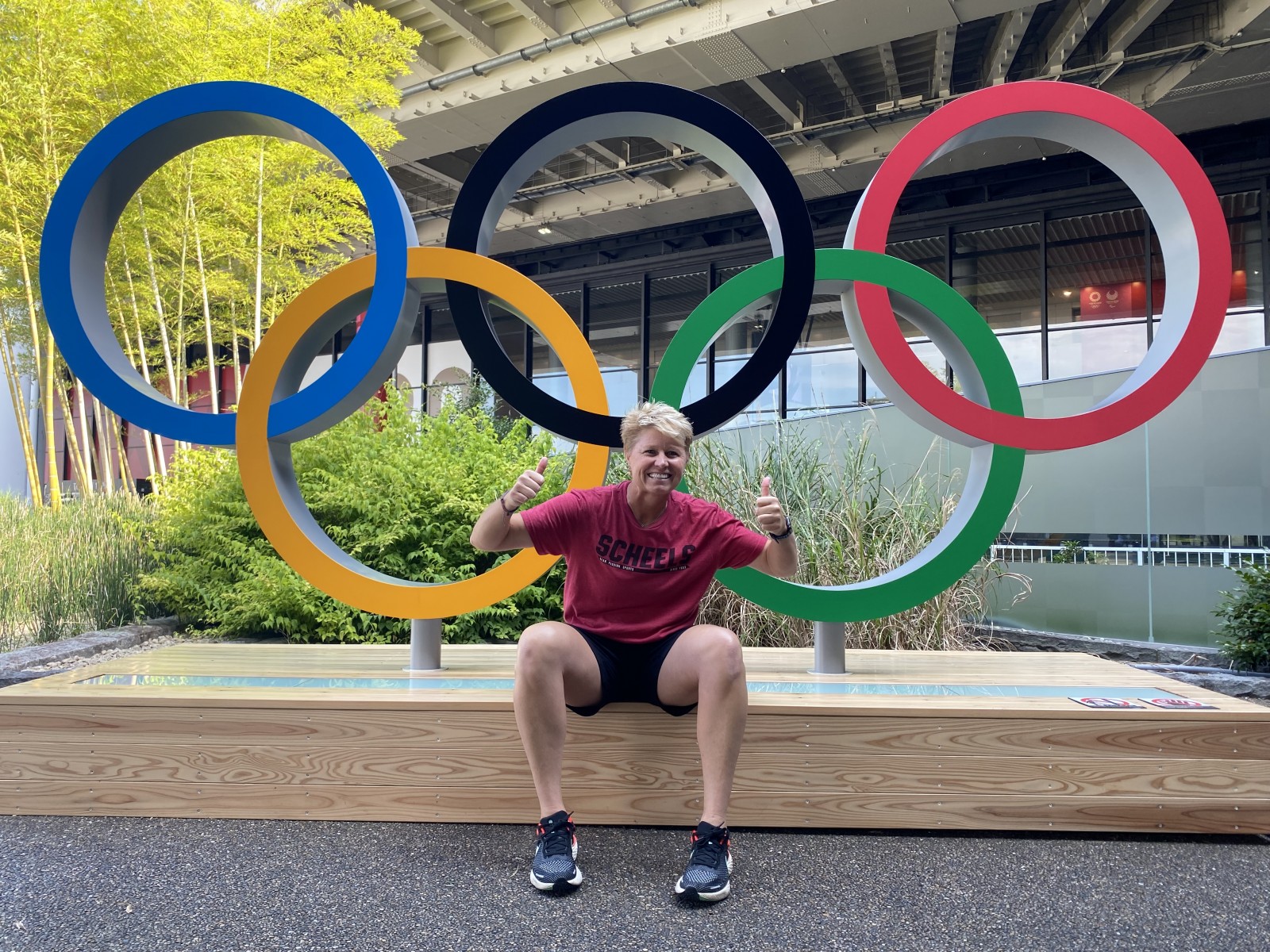 CSUSM graduate Christina Drumm has officiated numerous prestigious events during her career as a softball umpire, including the Summer Olympics in Tokyo.

Christina Drumm is no stranger to umpiring major softball events. In her 27 years as an umpire, she has officiated everything from the NCAA Women’s College World Series to prestigious international tournaments, including the World Cup of Softball.

But there’s no event bigger than the one Drumm umpired last month – the Olympic Games in Tokyo. Drumm was one of 11 softball umpires selected to work the Olympics and the only one from the United States.

It’s fitting that Drumm learned about her Olympic assignment while umpiring a game. In fact, it was during a softball scrimmage at Cal State San Marcos. The university is familiar territory for Drumm, who earned a bachelor’s in kinesiology and master’s in public health at CSUSM.

Drumm recently returned from Tokyo and shared her thoughts on her Olympic experience, her umpiring background and how some of the lessons she learned at CSUSM have helped her officiating career.

Question: When did umpiring the Olympics become a goal for you?

Christina Drumm: It was always a hope when I started working at the international level, and then softball was eliminated from the Olympics after 2008. When Tokyo announced that softball and baseball would be added in as exhibition sports in 2020, I felt that it was a realistic goal starting in 2016.

Q: How did you learn that you had been selected as an umpire for the Olympics?

CD: I was training and umpiring a scrimmage softball game at CSUSM. A good friend in the Athletics Department had seen other umpires had announced they had been selected. She was able to get some information and handed me a rolled paper between the fence when I was between innings. I opened the paper up, read the first few sentences that announced I was selected for the 2020 Olympic Games. I rolled the paper back up, handed it back to her and had a big smile on my face along with a lot of emotion running through me and went back to umpiring. Of course, there was a lot more celebrating later.

Q: What was the highlight of the Olympics and what, if anything, about the experience surprised you?

CD: How organized and collaborative the Japanese were from the time I got off my flight to when I left the airport and headed home. The process of verifying prior COVID tests to verifying paperwork and applications on phones to taking a COVID test at the airport with hundreds of people coming off plane 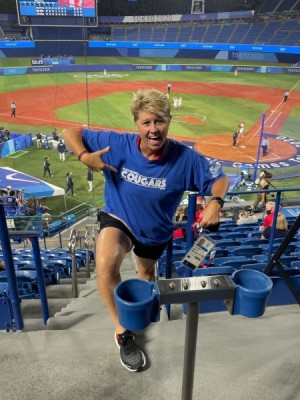 s was efficient. The Japanese who volunteered and/or worked the event were friendly, helpful and seemed very excited to be part of the event.

Q: How was the Olympic experience different from other high-level international competitions where you’ve been an umpire?

CD: The Olympic experience is closely monitored, daily COVID testing, not allowed to leave the hotel and no fans in the stands. The on-field experience was the same when calling balls, strikes, safes and outs.

Q: What inspired you to pursue umpiring?

CD: I started umpiring after college to earn extra money and I really enjoyed the experience – the camaraderie of the umpires, being able to teach/train and give back to the umpire community, and the interaction of the players, coaches and fans at all levels. It has become a passion hobby ever since.

Q: How did you decide to attend CSUSM?

CD: It was a university that was close and had smaller class sizes in my major. I felt it was a good fit.

Q: What made you decide to pursue a bachelor’s in kinesiology and an MPH?

CD: I love teaching and being active. Kinesiology has disciplines that can allow me to merge those together.

Q: Did you have any involvement with the CSUSM softball program while you were at the university?

CD: Not really. My local association will partner with the team to conduct some training for the umpires, which allows game situations for the team. I was able to invite the CSUSM softball team to have an exhibition game against the Olympic team before COVID shut things down. It was a great game to watch.

Q: Are there any lessons learned from your time at CSUSM that apply to your umpiring?

CD: Absolutely. Collaborating with diverse individuals is very important in both roles. I continued to work on my leadership skills when working with groups to achieve goals and the desired final product.

Q: Is there anything else from your Olympic experience or your time at CSUSM that people should know?

CD: My Olympic experience was very different from other Olympics, but it still was an amazing event. The teams played so competitive and cheered so loud that it felt like there were fans there. Being part of the bronze-medal game was extremely special.

I continued my education at CSUSM because of the support of the faculty; they are vested in students’ success. I had great professors who took time to apply all the new concepts to real-life situations so a graduate could leverage that information to improve community health. 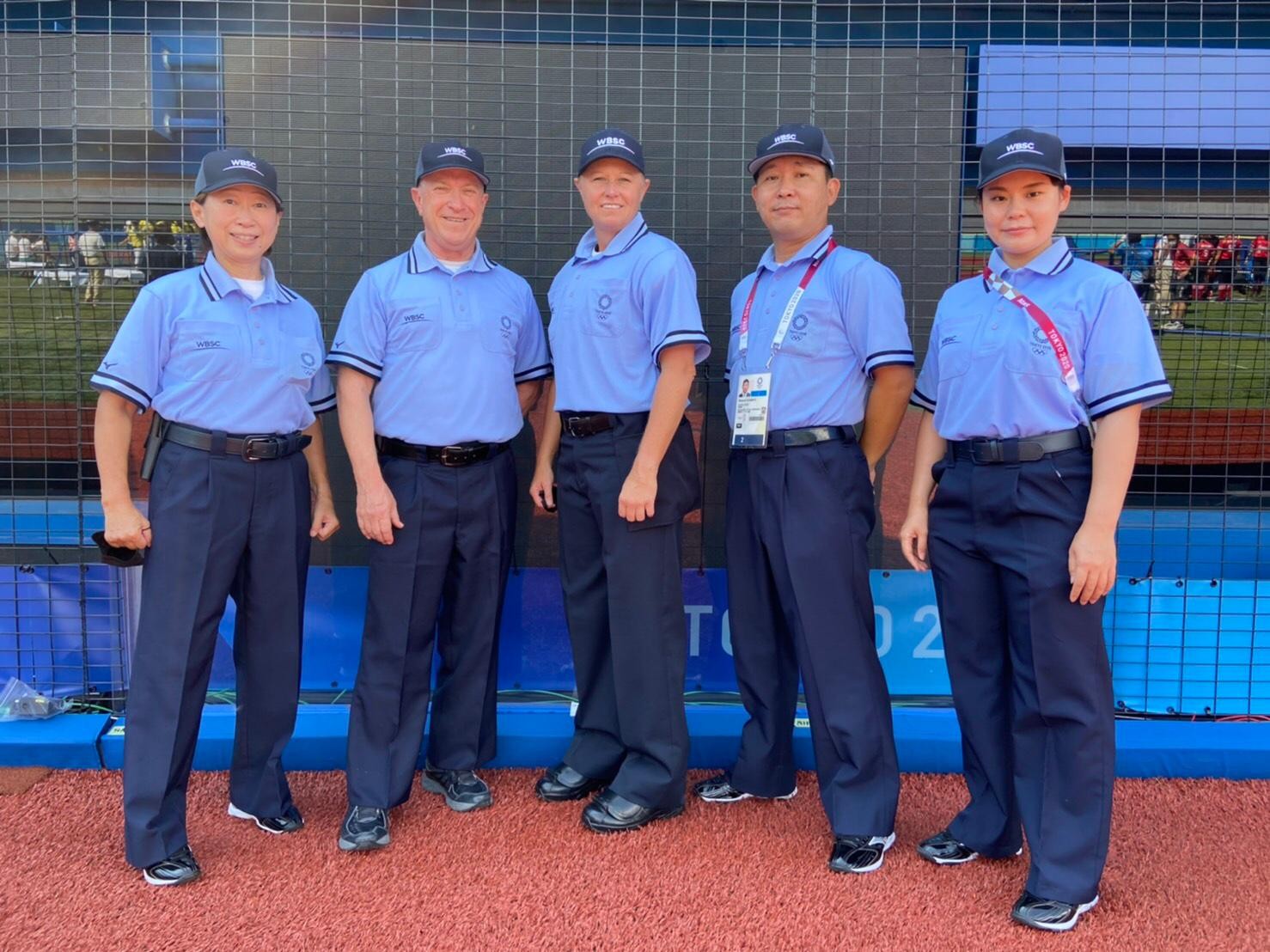 CSUSM alumna Christina Drumm (center) was one of 11 people across the globe selected to serve as a softball umpire at the Summer Olympics in Tokyo.