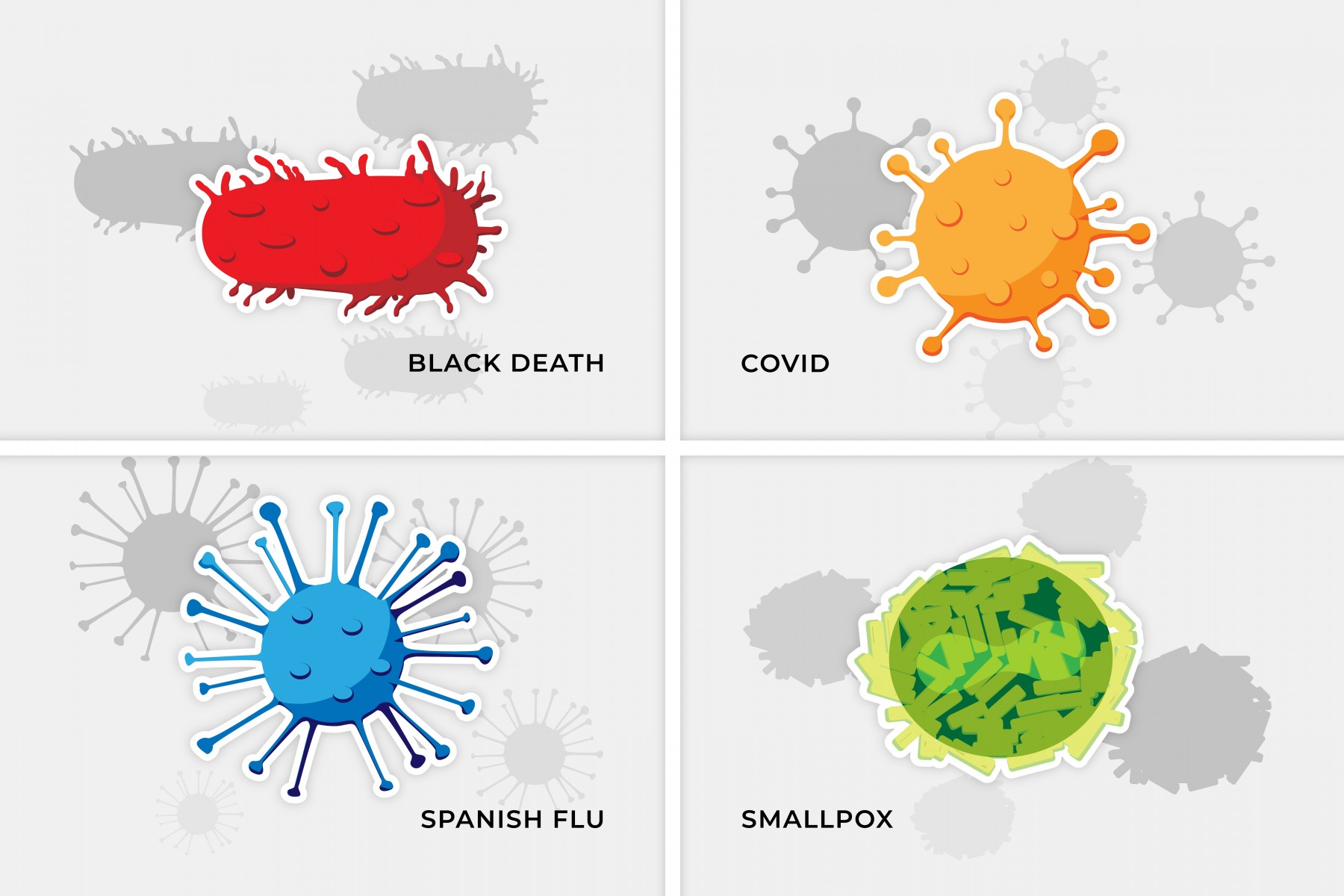 Historic pandemics that offer lessons for the current one include Black Death, Spanish flu and smallpox. Illustration by Saira Rivera

As a professor of Middle East history at Cal State San Marcos, Ibrahim Al-Marashi might seem like an unlikely candidate to have a deep and abiding interest in the coronavirus.

But ever since the epidemic became a pandemic early this spring and began to hijack almost all aspects of daily life around the world, scholars of every stripe have found applications to their chosen area of study, and Al-Marashi is no exception. He has written at least a half-dozen research papers or op-eds related to the pandemic, with titles as wide-ranging as “The Geopolitics of the Coronavirus Outbreak,” “COVID-19 and the Middle East’s ‘Cold War,’ ” and “Pandemics Incubate Other Viruses Like Racism.”

In terms of COVID-19, one of Al-Marashi’s primary goals is to try to place the disease and its myriad effects into the proper historical framing, which he does by way of an arcane field called clio-epidemiology.

Question: What is clio-epidemiology, and why does it interest you?

Ibrahim Al-Marashi: We academics love to use obscure terms for simple phenomena, but clio-epidemiology can be most succinctly defined as the history of disease. This field provides context to better understand our present during the coronavirus outbreak.

Q: Have you taught the concept in your classes before? How that will change or broaden because of COVID-19?

IA: Before COVID-19, it was difficult to get students interested in clio-epidemiology. For example, after giving a lecture on how smallpox eradicated Native American populations or how it was eliminated during the Cold War due to the cooperation of the U.S. and USSR, I would not see any hands raised. I would then remind them, “You might not be interested in viruses, but viruses are interested in you!”

Q: Have students shown more interest in the subject since COVID, or do you think they will this fall?

IA: Absolutely. Since the pandemic, the interest in clio-epidemiology has surged.

Q: In one of your papers, you write about lessons from three historic pandemics – Black Death, Spanish flu and smallpox – that can be applied to this one. Let’s start with the Black Death of the 14th century. What are the lessons from that?

IA: The Black Death, the Spanish flu and smallpox are just a few examples that provide valuable historical understanding of how states and societies responded to pandemics, furthering our understanding of the COVID cultures that are emerging in 2020. It is often said that COVID-19 will lead to the end of globalization. Globalization is not a process that simply begins and ends. Saying that globalization will end is like saying that the weather will end. The Black Death of the mid-1300s spread rapidly due to a globalization linked to a pax-Mongolica. The Mongols ushered in an integrated trading network. It allowed someone like Marco Polo to travel from Venice to the Mongol capital unmolested. It also allowed the bacterium that caused the Black Death to do the same.

Q: What are the lessons from Spanish flu?

The need for transparency is paramount, reflected in the name of the 1918-1919 “Spanish flu” pandemic, which was avian in origin, infected half a billion people worldwide, and killed 50 million of them, much more than the war that preceded it. The reason for its name is not because it originated in Spain, but as the nation was not a party to World War I, it did not have a wartime censorship regime in place, whereas other nations censored the news of the pandemic. The World War is a partial reason why the flu spread around the world, with mass movement of soldiers and wartime material causing global spread that would not have occurred in peace time. Whether it is the Chinese or American government, both need to allow scientists to communicate freely with the public, without politicization impeding this communication.

Q: What are the lessons from smallpox?

IA: That diseases can be eradicated when the nations of the world cooperate. From 1966 to 1977, a global vaccination campaign under the auspices of the World Health Organization (WHO) eradicated smallpox from the planet in one of the greatest public health achievements of the 20th century. The lesson for the U.S. today is that it needs to cooperate, not confront China, and continue to fund the WHO. The Trump administration has neglected to do both.

Q: You’re an expert in Middle East history. How has the pandemic affected that region, both in terms of public health and culture/society?

IA: Iran was the where the epidemic broke out in the region. Sanctions imposed by the Trump administration that targeted humanitarian trade with Iran have hurt the Islamic Republic’s ability to deal with the outbreak.

The Iraqi government has found itself dealing with its greatest governance challenge since the ISIS invasion of 2014. The coronavirus has hit Iraq’s economy and placed additional stress on an already strained medical infrastructure. Iraq’s public health sector has been undermined by the sanctions that began after 1991, and the effects of depleted uranium from the wars in 1991 and 2003. The collapse of the state in 2003 exacerbated the decline of the health sector, already eviscerated by the United Nations-imposed sanctions. Afterward, Iraq suffered a flight of its educated professional middle class for years, especially doctors, fleeing to Europe or the U.S. The brain drain had dire ramifications as the Iraqi Red Crescent estimated that about 50 percent of Iraq’s doctors and 70 percent of medical specialists left in the exodus. Hospitals and clinics had been degraded by war, insurgency and violence.

The pandemic hit Lebanon while it was dealing with an economic crisis that emerged when it defaulted on international loans. Syria and Yemen are in a state of civil war and will suffer the challenges posed by COVID. All three suffer poverty, which the virus thrives in. Middle Eastern conflicts, particularly between Iran and Saudi Arabia, have also hindered collective biosecurity.

Q: How you do think history will judge the public response to this pandemic, both worldwide and in the U.S.?

IA: Poorly. The new coronavirus is a problem that is global in nature, which requires political solutions and transparency, based on international cooperation on the multinational, national and local level. This cooperation did not occur. 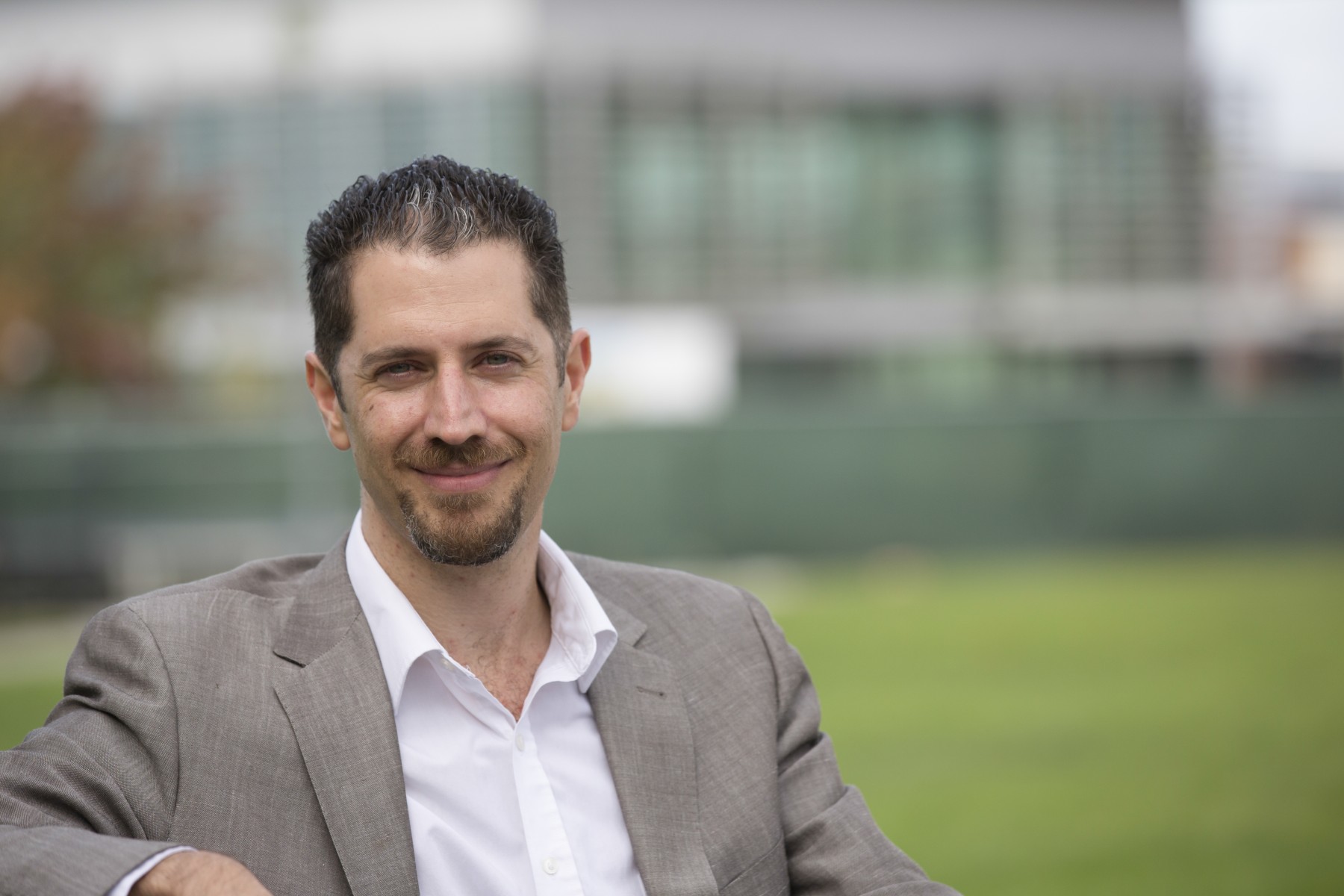 CSUSM professor Ibrahim Al-Marashi is interested in an obscure field called clio-epidemiology, or the history of disease.