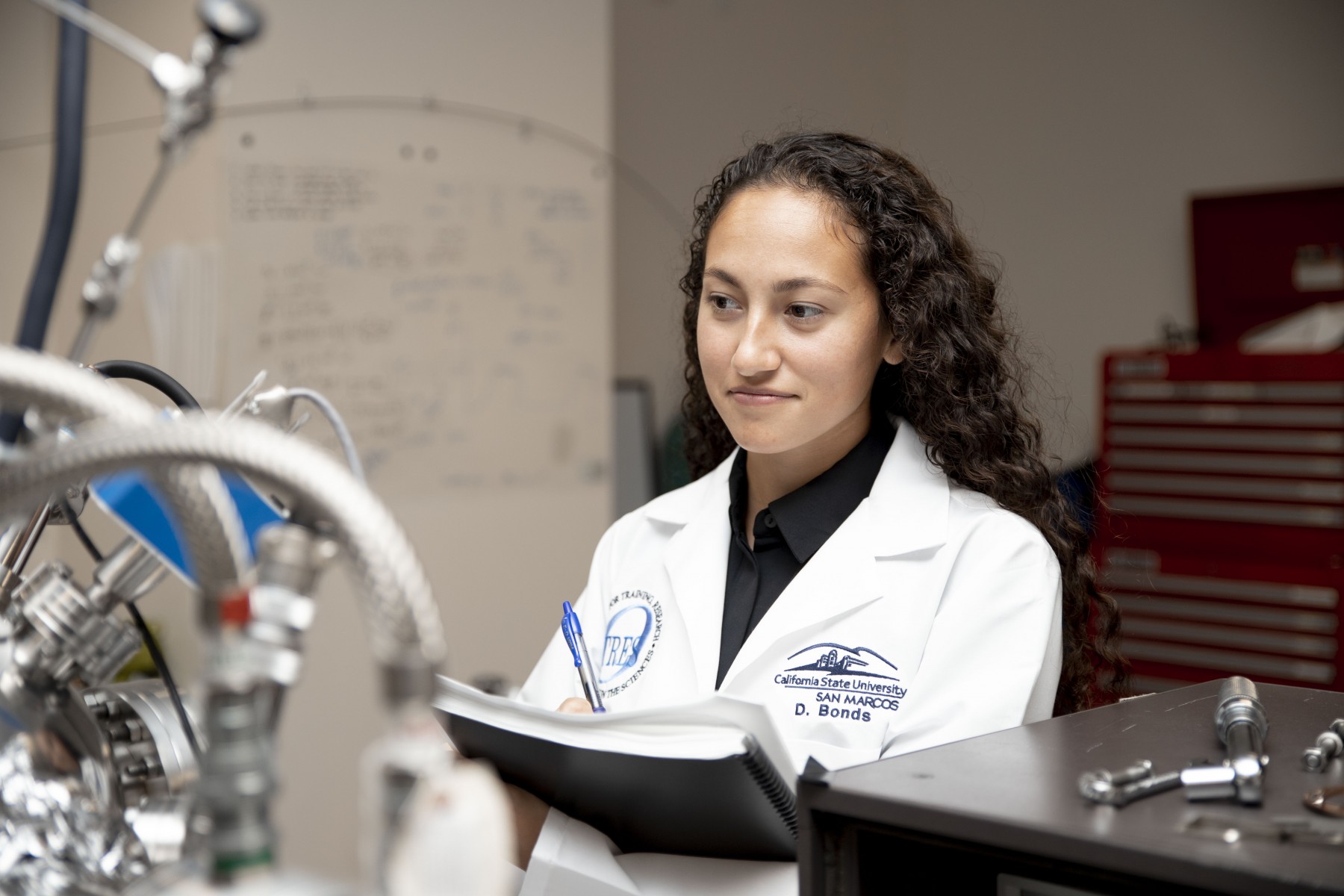 Physics student Daria Bonds is one of just two undergraduates working in the lab of Gerardo Dominguez this year. Photo by Andrew Reed

Sally Ride inspired a generation and beyond to pursue one’s dreams no matter the obstacles.

The first American woman and youngest American in space, Ride made her journey into history on June 18, 1983 as a crew member aboard the space shuttle Challenger STS-7.

About 25 years later, she inspired a fourth-grade girl from Escondido to pursue some science dreams of her own.

“I have always been interested in learning about physical science,” said Cal State San Marcos physics senior Daria Bonds. “I met Dr. Sally K. Ride at the San Diego Air and Space Museum when I was in fourth grade. Seeing her talk about being a physicist, an astronaut and steward of the environment was inspirational.”

That chance meeting, which came a few years before Ride died following a brief battle with pancreatic cancer, started Bonds on a science path that has led her to becoming CSUSM’s current Society of Physics Students (SPS) president.

As if being a physics major and campus leader didn’t keep her busy enough, Bonds is a runner on the cross country team. While continuing to improve her personal bests each season, she earned CCAA All-Academic honors in 2019 and ’20 and captured the Big Blue Award three times – fall 2019, spring 2020 and again in fall 2020.

“I enjoy running and working out to maintain a mind and body balance,” said Bonds, who joined the cross country team at the same time as her brother David, who is a CSUSM junior majoring in software engineering. “I appreciate the leadership course that my coach Torrey Olson created to support student athletes developing leadership skills and positive team culture.”

Gerardo Dominguez is an associate professor of physics at CSUSM. He has worked extensively with Bonds as she is one of just two undergraduate students working in his lab this year. He is not alone in his reaction to Bonds being a collegiate athlete while studying physics. The science/running combination literally runs in the family as her other younger brother is planning on studying STEM at CSUSM next year and running cross country as well.

Coincidentally, before Ride became a trailblazer in so many ways, she was a top juniors tennis player, even dropping out of college briefly to pursue a tennis career before returning to Stanford to earn two bachelor’s degrees, a master’s degree and a Ph.D.

“It is impressive for any student to maintain the GPA that Daria has achieved as a physics major,” Dominguez said. “To do so while being a Division II athlete is very impressive in my opinion. Daria does her homework, comes prepared to meetings and pays attention to the details of her work. She asks great questions, asks for help when she needs it and communicates well. She is mature and committed and a joy to work with.” 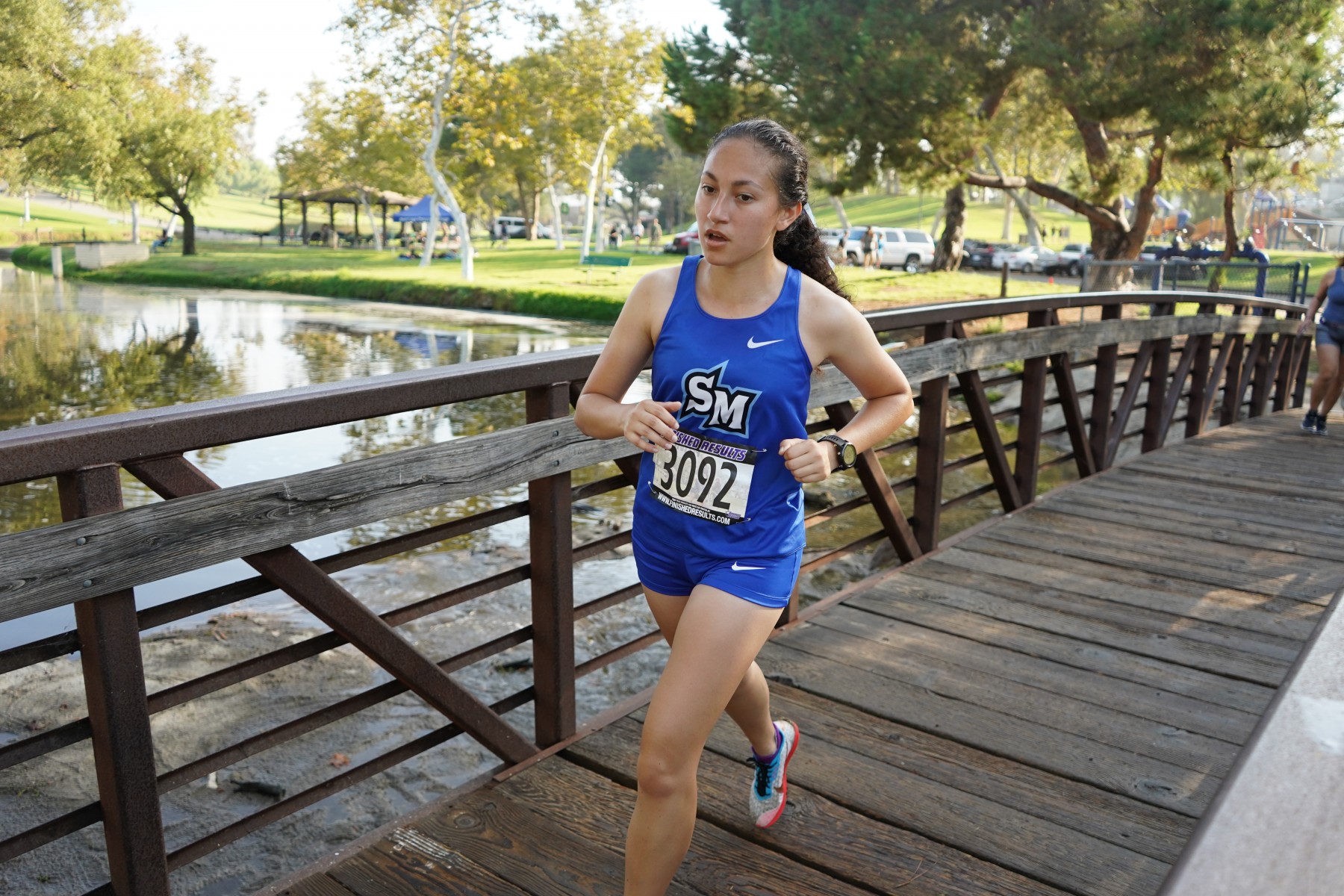 Physics student Daria Bonds also is a member of the women's cross country and track teams.

To prepare for her senior year and beyond, Bonds participated in a summer research program at Caltech.

Her research project concerned the study of outflows of material from the disks of galaxies, analyzing sophisticated computer simulations of galaxy evolution to determine the direction of those outflows within the composition and structure of the CGM halo regions.

“I had a wonderful time at CalTech (last) summer being surrounded by driven scientists and kind people,” said Bonds, who will also graduate with a minor in math. “I learned so much about my field of interest – astronomy and astrophysics. I made memories with other undergrad students exploring the L.A. area and memories with my lab group analyzing new data.”

In the spring, Bonds plans on bringing back Rocket Car Races with the SPS chapter. After the difficulties of being isolated during the pandemic, she is proud of the study and socialization opportunities she has helped create so far this school year.

She is also the president of the Women in Physics organization on campus. It’s easy to see her future is headed toward making a positive impact on the world.

Much like the hero she met in fourth grade.

“I want to be an advocate for science education and encourage other students from underrepresented backgrounds to pursue studies in STEM,” Bonds said. “I’m looking forward to competing during the spring track season. I also plan to continue to run on my own time after I’ve graduated.”

For now, that means pursuing a Ph.D. program in astrophysics to do computational and theoretical astronomy research.

“I’m really happy for her to come out of being an undergrad and understanding what Ph.D. level research at a top R1 institution entails,” Dominguez said. “Beyond that, I think Daria will chart her course, do the homework and be successful. I’m excited to see how she develops as a scholar and I look forward to seeing her publish her first authored papers in a few years, maybe even sooner. Honestly, I find her inspirational.”

Students from Cal State San Marcos will present and pitch their entrepreneurial ideas during the CSUSM Quick Pitch Competition on Wednesday, Dec. 8 from 6-8 p.m. at the newly opened Innovation Hub on …
Read more
NewsCenter