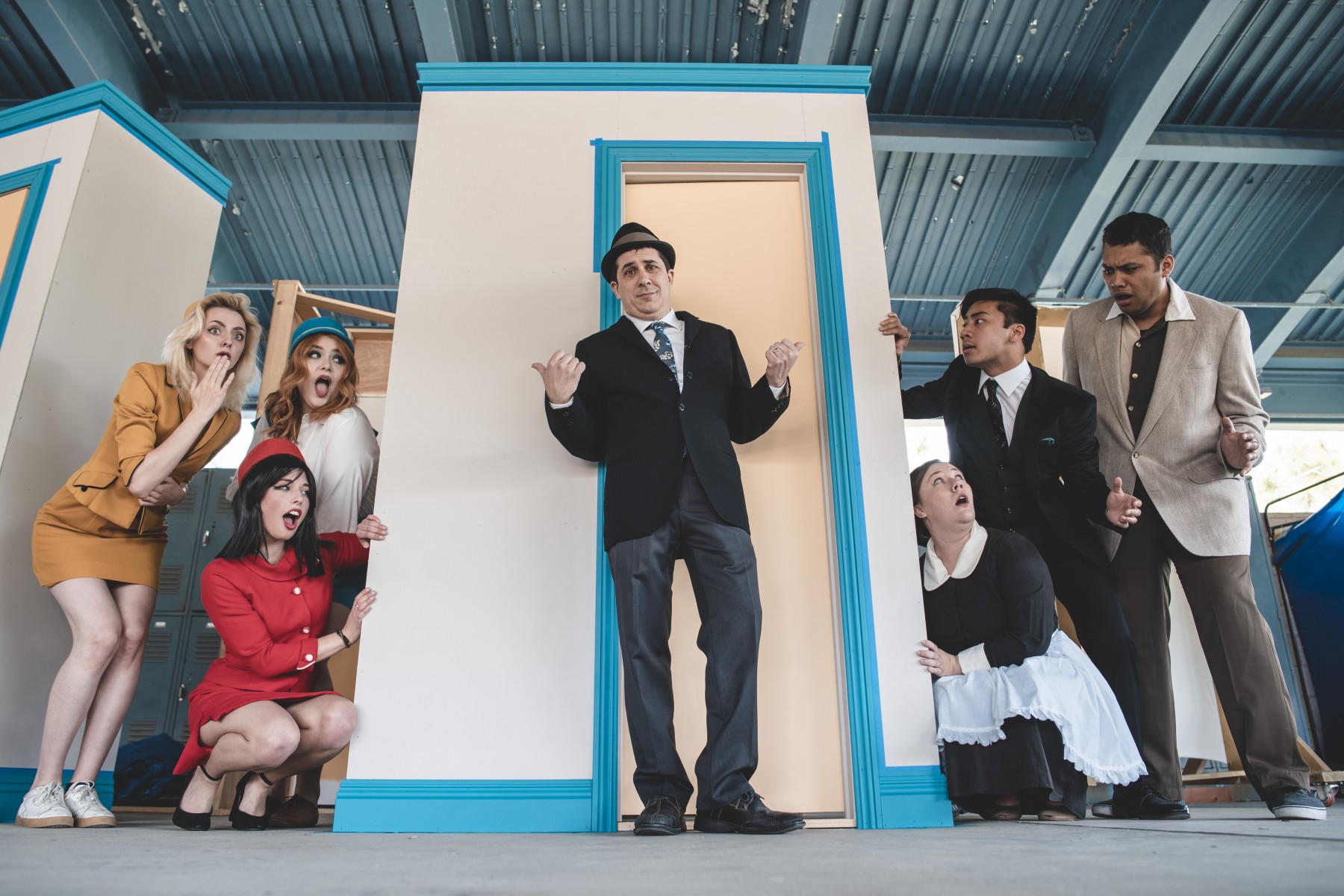 Boeing Boeing
The curtain rises on “Boeing Boeing” with a 7 p.m. show April 17. It runs all weekend with the finale at 7 p.m. April 20. All shows are at CSUSM in the Performance Hall (Arts Building 111). Tickets range from $8-$10 and can be purchased online or at the door if available. Photo by Alan Brown

Three years ago, the Cal State San Marcos theatre program reached out to Jason Eberwein to direct a show.

He had been part of a handful of productions on campus, but he wanted to present a show that would speak to the strengths of everyone involved. He knew the power of his potential cast would come from females, so that began to narrow his selection down. His preference as a director is building character, so he wanted a show with a small cast. And he was strongly leaning toward producing a show with farce, which uses comedy in highly improbable situations with exaggerated characters and scenes.

“Being that this is a college production, I saw a lot of opportunities for the actors to grow in their abilities but also to be exposed to things that they may have not in their classes or other shows before,” said Eberwein, who has directed 10 shows in his career while being a part of six productions at CSUSM. “I enjoy farce as a genre because it is not your typical comedy. There is something about the improbable absurd situations that is very similar to other genres I enjoy. I wanted a show that could bring a crowd. And it's just plain funny.”

The curtain rises on “Boeing Boeing” with a 7 p.m. show April 17. It runs all weekend with the finale at 7 p.m. April 20. All shows are at CSUSM in the Performance Hall (Arts Building 111). Tickets range from $8-$10 and can be purchased online or at the door if available.

Written by French playwright Marc Camoletti and translated to English by Beverly Cross and Francis Evans, the show follows swinging bachelor Bernard (played by Edrick Agustin) in his flat in 1960s Paris. Bernard is simultaneously engaged to three gorgeous women – Gloria (Esther Martin), Gabriella (Madison Atchley) and Gretchen (Fran Partlett) – who are all flight attendants and don’t know the existence of each other. Bernard’s life begins to fall apart when his friend Robert (Jacob James) visits and a new, speedier Boeing jet completely messes up his planning. To top things off, the three women arrive in Paris simultaneously.

Casting a show is a challenge for every director, but this group of actors immediately bonded while being challenged to develop French accents.

“In this case, I feel like I struck gold,” Eberwein said. “I couldn't be happier with this cast. They are wonderful. Each of them has really impressed me in different ways. And what's best is that we have a really close cast bond. Sometimes it actually makes it comical in rehearsal since they are such good friends with each other. They really have to stay in character to make sure that their good friend isn't making them laugh at all the crazy fun that goes on in this show.”

Sheradyn Luro plays the role of Bertha, who is Bernard’s French housekeeper. The fourth-year theatre major was seen most recently in “Women at War” here on campus.

“I have learned so much during this show and grown so much as an actor,” Luro said. “Being able to play a character with an accent is something I’ve been wanting to do for a while, so I’m stoked to get the opportunity in this show. It’s been the best getting to collaborate with our director and many of my good pals on this hilarious show.”

Eberwein is a web developer in CSUSM’s Instructional & Information Technology Services department. Theatre department chair Judy Bauerlein brought him in as an assistant director for the New Play Festival in 2011, and he has been working with the theatre department in various capacities ever since. He’s now the co-faculty staff adviser for the newly created student theatre club.

The process of creating “Boeing Boeing” has been just as fulfilling as the soon-to-come end product.

“We started rehearsals the first week of the semester mostly because I knew that I would be having a baby some time during the process, and I had planned on taking two weeks away from the production,” said Eberwein, who just welcomed baby boy Gabriel in March, his second child. “But the other benefit of the longer rehearsal process is that we got to do some great exercises to bond, find our characters and explore the world of this show. Also, since the ladies all have accents, this gave us the opportunity to make them as natural as possible and to use them as a tool to tell our story and to find some, well a lot, of comedy.”

“Boeing Boeing” runs from April 17-20. All shows are at CSUSM in the Performance Hall (Arts Building 111). Tickets range from $8-$10 and can be purchased online or at the door if available.