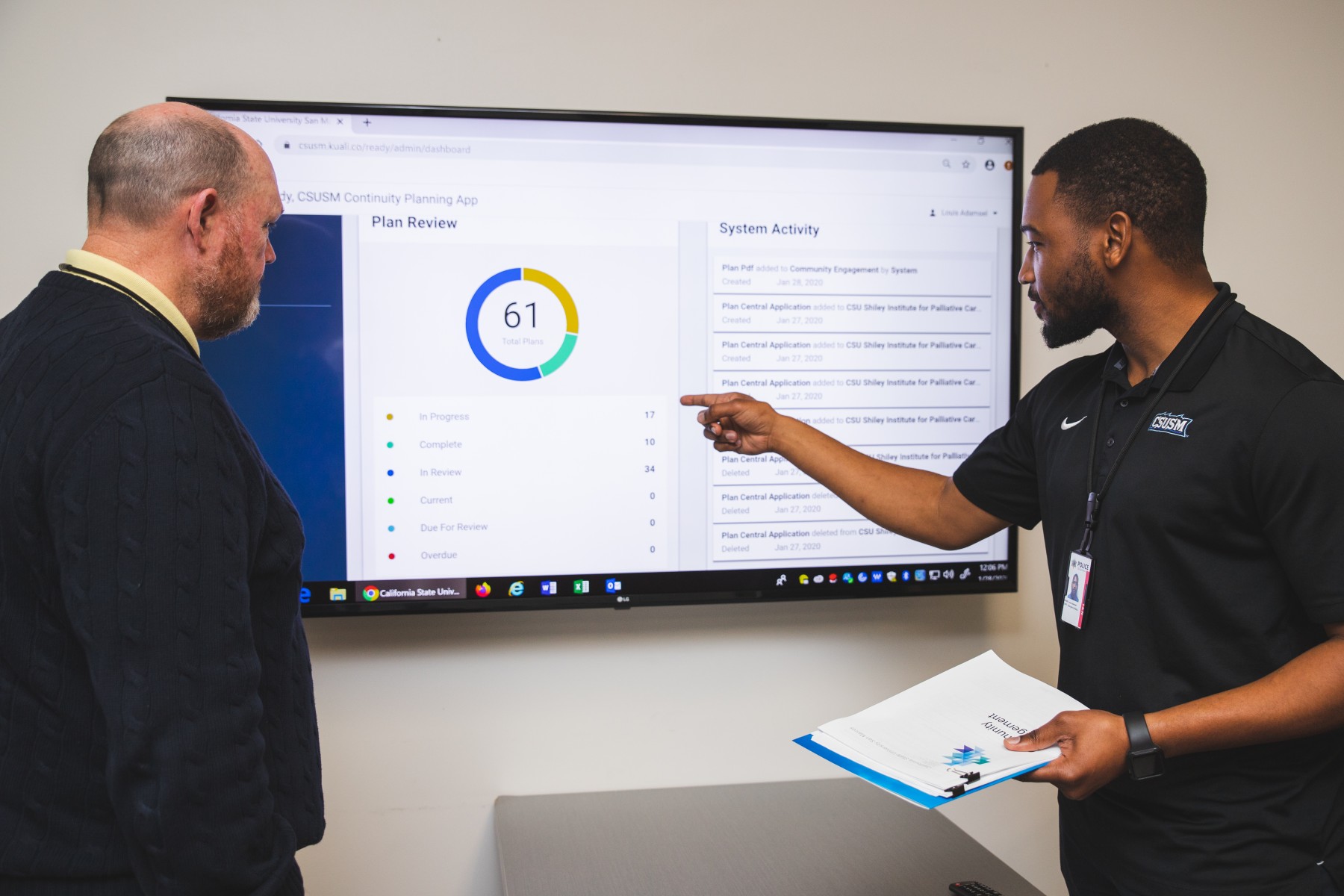 Robert Williams (left), CSUSM’s emergency and business recovery manager, and Louis Adamsel, the business continuity coordinator, help to ensure that critical business functions will operate during and after an emergency or disaster. Photo by Alan Brown

Take a walk around an institution of higher learning, and you’ll witness students, staff, professors and deans either lost in thought or interacting about something important. The last thing campus community members want to think about is what would happen in a catastrophic event.

At Cal State San Marcos, they don’t need to.

The campus’ Business Continuity Program ensures critical business functions will operate during and after an emergency or disaster. And very soon, a new software program called Kuali Ready will be rolled out to even further advance CSUSM’s efforts to respond when disruptive situations occur.

“Any event that results in a disruption of business can affect the university’s ability to provide services,” said Robert Williams, who is CSUSM’s emergency and business recovery manager. “Continuity gives you a strategy on how to lessen those disruptions and get the campus back up and running as quickly as possible.”

The largely behind-the-scenes effort has been around for eight years at CSUSM. With more cyberattacks, planned and unplanned power outages, and the constant threat of devastating fires, regional businesses have identified an increased need for continuity during disasters.

What began on campus as an Excel spreadsheet that simply identified needs during and after a disaster has blossomed into an intricate system of communication and technology across all departments.

One of the people spearheading the rollout of the new software program is a familiar face around campus, Class of 2018 alumnus and former ASI President Louis Adamsel.

“We saw an opportunity to bring in a person with maturity, drive and a willingness to learn,” Williams said. “He has not disappointed. He’s still learning on a daily basis, but he has taken the lead on our Business Continuity efforts and is making great strides.”

While an undergraduate student at CSUSM, Adamsel majored in communication while working on campus, volunteering with several organizations and serving as a National Guard reservist. He was also instrumental in bringing historically black fraternity Omega Psi Phi to campus.

He uses all of that experience gained at CSUSM in his new role as Business Continuity Coordinator.

“My experience in leadership has allowed me to realize it is important to meet departments where they are and steadily work from there,” said Adamsel, who is also currently a graduate student in the Homeland Security program at San Diego State. “If I can research as much information about the departments before a meeting, our meetings are able to go smoothly. And even if we start from nothing, just the excitement of working through Business Continuity is enough. Many department members appreciate the initiative to figure out their own critical functions and have a better understanding of their role in an emergency situation.” 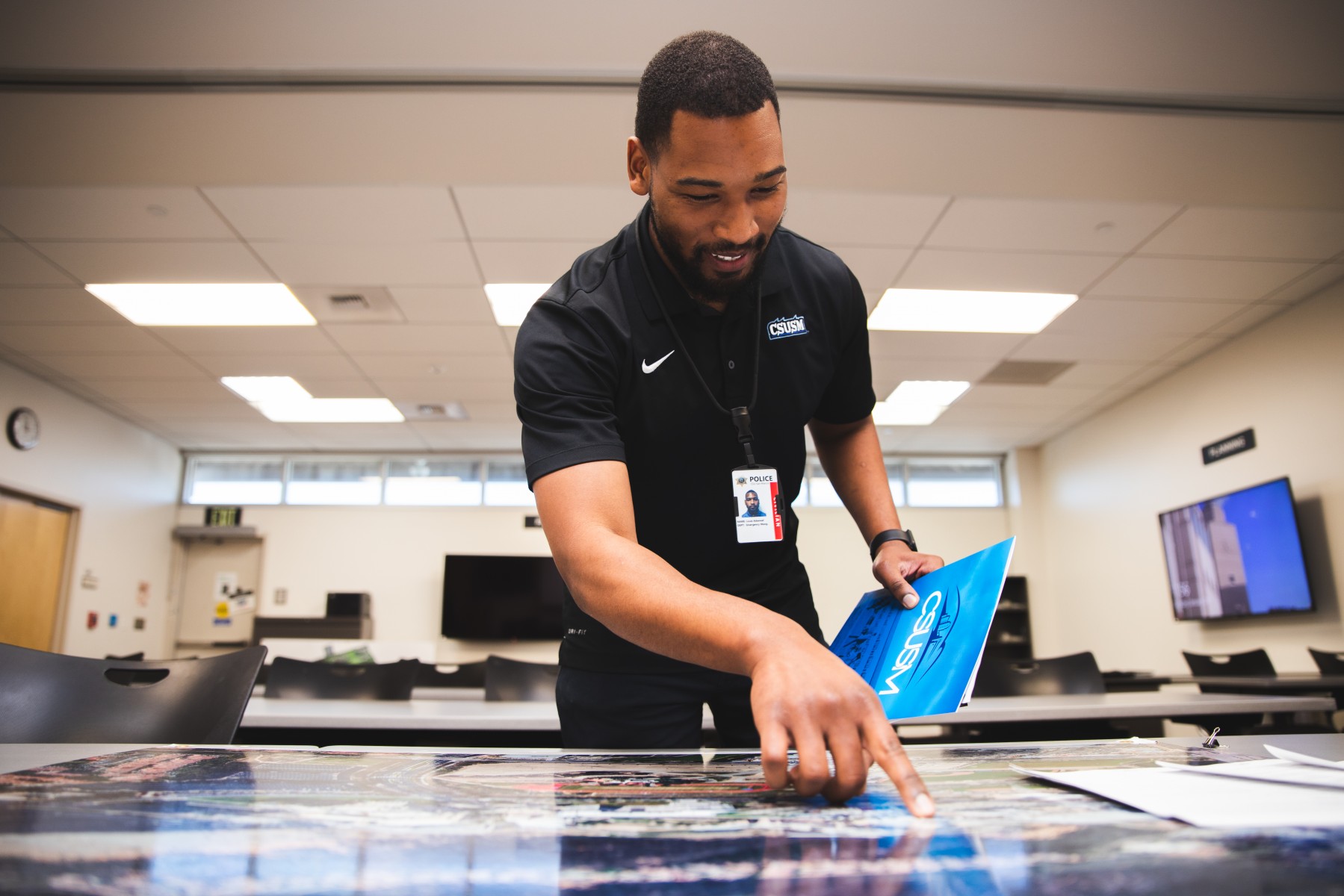 The day-to-day focus of Business Continuity Coordinator Louis Adamsel, a 2018 CSUSM graduate, is on communicating with division and department leaders about the benefits of working together to identify critical tasks and functions that must be carried out and the time frame in which to do that. Photo by Alan Brown

Adamsel’s day-to-day focus is on communicating with division and department leaders about the benefits of working together to identify critical tasks and functions that must be carried out and the time frame in which to do that. He also identifies the location, resources and IT needs of each department so they can be utilized in the case of an emergency.

The new program will soon be steadily rolled out with information sessions through division and department leadership. BCP is set to begin the information process and help departments finish plans for their respective areas if departments wish to reach out now.

One of the main benefits of Kuali Ready is it allows for more information to be recorded from each department as well as stores key departmental documents that can be accessed on computer, tablet or mobile devices.

“This new software program will allow the Emergency Operations Center to quickly identify specific departmental needs that may be affected during an incident,” Adamsel said. “Inside every continuity plan is a contact list for departments, and the critical functions serve as guidelines for the department in the case of recovery. So in the case of campus recovery, most departments will see where they stand and know exact timelines on how they will be assisted by the university if they have a task that cannot be carried out inside the department.”

The BCP has made significant strides since it rolled out a program on paper just eight years ago. Combining the advancements in technology with some key minds who are dedicated to making CSUM as disaster prepared as possible has clearly been the right approach.

“Louis has been invaluable to me and the program,” Williams said. “Business Continuity is a full-time job – especially when moving from paper plans to automated system – and prior to Louis, too much work for one person. He jumped right in absorbing as much information as quickly as possible, picked up the Kuali software quickly, and is constantly researching and asking questions to improve the campus program and move it forward. At some point, he will literally work with just about every department on campus.”