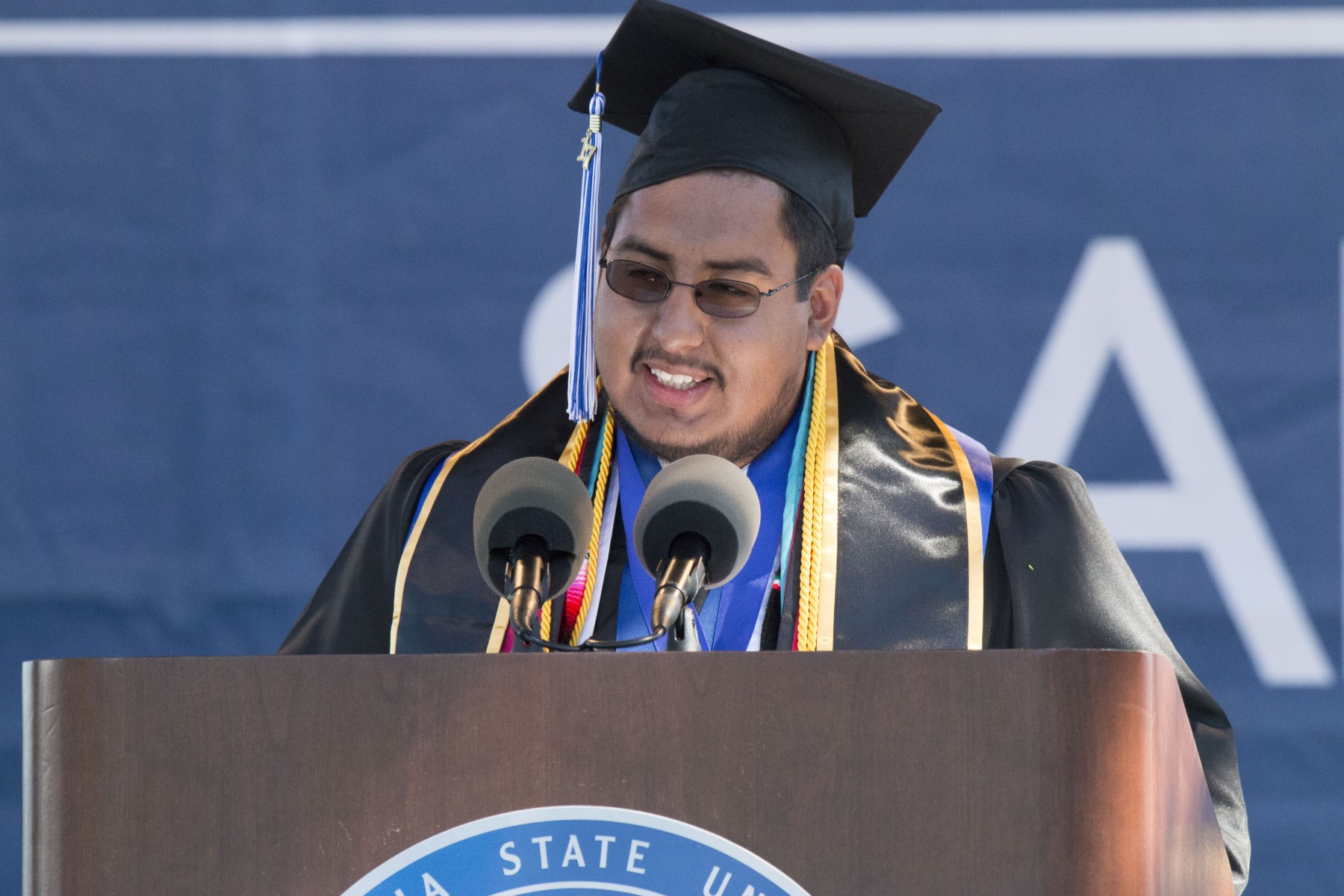 Carlos Morales is pictured speaking at commencement in 2017. Morales died unexpectedly on Sept. 9 at age 24.

Yazmin Doroteo was a first-year student at Cal State San Marcos in 2014 when she noticed a fellow freshman in her humor in literature course.

Doroteo finally met Carlos Morales later that spring during a Leadership, Education and Development (LEAD) retreat in Julian. During an icebreaker activity, students were asked to describe themselves using the first letters of their names, and Morales settled on “Cool Carlos,” bringing a smile to Doroteo’s face. When Morales admitted that he had forgotten to bring a towel, Doroteo let him borrow hers; back at home after the retreat, Morales sent her a gushing thank-you letter.

Their relationship quickly blossomed, and as it did, they both became more and more involved on campus. By the time he graduated in 2017 with a degree in management information systems (MIS), Morales had won the prestigious Dean’s Award for the College of Business Administration.

This month, Doroteo is both mourning and reflecting fondly on her memories of the man who became her fiancé last year. Morales died unexpectedly on Sept. 9, with Doroteo and his family by his side. He was only 24 years old.

“I’m still in shock and disbelief,” Doroteo said. “We were planning a lot of things for the future. We were planning to get married. He was hoping to get his master’s degree. We had talked about moving somewhere together.”

Morales was an Escondido native who was the first person in his family to earn a college degree. Since graduating from CSUSM, he had worked as a software engineer, living in Virginia, Arizona and Texas before moving back to North County prior to his passing. He aspired to become a business analyst.

Despite his reserved personality, Morales threw himself into his college experience. He founded the Latino Business Student Association. He served as the CoBA representative on the ASI Board of Directors. He was president of the MIS Society.

Advocating for a campus center for Latino students, Morales was part of a group that collected more than 500 signatures in support, helping ASI to approve a resolution that led, in September 2015, to the opening of the Latin@/x Center. He participated in “Beyond the Stereotype,” a university-wide awareness project about cultural appropriation and social justice. For his work, he received a certificate of recognition from state Sen. Joel Anderson. 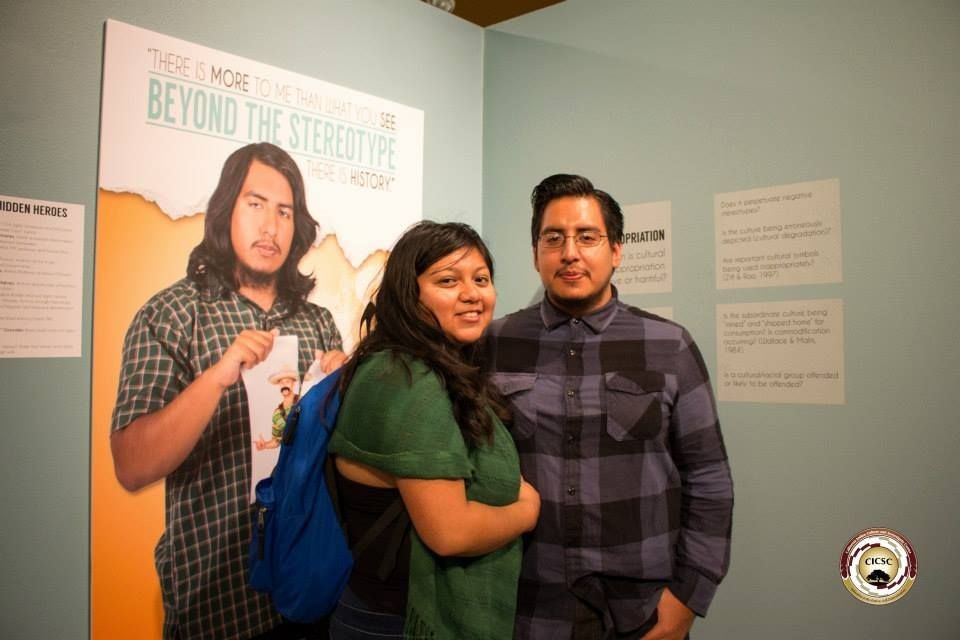 Carlos Morales with his girlfriend, Yazmin Doroteo, at the opening of the "Beyond the Stereotype" exhibit in 2015. Morales and Doroteo got engaged last year.

Morales also gave his time, along with Doroteo, to the California Indian Culture and Sovereignty Center at CSUSM. Morales was, and Doroteo is, indigenous because their fathers hail from Oaxaca, Mexico, and are descendants of the inhabitants who were present before the Spanish invasion. Both belonged to the American Indian Student Alliance and volunteered at the annual California’s American Indian and Indigenous Film Festival.

“Carlos was a wonderful, engaged and thoughtful student,” said Joely Proudfit, director of the CICSC and chair of the American Indian studies department at CSUSM. “He made his mark at CSUSM while representing his peers, college and campus in a variety of ways. He will be forever missed, but not forgotten.”

Doroteo said Morales encouraged her to become the College of Humanities, Arts, Behavioral and Social Sciences rep to ASI, and that he eagerly agreed to speak about CoBA to younger students in the Educational Opportunity Program, for which Doroteo worked. After she graduated – also in 2017, with a degree in criminology and justice studies and sociology – he urged her to pursue a master’s, which she recently completed in sociological practice.

“Physically, he wasn’t here while I was getting my master’s; he was working in Texas,” Doroteo said. “But he supported me financially, mentally and emotionally. I don’t think I could have done it without him.”

Doroteo, 26, is now mulling the next step in her academic journey – a possible Ph.D. in educational leadership.

Morales is survived by his father, Victor, his mother, Anna, an older brother, also Victor, and a younger sister, Xochitl. His brother and sister both graduated from college this year, Victor from CSUSM and Xochitl from UC Riverside.

Family members have set up a website where they’re seeking donations to cover the cost of a funeral. On the site, they remember Carlos as a “giving soul” who loved his family, new adventures, Chicago-style-pizza, and video games and collectibles.

“Carlos was admired. A lot of people cared about him,” Doroteo said. “He did so much for the campus community and the outside community that he deserves to be recognized and celebrated.”