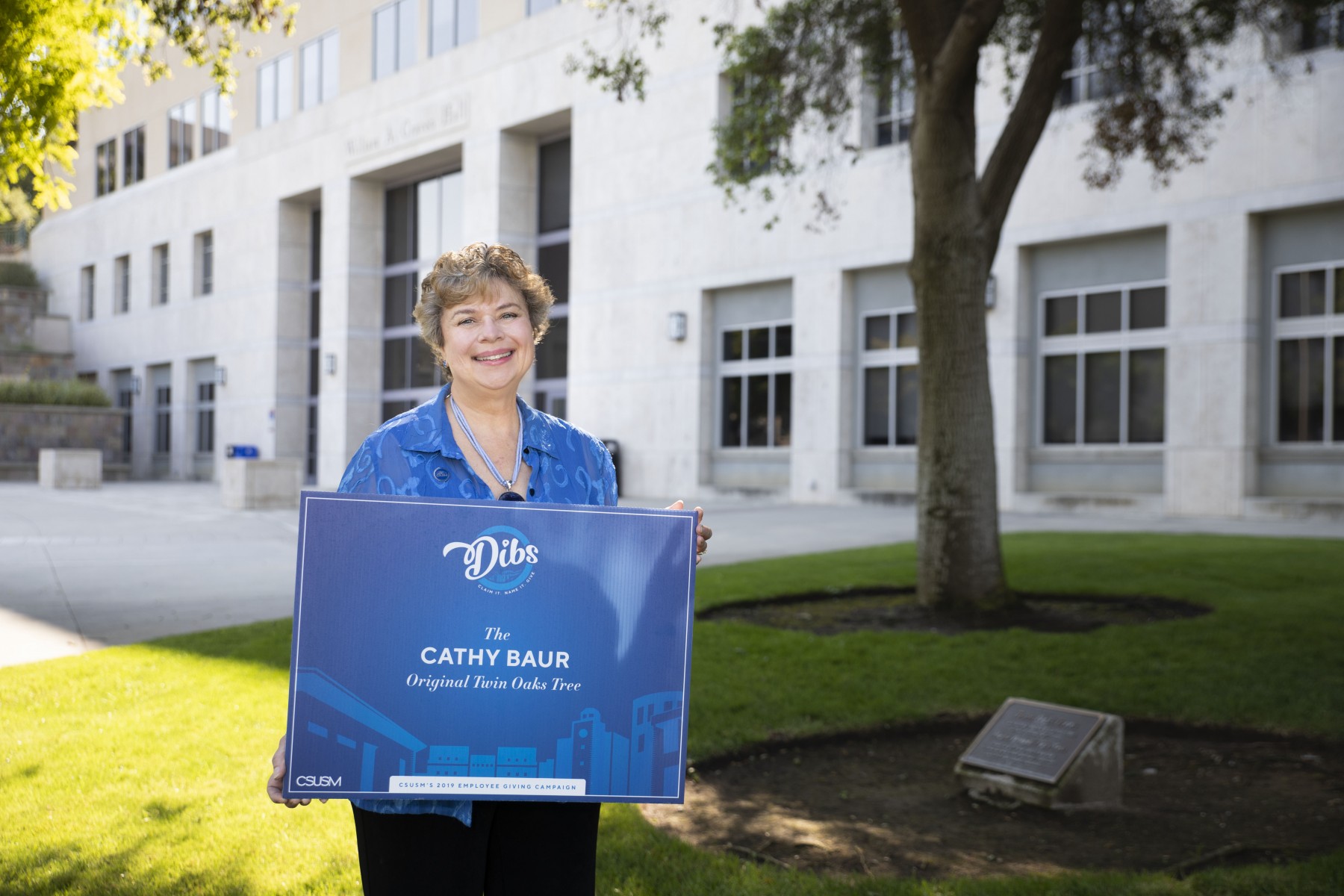 Cathy Baur, who began her career at CSUSM leading the Office of Communications, will retire as the vice president of University Advancement in July. Photo by Andrew Reed

Cathy Baur went through a half-dozen newspapers every day when she was the public information officer for the Poway Unified School District.

In February of that year, Baur came across a front-page story in the San Diego Tribune (a precursor to the merger that formed the San Diego Union-Tribune) about the opening of the state’s first new public university in two decades.

The headline that drew her attention? “CSU In San Marcos: 21st century school.”

“I remember reading it, saying, ‘You know, someday I want to work there,’ ” Baur said.

Nearly two decades later, in 2008, Baur’s wish came true. And next month, after 12 years at Cal State San Marcos, Baur will enter the next chapter of her life when she retires as the university’s vice president of University Advancement.

Baur’s path to becoming a vice president at CSUSM was not something she ever imagined when she arrived to lead the university’s Office of Communications, but it likely came as little surprise to one of the people who hired her.

“In 2008, along with Vice President Neal Hoss, I had the pleasure of serving on the search committee to hire a new director of communications, a very critical position at any time in an institution’s development, but especially at that time as the university was going through unprecedented and exponential growth spurts,” said Jan Jackson, CSUSM’s founding vice president of Community Engagement who retired in 2015.

“I will never forget that particular hiring experience because our decision was one of the best and smartest of my career. Most always we hope we’re hiring the right individual, but in Cathy’s case, we absolutely knew she was right for the job. And Cathy has continued to reinforce that decision throughout her entire tenure at CSUSM.”

Hoss was the vice president for University Advancement when Baur was hired, and his move to vice president of Finance and Administrative Services in 2016 created the opening that Baur filled.

“To understand Cathy, it’s important to understand three things – tells, passion, competition,” Hoss said. “People who have spent much time with Cathy know that she has ‘tells.’ This means that Cathy gives non-verbal clues as to how she feels about an issue. One of Cathy’s other traits that stands out the most is that she is passionate about issues of importance to her. This means that Cathy will not hesitate to express her views. Finally, Cathy’s most dominant trait – by far – is competition. Cathy is competitive. This means she is going to win, so her opponents may as well accept it and move on.

“Looking at all of these traits together, it’s no wonder that Cathy has had a long, successful career and has been an outstanding contributor to the success of CSUSM in multiple roles. And having tells just makes Cathy fun to work with.

“We will miss Cathy, and we know with her retirement coming before some others of us, she wins … again!”

Baur’s arrival at CSUSM in 2008 as the associate vice president for communications completed a circle of sorts. She got her first taste of higher education communications while working in Fresno State’s public information office as an undergraduate student. That internship opportunity made a lasting impression, and one of Baur’s initial goals at CSUSM was creating a similar opportunity for other students.

“As we started to grow the communications office, it really was an obligation for us to serve as a learning ground for our students,” Baur said. “And the internship program is certainly one of the things that I'm most proud that the office has been able to do. When you look at the number of students who have come through – and gone on to some great careers – I feel really good about that.”

As associate vice president of communications, Baur helped the university build a brand in the region while also, when necessary, navigate challenging circumstances. One of those instances occurred in May 2014 as the Cocos Fire burned nearly 2,000 acres and destroyed 40 structures in communities surrounding CSUSM. Campus had to be evacuated, and commencement ceremonies were postponed.

Bridget Blanshan, associate vice president for Student Development Services/Title IX coordinator, was the dean of students at the time and collaborated often with Baur. Blanshan recalls the difficult conversations that were necessary and the work that went into ensuring that the rescheduled commencement would serve the best interests of students and the campus.

“Those are the kinds of situations where I really value the team of people that we are so fortunate to work with on campus, and Cathy has always been right up there,” Blanshan said. “She is able to wrap her arms around a difficult set of circumstances and articulate why this is part and parcel of being a university campus in the 21st century.

“We've negotiated really difficult issues together and we've also had time to laugh a lot. And I think those often go hand in hand. Not that you're laughing when you're dealing with the difficult things, but it creates a shared experience where there's just such goodwill. That's something that I'll miss with Cathy.”

“At the end of the day, Cathy always put her heart in the work,” Gross said. “She wanted Cal State San Marcos to be seen for the exemplar that she knows it to be. CSUSM is indeed a better and stronger university because of her contributions.” 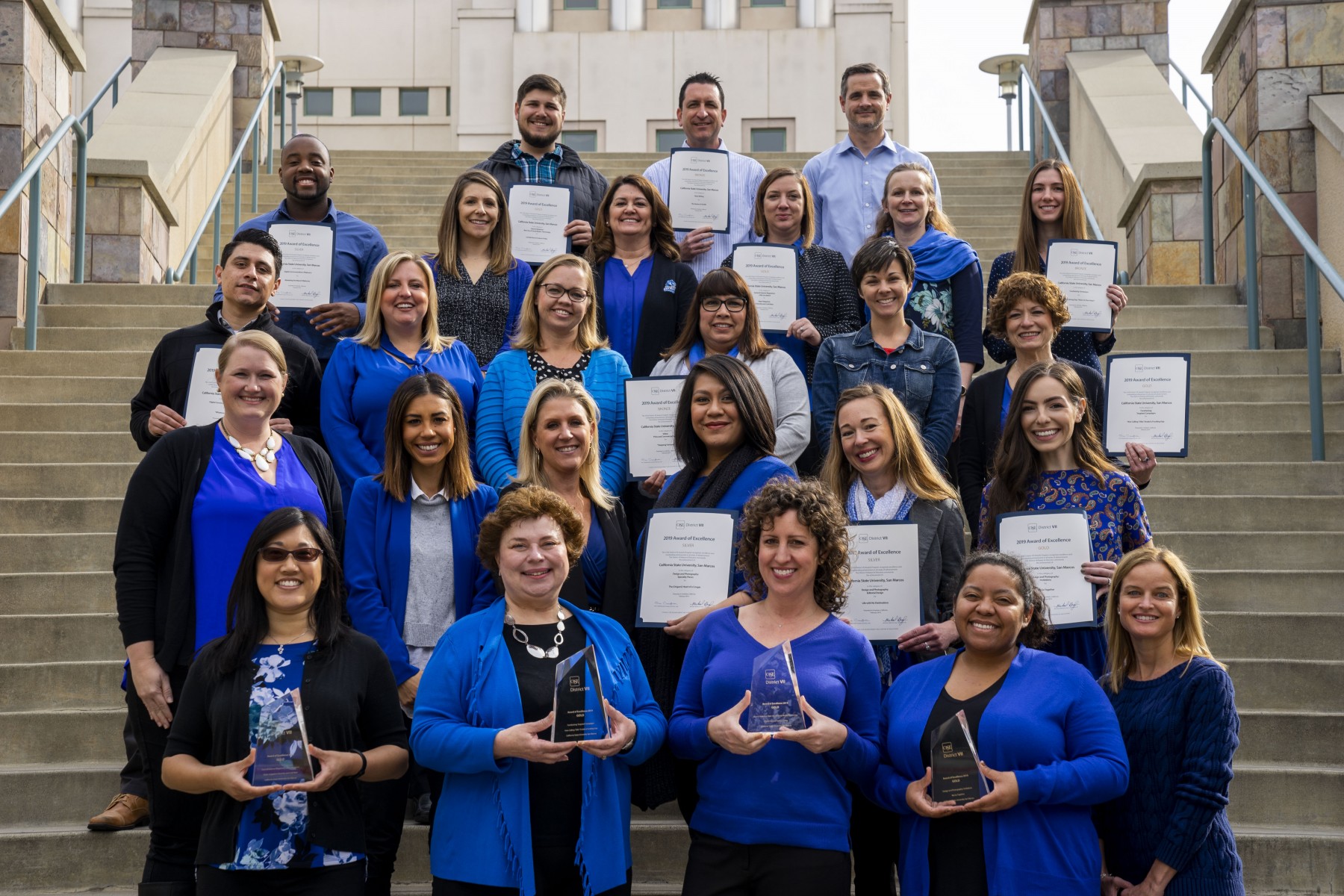 Vice President Cathy Baur joins members of her University Advancement team in February 2019 to celebrate the department receiving 11 awards at a regional conference for the Council for Advancement and Support of Education (CASE), a membership association serving educational institutions and the advancement professionals who work on their behalf in alumni relations, communications, development, marketing and allied areas.

Baur never had aspirations of moving into a vice presidential role because she loved the work she was doing in communications. But when the opportunity emerged in November 2016 to serve in an interim capacity as vice president of University Advancement, it only took a week for her to realize how much she loved having an opportunity to work closely with donors and help them fulfill their goals of supporting CSUSM students and the university.

Six months later, Baur was named the permanent vice president. Among her notable accomplishments was guiding the university to the successful completion of its first comprehensive fundraising campaign. Dubbed Forward Together, the campaign raised $55 million to support the university’s commitment to preparing tomorrow’s leaders, building great communities and solving critical issues.

“The fundraising success at CSUSM under Cathy’s leadership has been extraordinary for a young university,” said Jack Raymond, past board chair of CSUSM’s Foundation Board, which played an integral role in the campaign. “It has surpassed many CSU institutions far older and larger. She established, and now leaves, a grand tradition of philanthropy at our university.

“From the moment I met Cathy when she picked me up from the airport during my first campus visit in the spring of 2019, I knew that she was deeply passionate about CSUSM,” Neufeldt said.

“We spent a lot of time in my early months at CSUSM traveling to events together, and I came to understand the key role that Cathy has played over the years in connecting our university to so many external friends and community partners. From university anniversary celebrations to the tremendous success of the Forward Together campaign, Giving Day and so much more, she should feel extremely proud to know her impact will be felt for years to come. Cathy has been a trusted adviser and colleague, and I wish her all the best as she embarks on her next great adventure. I have no doubt she will stay very busy, even in retirement!”

From the moment Baur arrived at CSUSM, she knew it would be the capstone to her career.

“It was an opportunity that was almost 20 years in the making to get to be part of the campus,” Baur said. “I knew that this was where and how I wanted to conclude my career because I felt so good about the mission.

“It’s been so wonderful to be part of something so positive and uplifting, to know in some little way your efforts have helped transform a life, a family, a region. Being part of CSUSM, you have that opportunity – and it is so rewarding.”