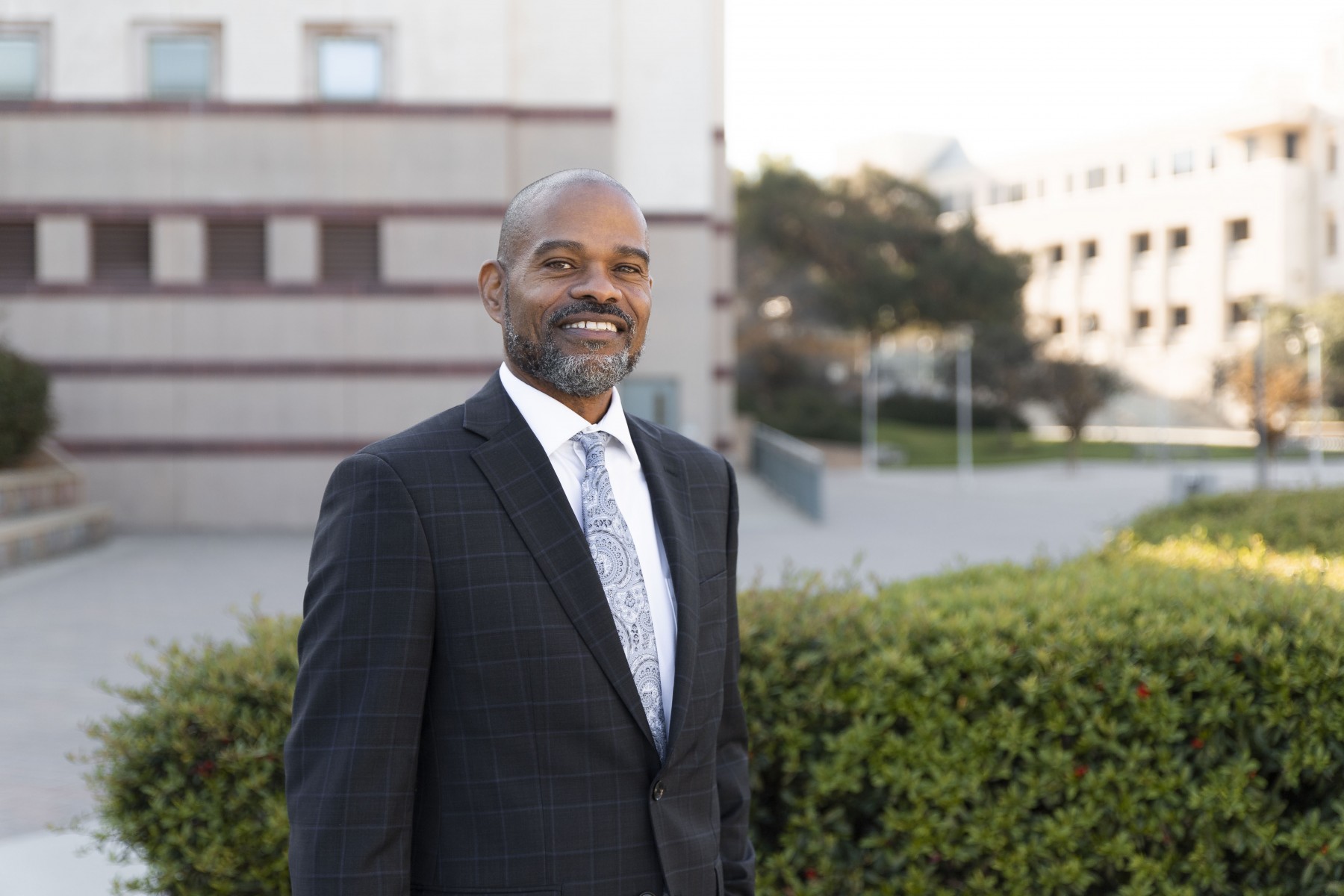 Chief Diversity Officer Dr. Aswad Allen works collaboratively with internal and external campus stakeholders to advance and be an advocate for inclusive excellence and equity. Photo by Andrew Reed

As a child, Aswad Allen heard a familiar refrain from the adults in his life: Get some fat on your head.

It meant that he should seek knowledge and the understanding that goes with it.

It’s a phrase that still resonates with Allen. He watched his parents play central roles in the civil rights movement, learning more as an active participant than he ever would have by watching events unfold on TV.

“It's part of my DNA,” Allen said. “From that experience, I looked at the world through a lens of fairness and equity and justice and righteousness. I've always had that as my reference point for what is healthy and what is good engagement.”

Allen has brought that perspective to Cal State San Marcos as the university’s chief diversity officer, a position he assumed in July.

“Dr. Allen has been great to work with,” said Ariel Stevenson, director of programs and initiatives for the Office of Inclusive Excellence. “He recognizes the institution's efforts to this point, and I can see he is committed to evaluating and facilitating institutional and organizational change. I've personally learned so much from him just in the very short time he's been here. I am excited about the work we will all do together as a campus committed to inclusive excellence.”

In addition to overseeing the Office of Inclusive Excellence, Allen serves on the President’s Administrative Team, where he joins others in providing leadership and advising President Ellen Neufeldt on key decisions affecting the campus community.

“I’m enjoying learning about the passion and the commitment that our faculty and staff have around supporting students and getting students across the finish line and into their desired pathways,” Allen said. “I see so many different established and percolating activities that prove that to be true. There’s no question we have challenges in different areas, but with those challenges, I see a willingness for tackling them.”

Allen knows about overcoming challenges. Most of his early years were spent bouncing around the country. He moved from his home state of Colorado to Georgia to North Carolina and back to Georgia before finally returning to Denver for middle school and high school. He switched elementary schools so many times that he’s not even sure how many he attended.

“All of that moving really made my upbringing very dysfunctional,” he said.

Allen attended an all-boys Catholic high school and had to work to help pay for tuition. The dysfunctional upbringing that Allen references came to a head when he was 16 and left home. He spent more than a year couch surfing before eventually landing at his grandparents’ house. He credits his grandparents for being instrumental in his personal growth and sparking his desire to participate in education.

Allen has eight siblings, but he added what he considers a ninth as a teenager when someone he met became like another brother to him. During their sophomore year, the friend said he was going to be a physician.

“I hadn't experienced a Black doctor before, so it was hard for me to imagine,” Allen said. “I wanted to imagine it, but I couldn't. So I thought he was joking. Well, he's a physician today and owns his own practice. He's one of the inspirations that helped me. He got his M.D. and he inspired me to get my Ph.D.

“You’ve got to find people along your path who are walking the same direction. Iron does sharpen iron; it's very real. And that's what we did for each other.”

A low-income, first-generation college student, Allen attended the University of Colorado Boulder where he participated in the Educational Opportunity Program, which provides access, retention support services and lifelong skill development for underrepresented students. Allen earned bachelor’s degrees in sociology and psychology at the University of Colorado Boulder before attending Colorado State for his master's in student affairs in higher education administration and doctorate in educational leadership and human resources.

“My lived experiences inform my service spirit and desire to help people and community," Allen said. "Everything that I have done has been around service – service to people or service to the community. I try to look at things in a very big-picture way. But I also understand how parts of systems function and how people are really what makes it go. People are the difference in anything that we do. So I look for strategic, sustainable and systemic ways to empower people and to position people to be the best that they can be.

“And that's all we're talking about when we talk about diversity, equity and inclusion. We get really confused around this whole agenda because it's become so politicized. But all we're really talking about is meeting people where they are and giving them the equipment to be the best that they can be with what it is that they're interested in doing. And if you do that well, then you're going to be successful.”