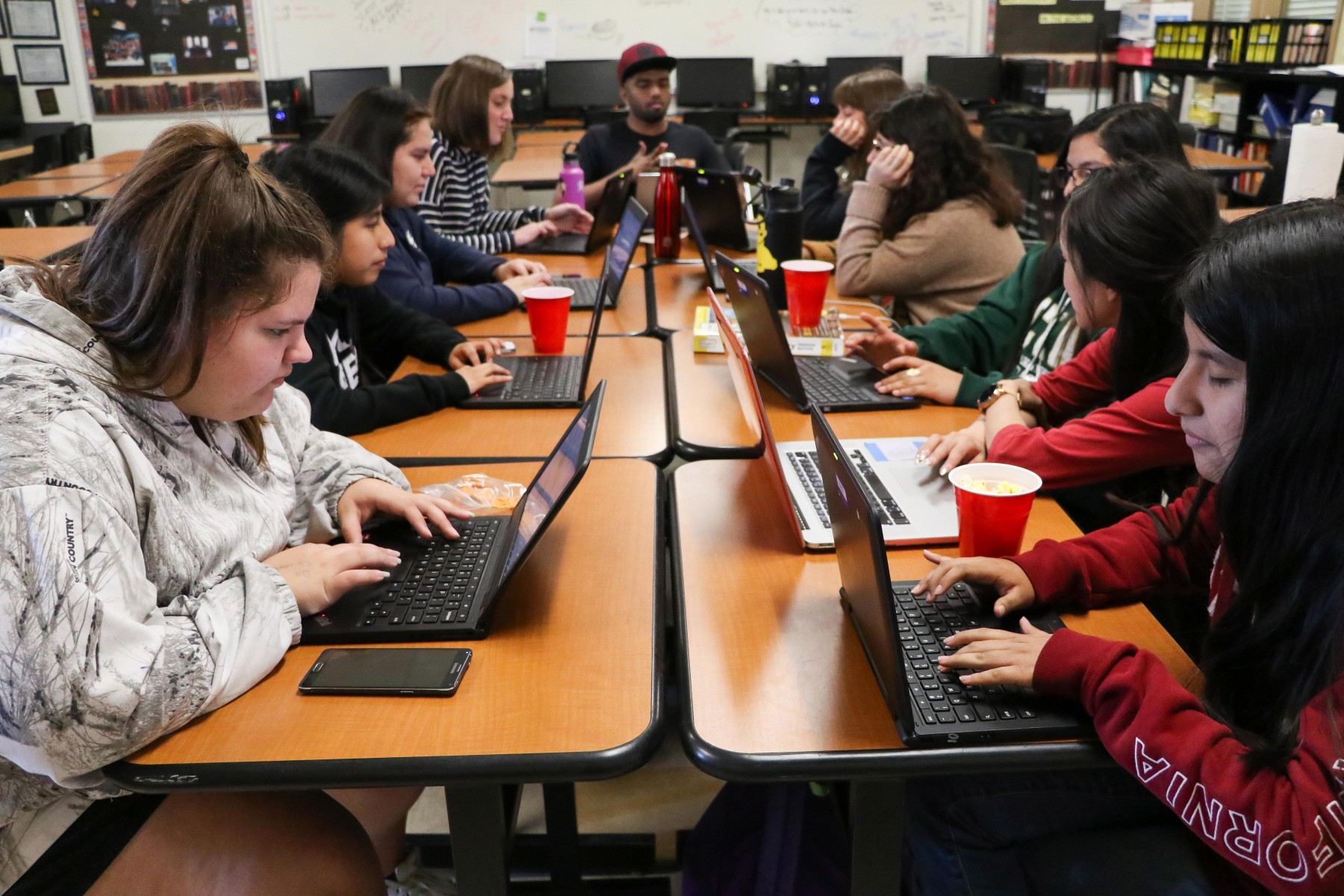 CodeQueens Club
Thanks to a three-year, Cal State San Marcos-led effort funded through a National Science Foundation grant, girls at Mission Hills High School and four other high schools in North County are learning computer coding as part of a larger effort to increase the number of women motivated to pursue careers in the field of information communication technology. Photo by Abdullah Noor

Until now. Thanks to a three-year, Cal State San Marcos-led effort funded through a National Science Foundation grant, Mitra and nearly 60 other North County high school girls are learning the ins and outs of computer coding as part of a larger effort to increase the number of women motivated to pursue careers in the field of information communication technology. The grant’s second year culminates with an April 28 showcase at Rancho Bueno Vista High School, where participants – who belong to what they affectionately refer to as the CodeQueens Club – will talk about their projects, detail the technology involved, and answer questions from judges.

“We’ve learned so much over the past year, it’s going to be exciting to show how far we’ve come,” said Mitra, who was part of a team that created an educational game app addressing environmental issues. “We’ve worked so hard as a team and have been so determined to develop this app. We’re really looking forward to it.”

Presentations at the April 28 showcase are scheduled to begin 1:30 p.m. at the Rancho Buena Vista High School Performing Art Center, 1601 Longhorn Drive in Vista, 92081. Awards will be announced at 3:15 p.m. CodeQueens from Rancho Buena Vista High, Mission Hills High, San Marcos High, San Pasqual High, and Oceanside High schools will be there with family and friends.

“Most of these girls had no coding experience and knew next to nothing about computer science before they became involved with this program,” said Dr. Anna Woodcock, research faculty at the CSUSM Psychology Department who is a co-principal investigator for the grant officially known as “Inspiring Commitment for STEM Career Paths through Extended Women’s Hackathons.” Dr. Youwen Ouyang, who chairs CSUSM's Computer Science and Information Systems Department, is the principal investigator on the project and Dr. Moses Ochanji, an associate professor in the College of Education, Health and Human Services' School of Education, is a co-principal investigator on the grant. 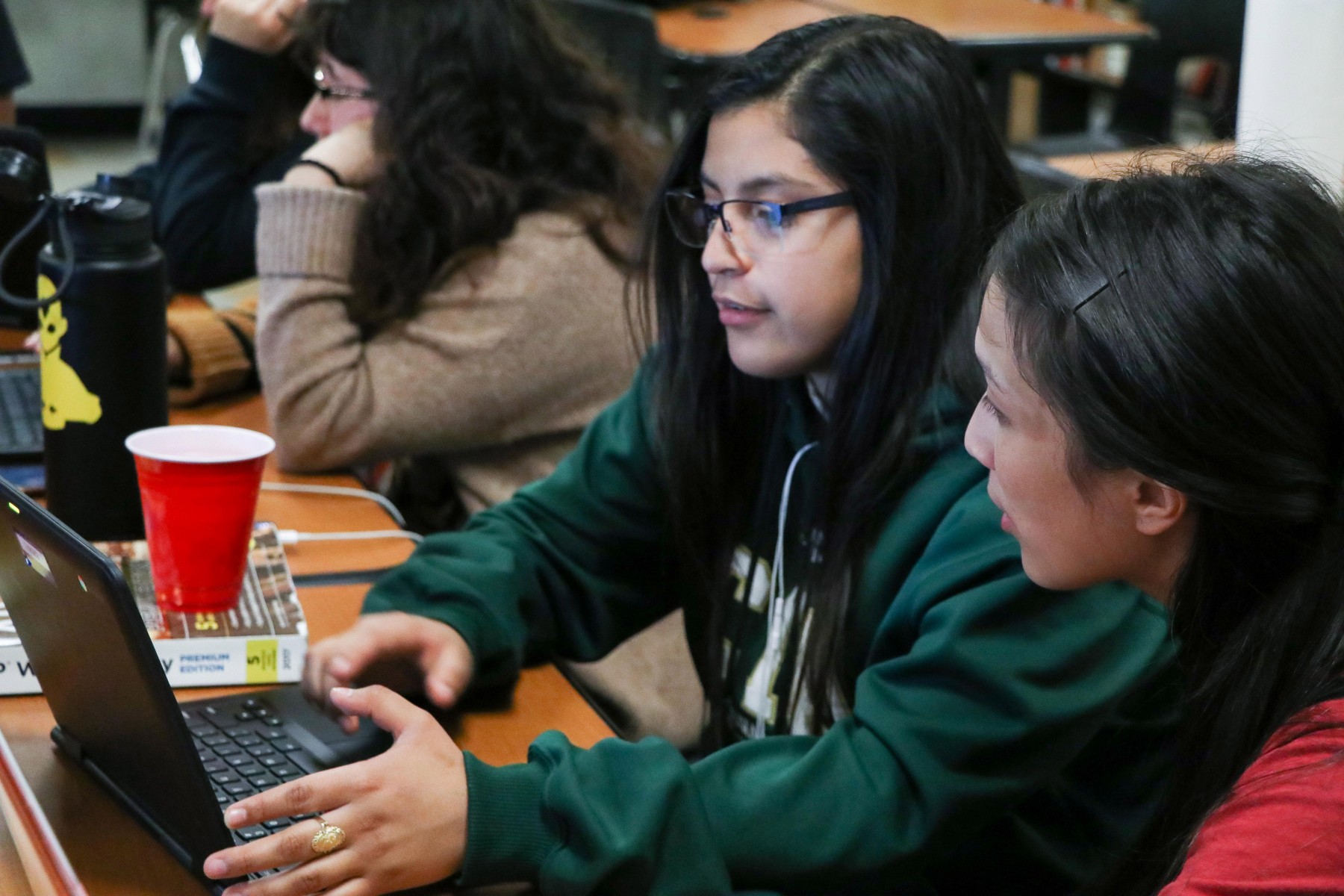 CodeQueens Club
Thanks to a three-year, Cal State San Marcos-led effort funded through a National Science Foundation grant, girls at Mission Hills High School and four other high schools in North County are learning computer coding as part of a larger effort to increase the number of women motivated to pursue careers in the field of information communication technology. Photo by Abdullah Noor

Unlike traditional, all-day hackathons, the extended “hackathon” stretches over 16 weeks and involves teaching girls from five North County high schools how to design a computer game, how to code, how to work in teams, and how to manage a project.

“There is a persistent underrepresentation of women in coding and computer science, especially among women of color, and among Latinas in particular,” Woodcock said. “The showcase is an opportunity for these students to say, ‘Hey, I’m here, and look what I can do!’ ”

Suzanne Newman, a Mission Hills High School journalism instructor who encouraged Mitra to take part in the CodeQueens Club, said the impact of the grant-funded effort is beyond profound.

Added Woodcock: “This showcase illustrates to others that just because someone may not have access to a computer or WiFi at home, or have an AP class in computer science at their high school, or may not have a parent or family friend who is a programmer, that does not mean that they can’t learn how to code and won’t have a seat at the tech table. These girls are incredibly creative and bright and have many skills and a lot of promise. It’s up to us to help them realize that promise.”