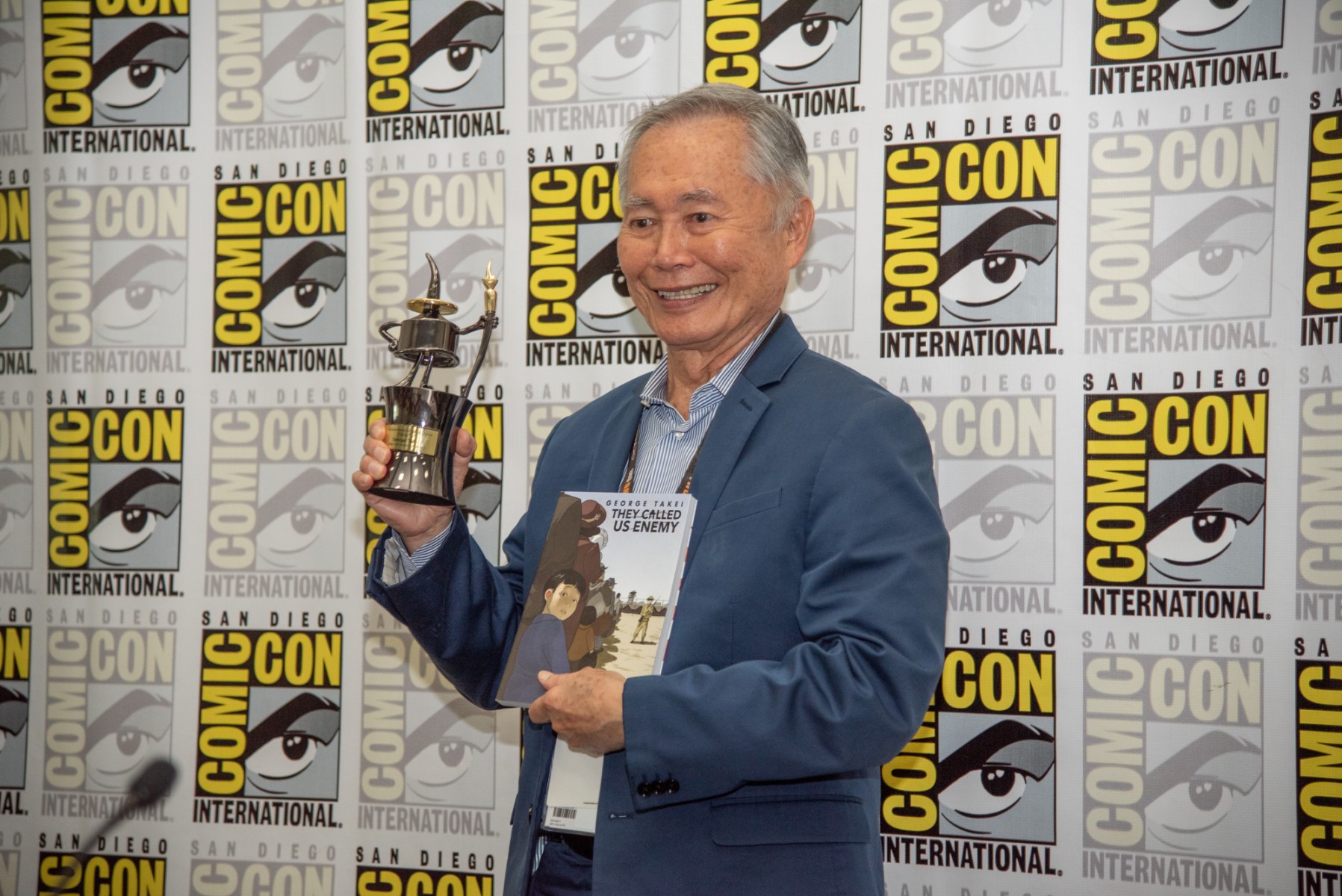 Actor and activist George Takei is the author of "They Called Us Enemy," which has been selected as the CSUSM Common Read for 2020-21.

When Cal State San Marcos chose a graphic novel by George Takei as its Common Read in February, there was little reason to hope that students might be able to hear the writer talk about the book.

After all, the actor who became famous by playing Sulu on the original “Star Trek” series, and who has gained a new legion of fans later in life as an author and activist, is a public speaker in great demand. And when the coronavirus pandemic struck in the spring, it made a visit from Takei even less likely.

But the CSUSM University Library, which runs the Common Read program, is nothing if not resourceful, and a creative community partnership will allow that much-anticipated appearance by Takei to happen – just virtually, of course.

The library has joined together with One Book, One San Diego, a longtime regional literacy initiative sponsored by KPBS, which on Saturday announced that it also (and coincidentally) has selected Takei’s graphic novel, “They Called Us Enemy,” as its community read for this year. Backed by the weight of more than 80 community partners, including CSUSM for the first time, One Book, One San Diego will host Takei for two virtual events this fall. Both are free and open to the public, with no limit on attendees.

The first is the One Book kickoff on Sept. 22 at 7 p.m., featuring Takei being interviewed by Beth Accomando, a KPBS arts and culture reporter. You can register in advance here, but registration is not mandatory and the event also will be live-streamed on sites like Facebook and YouTube.

The second event, Oct. 27 at 6 p.m., might be more geared to some CSUSM students, as it was created specifically for the 15-20 age group. It will feature a panel discussion with Takei, his co-authors (Justin Eisinger and Steven Scott) and the book’s illustrator (Harmony Becker). CSUSM students will be able to submit to the library in advance questions for Takei and the panel by video (more information to come).

“Our library has always relied on rich collaborations with campus and community partners to make awesome things happen for our students, but at a time when financial resources are scarce, these collaborations are even more important,” said Jennifer Fabbi, dean of the library. “The partnership with KPBS and One Book, One San Diego is taking the CSUSM Common Read to new heights this year.”

The Common Read program began in 2011 when CSUSM partnered with local colleges to bring Rebecca Skloot, author of the national bestseller “The Immortal Life of Henrietta Lacks,” to San Diego County. Each fall, a campus committee, with input from stakeholders across the university, selects five books that are put up for a campus-wide vote, and the selection for the following academic year is announced in early spring.

“As the title suggests, the main goal is to get students, faculty, staff – our entire campus community – connected through a common read,” said Toni Olivas, CSUSM’s engagement and inclusion librarian, who chairs the Common Read committee. “This is something that brings us together, and even if we have different viewpoints, we’re still able to get together as a community to discuss an important piece of literature.

“Also, as a librarian, one of the biggest values of this program is just to get people reading.”

“They Called Us Enemy” is a graphic memoir in which Takei revisits his haunting childhood as one of 120,000 Japanese Americans forced into internment camps by the U.S. government during World War II. The book, named one of the best of 2019 by Amazon, NPR, Publishers Weekly and several other outlets, is the first graphic novel chosen as part of Common Read, which Olivas hopes will make it more accessible to a wider campus audience.

“I think that was really exciting for folks,” she said. “And even though it’s set in World War II, it’s still very relevant to current events with what’s happening at the border. Plus, it’s George Takei. He’s fantastic.”

This year, people will be able to delve into the Common Read choice more easily than ever before. Every freshman student who attended virtual orientation this summer received a welcome package that included the book, accounting for almost 2,500 total physical copies distributed. Additionally, the library has ordered 100 digital copies of the book for students, faculty and staff to check out.

As with past editions of the Common Read, nearly all first-year students in a GEL or GEW course will study the book as part of the class. This year, Matthew Atherton, associate director of the Faculty Center, presented a workshop for GEL/GEW professors who wanted extra help in teaching the perhaps unfamiliar format of a graphic novel.

“We’re doing what we can,” Olivas said, “to truly make it a campus common read experience.”

Sunita Puri, a palliative medicine physician and author whose work has appeared in the New York Times, will be the keynote speaker at the fifth annual Professional Palliative Care Conference on the …
Read more