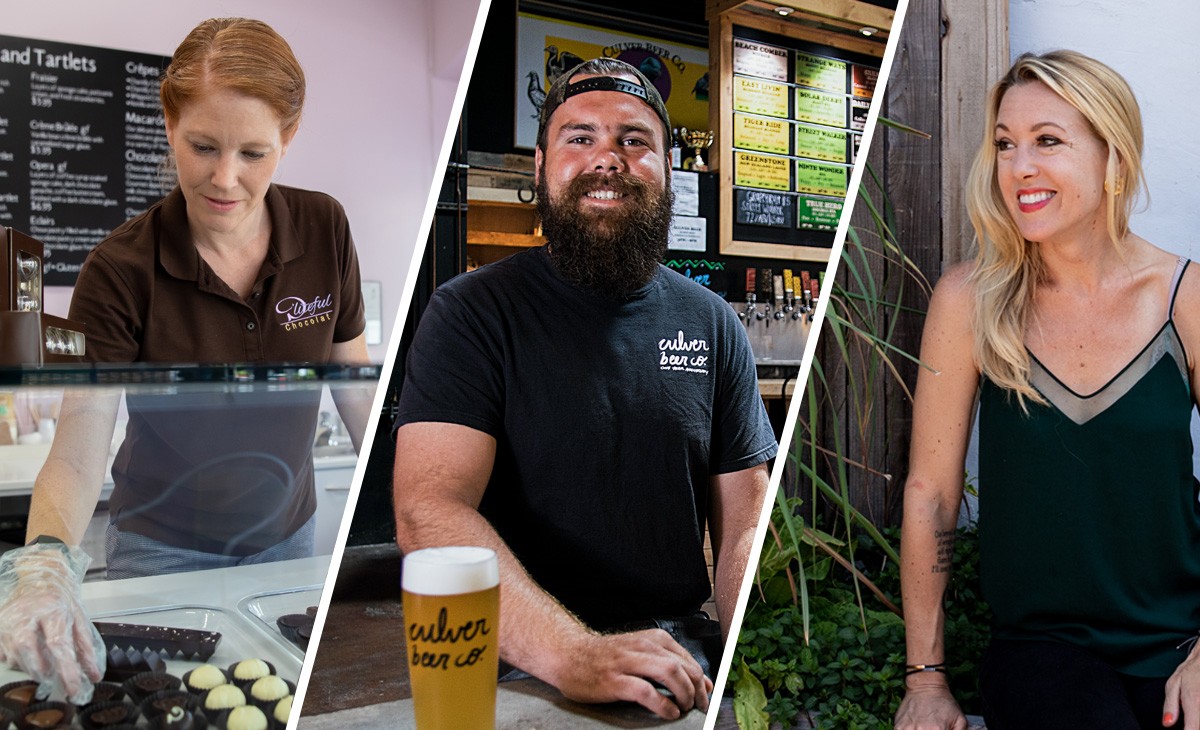 Among the CSUSM alumni whose food and drink businesses have been impacted by COVID-19 are (from left) Dayleen Coleman of D'Liteful Chocolat in Lake San Marcos, Mike Stevenson of Culver Beer Co. in Carlsbad and Jessica Waite of The Plot restaurant in Oceanside.

In late January, Jessica Waite opened a restaurant called The Plot. It was her third eatery in her beloved South Oceanside, but the one that was clearly nearest and dearest to her heart.

The Plot, as Waite likes to say, is essentially the brick-and-mortar manifestation of her personal ethos. She’s a longtime vegan activist, and the restaurant was designed to be entirely plant-based and as close to zero waste as humanly possible. Waite herself raised the more than $1 million necessary to transform a 4,400-square-foot building on Coast Highway that used to be a sushi house.

When The Plot welcomed the public for the first time, Waite was apprehensive but hopeful.

“Then we had what I consider to be the most incredible opening I could have imagined,” said Waite, a 2012 alumna of Cal State San Marcos. “Our team was great, and the revenue numbers were better than I projected. We had all of February, a month’s worth of data, to see that this model works.”

By mid-March, only six weeks after the big night, Waite’s world had been turned upside-down – not by a fickle dining industry but by a global pandemic that has devastated nearly every sector of the economy.

Of course, she’s far from alone. Food and drink companies across San Diego County, and the nation, have been hit especially hard by the coronavirus, and among those trying to weather the storm are multiple small businesses owned and operated by CSUSM alumni.

Here are the stories of Waite and two others facing the financial fight of their lives. 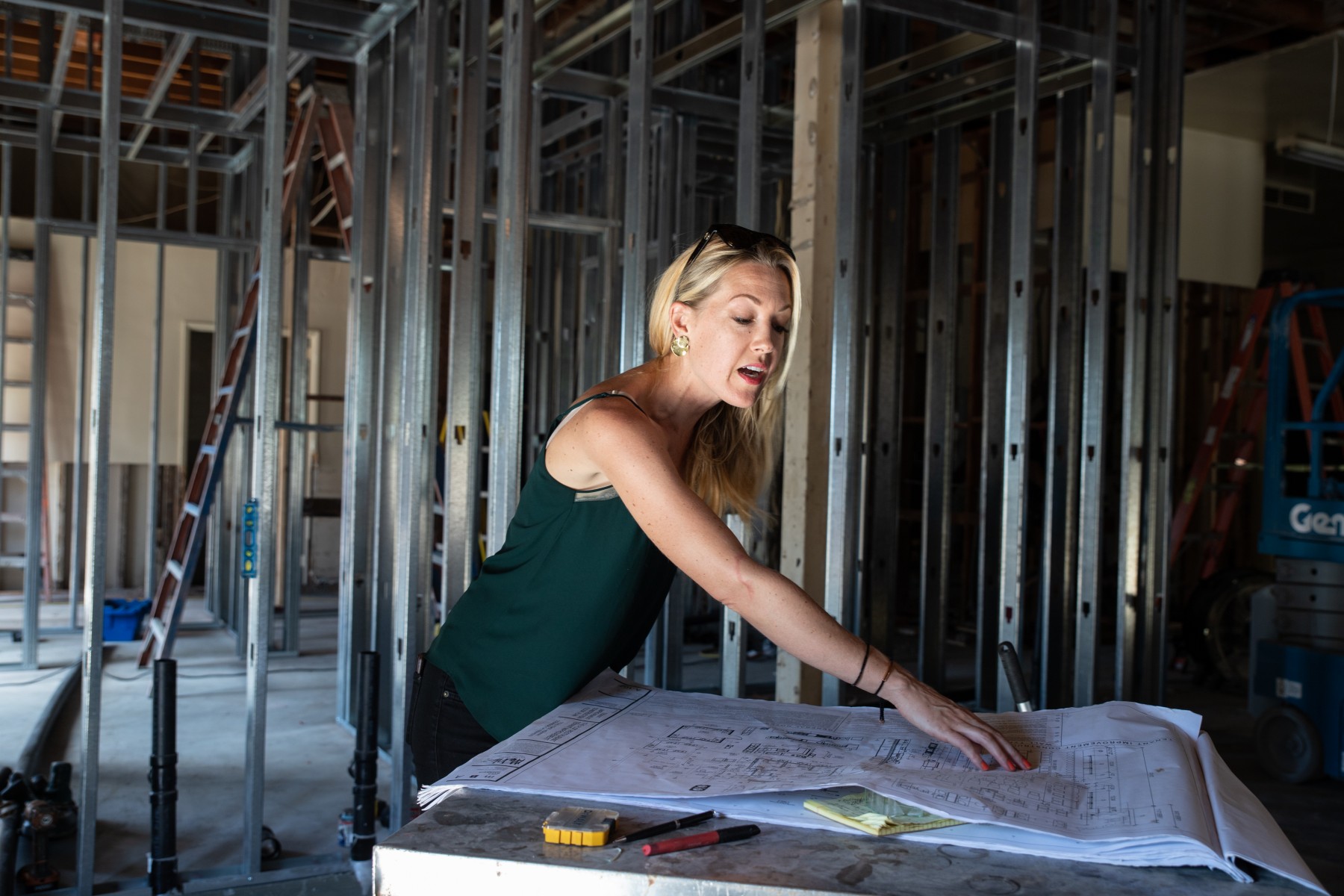 Jessica Waite, pictured when The Plot was under construction last fall, opened the restaurant in January. It's her third eatery in Oceanside. Photo by Christine Vaughan

Waite doesn’t beat around the bush when encapsulating her feelings after her number of open restaurants suddenly went from three to zero less than two months ago.

“It was beyond devastating,” she said. “It was the hardest thing I’ve ever had to do as a businesswoman. Just because I’m finally finding a little bit of emotional resilience doesn’t mean that I wasn’t literally in tears for days trying to work my way through this and figure out how to deal with it in the most intentional and best way possible.”

Almost overnight, the number of employees at The Plot and the other two eateries – the Wrench & Rodent Seabasstropub and The Whet Noodle – shrank from nearly 40 to only a handful, and that includes her two partners in The Plot venture (husband Davin Waite, a sushi chef, and Christopher Logan).

After the closings, Waite took a couple of days to salvage as much produce as she could from all three restaurants and, on March 19, launched The Plot Express, the name for her new takeout-based business model. It was originally open for online orders daily from noon to 8 p.m. so Waite could get a sense for customer demand, but she since has scaled back the days and hours to Wednesday through Sunday from 2-8.

The Wrench & Rodent, which specializes in sushi, reopened about a week later and now serves takeout Thursday through Sunday from 4-8. The Whet Noodle, a ramen shop in the same space as Wrench, remains closed.

Waite said both open restaurants are now up to about four or five employees daily, which often includes herself and her fellow owners.

“The Plot Express is holding strong – not crazy busy but staying consistent. Wrench has been quite busy, and we are so grateful for the outpouring of local support,” she said, adding that her team is using the days off to give Wrench, now 7 years old, a much-needed facelift.

Waite has yet to receive any federal money through the multiple relief packages passed by Congress, though she hopes to be part of the next round of funding. She thinks her restaurants could survive at this pace for an extended period if necessary. Of course, she didn’t go into this business, and create a labor of love like The Plot, merely to survive on pickup orders with a skeleton crew.

“We’re not digging a hole by staying open. We’ll be able to at least pay our bills and keep a few staff members on,” Waite said. “But what we lost when we closed our doors to dine-in service is bigger than just our teams. There’s something about hospitality that I loved more than I realized.

“The Plot is not just a business that we take a paycheck from. Everybody who works for it believes strongly in what we’re doing.”

While she waits for the economy, and life in America, to return to some semblance of normal, Waite tries to focus on the positive. Like the renewed enthusiasm she has noticed during the pandemic for local organic farms, including one in Oceanside owned by pop music star Jason Mraz, a community partner of The Plot. Like the local business owner who bought $2,000 worth of Wrench gift cards before the restaurant even reopened out of a desire to help keep it afloat.

Like the City of Oceanside funding a meal program to serve vulnerable populations; the city purchases meals from local restaurants like The Plot, which in turn gives them to organizations in need.

“This is an opportunity to see how strong and resilient your community, friends and coworkers are,” Waite said. “People come into the restaurants and say, ‘We’re here because we want to support you. Thank you for being here, and we want to keep you here.’ I hear that every day, maybe 50 times a day, and it’s so awesome.” 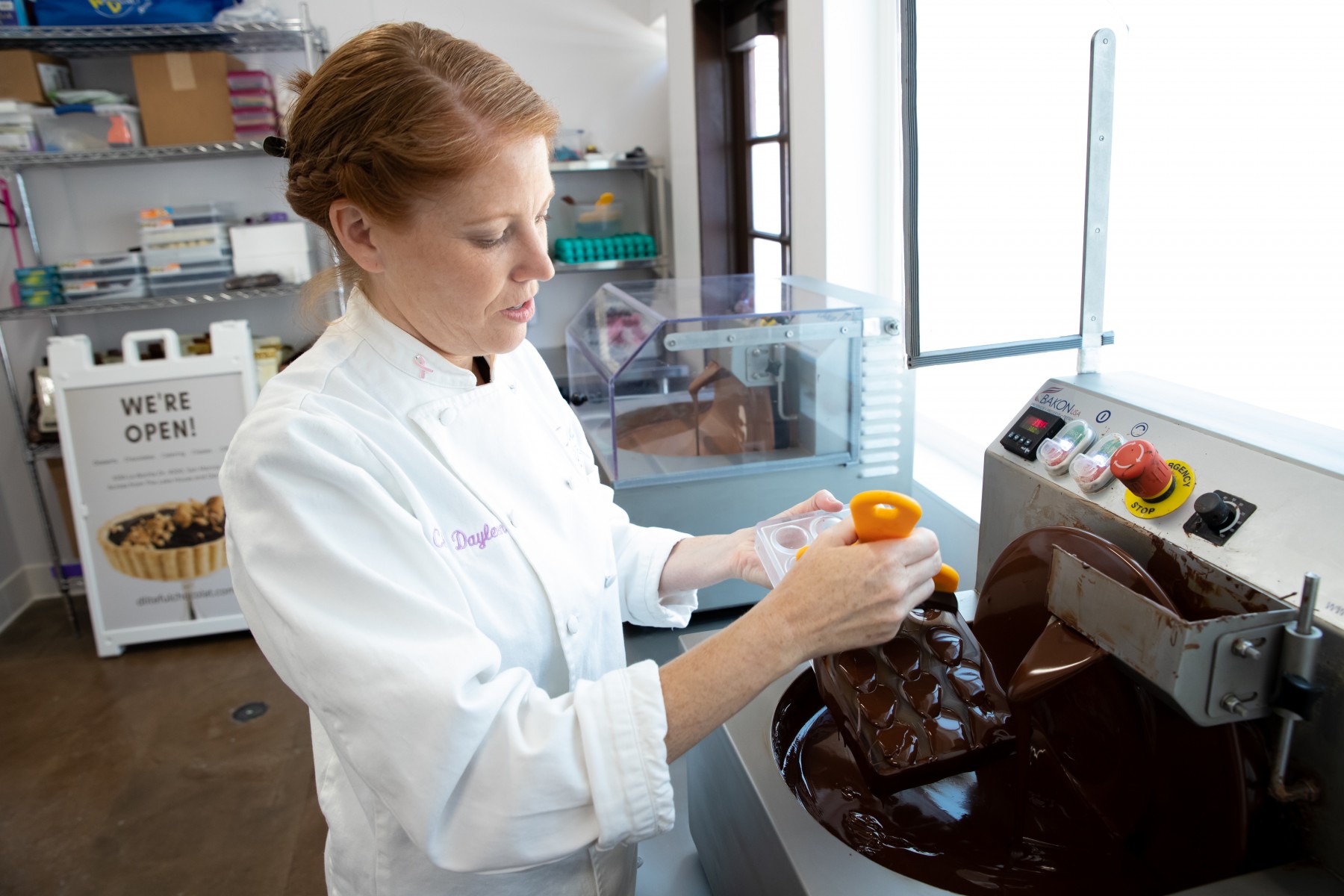 Dayleen Coleman has launched a monthly chocolate club to help sustain her business during this crisis. Photo by Christine Vaughan

Dayleen Coleman admits that she has had a lot of sleepless nights since COVID-19 began wreaking havoc on the economy in mid-March.

It’s no wonder. Coleman, a 2005 CSUSM alumna, is the proprietor of D’Liteful Chocolat, a chocolate shop and patisserie in Lake San Marcos. Filling orders for events makes up 70% of her revenue, and events are out of the question for the time being. And with the retail shop closed to walk-in customers, she estimates that overall revenue is at 15% of normal.

“Basically what we have coming in is just going to pay rent,” Coleman said. “It doesn’t cover payroll, workers comp, all the other things. So that’s what’s keeping me up at night.”

Coleman could have become despondent. Instead, she got resourceful.

On April 1, she launched the D’Liteful Chocolate Club, a monthly service that offers curated boxes of chocolates and other signature treats at a discounted price for pickup, delivery to addresses within a 10-mile radius, or shipping to San Diego and Riverside counties. Coleman modeled it after wine clubs from talking to business connections who work in the industry.

“We’re really hopeful,” she said. “If it does well, then it will be our lifeline and we’ll be OK. They say that tough times bring great ideas. This crisis is making us all get creative and think about other ways that we can make our businesses work, which in the end will only give us another source of revenue.”

Coleman, though, has been frustrated by the lack of federal assistance. She said she hasn’t received any money from the $2 trillion CARES Act and that she’s still waiting for a loan from her bank as part of the Paycheck Protection Program (PPP). She hasn’t been forced to lay off any of her seven employees (two left on their own), but their hours have been curtailed considerably.

“I’m used to having a certain level of control, and I feel like all the control has been taken away,” Coleman said. “We’re basically counting on our government to kind of rescue us, and they’re all over the place.

“I’m not scared of going under. I’m just scared of what it’s going to look like in the end. I know I’ll have the bones of a business, but I don’t know how much I’m going to have to rebuild.” 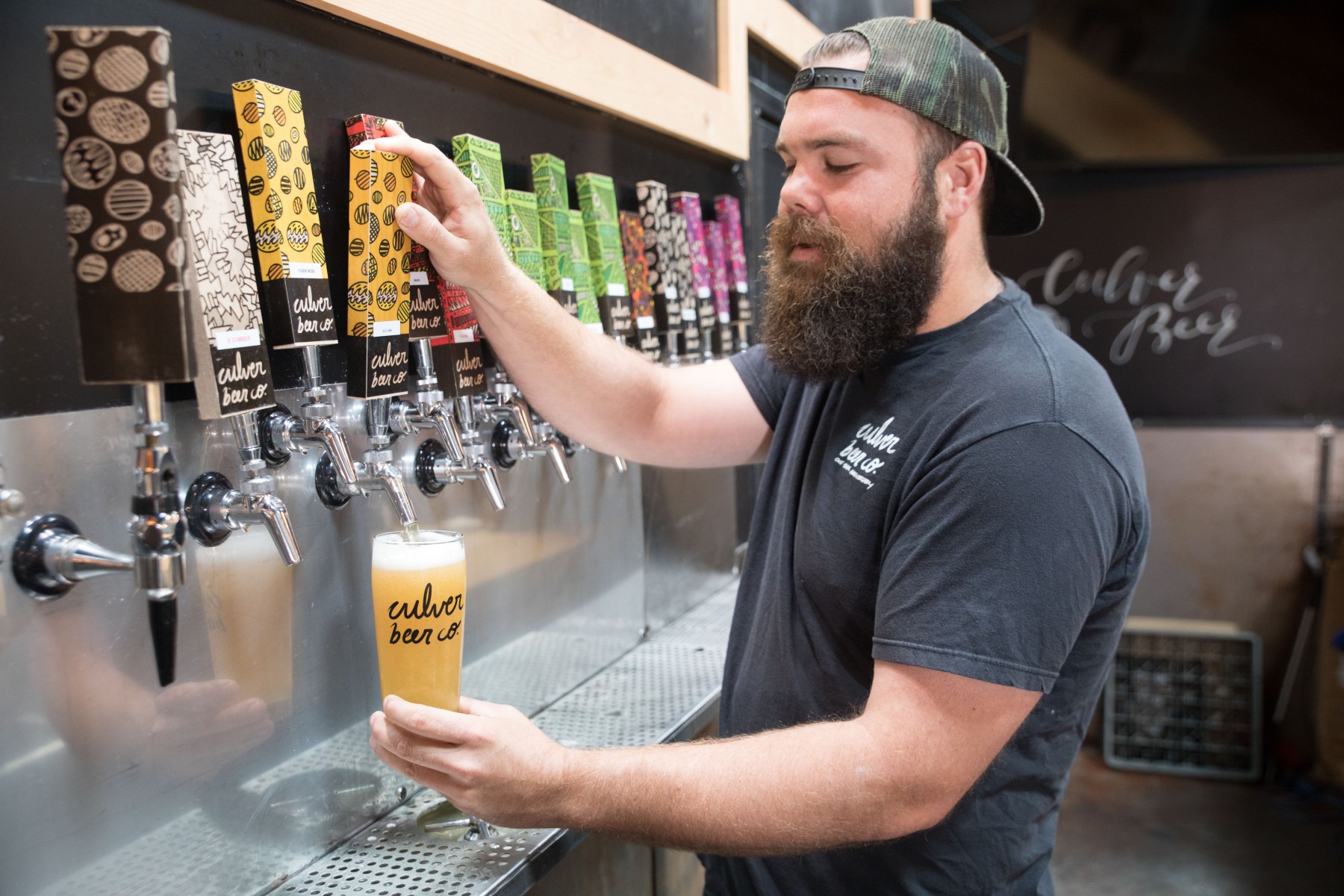 Spring is when the sun starts emerging, the tourists start traveling, and in San Diego – the so-called “capital of craft” – the beer starts flowing. In anticipation of increased demand, Culver Beer Co. in Carlsbad brewed about 300 kegs, a huge number for the still-young company, to distribute to local bars and restaurants.

Then the coronavirus came, and the market for all that beer dried up immediately.

“We did a massive push, and now we’re just kind of sitting on that inventory,” said Mike Stevenson, who founded Culver with fellow CSUSM alumnus Ben Fairweather in 2016.

Well, not all of it. Desperation breeds innovation, and Culver has begun experimenting with canning its beer for the first time – no easy pivot to make in the middle of a pandemic. Stevenson said the brewery is now selling mixed four-packs of some of its IPAs in its tasting room, and is exploring options for canning larger volumes of beer, including purchasing a small canning machine.

Still, like most of the more than 100 craft breweries in San Diego, Culver is feeling the pain. After furloughing all of its hourly workers, the company has pared its staff from 11 employees to three. The tasting room remains open for customers to purchase beer to go, and Culver has the added benefit – which many competitors don’t share – of in-house food service (a deli) that accounts for a crucial revenue stream during this crisis.

At their heart, however, craft breweries are not built for takeout. The experience is a big part of the draw. In his conversations with other members of the brewing fraternity, Stevenson can sense the collective anxiety.

“Nobody is going to blatantly admit that they’re failing, but there’s definitely been some concern,” he said. “Everyone has a break-even point that they have to hit every month, and the tasting room is a big portion of that.

“The quarantine definitely took something very sacred away from a lot of people. They like coming to the brewery or pub of their neighborhood to grab a pint or two and just hang out. And that has disappeared. We’ve lost the whole dynamic of our bar. The tasting room is a really lonely place to be right now.”

Culver is in the same boat as thousands of small businesses around the country in that it’s still waiting for its PPP loan to be approved, though Stevenson is optimistic that the company will be included in the next relief package. In the meantime, he keeps filling to-go orders, crunching less-than-rosy numbers, and trying to plan for a future that no one can predict.

“The customer base is everything, and they’ve been really good to us,” Stevenson said. “People are coming back two to three times a week. We feel blessed. We’re very much looking forward to having people eating and drinking in the bar again. However, that seems far away.”

Cal State San Marcos alumnus Alfredo Aguilar has been invited to attend one of the most prestigious creative writing programs in the United States. Aguilar, who graduated from CSUSM in 2013 with a …
Read more

The question might have been considered predictable, coming as it did at the start of a course in American Indian studies. After the professor, Joely Proudfit, proudly declared her Native heritage, …
Read more
NewsCenter