Alum Far Away, But Still Feels Impact of CSUSM

More than 15 years after she graduated from Cal State San Marcos, Crystal Rodriguez can confidently say that her experience at the university is still paying dividends.

When Rodriguez interviewed last year to be the chief of staff of the president at Buffalo State, she noticed a book on the president’s shelf that she had read in a class taught by sociology professor Sharon Elise at CSUSM. The sighting prompted Rodriguez to recommend another book that she had explored in one of Elise’s courses, and in her thank-you note to the president after the interview, Rodriguez included a copy of the novel “The Wake of the Wind” by J. California Cooper.

Buffalo State’s president, Katherine Conway-Turner, read the book during a trip aboard. Rodriguez got the job. 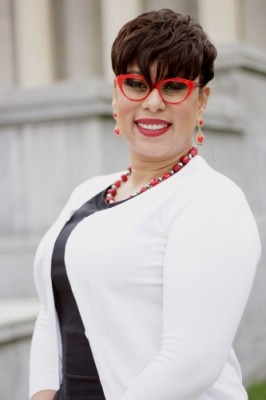 “Being a first-generation college student, I didn’t have family members where I could ask what the experience was like, so Cal State San Marcos really shaped my view of college education,” said Rodriguez, who earned a bachelor’s in social sciences in 2003. “When you’re transitioning to being the chief of staff of a president who’s all about diversity and inclusion, I have an idea in my head what that looks like.”

Rodriguez started as the chief of staff last October, managing a team of nine employees in the office of Conway-Turner. It marked a big transition for Rodriguez, who came to higher education from the world of politics. For the previous 12 years, she had worked in the administration of Buffalo Mayor Byron Brown – starting as an intern when Brown was still a New York state senator, becoming his executive assistant as mayor, then rising through the ranks to end up as Buffalo’s chief diversity officer, a position that Brown created especially for her.

“The focus was really helping underrepresented people in terms of opportunity,” Rodriguez said. “Buffalo has been in the midst of a resurgence under his administration, but my job was making sure those in underrepresented communities were able to take advantage of that.”

It was a fitting role for Rodriguez, who overcame a rough upbringing on Buffalo’s gritty east side not only to become the first in her family to attend college, but also go on to earn two law degrees. Growing up as a precocious only child in an impoverished neighborhood, she received a scholarship to attend an elite private high school, but she rebelled against what she saw as blatant racism at the overwhelmingly white school and ultimately was kicked out.

Rodriguez fared little better in subsequent stops at two public schools, as trouble in her family life spilled over into academics. At 16, she ran away from home.

“It was an easy decision for me at the time,” she said. “My stepdad and my mom were in and out, one parent working, bills not being paid. It’s pretty much the quintessential inner-city struggle. The idea of new clothes wasn’t a foregone conclusion. Extras were few and far between. Even eating sometimes was an issue.”

Things went from bad to worse after Rodriguez left home – she fell in with a local drug dealer more than twice her age, was arrested for gun and drug possession, even witnessed a shooting – but she gradually began to extricate herself from her predicament. After obtaining her high school equivalency diploma while being a teenage mom, she put Buffalo in her rear-view mirror – at the time determined never to return.

Following four years in North Carolina, Rodriguez moved to San Diego with her then-husband, a Marine who was stationed at Camp Pendleton, and her three young sons. She joined the Navy as a corpsman and somehow also found time to pursue an undergraduate degree at CSUSM.

Along with Elise, Rodriguez says she was influenced at CSUSM by political science professor Staci Beavers, who inspired in Rodriguez the confidence that she could not just strive for law school, but thrive in that environment.

“I was trying to take as many classes as I could with her,” Rodriguez said. “She was very tough, but you learned so much. I had never read a U.S. Supreme Court case before being in her class. Loved it. It set me right up.”

Beavers remembers Rodriguez as someone who was willing to “take chances” in class.

“Perhaps what most impressed me about Crystal was how she interacted with her peers,” Beavers said. “She was clearly a leader, but they could never be annoyed – or at least could never stay annoyed – when her exceptional grasp of the materials frequently outstripped their own. This was simply because she was so friendly and easygoing.

“She showed an uncanny ability to put others at ease, even when confronting clear philosophical differences. Her amazing balance of academic and people skills no doubt served her well in law school and beyond.”

Motivated by a range of factors, including the lure of a “wonderful” scholarship, Rodriguez reluctantly left San Diego to go back home, attending law school at the University of Buffalo. She earned her juris doctor, then stuck around for a fourth year to tack on an LLM degree (essentially a master’s in law).

Rodriguez eschewed a law career to work for Mayor Brown, but she does have a side practice offering a range of legal services to people in need. She also now has four children, ranging in age from 24 to 9.

She says the move to Buffalo State has greatly benefited her work-life balance.

“Being in politics for 12 years, I finally decided I needed some down time,” Rodriguez said. “It’s still fast-paced, and every day is different. But I actually have time to spend with my children afterward.”

Alum Far Away, But Still Feels Impact of CSUSM