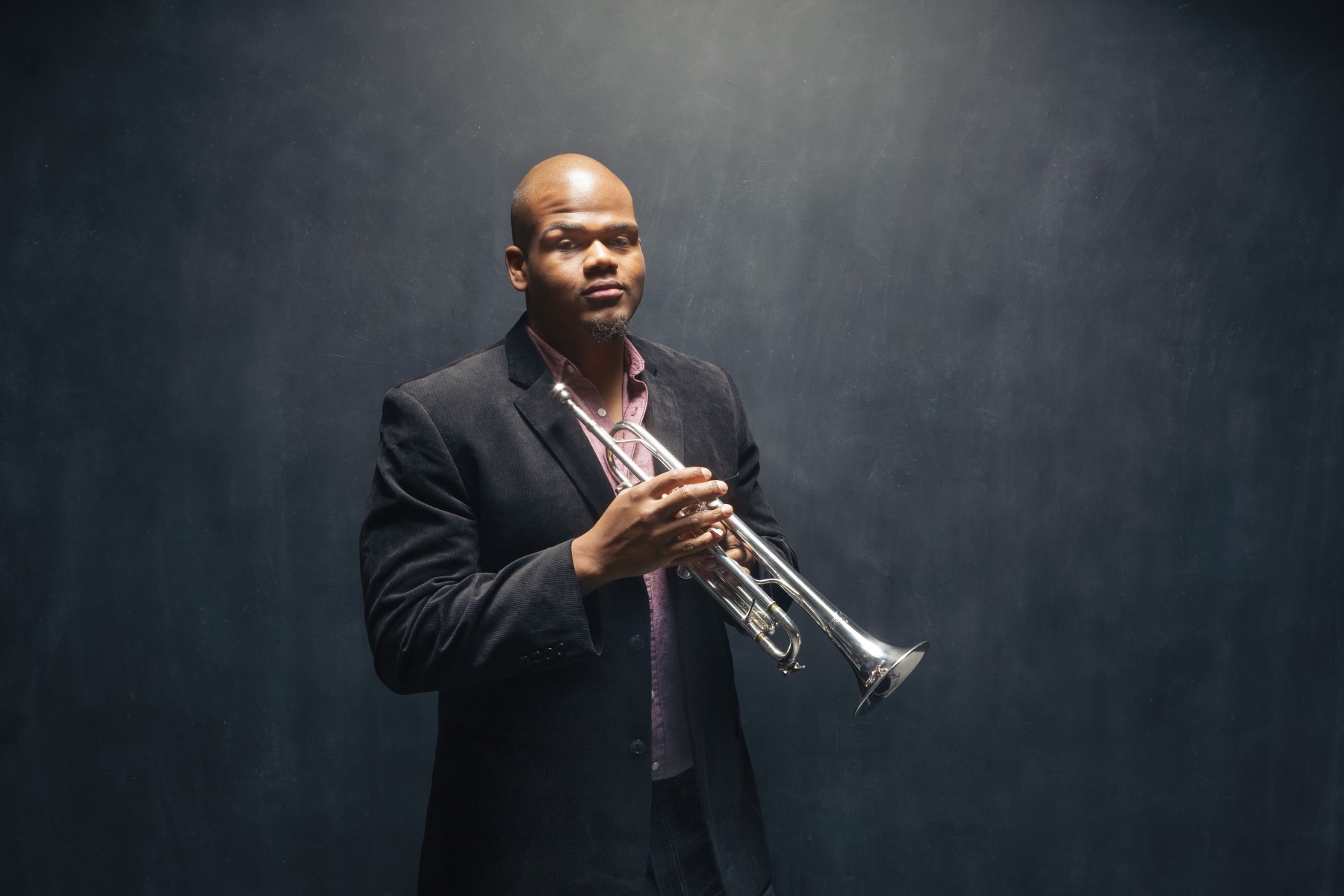 Curtis Taylor
A lecturer in CSUSM’s music program since January 2016, Curtis Taylor is a renowned trumpeter who has played in a dozen countries not to mention with some of the heavyweights of jazz.

Curtis Taylor had his heart set on playing the saxophone.

As a fifth grader in Bedford, Ohio, Taylor had no doubts after attending a symposium designed to help students find an instrument to their liking.

Then he found out the cost of a student model saxophone.

Taylor and his mother had recently moved into the school district and the moving costs made it difficult to justify the expense of the saxophone. Fortunately, the school’s band director suggested a more affordable trumpet.

It turned out to be a wise choice.

Today, at 32, Taylor is a renowned trumpeter, a Grammy Award-winning artist who has played in a dozen countries and with some of the heavyweights of jazz.

Despite his impressive résumé, Taylor said students in his Cal State San Marcos jazz ensemble class usually aren’t familiar with his background, at least not right away.

“I like letting them discover on their own,” said Taylor, who has taught at CSUSM since January 2016. “It’s always fun when they do. They’ll say, ‘I didn’t know you know that person.’

“But I’m not really here for that. I’m invested in trying to get them to learn these concepts and become better musicians.”

Taylor is focused on growing CSUSM’s music program. He said students arrive at varying levels of ability. He works to find a starting point at the beginning of the semester where they can all come together to begin building upon their knowledge base. That process not only occurs through the instruction and concepts that Taylor teaches, but also from students helping one another.

“It’s great when they have those ‘a-ha’ moments,” Taylor said.

“They just looked like they were having a really great time on the stage,” Taylor said. “I thought, ‘You get paid to do this? Sign me up.’ ”

After earning his bachelor’s in jazz studies at Michigan State, Taylor attended Rutgers for his master’s and studied with William “Prof” Fielder, who was known for teaching numerous jazz notables, including Wynton Marsalis.

Taylor recently released a new album called “#Hashtagged,” which he describes as a concept album that provides a soundtrack to popular social media hashtags. Samples from the album can be heard on Taylor’s website.

Taylor also recently did an op-ed piece for the San Diego Union-Tribune as part of the newspaper’s series on “Why the Arts Matter.” He not only noted the importance of music in his life, but how it can teach much-needed skills for other fields.

“Even if people don’t go on to have a career in music, you can take the skills you learn from music – from the practice and discipline and consistency – and you can apply it to any area of your life that you want to excel in,” he said. “I’m living proof.”