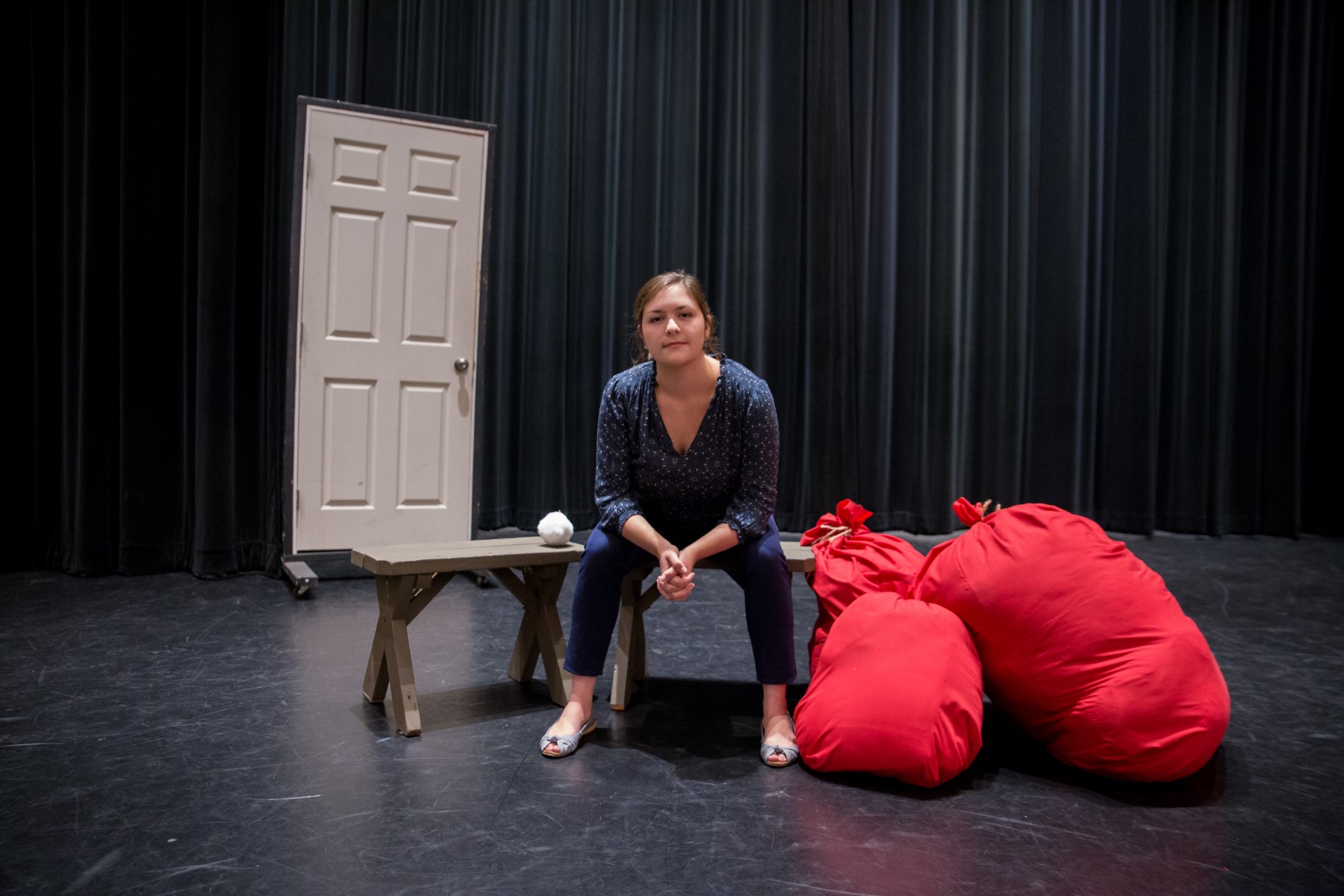 Dominique Duren
The alumna is returning to campus to direct the play "Almost, Maine." Photo by Christine Vaughan

Many students at Cal State San Marcos finish their academic careers with a capstone project, a culmination of their years of study, designed with the input of their faculty adviser.

Dominique Duren wanted to do a capstone before graduating last May with a degree in visual and performing arts, but she couldn’t find the time. Instead, with the cooperation of Judy Bauerlein, a CSUSM theater professor, she’s trying something different – an alumnus capstone.

Duren, who spent much of her CSUSM career acting in various campus productions or serving as a stage manager, has been preparing the last few months to make her debut as a director. She’s at the helm of a production of the John Cariani play “Almost, Maine” that will run for two nights, Sept. 12 and 13, both at 8 p.m. in Arts 111. The ticket cost is $5.

“I’ve been contemplating this project for over a year, but I’ve been getting everything together -- all the props, the rights to the show, auditions, callbacks,” Duren said. “Right after I graduated, I hit the ground running.”

Duren acted in almost 10 plays at CSUSM and was a semifinalist for an Irene Ryan Award in 2017 for her work in “As It Is in Heaven.” She first caught the directing bug in March 2017 when she was an assistant on “Home,” a play created by Bauerlein that is based on interviews with residents of an Escondido homeless shelter. And her desire to run the show was cemented last spring when she helped director Melissa Coleman-Reed produce “Men on Boats” at New Village Arts Theatre in Carlsbad.

“It was one of the best things I’ve ever done in my life, especially in the arts,” Duren said of the play, which featured a 10-woman cast and all-female crew and production team. “After watching that show and (Reed) do the whole process, it made me want to direct even more.”

For her debut, she chose “Almost, Maine,” a play that flopped when it opened Off-Broadway in 2006 but has gone on to become wildly popular worldwide, being performed in 20 countries and translated into more than a dozen languages. In fact, according to Dramatics magazine, it was the most-produced play in American high schools from 2010 to 2013, until it was supplanted by an obscure little piece called “A Midsummer Night’s Dream” -- which, incidentally, Duren also performed in at CSUSM.

“Almost, Maine” is a series of nine vignettes that explore love and loss in a remote, mythical town near the Canadian border. It features 20 characters, and Duren made the creative decision to have them be played by only four actors – two fellow alumni and two students.

“One thing I’ve noticed in my years in theater is not only is it fun for an actor to go up on stage and play six different people in a full show,” she said, “but for an audience member, it’s so cool to watch somebody who just went off stage change out of costume in 30 seconds and come back as someone totally different.”

Duren appreciates not only the story of “Almost, Maine” -- which she describes as “real-life comedy” -- but also the structure. Unlike most theater scripts, which are just dialogue, Cariani’s script includes detailed instructions about staging and how the dialogue should be interpreted.

“The way this show is written is very intelligent,” said Jason Eberwein, a web developer at CSUSM who’s also a theater veteran and is serving as Duren’s mentor for her first directing job.

“(Playwright) David Mamet is a big proponent of real speak, where people talk over each other and the heightened speech of that, and Cariani takes it a step further and shows exactly where the overlaps are, what the characters are thinking. He gives a lot of tools to both the actor and director, so I think it’s great for people who are just starting.”

Duren envisions a theater career in which she combines acting and directing, but perhaps strangely for an aspiring young professional, the bright lights of Broadway are not beckoning her. The Vista native wants to make it right here in her hometown.

“I’m not interested in going to New York, though I know a lot of my friends are,” Duren said. “I love the San Diego community; I always have. I don’t know if it’s feasible, but I would love to stay local for as long as possible.”