New CEHHS Dean Is CSU Through and Through 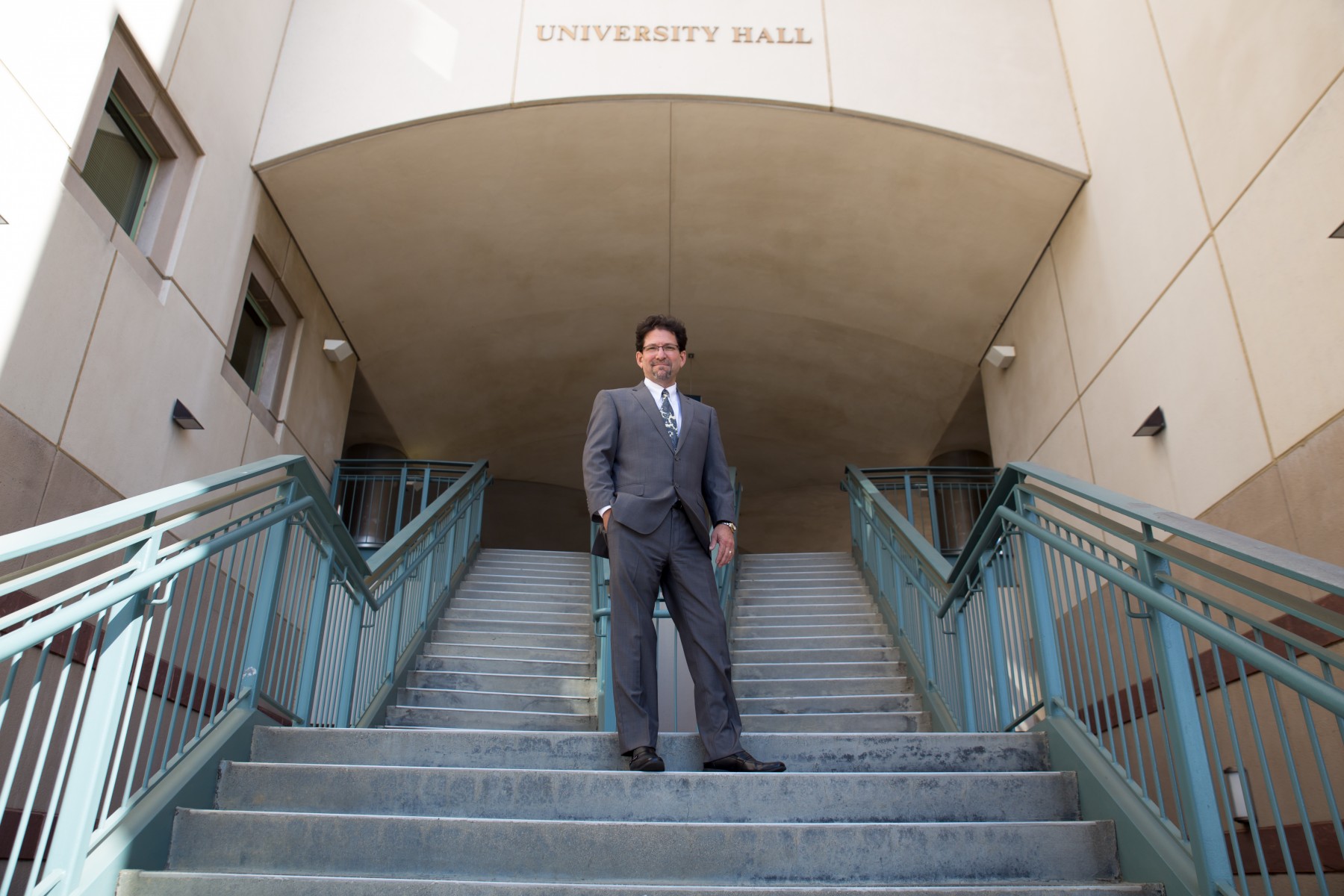 Emiliano Ayala
The new dean of the College of Education, Health and Human Services is in his first semester at Cal State San Marcos after nearly two decades as a professor at Sonoma State. Photo by Christine Vaughan

When Emiliano Ayala talks about how important the mission of the California State University system is to him personally, it’s the farthest thing from lip service.

Before he took over as the dean of Cal State San Marcos’ College of Education, Health and Human Services in July, Ayala worked for 18 years as a professor at Sonoma State, with a one-year stint in the middle as an associate dean at Humboldt State. For most of his time at Sonoma State, the dean he operated under in the School of Education was none other than his older brother, Carlos. Both brothers earned master’s degrees at San Diego State, and Emiliano also got his Ph.D. there.

Ayala’s older sister, Guadalupe, is a professor of public health at SDSU after earning master’s degrees from CSUSM and SDSU and a doctorate from SDSU. His father, Reynaldo, taught for years at SDSU’s Imperial Valley campus in Calexico. His mother, Marta, was a librarian at the same school.

And Ayala’s oldest daughter, Nastassia, is a graduate of Chico State.

“I chose the CSU,” Ayala said. “There were opportunities for me to look at other institutions, but I was like, ‘We are born and bred CSU.’ We are three generations of CSU. The mission is clear. This is what I need to be doing as a leader in higher education.”

Even within the CSU system, Ayala had plenty of other opportunities to pursue dean’s positions, but he opted for a growing college at a growing university within a growing region.

“I was really particular about what campus I was going to apply to – first just the portfolio of programs, the idea of health and human services, profession-driven programs and schools is what I deeply believe in,” he said. “That’s what attracted me. And what has been affirming for me in the last few months is that the faculty and staff truly care about the work they do.”

Of course, it doesn’t hurt that Ayala has returned home, in a sense, after almost two decades spent in the Bay Area. He and his wife, Cat, bought a house in Valley Center on a four-acre plot of land with avocado and blood orange trees and a million-dollar view of Palomar Mountain. It’s not far from where they met, 30 years ago at Felicita Elementary School in Escondido, where Emiliano was doing an internship as a school psychologist and Cat was a speech-language pathologist.

Also, it’s a drive of only a couple of hours from where Ayala grew up, in Calexico, right on the Mexican border – literally.

“We lived on Second Street, and First Street is the fence,” said Ayala, who has a photo in his office of people climbing over the fence to the U.S. side. “Growing up on the border involved very powerful experiences for me and really shaped how I view the world.”

Ayala jokes that he could write multiple books about his life and members of his extended family, and it all starts with his father’s wildly improbable story of immigrant success. Reynaldo Ayala was born into a very poor family from Saltillo, Mexico. His mother died when he was 4 and his father left his children behind, so he and his four brothers were sent to live with two elderly aunts. Reynaldo spent his childhood shining shoes and selling tortillas on the streets.

Fate intervened in the form of Irene Westling, a Minnesota woman who, after the death of her husband, decided to start taking trips to Mexico to study Spanish. On one of her tours, she met a 10-year-old boy who offered to shine her shoes and sell her tortillas. Thus began a lifelong relationship. Westling returned every year, and when Reynaldo turned 16, she asked the governor of Minnesota for permission to adopt him and bring him to America.

Thanks to the woman Emiliano calls “foster grandmother,” Reynaldo ended up attending the University of Minnesota, where, in Latin club, he soon met Marta Stiefel, an Argentinian who had been sent to the U.S. to be trained to help treat people afflicted by a polio outbreak in her country. 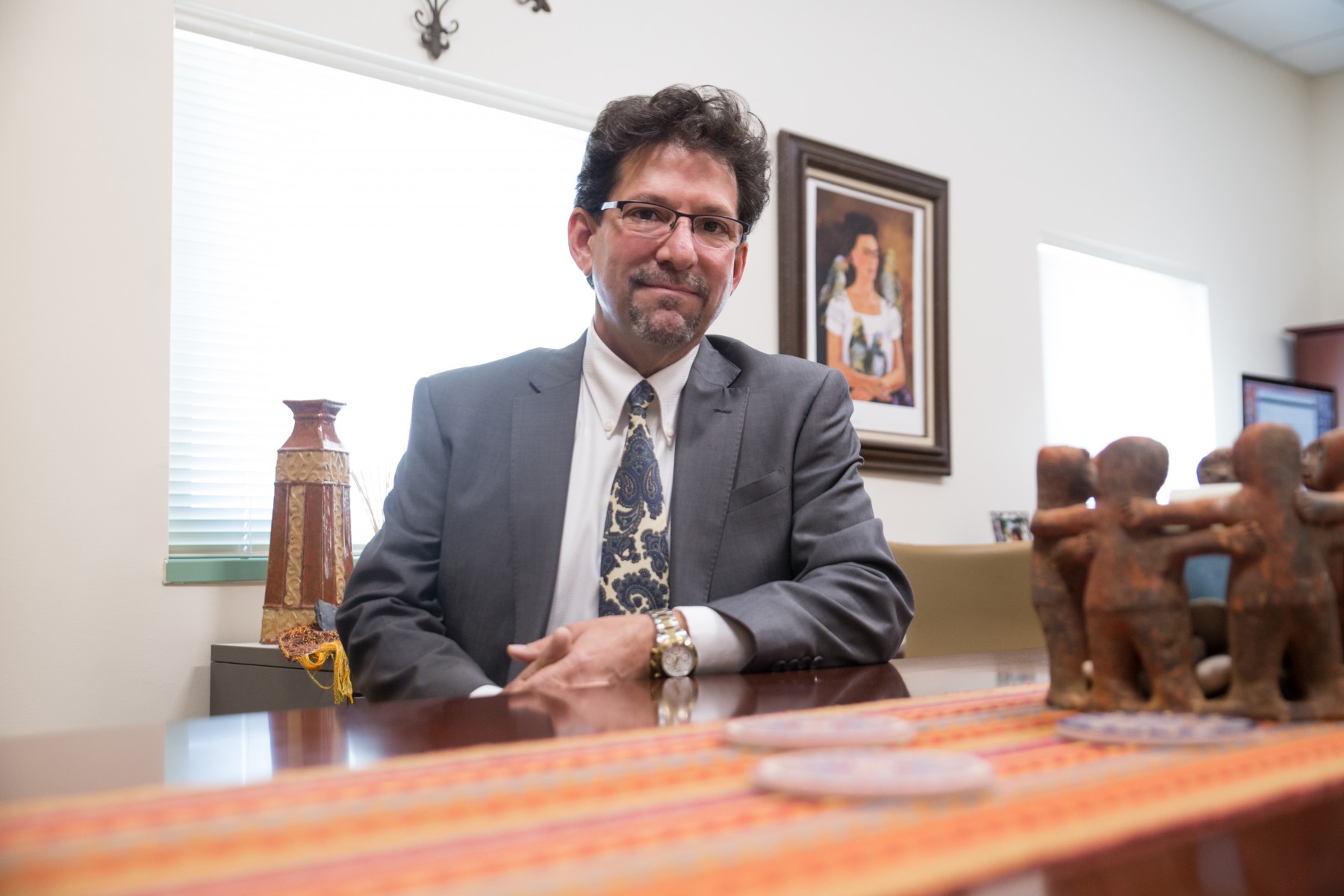 Emiliano Ayala
The new dean of the College of Education, Health and Human Services is in his first semester at Cal State San Marcos after nearly two decades as a professor at Sonoma State. Photo by Christine Vaughan

“The reason I’m here is a series of crazy circumstances,” Ayala said.

After Reynaldo earned his doctorate, the family settled in Calexico, but Emiliano and his siblings hardly had a traditional upbringing. Rather, their parents espoused what he describes as a “disruptive” education. Every few years, the kids would be pulled out of school as the family moved to another state or even country. One time, it was Arizona. Another time, it was Colombia. Multiple times, it was their mother’s native Argentina.

The most exotic – or crazy, depending on your perspective – instance came when Emiliano was a sophomore in high school in 1979. With his father on sabbatical from teaching, the family sold its house in Calexico, sold its cars, bought an RV, and drove to visit Irene Westling in Minnesota. That was the starting point of a six-month odyssey in which the Ayalas drove the length of the Pan-American Highway, from near the Canadian border to the tip of South America – visiting every country in between.

“It was incredible,” Ayala said. “The experiences I had, the places I saw, the people I met, the food I ate, you don’t see that happening anymore as a family, and it brought us closer together. We have so many stories from that trip.”

Ayala may not have lived in Calexico continuously, but he did have many formative experiences there. He remembers walking to the local 7-Eleven to buy a candy bar after earning 50 cents by doing some chore, and having Border Patrol agents – “Migra,” he called them – cut him off and interrogate him because they thought he had just jumped the fence illegally. He recalls going to a school where there were no students with disabilities because they were bused to a different city – beginning his lifelong interest in the field of special education.

“That was another life-defining moment for me to say, ‘What the heck, that’s not right. These are people, too,’ ” he said. “That racial discrimination, that targeting that I experienced, it made me want to look out for people with disabilities. You look in my high school yearbook, and under ‘what do you want to be when you grow up,’ it says, ‘high school special ed teacher.’ ”

Ayala indeed followed that path while exceeding his younger self’s ambition; after earning his Ph.D., he took his first professor job at Sonoma State in 2000, training teachers to work in special education. As his star rose at the university, he started to think about making the transition into administration, which prompted his move to Humboldt State as an associate dean in 2012.

By this time, both of his daughters were out of the house, with Nastassia at Chico State and Giselle starting her freshman year at Cal Poly San Luis Obispo. But in April 2013, tragedy struck. Giselle died after falling from a cliff near Santa Barbara during an annual spring break party.

“We had friends over at our house in Santa Rosa,” Ayala recalled. “There was a knock at the door; it was a police officer and a clergy standing there. It felt like something out of a movie. Immediately I thought, ‘What did Nastassia do?’ She’s the wild child, the risk-taker of the family. When they said Giselle had passed away, our world flipped. Nothing could ever change how you see the world again.”

Reeling from the loss, Ayala left his job at Humboldt State and returned to the comfort of his faculty position at Sonoma State. He came back a humbler, less self-important man.

“Before Giselle passed away, part of wanting to be an administrator in higher education was ego-driven,” he said. “Now as I look at it, the ego piece is gone. I don’t need to be right all the time. It doesn’t need to be all about me. It’s about our success, and our success is ultimately about how well our students are doing.”

Five years later, Ayala is again in an administrative role, advocating for students above all else. And though he’s on a new campus, he remains CSU through and through.

New CEHHS Dean Is CSU Through and Through