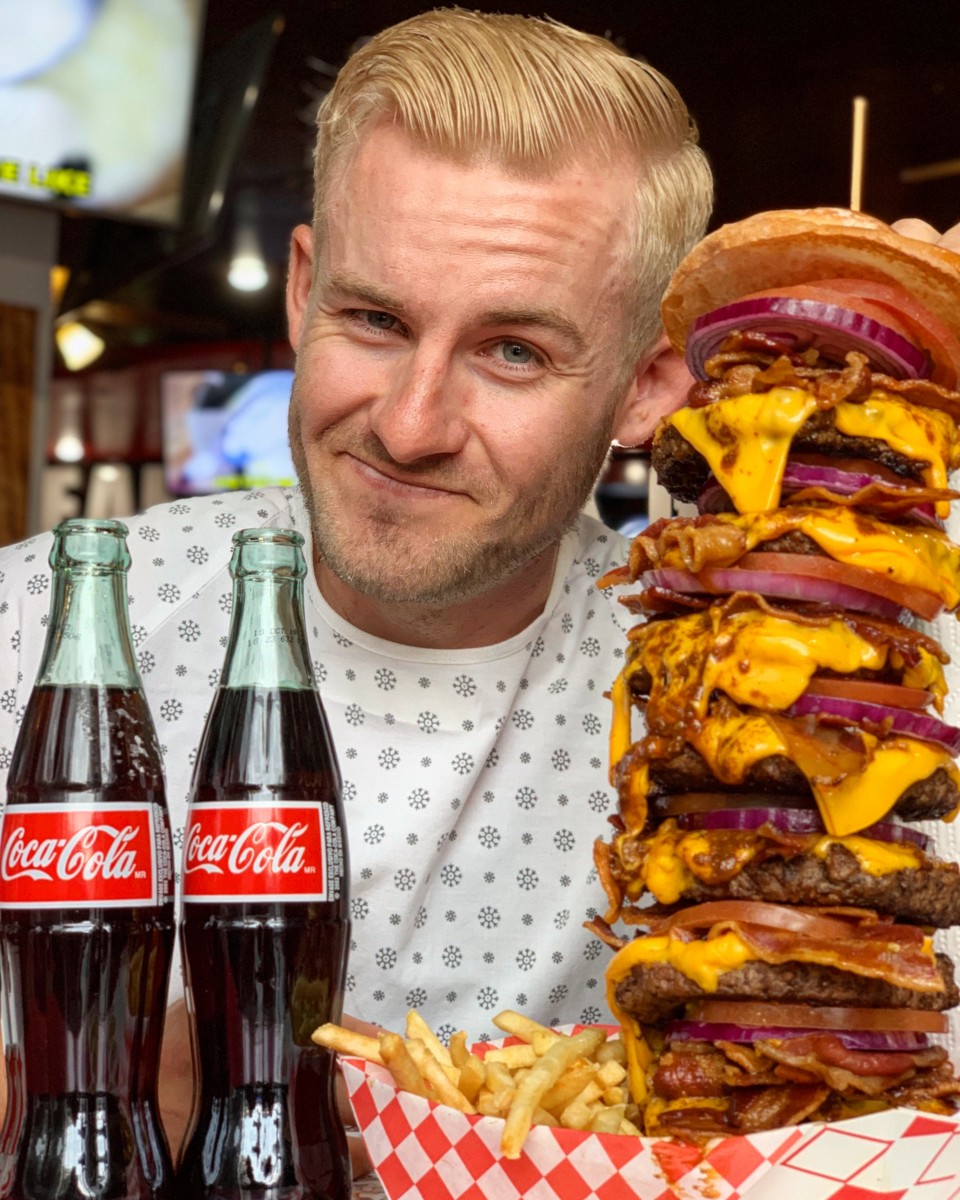 Erik Lamkin is just 26 years old, but he sounds a bit like a grizzled professional athlete closer to the end of his career than the beginning.

When your job requires you to gorge on thousands of calories in a single sitting, it’s safe to say you’re not in it for the long haul.

“I think I have a few good years left in me,” Lamkin said.

Lamkin (’17) plans to enjoy every minute for as long as he can.

Known on social media as Erik the Electric (his nickname in high school), Lamkin posts weekly videos on his YouTube channel that feature him taking on seemingly impossible food challenges – and sometimes they do actually prove impossible.

During his annual food tour last summer, Lamkin created his own challenge at Elm Street Diner in Stamford, Conn. He gave himself 45 minutes to polish off eight dozen doughnuts – yes, eight dozen – covered in 3 pounds of Nutella and sprinkled with white chocolate chips. The plate weighed 13 pounds, and the concoction added up to more than 20,000 calories. Lamkin consumed about 17,000 of those calories before the timer brought an end to his quest as he told viewers that he was throwing in the towel – in this case, the actual Nutella-stained towel he used to wipe off his hands and face as he ate.

Lamkin doesn’t fall short on food challenges often. Some are formal restaurant challenges – the kind featured on shows like “Man v. Food” – and many are simply ones Lamkin has dreamed up that feature him eating copious amounts of fast food or junk food. All are wildly popular.

“It was a hobby that turned into my career,” Lamkin said. “I wake up every single day excited to do what I do.” 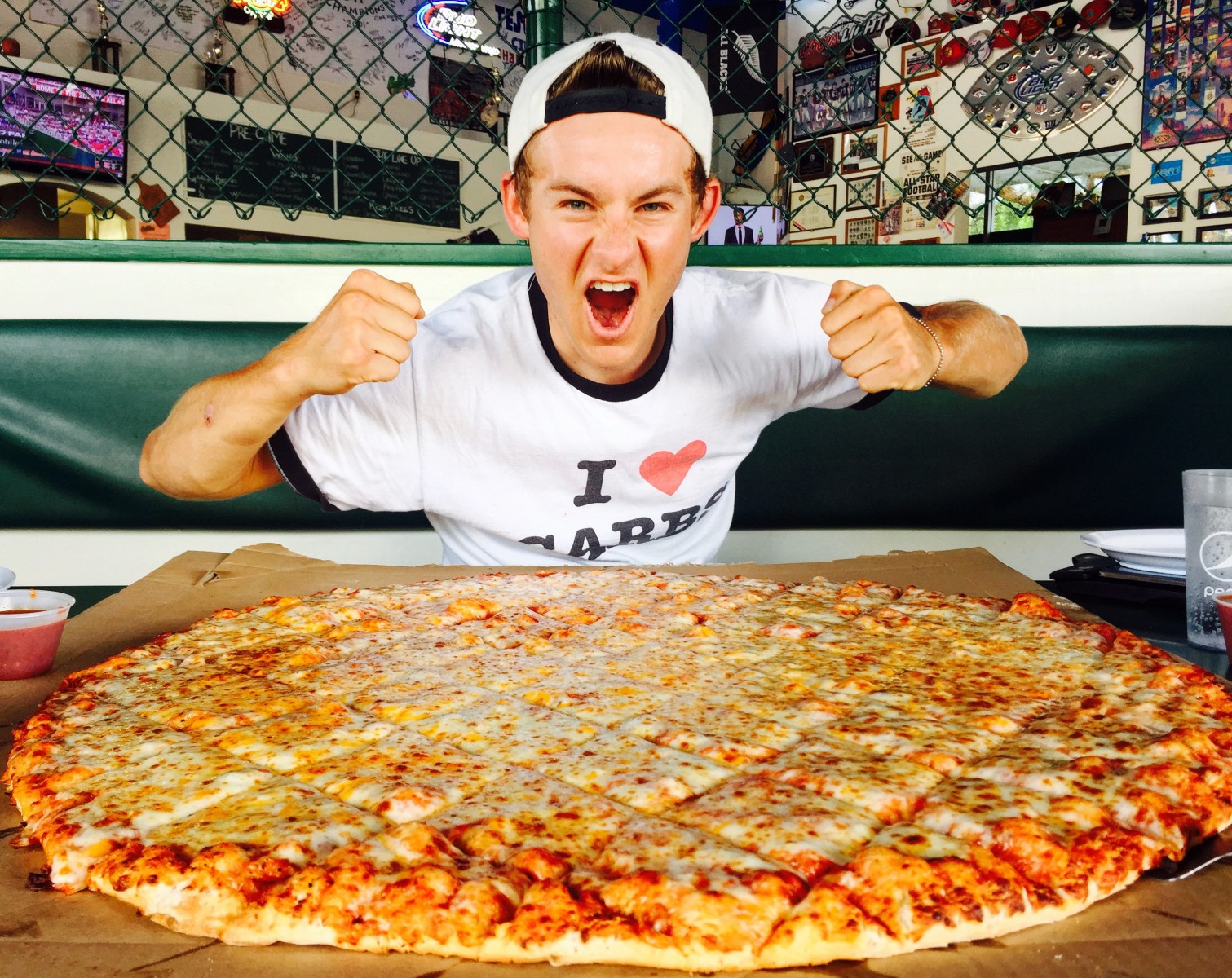 CSUSM alumnus Erik Lamkin, better known as Erik the Electric on social media, has more than 1 million subscribers on his YouTube channel, including large fan bases in the United Kingdom and China.

Not a day goes by that Lamkin doesn’t encounter at least one person asking, “What’s your real job?” But this is, in fact, his real job.

Lamkin’s videos have a total of more than 150 million views, including nearly 30 videos that have surpassed 1 million views each. That includes a July 2018 video in which Lamkin went on his first date with Kristie Higgs. They each took on a 5-pound burger challenge that included 1½ pounds of fries. Lamkin finished in less than 17 minutes. Higgs gave it a valiant effort before deciding it would be better to leave room for dessert (Lamkin partook in that, too). But the date was an unqualified success. More than a year later, Lamkin and Higgs are still together and have even started their own YouTube channel called The Electrics.

Lamkin’s charisma, coupled with his creativity in conceiving outlandish food challenges, has helped him gain a loyal – and massive – following. He has more than 1 million subscribers on his YouTube channel, including large fan bases in the United Kingdom and China.

Seeing Lamkin’s success as a competitive eater makes it all the more astonishing to learn about his battle with anorexia. Growing up in San Diego, Lamkin was overweight as a child before focusing on fitness as a teenager. But as his commitment to exercise grew, he became obsessed with his weight.

“When I was 16 years old, I was almost too scared to brush my teeth because I didn’t know how many calories were in toothpaste,” he said.

Lamkin’s weight dwindled to 115 pounds at its lowest point. During his sophomore year at Cal State San Marcos, Lamkin’s family pulled him out of school and sent him to a treatment facility. It helped him get to a better place mentally and physically.

Lamkin returned to CSUSM after completing his treatment and switched his major from business administration to communication, which he felt aligned better with his passion for entertaining people. Lamkin’s days were split between school and his job at a local bike shop while his nights were spent making videos, skills he had been honing since high school when he would post videos of himself playing guitar.

“They’d get like three views,” Lamkin said. “I’d hope that one of those views was a cute girl from my high school … but it wasn’t.”

While the guitar videos didn’t lead to any dates, Lamkin was becoming an expert in film editing and Photoshop, skills that would be critical to his later success as Erik the Electric. People tend to think of him solely as a competitive eater, but Lamkin estimates that at least 80% of his time is spent editing. 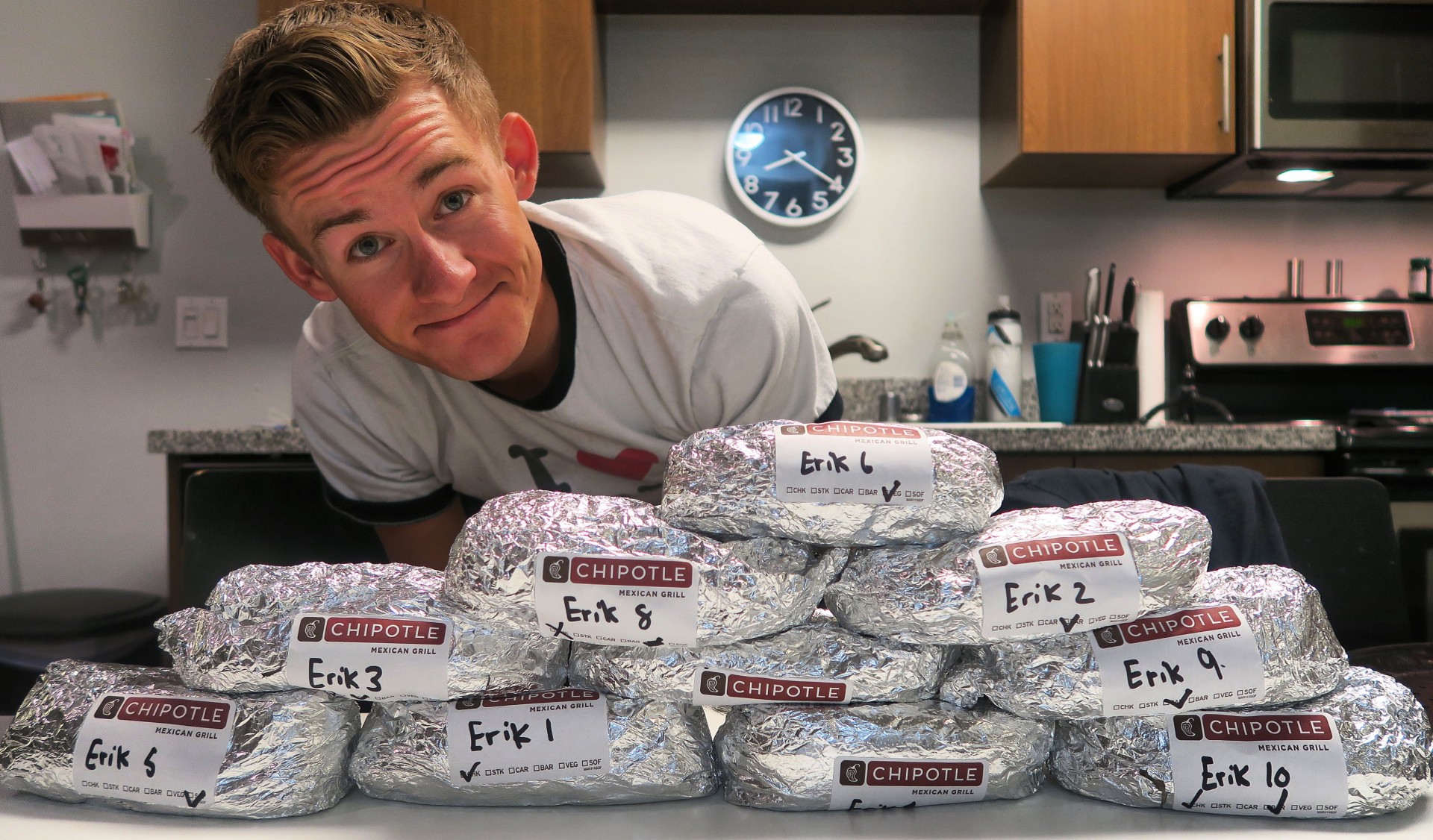 CSUSM alumnus Erik Lamkin, better known as Erik the Electric on social media, took on a Chipotle burrito challenge in 2015, attempting to polish off 10 burritos in an hour.

Lamkin’s YouTube channel had about 100,000 subscribers when he was approached by a YouTube network, which assists users in growing their channel in exchange for a cut of their earnings. Lamkin decided to give it a shot, and the decision paid off beyond all of his expectations.

“I never would have imagined that people from all around the world would want to watch,” he said. “When I go on YouTube, I don’t watch food videos. I go on to see if I can fix my computer cord or something like that. But food is one of those things that everybody can relate to.”

While Lamkin’s YouTube viewers are accustomed to seeing him devour thousands of calories at a time, his diet consists primarily of chicken and vegetables when he’s not doing a challenge. He works out religiously, and it’s an important part of his routine on the day of a food challenge.

It takes Lamkin up to 24 hours to fully recover from challenges designed around fast food or junk food. Restaurant challenges are easier on his body – “it’s usually a lot less food and not a ton of sodium,” he says – and he would eventually love to transition to doing a TV show that focuses on food and traveling.

After his battle with anorexia, Lamkin pays close attention to his health. He gets blood work done quarterly and said he wouldn’t do the food challenges if his health diminished.

While he readily acknowledges the ticking clock on a career as a competitive eater, he also is making the most of every moment. He loves to engage with his viewers, whether it’s someone who wants to know about his next food challenge or someone who wants to talk about how his story of overcoming anorexia has inspired them.