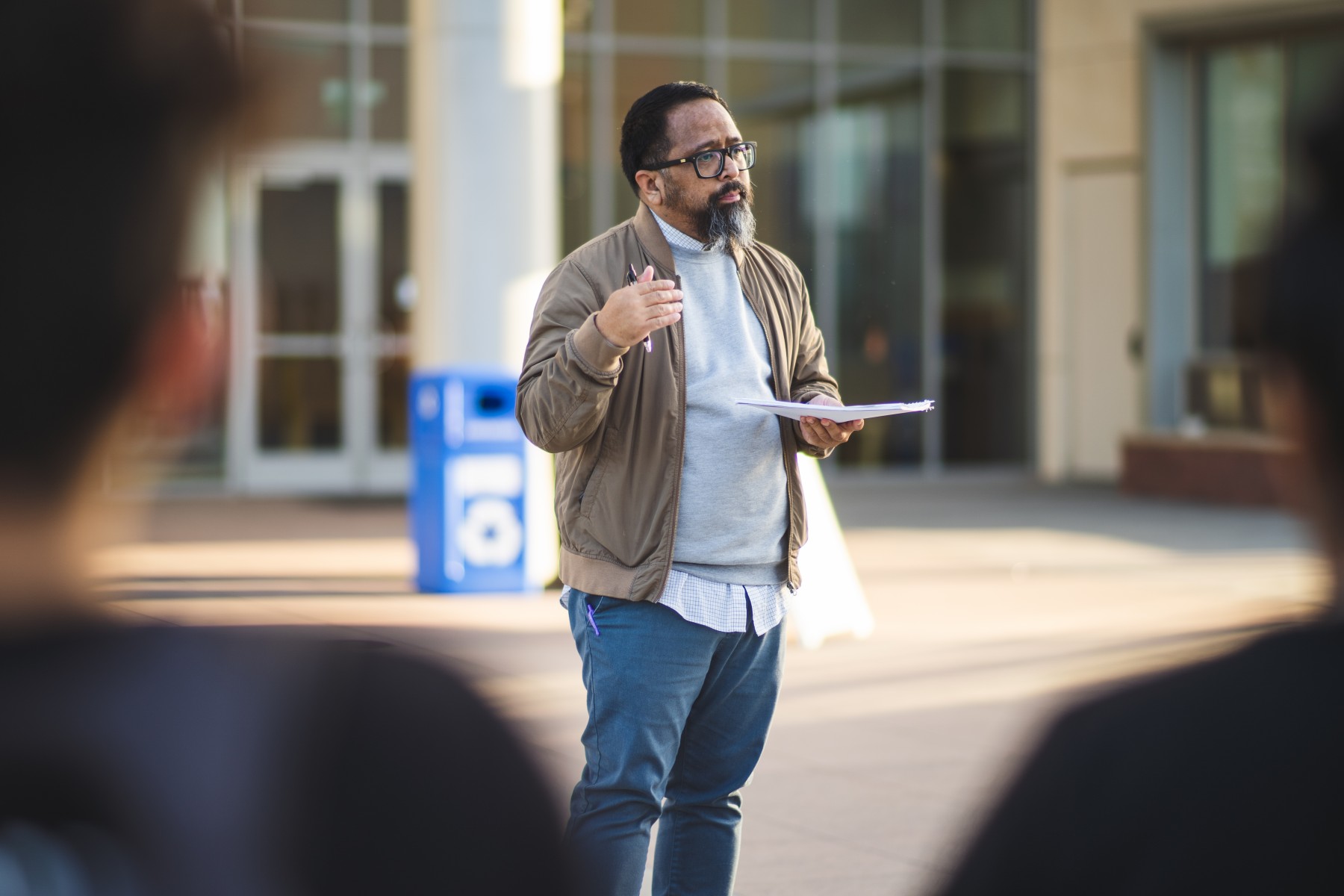 For Jason Magabo Perez, it’s not enough to stand in front of his Ethnic Studies classroom and lecture.

In his teaching career, Perez has never been content with simply assigning readings, distributing exams and grading papers.

The first-year Cal State San Marcos assistant professor subscribes to the idea that hands-on learning sticks with students longer. The world is the best classroom in Perez’s philosophy.

Hence was born the Ethnic Studies Pop-Up Gallery, an interactive campus-wide project put on by Perez’s Ethnic Studies & Society 301 course this spring. The interactive space is located on the first floor of the Social and Behavioral Sciences Building and has been showcasing events and projects since Jan. 21. It runs through May 8.

“Our class focuses in part on the practical application of Ethnic Studies theories and methods within a community context,” said Perez, who holds a dual Ph.D. in Ethnic Studies and communication from UC San Diego. “Being new to CSUSM, I figured as a class we could build community and amplify our conversations in Ethnic Studies locally on campus. When I was tasked with designing the display case to showcase the Ethnic Studies program, I thought it would be a great opportunity to turn this project over to the students.”

The interactive transmedia space aims to generate community dialogue about the histories, literatures and contemporary concerns of Ethnic Studies. Throughout the spring, this space will display research artifacts and projects created by students enrolled in ETST 301 and books relevant to, inspired by and produced for Ethnic Studies.

Flash lectures, writing workshops, impromptu performances and other activities will highlight the semester-long project. All of the events are free and open to the public.

Perez has been impressed with the work his students have created.

“The students have produced some very thoughtful blackout, erasure and cento poems based on Third World studies and Third World feminism,” said Perez, who was an assistant professor of English at Cal State San Bernardino before coming to CSUSM. “I think these sort of experiments are surprising because they provide new angles to encounter the histories of Ethnic Studies.” 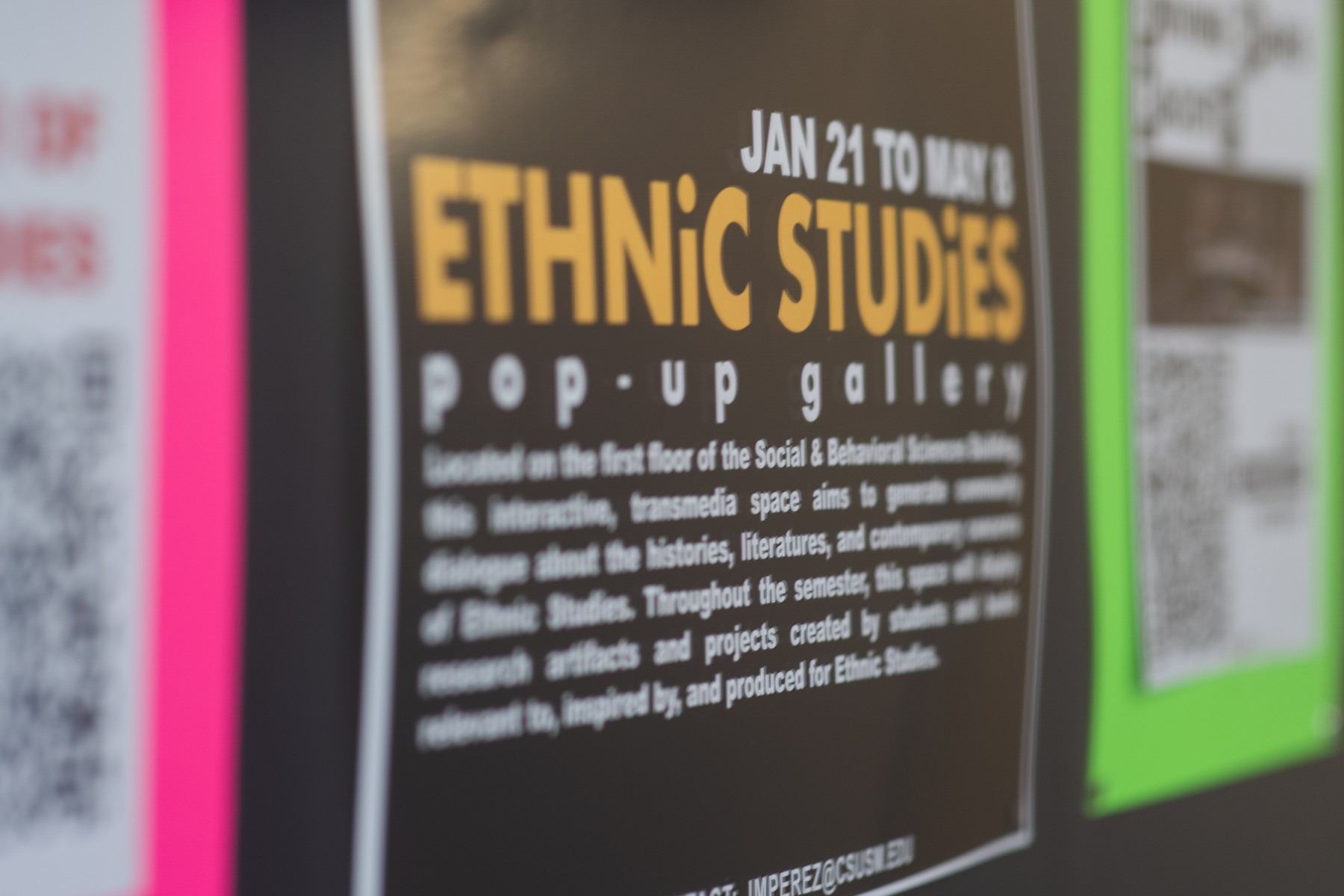 The Ethnic Studies Pop-Up Gallery, an interactive campus-wide project located on the first floor of the Social and Behavioral Sciences Building, is showcasing events and projects through May 8.

Perez had his Cal State San Bernardino students produce a similar project but on a smaller scale. Pop-up art galleries, which have become so significant and inspirational the past couple of decades, helped form the basis for taking it to a grander scale.

He was also inspired by the recent pop-up library at Yale, staged by the Coalition for Ethnic Studies, that was created to address the lack of support for its Ethnic Studies faculty. 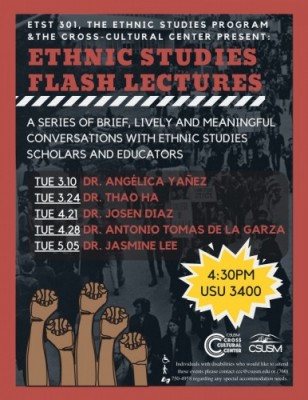 “The pop-up gallery and library has become such an empowering mode of community engagement,” said Perez, who is the author of two hybrid collections of prose and poetry, “Phenomenology of Superhero” and “This is for the mostless.”

“The pop-up format as a performance, as a public intervention, can really push the conversation further. Our efforts here are linked to a broader commitment to Ethnic Studies, its histories, it present and its futures.”

The project will also showcase a visiting lecture series featuring professors from San Diego colleges – including CSUSM assistant professor of communication Antonio Tomas De La Garza on April 28 – as well as a couple from Perez’s former school. Some of the topics include the struggle for Ethnic Studies, racial justice, women of color feminism, popular culture and educational justice.

In selecting the lecturers, Perez reached out to colleagues he has worked with or is currently working with.

“I’m part of the San Diego County Ethnic Studies Consortium, which is a collaboration among Ethnic Studies programs and departments across San Diego,” Perez said. “When I put the call out, and when schedules aligned, colleagues were more than willing to donate some time and energy and come build with our students.”

Budget cuts for almost five decades have threatened the future and stability of Ethnic Studies, according to Perez. However, that could be changing. AB 1460, if it passes, would make Ethnic Studies a graduation requirement for all CSU students.

“Ethnic Studies is about the students and their local communities,” Perez said. “Even as students are beginning to engage the questions and principles of Ethnic Studies, I think it’s important to always make sure those conversations happen and are understood in the broader context of social justice, decolonization and liberation.”

All flash lectures and programs will take place at 4:30 p.m. in an area near the gallery.