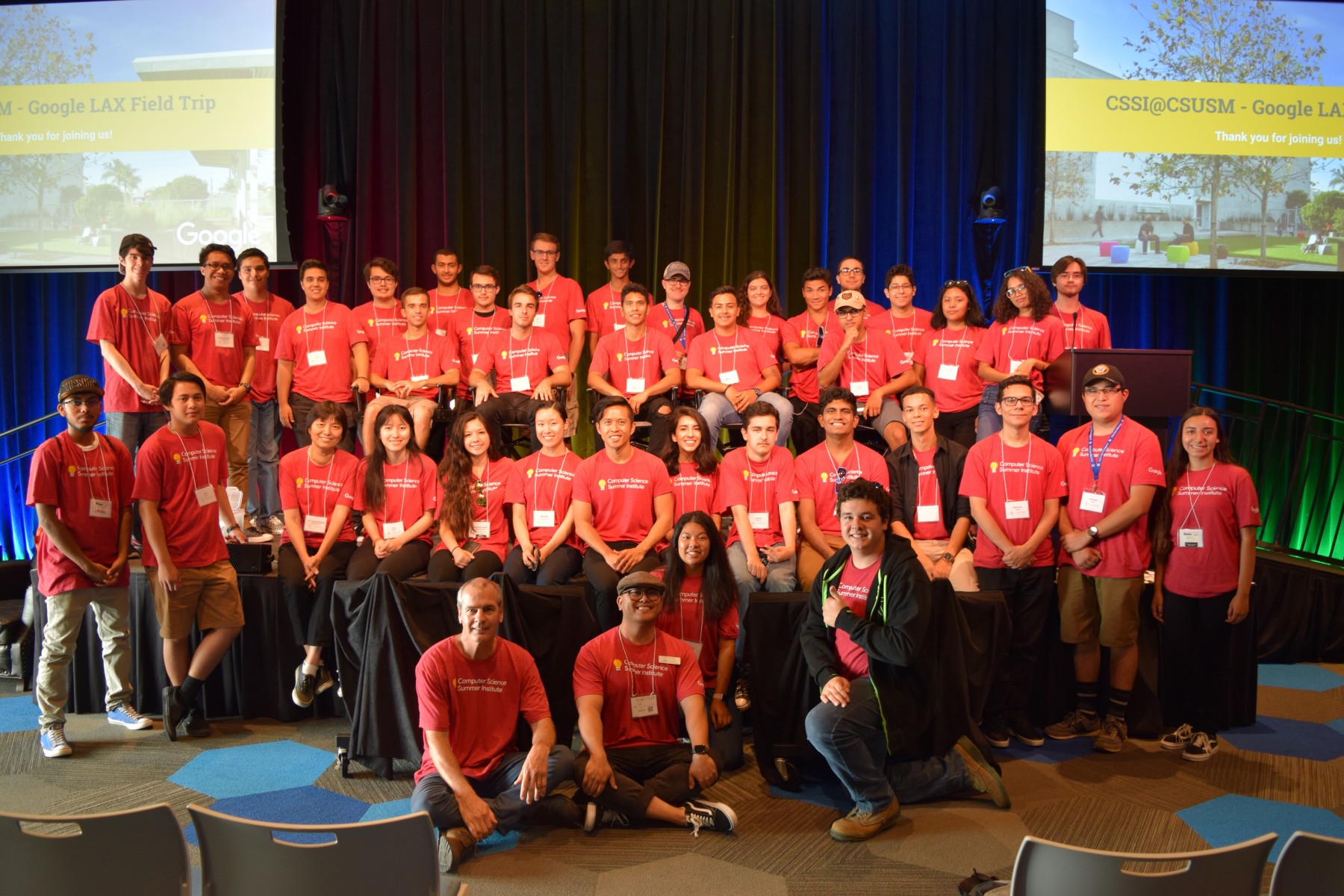 Computer Science Summer Institute
CSUSM was one of three California universities to host Google’s CSSI this summer. Participants had an opportunity to take field trips to Google LAX in Los Angeles and Hunter Industries in San Marcos.

Marissa Beltran was concerned that she might not have the necessary coding experience to thrive in Google’s Computer Science Summer Institute (CSSI) Extension program.

It didn’t take long for her to realize she had nothing to worry about.

“As long as you have the motivation, you can do it,” said Marissa, one of 30 incoming Cal State San Marcos freshmen who participated in the three-week program last month.

CSUSM was one of four California universities to host a CSSI-Extension this summer. The program introduces incoming college freshmen to computer science through interactive, hands-on activities culminating in a presentation of group projects.

“We’re excited about this program and the opportunity to build confidence and community among students who have historically been underrepresented in STEM career fields,” said Ray Sawyer, a Student Development Specialist at Google.

More than 100 incoming freshmen applied to the program at CSUSM.

Youwen Ouyang, chair of the Department of Computer Science and Information Systems, led the program. The students learned basic programming fundamentals and worked in small teams with one of six teaching assistants to design and develop their own applications. Jeffrey Morales, the Engineering Pathways Advisor, also worked with participants on developing their soft skills.

The program was funded by a Hispanic-Serving Institutions STEM grant from the U.S. Department of Education.

“The CSSI program is the beginning of our efforts to have students traditionally underrepresented in STEM participate in grant-related activities and increase their graduation rates,” said Ricardo Fierro, associate dean of the College of Science and Mathematics and project director of the grant.

Students lauded the program both for the computer science knowledge they gained and the opportunity to collaborate with faculty, staff and other students.

“Not only did we get to learn how to code in all these languages, but we made connections with faculty, the TAs and with each other,” said Anahi Badillo, a program participant.

“This program really encouraged me to get more involved,” added Thao Phung. “In high school, I wasn’t in any clubs. When I saw the email about this program, I wasn’t sure. But I took a risk, and it paid off. I made a lot of friends, and it was really fun.”

On the final day of the program, the teams presented their apps to the entire group and other invited guests. One of the apps was geared toward tourists visiting San Diego; another would enable CSUSM students to determine when and where pick-up games for a variety of sports are being played; and a third aimed at informing users about the latest trends in books, games, movies and music.

It wasn’t just the participants who found the program valuable.

Samuel Mueller, one of the teaching assistants and a veteran, enjoyed tutoring the incoming freshmen in the summer program.

“I’m passionate about getting computer science out there,” said Samuel, a second-year computer science major at CSUSM. “A lot of people don’t know what they’ll be good at until they try it. It’s important that they get the opportunity to explore different elements of it and build their confidence.”

Samuel noted that the program introduced him to industry professionals through field trips to San Marcos-based Hunter Industries and Google in Venice Beach.

“The students arrived wondering if they belonged in computer science,” Fierro said. “The program provided them with the opportunity to meet other majors and learn and enjoy basics of coding and teamwork. The field trips added an extra dimension to the program. Soon they realized they do belong here. They’re identifying now as computer scientists.”