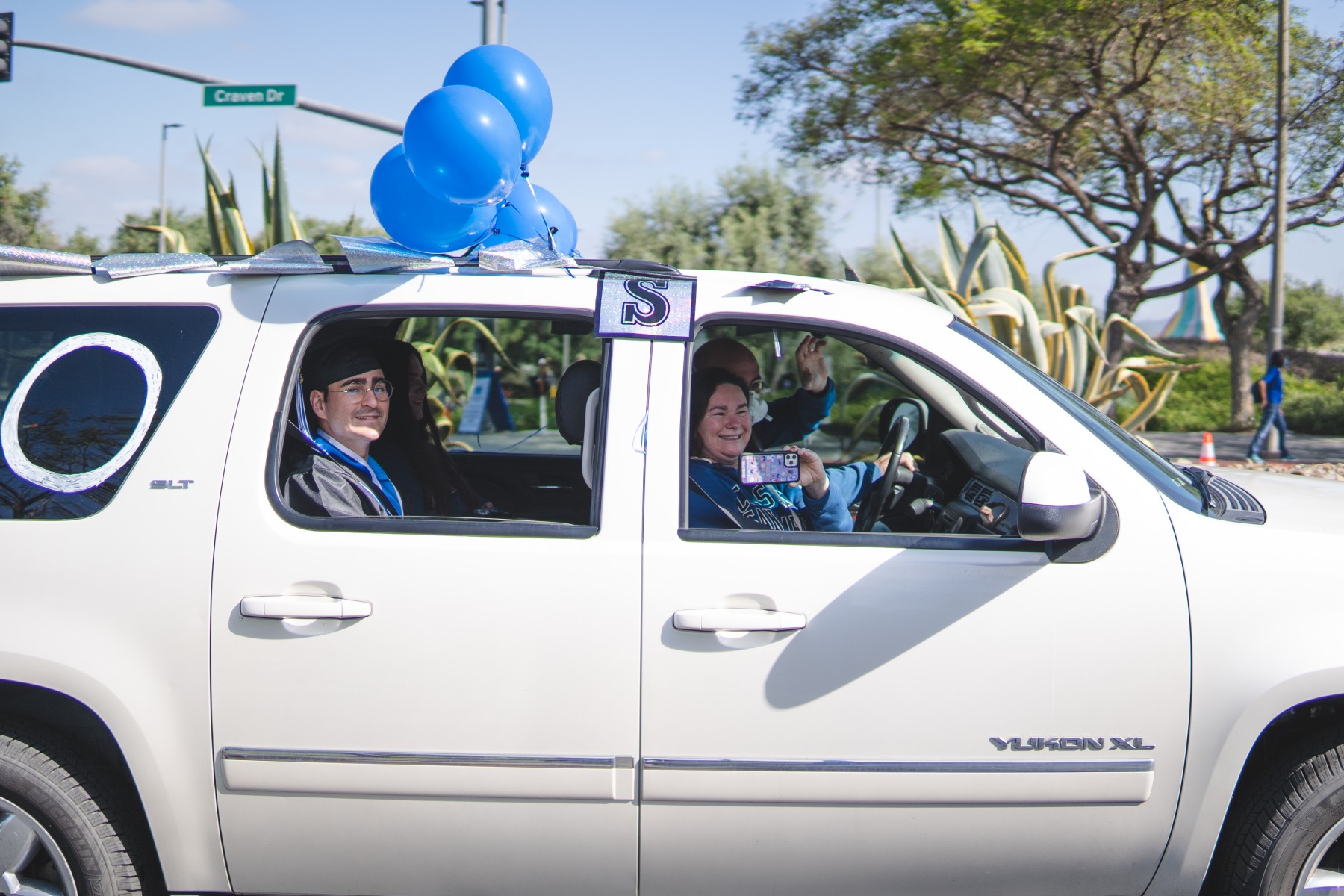 Class of 2020 graduate Pascal Jardin (rear seat) participates in the recent Graduates on Parade event with his mother, Maryrose (passenger seat) and his father, Cary (driver). Maryrose and Cary graduated from CSUSM in 1995. Photo by Alan Brown

Like hundreds of other members of the campus community, the Jardin family eagerly participated in the Graduates on Parade celebration at Cal State San Marcos on Friday, May 15.

They decorated their car with markers, streamers and balloons, piled in, and winded their way through the parade route with their windows down, all the while honking their horn and basking in the congratulatory shouts and claps from the faculty and staff lining the street.

It was unlikely, though, that any of the hundreds of other cars had such a strong concentration of CSUSM connections.

In the right rear seat was Pascal Jardin, decked out in cap and gown, a Class of 2020 graduate in computer science.

In the front passenger seat was Pascal’s mother, Maryrose, a 1995 CSUSM alumna who returned to the university this spring to take a class in preparation for starting a master’s program in mathematics next year.

Driving the vehicle was Pascal’s father, Cary, also a 1995 alumnus who also returned to CSUSM this spring in the role of computer science lecturer.

And sitting beside Pascal in the backseat were his two younger sisters, Caprice, 17, and Bellarose, 14, who already have taken math classes at Palomar College and intend to transfer to CSUSM down the road.

“We love Cal State San Marcos,” said Maryrose Jardin, who transferred here from Palomar with her future husband back in the early 1990s, when the university accepted only transfer students. “Cary and I almost grew up together going there. We’d take different classes together and study together. Of course, the campus is way more beautiful now than when we were there – it was mostly just cement then.

“Going back there now, everyone is very friendly, and it has a vibe of good, positive energy. It’s not like one of those huge campuses where you can get lost in the crowd.”

In the semester that just ended, Pascal Jardin was taking his final two courses toward the completion of his degree. Maryrose was taking an upper-level math class at CSUSM through Open University. And Cary was teaching Computer Science 351, a course on programming languages. The three of them frequently would carpool to campus from their home in Poway. They would meet at Starbucks for coffee breaks.

“We were treasuring every day that we were on campus together,” Maryrose said. “We knew that it was special, but we didn’t realize how special it was until it abruptly ended.”

On March 11, CSUSM announced that it would be switching to virtual instruction for the rest of the semester because of the coronavirus. The next day, a Thursday, Maryrose had her final in-person exam, Cary delivered his last in-person lecture, and the Jardins shared their last coffee and car ride as a group.

“We all had our moments of crying, like, ‘That’s it, that was the last day of school,’ ” Pascal said. “It really sucks that the pandemic happened this semester because it was so great having my parents on campus with me. Sadly, I’m never going to be able to do that again.”

The Jardin family: (left to right) Pascal, Bellarose, Cary, Caprice and Maryrose.
Pascal Jardin decorates the family car in Poway as he prepares for Graduates on Parade last week.
Pascal is a CSUSM computer science graduate, like his father 25 years ago.

Maryrose said the trio all made a quick and successful transition to remote learning and instruction. Pascal, in particular, had designed his classload to be light so he could get a head start on his job search, and if he has struggled with anything related to COVID-19, it’s a job market that he has found to be distressingly barren, despite his advance preparation.

“Everything is on hold, and there are a ton of job scams,” said Pascal, who’s seeking a position as a junior developer in the San Diego region. “The entire job market right now is a complete mess.”

Cary Jardin is a computer scientist and inventor who owns multiple businesses, including Jardin Labs, which contracts with companies on software development, database management and many other services. He also invented a technology called AccendoWave, a non-pharmaceutical opioid alternative that uses a headband to read a patient’s electroencephalography system and tries to distract them from the pain they’re experiencing. The device has been proven to reduce discomfort in 83% of patients in a clinical setting.

“He’s always creating his own things,” Maryrose said. “He’ll literally wake up in the morning and be like, ‘I have a new idea.’ He’s just one of those people.”

During his time at CSUSM more than 25 years ago, Cary had been mentored by computer science professor Rika Yoshii. When Yoshii learned that Pascal, one of her students, was Cary’s son, she invited him to speak to a group of students (including Pascal) who were competing in the same computer programming event that Cary had done as a student. His guest talk was so well received that Yoshii offered an opportunity to be a lecturer in the spring.

Maryrose was proud of her husband, but also a bit envious. She had always aspired to be a math teacher, but raising her children while helping Cary run his businesses took precedence. With the kids now older – Bellarose just finished eighth grade – seeing Cary get a lecturing gig was all the inspiration she needed. Maryrose plans to start the master’s program at CSUSM next spring and earn her degree within three years. She hopes to teach at the community college level or even at CSUSM like her husband.

“Jumping back into a college class after 25 years was challenging, but as I started doing more, I could feel my brain kicking in more,” she said. “I know it’s good for me. I love the school atmosphere, and I love learning. I always have.”

Pascal graduated from high school a year early (like his father and his middle sister) and thus missed out on the formal ceremony. He didn’t really know what to expect from CSUSM commencement, but his parents did and were initially crushed when the celebration was postponed indefinitely due to COVID-19.

Graduates on Parade presented a reasonably satisfying substitute. Pascal decorated the family’s white GMC Yukon and, on the morning of the parade, excitedly donned his cap and gown. As the Jardins exited Highway 78 at Twin Oaks Valley Road, their anticipation built as they spotted many other cars similarly dressed up for the occasion.

Nothing could prepare them, however, for actually driving the parade route, for being back on campus together for the first time in more than two months.

“Seeing so many CSUSM staff cheering on the students was fantastic,” Maryrose said. “We felt very grateful for their support and praise for the students. I pretty much had happy, emotional tears the entire time.

“The parade helped give us closure and Pascal recognition for all the hard work he has put into graduating with honors. It was an opportunity to celebrate him and all the other students who achieved their goal." 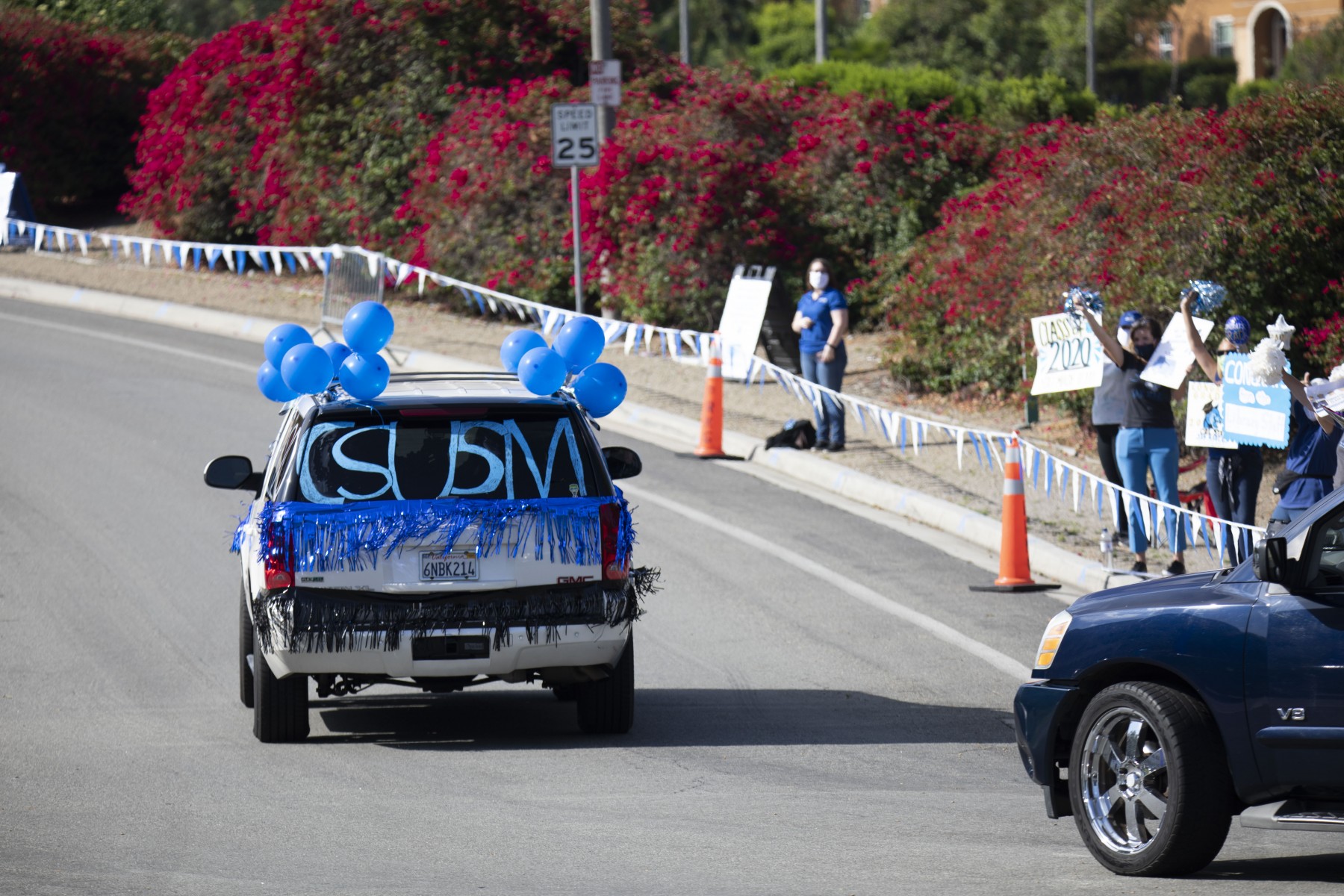 The Jardin family drives up Palm Canyon Drive during Graduates on Parade. Photo by Andrew Reed