Theater Professor Knows All About 'Sweat' 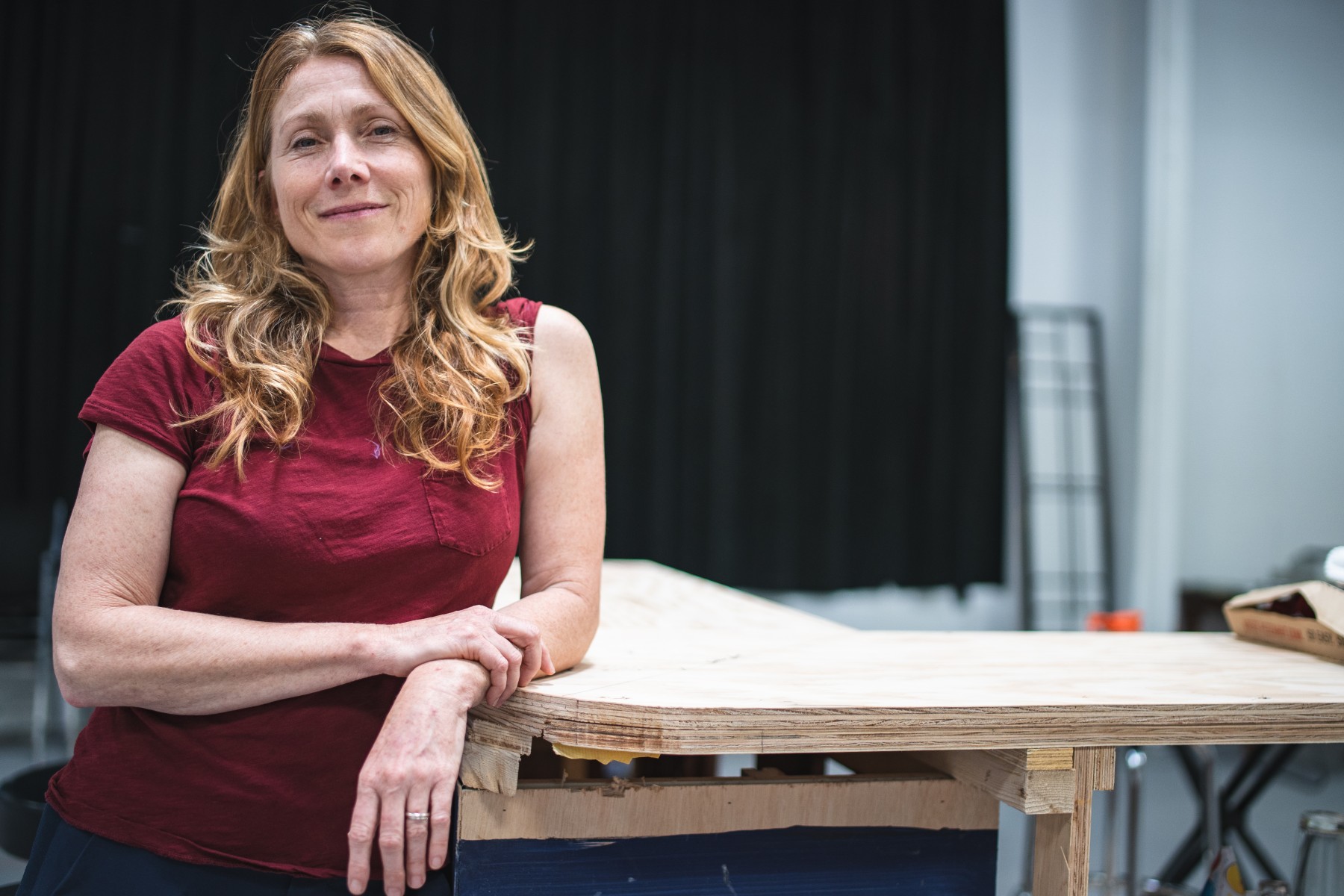 Judy Bauerlein
The CSUSM theater professor has a starring role in the play "Sweat," which will run at the downtown San Diego Repertory Theatre for three weeks starting April 18. Photo by Alan Brown

Judy Bauerlein has lived in Southern California for more than a decade, but she still has Pennsylvania in her bones.

Bauerlein was born in Ambler, a northern suburb of Philadelphia, one of 11 children in a family that’s a hodgepodge of German, Irish, Italian and Dutch blood. Her grandfather was a machinist in a steel factory, an emblem of the industrial, working-class roots of the Rust Belt state. She has shed the traces of the distinctive Philly accent that she marinated in during her childhood, but it occasionally surfaces when she’s had a couple of Rolling Rocks and is watching her beloved Eagles.

So when Bauerlein, a professional actress and a theater professor at Cal State San Marcos, first heard about “Sweat” – a Pulitzer Prize-winning Broadway play about a group of friends in the economically distressed town of Reading, Pa. – her curiosity was piqued immediately. And when she discovered that the play would be produced locally, by the downtown San Diego Repertory Theatre, she knew she had to be involved.

Bauerlein reached out to the casting directors last year and left them tickets to see her in a different play through the La Jolla Playhouse.

Bauerlein, as you can tell, gravitates to “pretty tough cookies,” in keeping with her steel-country origins. In “Sweat,” she got the part of Tracey, the lead role in an ensemble cast, and she will be on stage at San Diego Rep for three weeks starting on April 18.

“Sweat” is the brainchild of Lynn Nottage, who was inspired to write a play about life in Reading by a 2011 New York Times article that described the city as having the worst poverty rate in America. In the wake of the Great Recession, Nottage went to Reading and began interviewing residents, exploring the effects on them of the wide-scale loss of industrial jobs and the town’s changing ethnic composition.

The result was a play that premiered in 2015, opened on Broadway two years later, and won the Pulitzer Prize for Drama that same year. Set mostly in a bar, “Sweat” jumps in time between 2000 and 2008, focusing on a community of friends who have been working at the same Reading factory since high school. As the play progresses, the factory is shuttered, relationships strain and fracture, and lives become broken by racial strife and drug addiction.

Bauerlein’s character of Tracey devolves from a proud worker who derives much of her identity from union labor to an unemployed, disabled opioid addict. The differences between Bauerlein and Tracey are stark – her advanced degrees and desire to branch out beyond her hometown would be foreign to Tracey – but she also connects to the character in important ways.

“Her sense of humor is like my sense of humor. She’s a wise ass, and I am, too,” Bauerlein said. “And I really relate to her love of work. Until I switched and completed a Ph.D. program, I did things like wait tables and bartend to support my acting career.”

Bauerlein plans to adopt the Philly accent for her role, and she’s excited to play a scene in which Tracey is high on heroin (which the character moves to after she runs out of prescription pain medication). To prepare for that scene, Bauerlein consulted her brother-in-law, a substance abuse counselor in Pennsylvania, and studied videos on YouTube. She also drew on her time living in New York City in the 1990s, when she frequently would encounter heroin-addicted people on the streets.

“I remember watching people go up the subway stairs and they’d be holding on to the rail and their eyes were open but they couldn’t finish the action of taking a step,” she said. “It was so fascinating. I love working with physical impediments on stage, so when I saw she had that one, I was like, ‘Oh, that’s going to be really fun to play with.’ ”

Bauerlein has scaled back her involvement in acting since she started teaching at CSUSM in 2007. She aspires to do one play a year, but it’s easy to see why even that level of commitment is daunting. Besides the demands of her faculty job, she has a 10-year-old son, and performing in “Sweat” requires a lot of just that. Rehearsals took place from 12:45 to 9 p.m. six days a week for three weeks (in Chula Vista, no less), and the production schedule features six or seven shows a week for almost a month.

“It’s strenuous, but it’s also a lot of fun,” Bauerlein said. “Acting is a really special, sacred thing to me. Sometimes in your regular old day, you get a connection where you’re looking somebody in the eye and saying something that you feel very deeply and having them really hear you. But in theater, you do that all the time, and it’s just awesome.” 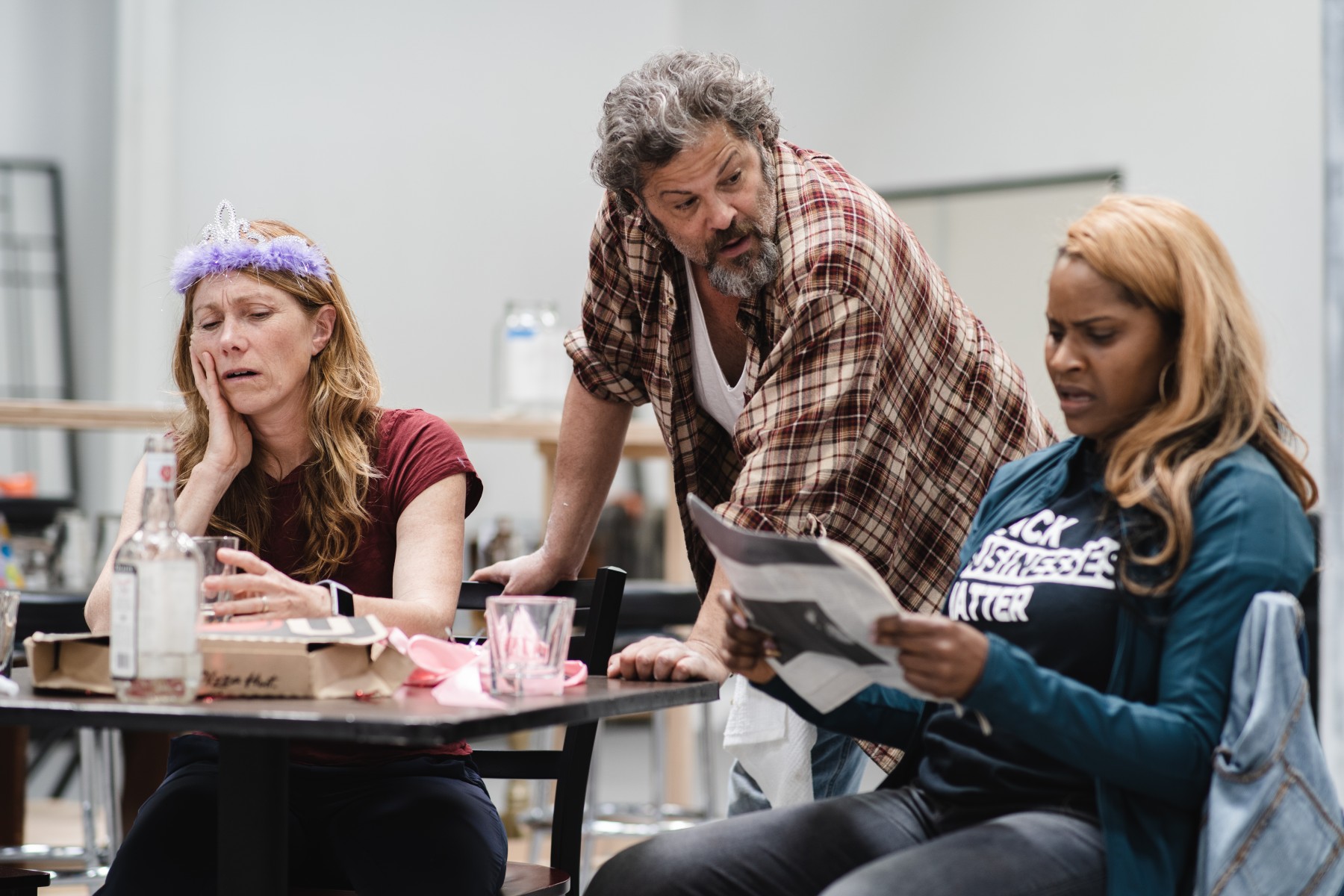 Judy Bauerlein
The CSUSM theater professor (left) is pictured during a rehearsal for "Sweat," which takes place mostly in a bar in industrial Pennsylvania. Photo by Alan Brown

Theater Professor Knows All About 'Sweat'