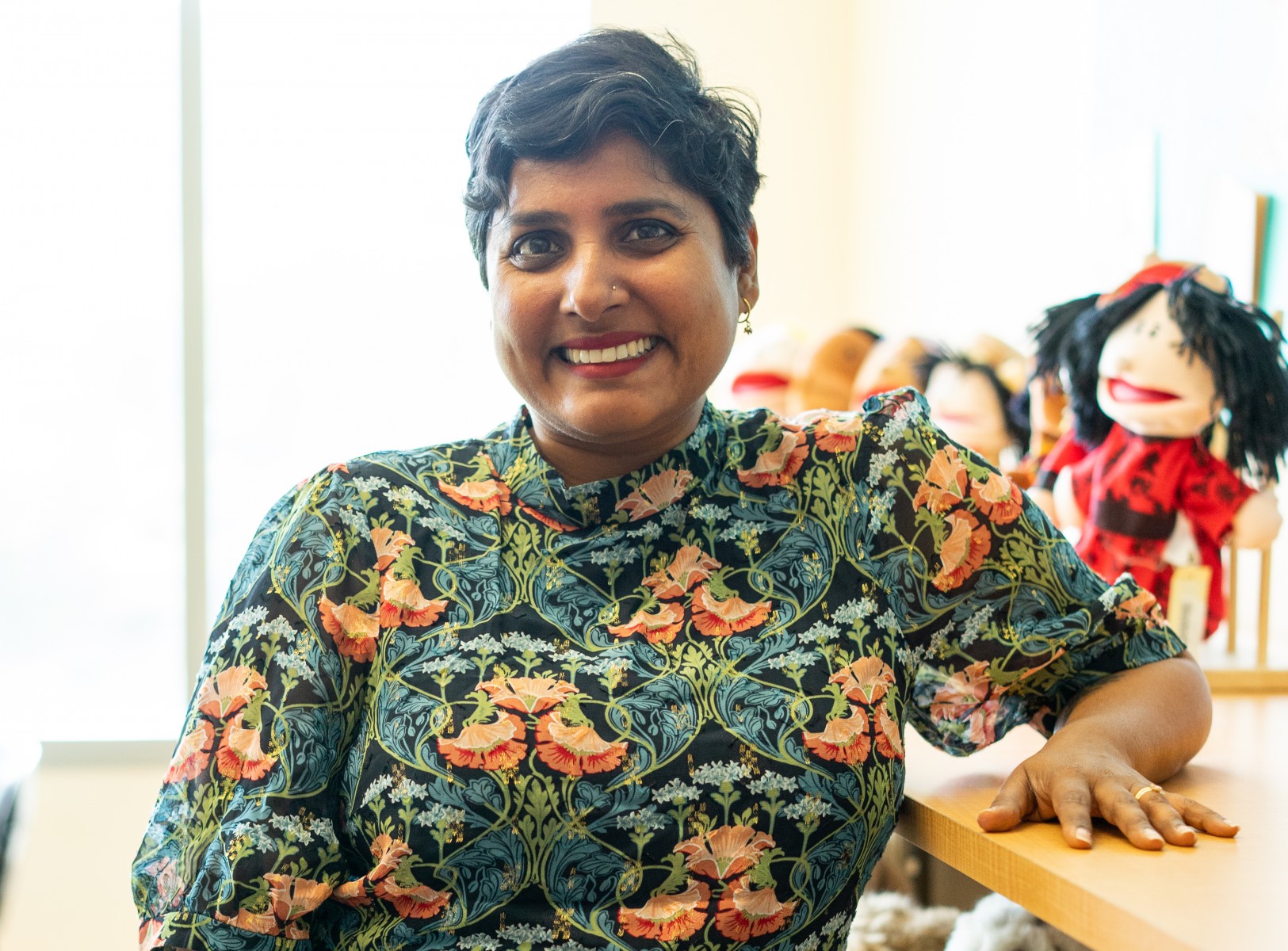 If she were to list the truly unbelievable days in her life, Lalitha Nataraj will most likely forever put a fall day in September 2017 at or near the top.

Having just stepped onto dry land following a Disney cruise with her family, the librarian and lifelong reader was making her final preparations to begin working in the Cal State San Marcos library when she received an email that would forever change her life.

The email was from Nina Lindsay, then-president of the Association for Library Service to Children (ALSC), which is a division of the American Library Association. The subject matter was an invitation to join the 2019 John Newbery Medal Selection Committee.

For a librarian and voracious reader, it was the opportunity of a lifetime during a time when she was also about to begin her dream job as a university librarian.

“Getting the Newbery Committee appointment seemed like an auspicious start,” said Nataraj, who is the CSUSM librarian for American Indian Studies, Anthropology, Environmental Studies, Ethnic Studies, Global Studies and Political Science. “I celebrated by doing a little dance in my office and eating some chocolate. As one does.”

Following her well-deserved solo celebration, Nataraj went to work. Her official duties on the committee didn’t begin until early 2018, so she poured her professional efforts into learning all she could about CSUSM and its burgeoning library network.

The 2018 ALA Midwinter Conference in Denver was the first of three such meetings over the course of about a year where Nataraj dialogued with her fellow committee members to begin the arduous task of choosing the 2019 winners.

“It was a chance to get comfortable with each other because we knew in a year’s time that discussions in our group would be impassioned, and maybe at times fraught with emotion, so we wanted to tread carefully,” she said of that first conference.

The Newbery Medal, named after 18th century British bookseller John Newbery, is granted to the author who contributes in a distinguished manner to American literature for children. The recently announced 2019 winner was Meg Medina, who wrote “Merci Suarez Changes Gears” while “The Night Diary” (Veera Hiranandani) and “The Book of Boy” (Catherine Gilbert Murdock) earned Honor Books status.

Medina’s and Hiranandani’s titles were of particular pride to Nataraj.

“Two of the three books feature #ownvoices narratives and are written by two women of color,” she said. “‘The Night Diary,’ in particular, tells the little-known-in-America story of the 1947 partition of India. As an Indian-American, this story is very personal to me and to see it receive such widespread, mainstream recognition feels validating to the 9-year-old reader inside of me who longed to see herself represented in books.”

Before the winners were decided, Nataraj and her fellow committee members each read hundreds of books (“I would get at least 2-4 boxes per week,” she said), emailing their suggestions to the committee chair. The members were not allowed to communicate with each other outside of official face-to-face committee meetings at the conferences.

Needless to say, there was a large sense of relief when the committee reconvened in January in New Orleans to put the finishing touches on their recommendations.

“It was exhilarating to reunite with my committee in January 2019,” said Nataraj , who spent over a decade as a youth services public librarian before coming to CSUSM. “Most of the time, it felt like our reading was conducted in a silo. To sit in a room with 13 of your colleagues and passionately discuss books is transformative and rewarding. And it was surprisingly collegial—no one lost an eye!”

Instead of taking fancy family vacations, Nataraj and her sister spent countless summer days of their youth at the local public library. Nataraj developed a particular love for the writings of Ruth Manning Sanders, Paula Danziger and Judy Blume. When her mom began working at K-Mart, she would bring home “Sweet Valley High” or “The Baby-Sitters Club” paperbacks every week.

Nataraj’s duties on the committee don’t officially end until June 30. So for nearly two years, she has ridden the wave of a life-changing landmark. It’s difficult to downplay the excitement of having an experience beyond your wildest professional dreams.

“Serving on the Newbery has been a career milestone,” she said. “Growing up, I equally cherished and was intimidated by the timeless gold- and silver-sealed books. But to be one of the people responsible for affixing the hallowed Newbery seals? There are no words to describe it.”