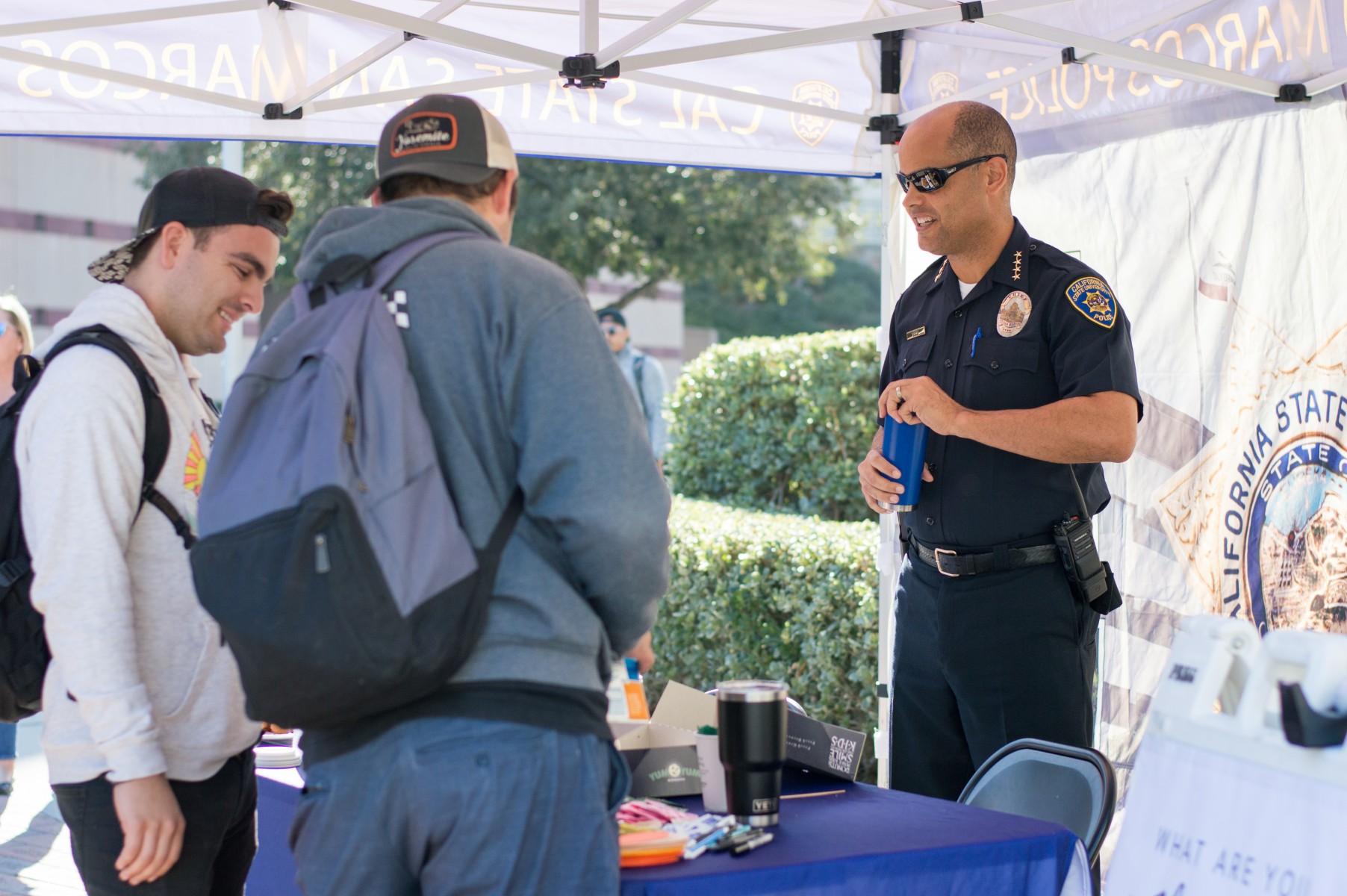 Police chief Lamine Secka, who was named to the post permanently effective Jan. 1, talks to students as part of the Coffee with a Cop program. Photo by Angelica Pena

Back in 1996, Lamine Secka left his job with the San Diego Police Department to work as a police officer at UC San Diego, the university he had graduated from the year before.

Almost 25 years later, college campuses remain his home away from home, and Cal State San Marcos is the latest to benefit from his steady hand at balancing the academic mission with the need for safety and security.

Secka recently passed the six-month mark as CSUSM’s interim chief of police and, as recognition for his performance in the position, had “interim” removed from his title as of Jan. 1, making his status permanent. He shifted to North County after spending 14 years at San Diego State, the last three of them as director of emergency services following a stint as that school’s police chief. He also served at UC Irvine in the early 2000s.

For Secka, a university setting is where he feels most comfortable and fulfilled.

“A lot of people might think, ‘Oh, it’s got to be a nice cush job working on a college campus,’ ” Secka said. “But I think it’s more challenging than working in a city because there’s a lot more gray area in a college environment. In the city, you either do something illegal or you don’t, you either go to jail or you don’t.

“Whereas on a college campus, there are more educational opportunities when it comes to students and community members. They don’t necessarily have to go to jail or get a ticket or anything like that. It’s rewarding to engage with students and provide them the support to get through college.”

Education is inextricably linked to everything Secka does professionally. In addition to his role at CSUSM, he’s one of four chiefs of the San Diego education sector for InfraGard, a national nonprofit organization that is the FBI’s public-private partnership focused specifically on infrastructure protection. In that capacity, he works with local schools and universities to make them aware of threats they face – from terrorism to cybercrime – and the resources that are available to combat them.

During the fall, InfraGard honored Secka in Chicago as its national sector chief of the year out of the 79 chapters across the country.

“Having worked with him since the inception of the education sector program in San Diego, I can say that the work that is being done in that space has been considered forward-thinking and innovative,” said Erin Fullerton, the director of Integrated Risk Management at CSUSM and one of the other three education sector chiefs for InfraGard in San Diego.

“Lamine’s leadership and vision has helped us to create the gold standard for InfraGard sector leadership and programs nationwide, and both FBI personnel and civilian leadership in chapters across the country are modeling their sector programs after the San Diego education sector model that Lamine helped develop.”

Secka may no longer work in SDSU’s police department, but he’s still an adjunct faculty member in the graduate program in homeland security, where he teaches seminars in both homeland security and emergency preparedness and response. It’s the same program from which he earned a master’s degree in 2014 while he was the university’s police chief. 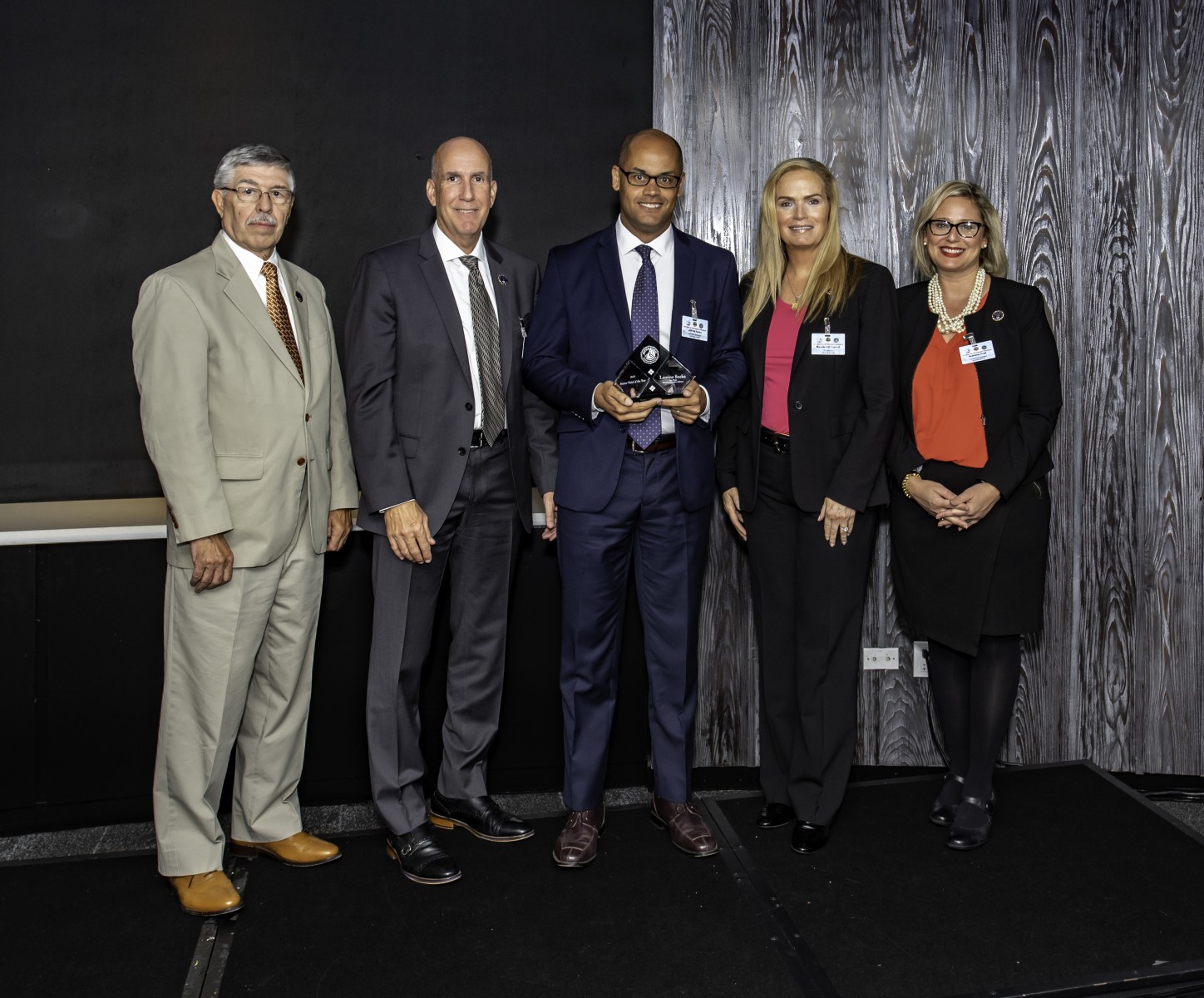 “When I was going through the program as a student, there were a couple of occasions when I was literally sending out emergency alerts while I was sitting in class because of something that had happened on campus,” Secka said. “When you go back to school with that real-world experience, it’s easier to make connections to the material that you’re reading and discussing. It’s not all theoretical.”

Among the students in Secka’s emergency preparedness and response class last spring was Sara Quinn, the director of CSUSM’s University Student Union, who took it as an elective as part of her Master of Public Administration program.

“Lamine taught just as much based on his own personal experience as he did from theory. Being able to take what he taught in class and bring it back to CSUSM was super important to me,” Quinn said. “Lamine was a very effective instructor. He never lectured at us – it was always an interactive discussion that encouraged us to explore various ways to respond to an emergency.”

Secka’s passion for teaching as a corollary to his jobs with university police departments dates back to his years at UCSD in the late 1990s, when he was an instructor for a bike patrol class for police officers from around the nation. About 15 years ago, he developed a course that prepares law enforcement personnel for the interview portion of the policy academy selection process.

“It’s just rewarding to pass on your knowledge to somebody else and have it stick and have them apply it in a way that works for them,” he said.

Upon his hiring on what was intended to be a temporary basis in June, Secka was charged with rebuilding CSUSM’s police department. From within the UPD, he hired a new lieutenant and three new sergeants, and he’s in the process of expanding the force from 19 officers to 22. He also has been working with Sharon Hamill, a psychology professor and the chair of Academic Senate, on various issues related to campus safety and ensuring that any policies adhere to the university’s commitments to inclusive excellence and diversity.

“We want to make sure that everybody understands why we’re here and what we’re doing and why we do the things we do,” Secka said. “Not just we the police department, but we the campus. We want people to feel confident in the campus’ ability to respond to things.”

Besides boosting transparency, one of Secka’s priorities as he settles into his permanent position is striving to portray himself and his staff as not just police officers, but core members of the campus community. He’s aiming to broaden the Policing and Community Engagement (PACE) program, instituted in 2015, to include a PACE-trained officer on every squad. He wants to increase the number of Coffee with a Cop events to one per month, and bring to CSUSM a program he instituted at SDSU in which students, faculty and staff can run or walk on the campus track with Secka and some of his fellow officers.

Running, and fitness in general, is no idle pursuit for Secka. He estimates that he has completed more than a dozen half-marathons and almost 50 triathlons. He has won gold medals in the triathlon at the annual United States Police & Fire Championships, and this year will mark his 14th competing in the Baker to Vegas Challenge Cup Relay, a 120-mile race divided into 20 legs in which Secka teams up with police personnel from throughout the CSU system.

“One year it was 123 degrees during my leg,” he said. “But when you go up over the mountains, sometimes it snows. One year the race was stopped because of snow. People think we’re crazy to do it, but it’s a lot of fun.”

Whether it’s running across the Mojave Desert or working to ensure the safety of the CSUSM campus community, there’s no standing still for Secka.