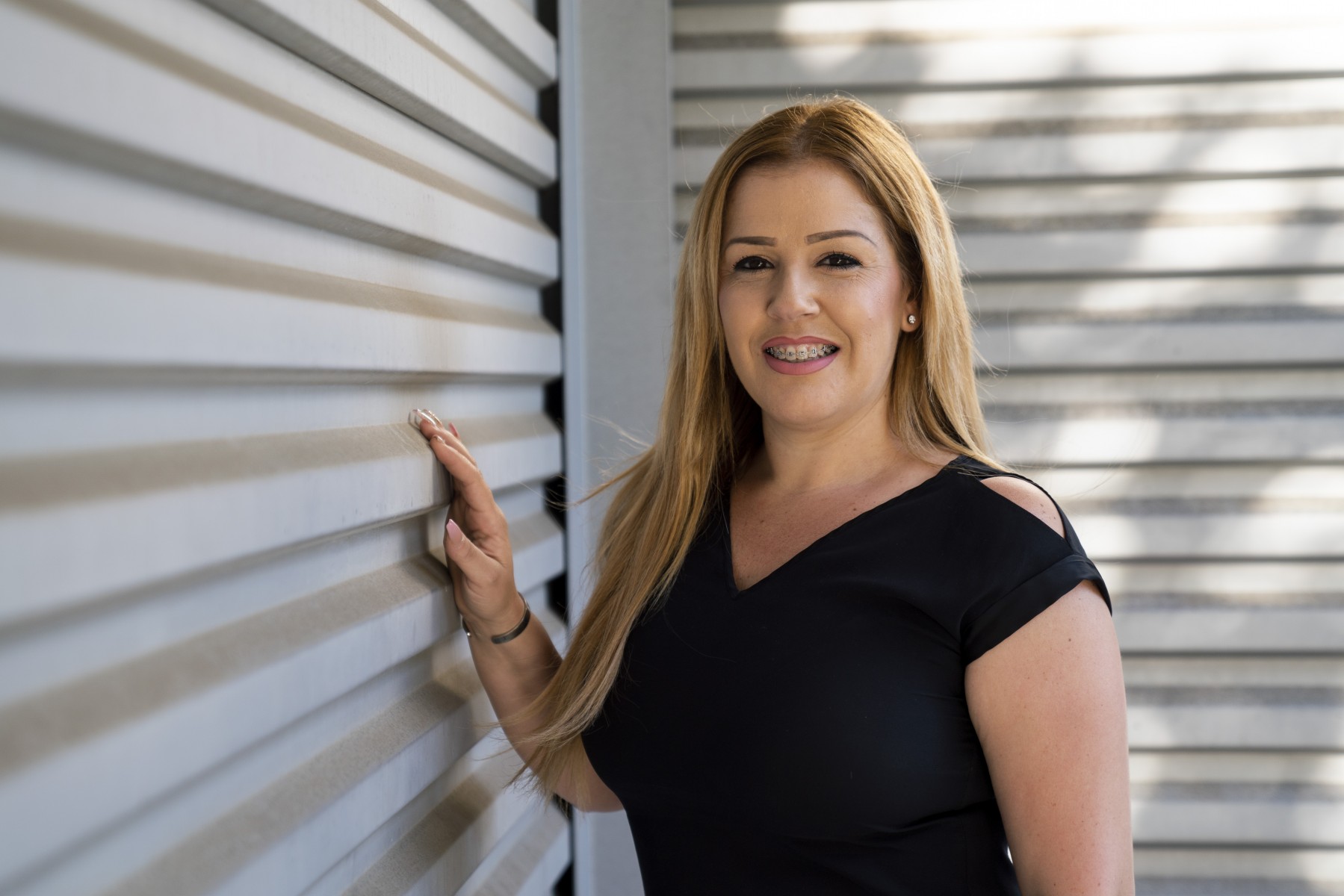 Maria Valdivia has overcome drug addiction and incarceration to earn her bachelor's at CSUSM. Now she is enrolled in the university's MBA program. Photo by Chandler Oriente

Maria Valdivia signed up for a drug treatment program with the goal of getting time shaved off her jail sentence. She wasn’t focused on actually kicking her drug habit, at least not at the beginning.

But entering that program became a turning point.

“Until you’re really ready to change your life, accept your mistakes and deal with the consequences,” Maria said, “no one’s going to make you change. No parole, no sentence, no nothing.”

It was in the treatment program that Maria realized she was truly ready to change, and she has been pushing forward ever since.

Maria celebrated six years of being clean in March. She mended relationships with her four children. She got her associate degree at Palomar College. She earned her bachelor’s in business administration at Cal State San Marcos last December, becoming the first in her family to earn a four-year degree.

“I can’t change the past,” she said, “but I can keep working on the future.”

Maria is doing just that. Surprising even herself, she started CSUSM’s Master of Business Administration program over the summer – thanks to a nudge from Martín Leyva, coordinator of the university’s new Project Rebound program, and Xuan Santos, an associate professor of sociology.

“She’s going to really empower other students who want to do exactly what she’s doing,” Santos said.

It is a far cry from where Maria was 15 years ago when she was serving time in an Arkansas prison. While Maria, 39, can look back now and see the pattern she had fallen into as a teenager, it wasn’t so easy to recognize then.

Maria gave birth to her first child when she was 14. She had two more children in the ensuing two years and her fourth when she was 21. She used drugs off and on through much of her teen years, but her drug abuse – “my drug of choice was crystal meth,” she says – grew in her early 20s.

“In my drug addiction, I made a lot of bad choices,” she said.

The most significant of those bad choices was agreeing to transport drugs from San Diego to Mississippi in 2005. Maria was pulled over while driving through Arkansas and ended up serving two years in prison there. She returned to San Diego after her release, but her drug problems persisted. She was arrested again in 2012 and served 15 months. This time, she joined a drug treatment program. While she initially did it to have her sentence reduced, she soon realized she was ready to get clean and end the downward spiral.

Upon her release, she was extradited to Arkansas to finish her sentence there (her San Diego arrest violated the terms of her probation in Arkansas), but she remained on the right path. She returned to San Diego in 2014 and was placed in a residential treatment program in Escondido. Maria’s sponsor in the program provided candid insight that was critical in Maria’s ongoing recovery.

“She didn’t sugarcoat anything,” Maria said. “When I would call her crying because my daughter didn’t want to see me, she was like, ‘Yeah, that’s your fault. You haven’t been there for her.’ Just having that reality check helped me see how my decisions had affected my children. I didn’t want to do that or be that to them anymore.” 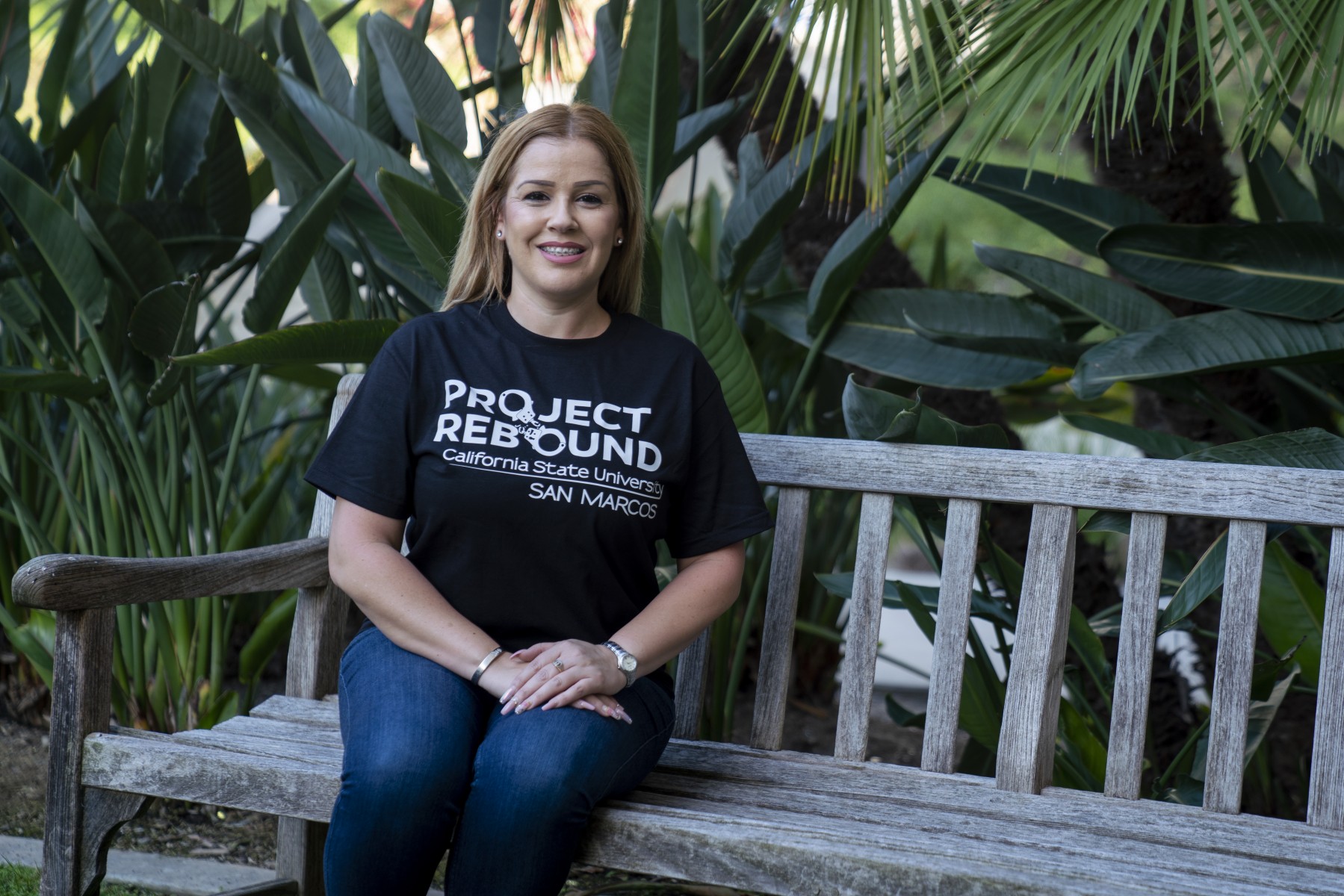 Maria Valdivia is a member of the first cohort of CSUSM's Project Rebound, a program that provides support for formerly incarcerated students. Photo by Chandler Oriente

Maria was initially upset about being placed in a program in Escondido, some 40 miles away from her children in southern San Diego. She wanted to rebuild those relationships and couldn’t understand why the court would place her so far away from her kids. In hindsight, she realizes it was for own benefit. It allowed her to focus on her recovery and building a strong foundation to be a mom again to her children.

Maria’s sponsor also encouraged her to pursue her associate degree. Maria had taken some classes after high school, but the thought of returning to college in her mid-30s was daunting. She figured her arrest record would prevent her from getting a job where she could use her education, so why bother?

“But at that time, I had nothing to lose,” she said. “Little by little, I just started getting my life together.”

Maria met Leyva toward the end of her first year at CSUSM. She was surprised to learn that she wasn’t alone in being a formerly incarcerated student on campus. Leyva guided Maria through the process of having her record expunged, which helped her get hired at a local insurance company, where she is now training to be a supervisor. She will earn her MBA in December 2020 and has talked with Leyva about opening a transitional home to help formerly incarcerated people with their re-entry into society.

But, most importantly, she is happy to be back with her family. Her oldest daughter graduated from San Diego State last spring, and her youngest son started classes at Southwestern College this fall. Her two middle children have contended with struggles similar to those that plagued Maria – both have battled drug addiction, and her middle son is incarcerated – but both have been inspired by the changes they have seen in their mother.

“Seeing what habits of mine they were picking up and seeing how they were following in my footsteps was so hard,” Maria said. “But now I’m a different example. And that just feels good.”