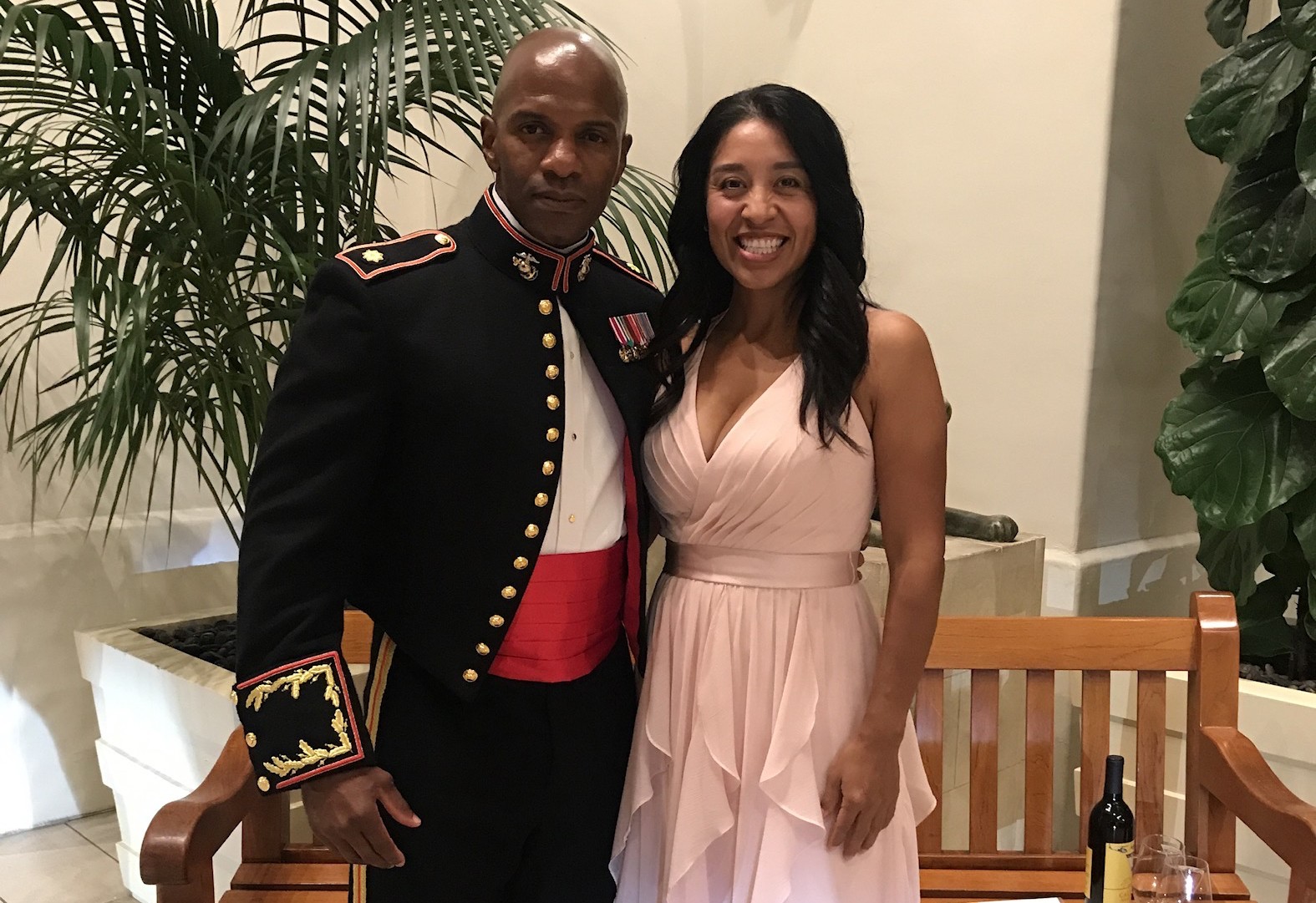 Eddie Utuk, with wife Janette, graduated from CSUSM with a bachelor's in chemistry.

For 23 years, Eddie G. Utuk has proudly and faithfully served his country as a member of the United States Marine Corps.

He has defended his country in Iraq and Afghanistan in support of Operation Iraqi Freedom and Operation Enduring Freedom, respectively.

He has designed war plans, has a master’s degree from the Naval War College in Newport, R.I., and, as an officer, now teaches command and staff.

And it all started with white-board sessions as a chemistry major at Cal State San Marcos.

Utuk, the current program director and deputy regional director at the Marine Corps University at Camp Pendleton, makes it clear he owes much of his career success as a military officer to the time he spent at CSUSM, specifically in Jackie Trischman’s class and lab.

“I remember the white-board sessions with Jackie,” Utuk said. “She was able to provide students almost like a playground whereby you were building relationships with your peers while you were learning. I remember many times during those white-board sessions where she would just come down and watch us. She might say something inspirational to make you want to go back and research a little bit deeper. She taught us that you can memorize these things and pass the exam, but if you are not able to have the critical thinking and apply your God-given talent to have an in-depth knowledge of what you’re being taught, then you cannot apply it and advance those principles where it matters the most in the real world.

“Those white-board sessions – I wish I could write a book about it. Everything that I’ve done planning war plans or doing anything like that, I always start with a white board.”

Utuk enlisted in the Marine Corps in 1997 and began attending CSUSM as an enlisted member shortly after. His time as a chemistry major didn’t come easy. The subject matter didn’t come naturally to him, and before graduating in 2002, he struggled with some of the same challenges all undergraduate students face.

That’s when Trischman came into his life. A chance meeting turned into an opportunity as a lab tech.

“I remember how kind Jackie was,” Utuk said. “She is a beautiful angel in that her heart is just so big. There’s no way I could afford the textbooks so I had to work additional to complement some of the financial hardships of living in Southern California as a single young man. She was kind enough to offer me a job as a lab technician, which I really cherished.”

The job opportunity was not only critical to Utuk’s development, it provided an opportunity for the Marine to learn something about how much he could truly accomplish.

“It was hard work, don’t get me wrong,” said Utuk, whose master’s degree is in National Security Strategy and Military Science. “Obviously working as a lab tech, supporting her when she was doing her research, it was a lot but it was high payoff. It taught me hard work, it taught me the value of relationships, and lastly, it gave me something that I take with me to the grave, which is my education. I always told myself if I can survive Jackie, if I can survive her class in chemistry, I can do anything in life. She’s a lifetime mentor of mine.”

The respect and gratitude goes both ways.

Trischman, a professor of chemistry and biochemistry, attended Utuk’s graduation ceremony aboard the USS Midway in 2002 as Utuk was an active-duty Marine.

“He is a fantastic guy; very diligent and respectful,” said Trischman, who is the interim dean of the College of Science, Technology, Engineering and Mathematics. “Eddie was so enthusiastic remembering the lab and his classmates, and I loved finding out a small piece of his success story.

“He is the living embodiment of a quote I have on a sticky note on my computer screen: ‘Let your faith be bigger than your fear!’ ”

Utuk took the assignment at Camp Pendleton so he could, in his words, stabilize his family. By 2023, he figures to retire from military service.

Utuk comes from a military family. His father was a colonel in the Nigerian Army who came to the U.S. to attend Airborne Infantry School at Fort Benning in Georgia as an exchange student.

Eddie was born in Fort Benning and grew up in Columbus, Ga., but was essentially a military brat, living all around the world once his father’s time was done there. One of his father’s classmates is the current president of Nigeria, Muhammadu Buhari.

“Being a military brat, you just learn the prestige of being able to serve your country,” said Eddie, whose father died in 2009. “I come from a position of gratitude. I truly appreciate the opportunity to serve as a Marine. Now I mentor, coach and train many, many young people to be my future replacements. I’m just so grateful to be given the opportunity by people who invested so much of their time in me, including my dad, to teach me and show me the right way to be a human being.”

His path has found an ideal landing spot in North County.

Utuk would like to return to school to obtain a doctorate. He and Janette have plans to expand their family some day in the near future. He wants to continue to teach and mentor, and do all of the above in the region.

No matter where life takes him, Utuk is grounded, respectful and thankful above all else.

And wherever he goes, he’ll be sure to bring his white board.

“Three things for me matter the most,” Utuk said. “The very first thing is character. I truly believe character is something that is baked into you. It’s what gives you a conscience to do the right thing when no one is looking. The second thing is compassion. Compassion is why we serve. Love for all the people. Putting other people first and being selfless in that manner. And the last thing is passion. If you say you’re going to do something, by God, you have to do it.

“You have to make sure your words match your actions as a human being. If I can pass those to my daughter, I believe the sky is the limit in terms of what she can accomplish in life.”