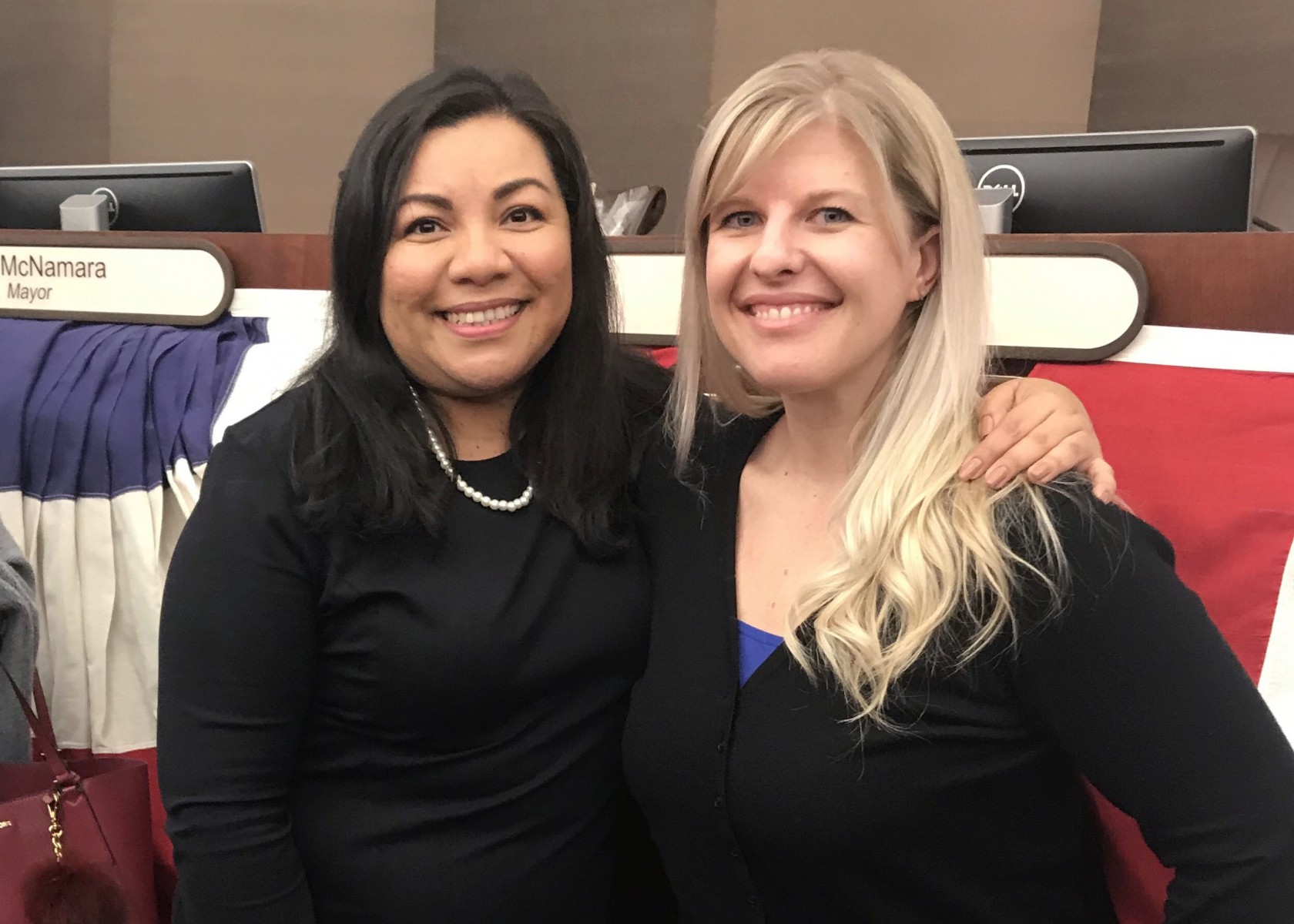 Consuelo Martinez and Lindsay Riedel
More than 10 years after they met at Cal State San Marcos, Martinez (left) won a recent election for Escondido City Council, and Riedel was her campaign manager.

It was in the fall of 2007 that Lindsay Riedel met a fellow Cal State San Marcos student who made an immediate, lasting impression.

Consuelo Martinez was in her first semester after transferring from Palomar College, and the two women soon discovered that they had more in common than their major (women’s studies). Both hailed from Escondido, and both had a desire to see the city’s prospects improve.

Where they differed was in how they felt about their hometown and their belief that real change was possible.

“I did not see myself as someone who would ever associate Escondido as my hometown,” Riedel said. “I wasn’t proud of it. I didn’t feel particularly strong about being from there or going back there.

“When I met Consuelo and saw her diehard love of and commitment to Escondido and seeing it thrive, I was inspired. She had all these great ideas about how to make it happen and bringing businesses to the city. There are certain people who you gravitate toward, and she was one of them.”

Neither could have known at the time that, more than a decade later, Martinez would be in prime position to better Escondido personally, and that Riedel would have played a vital role in helping her get there.

On Wednesday, Dec. 19, Martinez participated in her first meeting as Escondido’s city council representative from District 1, a week after she was sworn in and about six weeks after she defeated longtime incumbent Ed Gallo by securing almost two-thirds of the vote. Martinez herself would admit that she couldn’t have pulled it off without the support of Riedel, who served as her campaign manager.

“I’m the big-picture thinker, and she’s about micro-level project managing,” said Martinez, 40. “We complement each other. I’ll tell her my big ideas, and she’s like, ‘OK, but how are we going to do that?’ She brings me down to reality, and together we make it happen.”

That they made it happen was all the more satisfying after the disappointment of 2014. Four years ago, Martinez was a community organizer for the American Civil Liberties Union who decided to quit her job to run for city council for the first time. Riedel was living in Washington, D.C., after having earned a master’s degree in public policy at George Washington University.

As a political novice, Martinez knew she needed someone she could trust to manage her campaign, so she reached out to Riedel, whom she had stayed in periodic touch with since their days at CSUSM (Riedel graduated in 2008, Martinez in 2010). Riedel agreed to move back west to assist Martinez, and both were crushed when Martinez lost to Gallo by only 69 votes. 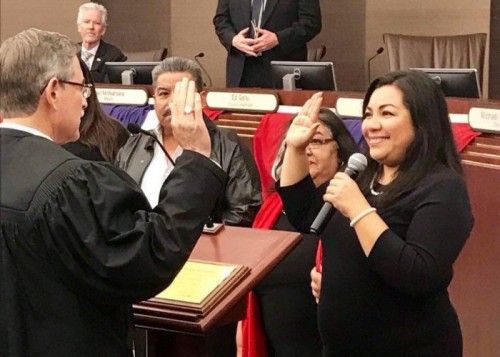 This time around, the circumstances had changed. Martinez was now working for Mid-City Community Advocacy Network, a nonprofit in City Heights. Riedel had moved out of Escondido, gotten married, and was working for San Diego County as a communications specialist in the Chronic Disease and Health Equity Unit.

With both holding down full-time jobs, they realized they would have to campaign smarter, not necessarily harder. But they also sensed that the political winds had shifted in their favor.

“The loss in 2014 was really painful, and I didn’t think I would do it again,” Riedel said. “But when she asked me last summer, I thought, ‘We need this, we need her. Escondido will never get better unless we have different leadership, different people with smart, innovative ideas, and you can’t get that with the same council members in office for so long.’ ”

While Riedel devised strategy behind the scenes, Martinez canvassed for votes block by block. It helped, of course, that she’s intimately familiar with District 1, the urban heart of the city, having grown up there and living there now.

On one of her many tours of District 1 neighborhoods, Martinez met a man who had tried for years to force the city to address the problem of tree roots near the public sidewalk causing damage to his driveway. She simply reported the issue to the relevant city department using an app on her phone, and the driveway was soon fixed.

“Sometimes it’s very easy, but there wasn’t anyone out there meeting with the public,” Martinez said. “That’s a small win, and this guy gets his driveway fixed after waiting so many years. That means a lot to me, and I hope to continue to do those things on the council.

“Some people who moved away from Escondido have told me that they want to move back. That’s really exciting.”

Martinez says her priorities for her four-year term on the council mainly concern “basic infrastructure.” She wants the city to return to sweeping the streets on a regular basis. She wants to build a skatepark in Washington Park.

“For me, it’s really important to stay at the hyperlocal neighborhood level – meet with the constituents, see what are the most immediate needs in their neighborhood, and address those needs,” Martinez said.

As she prepares to go to bat for her fellow Escondido residents, Martinez can’t help but reflect on the road that brought her to her present station. In a way, she didn’t choose politics. Politics chose her. She originally aspired to attend law school and become a public interest attorney, but her work as an ACLU activist in Escondido put her in close contact with the people she now represents.

They implored her to run for office back in 2014, and she somewhat reluctantly agreed. Only in hindsight does Martinez see her decision as responding to a “sign from the universe.”

“Eventually there’s a calling where you need to be somewhere and maybe it wasn’t in your plans, but if you answer that call, it’s amazing,” she said. “Now my voters tell me, ‘Consuelo, you were meant for this, you’re going to be mayor someday.’ This is a long time coming. This is stuff that I’ve been doing that I never knew was preparing me for this.

“I truly believe – even if it’s uncomfortable, even if you don’t feel ready – if there’s an opportunity and people ask you to serve, totally do it. Running for office was very scary and very uncomfortable. I had no idea what I was going to do or what was going to happen. But if I’m working so hard to improve my city and I’m not seeing that change from the outside, then it’s time for me to take a role on the inside.”