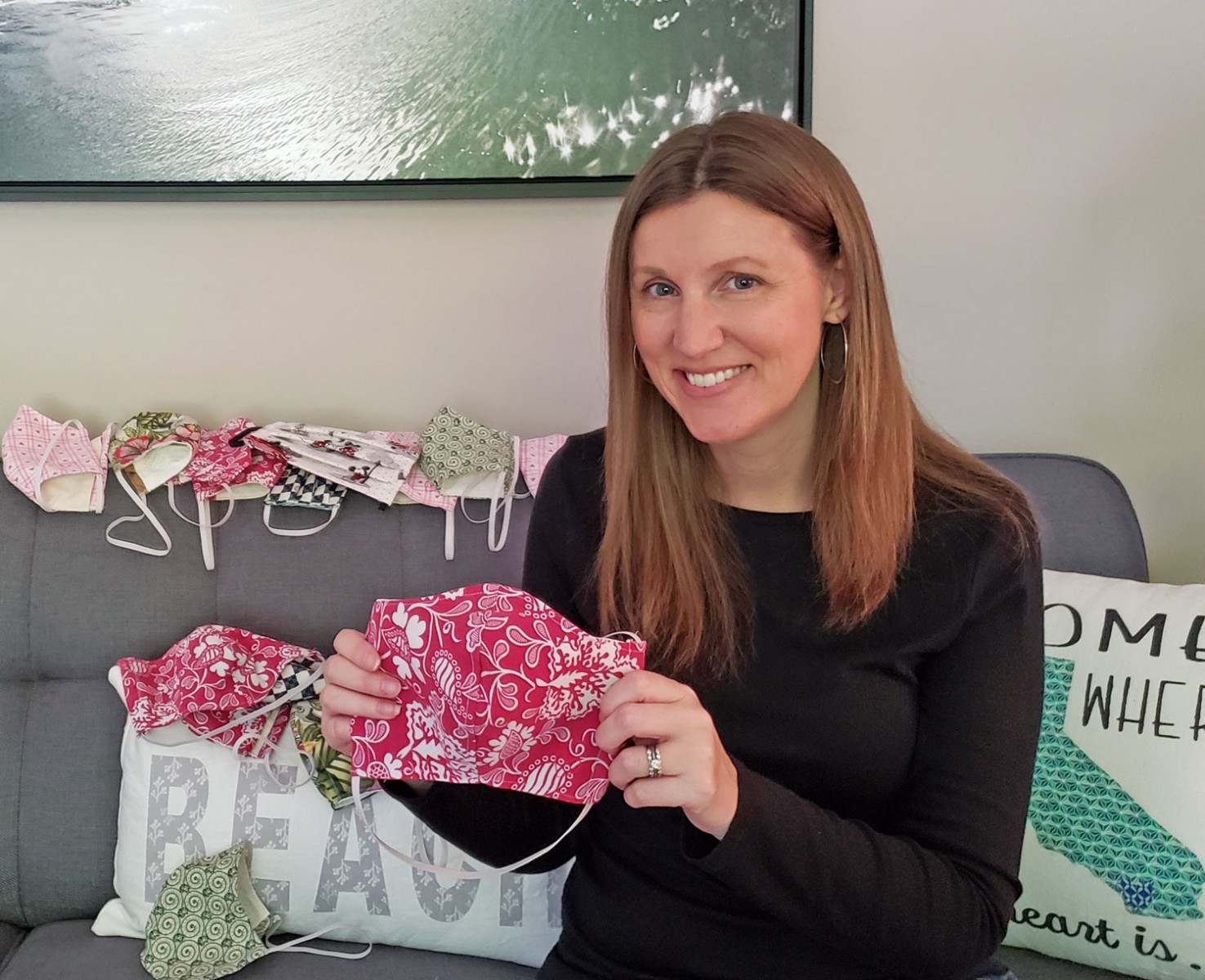 Michelle Harvey, a 2002 graduate of Cal State San Marcos, started a Facebook group that now boasts almost 1,200 members and collectively has produced thousands of face masks that it has donated to local health care workers..

Michelle Harvey is the first to admit that she’s far from an expert seamstress. The family sewing machine is one that she gave to her 10-year-old son, Mason, as a gift just last Christmas, and the two of them learned how to sew by watching YouTube videos.

Harvey, though, was seeking to help however she could as the coronavirus pandemic continued its march through San Diego County. So when a friend who’s a nurse at Tri-City Medical Center reached out in late March to tell her that the hospital was now accepting donations of do-it-yourself fabric face masks, Harvey quickly answered the call, sewing three masks for her friend. After expressing gratitude, the friend said she and her colleagues could use as many masks as Harvey could produce.

“I was like, ‘I’ll see what I can do. I can make a few masks and tell a few people about it,’ ” said Harvey, a Vista resident who graduated from Cal State San Marcos in 2002 with a degree in business administration.

Harvey posted the request on the social networking service Nextdoor, where it soon attracted hundreds of replies from community members who wanted to contribute to the cause. When that platform became too unwieldy, Harvey created a Facebook page called the San Diego Face Mask Sewing Group.

She had no idea what she had just unleashed. Three weeks later, the group has almost 1,200 members who collectively have churned out thousands of masks (so many from so many people, in fact, that Harvey is having trouble keeping track).

“It’s kind of crazy that I’m in this position,” Harvey said with a laugh. “I never, ever thought I would be sewing like this. At first, I felt so unqualified, but I’ve learned so much about the masks, about the process. We have a lot of people who know how to sew very well and some who are trying to hand sew masks. They’re like, ‘We don’t have a sewing machine; can we still help?’ And I say, ‘Absolutely, give it a try!’ ”

Harvey isn’t the only member of the CSUSM community who’s doing their part to ensure that doctors, nurses and others in the health care field have the protective equipment they need during this crisis.

Michelle Harvey produces masks with the help of her husband, Jason, also a CSUSM grad, and her son, Mason, 10.
Harvey and her family display some of the masks they've made from their Vista home.
The fabric face masks come in many different styles and color patterns.

Harvey started her Facebook group originally to meet the face mask needs of Tri-City Medical Center (and she’s proud to report that those needs, for about 1,700 masks, were met by the end of last week). But when word of the group’s existence got around, requests began pouring in, including from hospitals like Palomar Medical Center, Kaiser, Scripps Encinitas and Rady Children’s, as well as organizations such as Oceanside Unified School District and Carlsbad Police Department. Harvey even filled an order for a Navy ship that has been transformed into a hospital during the pandemic.

“As they come in, we add them to our lists and see if we can grant the wishes that are on those lists,” Harvey said. “We have people who will pick up masks from houses because social distancing is very important. We try to keep people at home at all times and leave things on porches to be picked up.”

Harvey emphasized that the Facebook group is strictly about the donation of masks to hospitals and organizations that need them. She doesn’t accept monetary donations, and no one is allowed to sell masks on the site, either. The site contains plenty of sewing tutorials for people who want to help but don’t really know where to begin.

Harvey hasn’t been counting the number of masks she has cranked out, though she estimates it’s in the hundreds. She has been so busy that it wasn’t until last week that she finally got around to making masks for herself and her husband, Jason, who also graduated from CSUSM in 2002. She enlists Jason and Mason in the effort as well, with all of them taking turns sewing, ironing and cutting fabric, cutting elastic ties and other tasks.

“There’s a lot that goes into one little mask,” she said. “It’s like an assembly line.”

While she oversees a Facebook group with more than 1,000 members, Harvey also homeschools her son and runs not one but two businesses. She owns a real estate brokerage firm named Harvey Homes Real Estate and Property Management and started a company with Mason – Good Karma Candles makes and sells ethically sourced soy candles, with a portion of all proceeds being donated to the Ronald McDonald House.

So she’s busier than ever, yes, but also more inspired than ever.

“It is a very difficult time for so many, and in all of this, I feel like the Facebook group is a light in the darkness,” Harvey said. “The sense of community is incredible. I see kindness, generosity, hard work and exhaustion. Through it all, they persist and push through to help all who come to us. I have never seen anything like it, and I’m so proud to be part of it.” 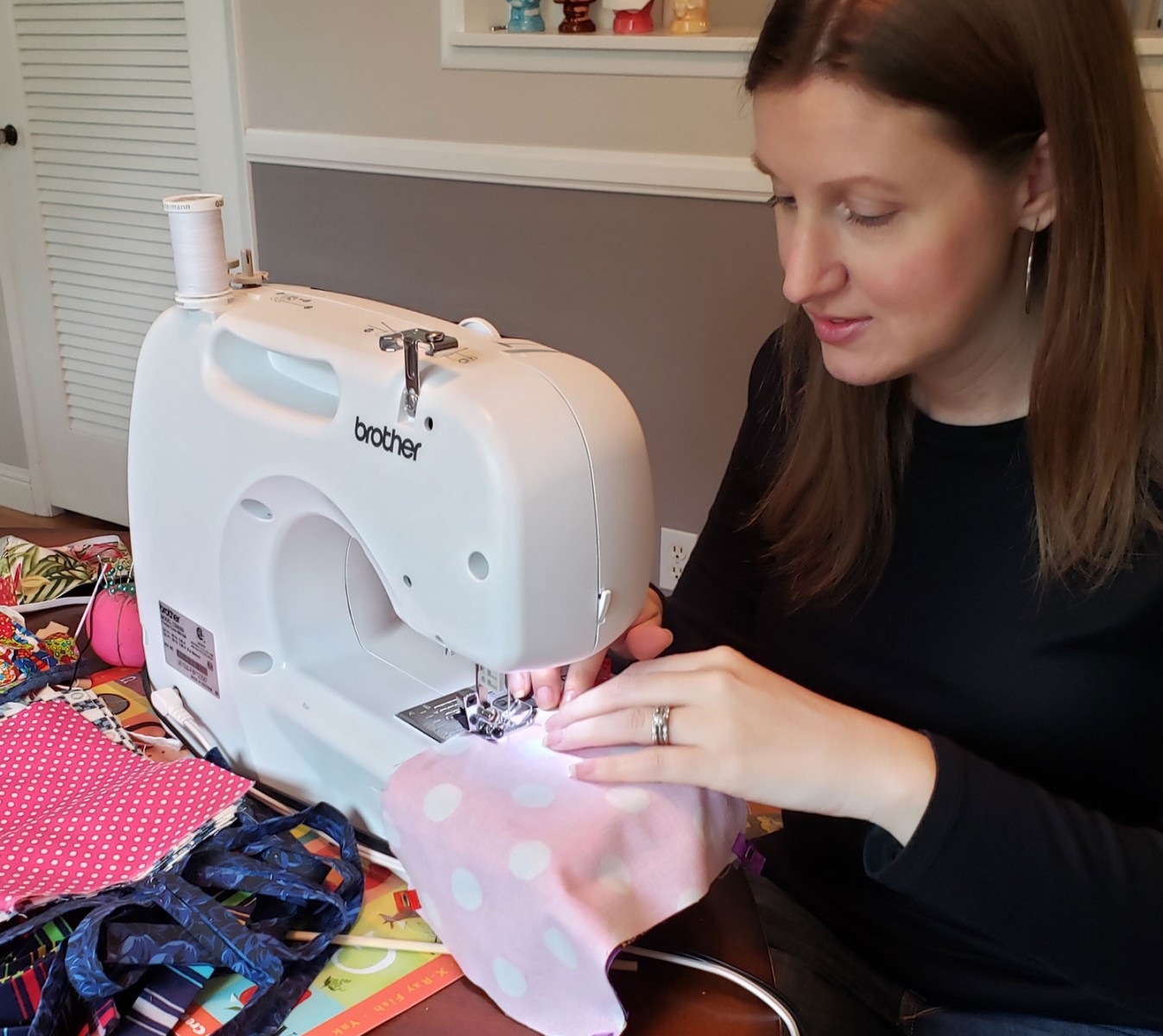 "I feel like the Facebook group is a light in the darkness,” Michelle Harvey says. “The sense of community is incredible."