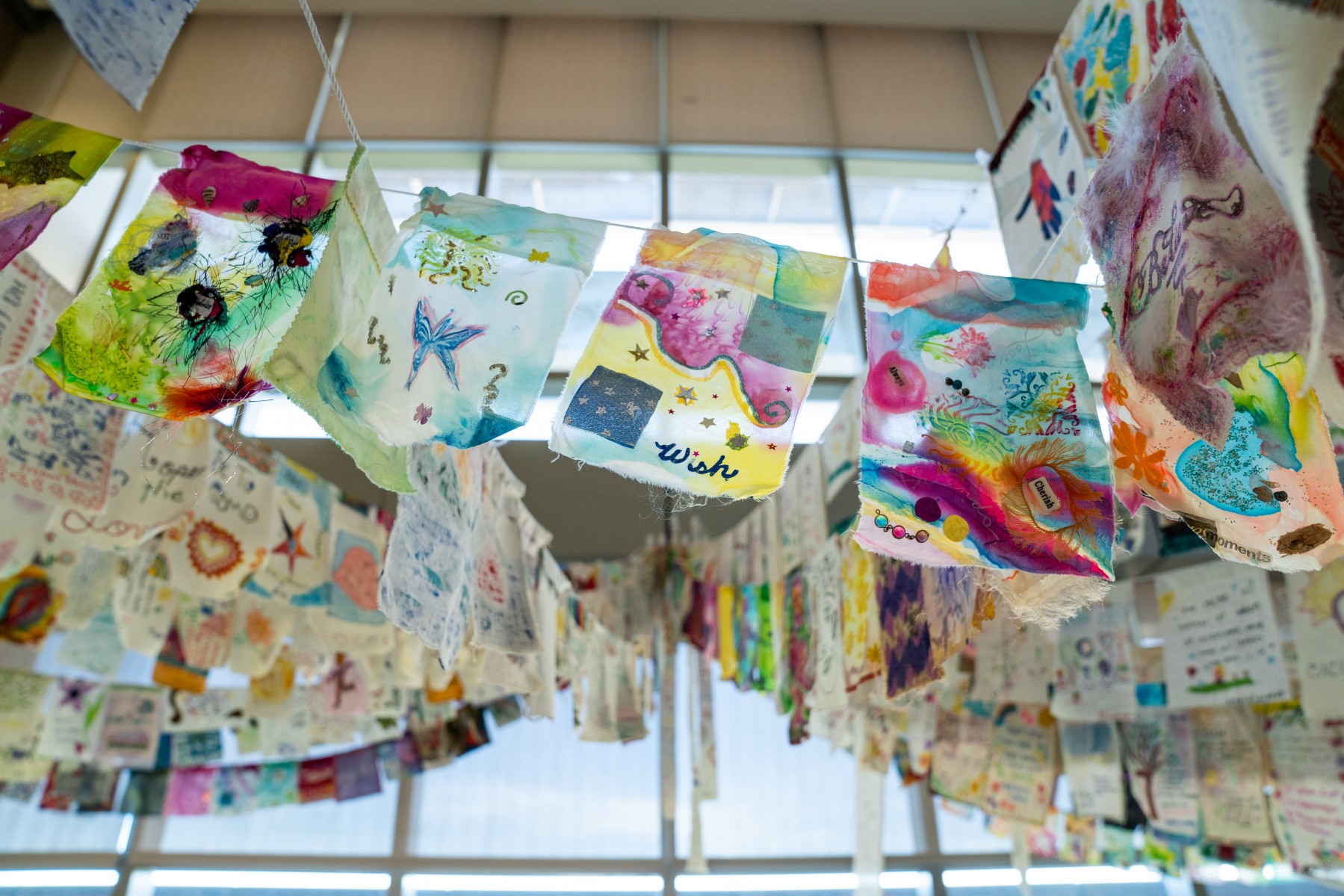 Hope Made Visible is a new art exhibit in the University Library consisting of close to 1,500 art flags made by cancer patients and their loved ones from around the world. Photo by Chandler Oriente

Alessandra Colfi is an expressive arts therapist who worked with patients at the San Diego Cancer Research Institute. She also is a practicing Buddhist fascinated with Eastern culture.

So, one day about eight years ago, Colfi stumbled upon the idea of borrowing the concept of the Tibetan prayer flag – a colorful rectangular cloth often found strung among trails and peaks high in the Himalayas – and incorporating it into her sessions with cancer patients.

After the initial eight-week series at the San Diego Cancer Research Institute proved to be a hit, Colfi brought her art flags program to other medical facilities where she works, including the Moores Cancer Center in La Jolla, and began sharing the idea far and wide – via social media, trainings for local social workers and nurses, and an international network of expressive arts therapists.

“Pretty soon, flags started coming back to us made by patients and families and friends from other countries,” Colfi said. “I kind of planted the seeds, and then it took off. It became its own traveling show.”

This semester, that traveling show is stopping at Cal State San Marcos. Hope Made Visible, an art exhibit that grew out of Colfi’s brainchild, is on display in the gallery on the third floor of the University Library through May. The exhibit takes the form of almost 1,500 flags created by cancer patients and their loved ones from all over the world, strung together and crisscrossing each other in a bright, colorful pastiche. There’s also a guest book for people to share their thoughts and experience with not just the exhibit but also friends and family who have fought cancer.

The opening reception for Hope Made Visible will take place on Feb. 13 from 6-8 p.m. in the reading room on the library’s fifth floor. Colfi will discuss the inspiration and artistic processes behind the flags, guide participants in the making of their own flags, and even lead a Zumba session. Seating is limited, and attendees are asked to RSVP.

The exhibit is presented by the University Library in collaboration with the CSU Shiley Institute for Palliative Care at CSUSM.

“This exhibit is really powerful,” said Toni Olivas, engagement and inclusion librarian at CSUSM. “Almost everyone on this planet, unfortunately, especially in the United States, has been affected by cancer one way or another. For me, my grandmother had cancer and my best friend had cancer. It’s a disease that eats away at us – literally it seems like – so having our students aware of not just the medical advances that we’ve had but also knowing what Dr. Colfi does, how healing the arts can be, is really important.” 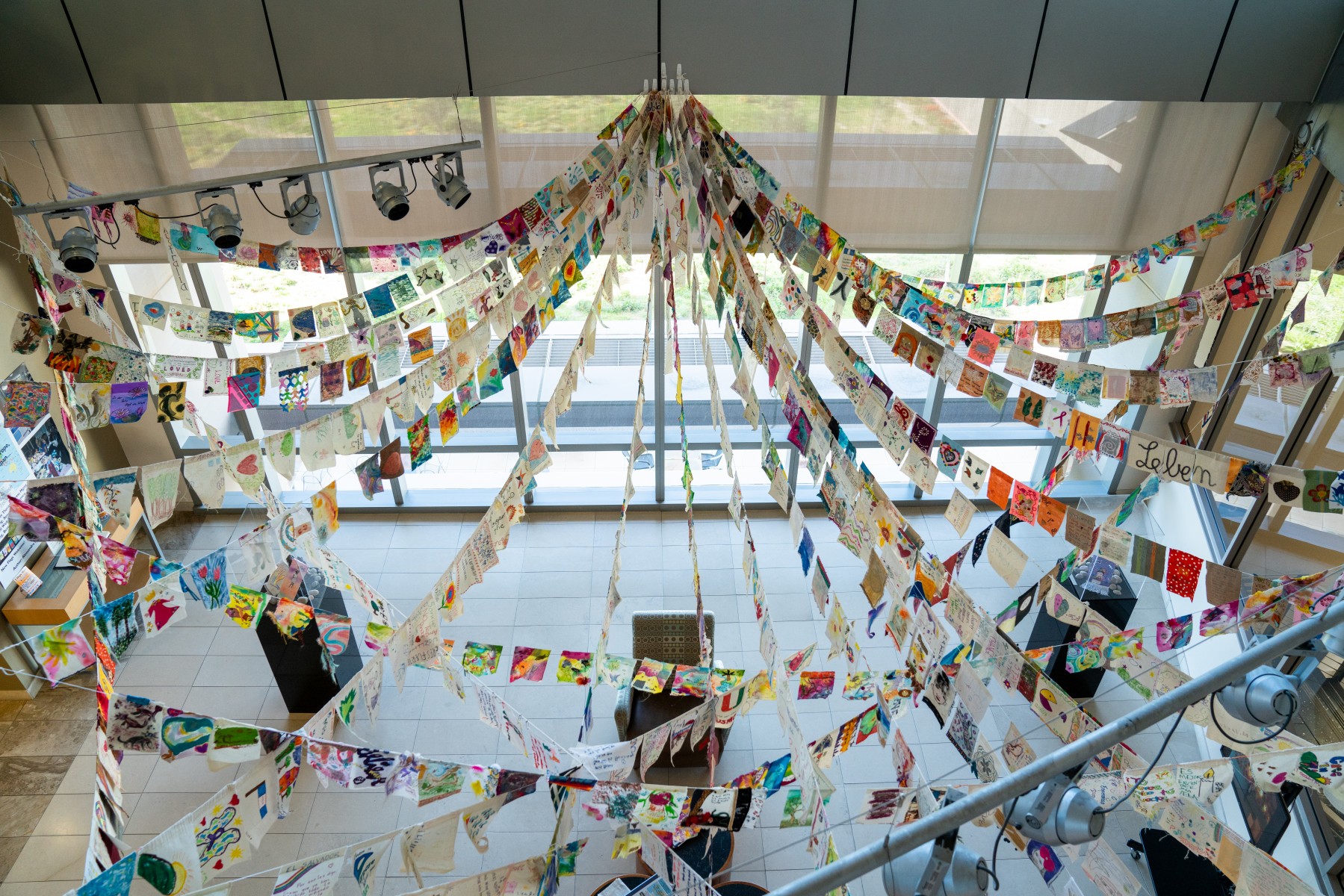 The exhibit was created by Dr. Alessandra Colfi, an expressive arts therapist, under the auspices of the San Diego Cancer Research Institute. Photo by Chandler Oriente

The healing power of art is evident in the organic way that Colfi’s original concept spread. At a drum circle on the beach one summer night, Colfi met a cancer survivor from Germany who was so inspired by the art flags that she imported Hope Made Visible to her country along with Austria, France and Switzerland. Flags now have been sent to Colfi from 13 nations, and the flag exhibit itself has traveled to Germany, France, El Salvador and Guatemala.

For the opening reception at CSUSM, an additional string will be arriving from the cancer center at Yale University, courtesy of a former volunteer worker under Colfi who’s now a student at Yale and gives her time to the cancer center, creating flags with patients.

“Every time we get a box of flags from somewhere, it’s like Christmas morning,” Colfi said. “It’s been an amazing adventure of people tuning in to this symbolic way of feeling connected and feeling that there are so many people dealing with this terrible and frightening disease.”

Hope Made Visible came to CSUSM through the suggestion of psychology professor Sharon Hamill, the former faculty director of the Institute for Palliative Care at CSUSM. Hamill met Colfi by way of her palliative care work, and the flags were displayed at the San Diego Palliative Care Conference hosted by the university two years ago.

“It was an inspiration to health care providers who attended the conference,” Hamill said. “The message of resiliency and hope in the face of severe health challenges is the very heart of palliative care.”

Olivas has reached out to various classes recommended by Hamill to propose a tour of and lecture about the exhibit for students, and the library also wants to tie Hope Made Visible in with the annual What Gives Your Life Meaning campaign on campus in April.

As for Colfi, she hopes that the exhibit at CSUSM will be more than a static thing that people observe.

“It is an opportunity for self-reflection, of course,” she said. “But I also want it to be something that has an opening to the future, and continue to invite people to contribute and to participate, to be engaged wherever they are, however they feel.”

Colfi (center) holds one of the strings of art flags along with University Library staff members.

Kristine Diekman is a professor of art, media and design at Cal State San Marcos, where she teaches media theory and production, and sound studies. She’s also a media artist working in documentary …
Read more

Noted author, musician and activist Simon Tam will be the featured speaker for an Arts and Lectures webinar titled “Slanted: How an Asian American Troublemaker Took on the Supreme Court.” The free …
Read more

In the fall of 2016, Cal State San Marcos student Jake Northington took a photography class for the first time as part of his pursuit of a degree in visual and performing arts.  For the final …
Read more
NewsCenter