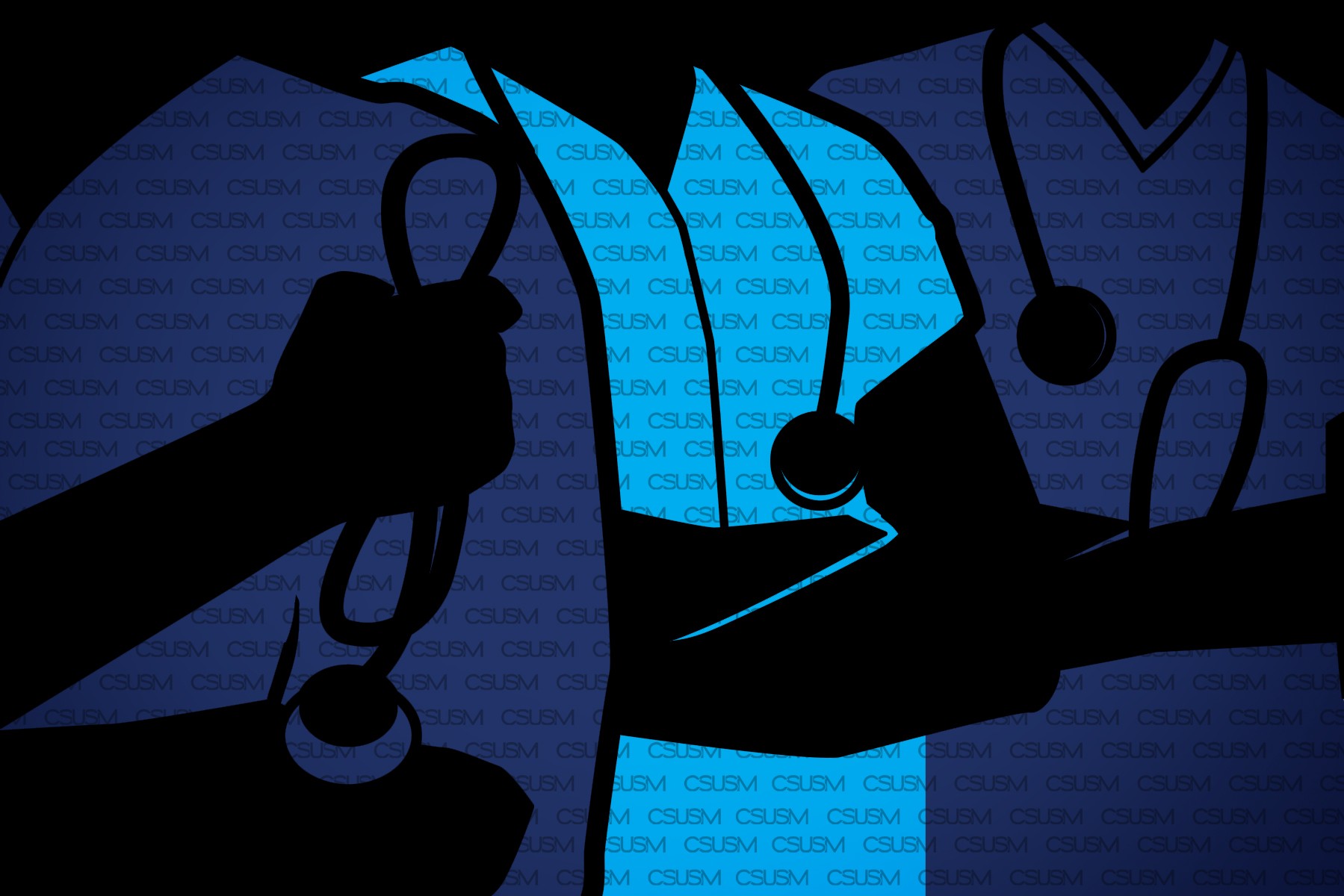 Many alumni of CSUSM's School of Nursing are engaged in the fight against COVID-19. Illustration by Marcus Torres

Three days a week, sometimes in the dead of night, Aaron Stirling reports for a 12-hour shift as a nurse practitioner in the emergency room of a small rural hospital in Imperial County.

More precisely, Stirling reports to an area outside the emergency room called the decontamination tent, a temporary (he hopes, at least) structure that the hospital has set up to deal with patients who show up with symptoms of COVID-19, the disease that now has infected a staggering 2.5 million people around the world. The numbers in this relatively isolated part of California remain manageable, but no one knows whether it will stay that way. The surge could still be coming.

“We’re definitely in the eye of the storm here,” said Stirling, who received his bachelor’s degree in nursing from Cal State San Marcos in 2012. “I think things are going to get a little worse before they get better.”

So despite ever-present feelings of stress and fear, Stirling goes to work, dons his personal protective equipment (PPE), and does what he can to keep people safe and well during this pandemic without precedent. The same is the case for hundreds of fellow alumni of CSUSM’s School of Nursing who are putting their training to heroic effect. This is the job that they signed up for, so this is the job that they’re doing – day in and day out, for however long COVID-19 ravages the nation.

Here are three stories of CSUSM nursing alumni who are, to varying degrees, engaged in the fight.

After graduating from CSUSM, Stirling worked as an inpatient nurse for a couple of years before earning a Doctorate of Nursing Practice from the University of San Diego in 2018. For the last two years, he has been stationed at the small hospital in Imperial County, which he describes as the “last stop before Arizona.” 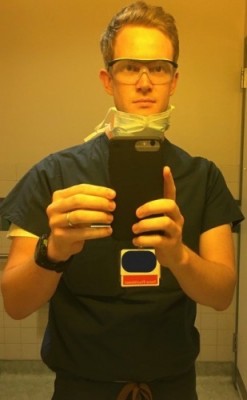 In the triage tent, Stirling is part of a team of nurse practitioners and physician’s assistants – they call themselves advanced practice providers, or APPs – who make up the first line of contact with patients arriving at the facility. He estimates that 80% of the patients he sees have COVID-19, though it’s impossible to really know because many of them are not being tested.

“All this planning is around anticipating the surge like you’re seeing in New York and Italy and all those places where the health system becomes inundated and overwhelmed with these patients,” Stirling said. “This is a first step for most patients who come in the ER, where if they present with any sort of flu-like symptoms, they’ll be funneled over to the decon area. Then we’ll assess them and, depending on the risk, they can be admitted to a special room. Otherwise, it’s safer for them to be treated symptomatically and sent home.

“So we’re that quick decision point where it’s like, ‘Do you need to be exposed to more things in the ER, or can you be treated and go home and self-isolate?’ ”

Unlike a lot of hospitals that have run out of PPE, forcing them to scramble and even turn to face mask donations from the community, the supply chain of his care center has held up, Stirling said. But rationing is a new reality. He’s using his protective N95 respirators for three days instead of the normal one, and the hospital is rationing its limited supply of ventilators as well. In every snap decision he makes, Stirling strives to minimize the exposure of himself, his colleagues and the vital equipment that helps keep patients alive.

The challenges don’t end when Stirling goes home. His wife is pregnant with their first child, a girl who’s due in the fall, which means that he must be extra vigilant about removing his scrubs before he enters the house, sanitizing his equipment, and being meticulous about self-care in general. And emotionally, he grappled with the development that a family member who also works in health care was diagnosed with COVID-19 (the family remember has since recovered and returned to work).

“It’s taking a toll,” Stirling said. “As the infection works its way through the community, it touches people’s lives and their work, and there’s no real escaping from it. You see people die at work, and then you go home and have to worry about your family. Even the PPE use kind of wears on your soul, having to wear a mask for that long.

“It really comes at you from all fronts. It’s exhausting.”

At the same time, what he’s going through now reminds him of why he chose nursing as a profession in the first place.

“I’m proud of what nurses do every day, but it’s not something where we consider ourselves particularly heroic,” he said. “We put on our scrubs and we go to work, trying to keep our community safe and do what we can to help halt this.”

The nurse and lecturer

When the coronavirus struck San Diego County last month, Carol Suarez’s world was rocked on two fronts. Not only did it significantly raise her workload and stress level as a clinical nurse specialist at Palomar Health, but it cut short the class she was teaching at CSUSM. Suarez is both an alumna of the university – she earned a bachelor’s and two master’s degrees in nursing – and a lecturer in the School of Nursing since 2013. 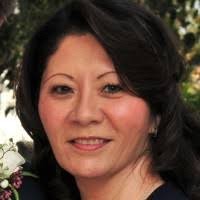 Because the course in the accelerated program involved clinical rotations, it was put on hold, with the hope of resuming at some point this summer.

“It’s hard for the students to understand because they want to get out there and be part of what we’re doing,” Suarez said. “But we’re doing everything we can to ensure that they’re safe. They’re not ready to be part of the nursing frontline staff yet. We want to make sure they get all the nursing education they need in order to practice effectively and safely.”

In her job at Palomar Health, for which she works in the medical centers in Escondido and Poway, Suarez isn’t on the front lines herself, but rather is supporting the nurses who are bearing the brunt of the pandemic’s impact. She helps educate and prepare them, and writes the policies and procedures that undergird their decision-making.

As with the Imperial County hospital, neither Palomar center has experienced a surge of COVID-19 patients yet, but both are bracing for one, with triage tents out front where many patients check in and are examined for COVID-19 symptoms, with only the most serious cases admitted.

“We have gotten our fair share of patients who have been positive,” Suarez said. “And we are anticipating getting a surge, so we’re doing everything beforehand to say, ‘OK, if it happens, we want to be ready. We want to make sure our staff are properly trained and that we have everything in place.’ ”

Suarez said the war against the coronavirus has been the most difficult experience of her nursing career to date. With so much still unknown, fear and anxiety are as much a part of her daily existence as the PPE she dons to protect herself.

“We need to be patient and understand that this too shall pass. And we’ve got to understand that, through all of this, we’re going to end up learning something along the way.”

The labor and delivery nurse

Around this time last year, Gina Lizarraga was giving birth to a baby son. She can hardly imagine what it would be like now. 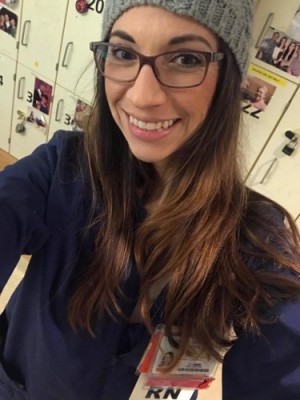 “If I had to be having my son now, I would be afraid to be in the hospital,” Lizarraga said. “I wouldn’t know if I was going to get COVID-19, if my newborn baby was going to get it. And not being able to have that big post-baby celebration, which everyone looks forward to. As a mom, I can see how that might be something that you look back on and say, ‘That was kind of sad and scary.’ ”

Lizarraga can speak to such scenarios with more authority than just as a mother. The 2012 CSUSM nursing graduate is also a labor and delivery nurse at UC Davis Medical Center in Sacramento. She’s not working a full-time schedule while she raises her son, but about a half-dozen days a month, she’s around pregnant women who are preparing to bring children into a frightening world and uncertain future.

“Even seasoned mothers who’ve been through it before have some anxiety under normal circumstances,” she said. “With COVID-19, all of that becomes heightened.”

The UC Davis hospital is limiting visitors during deliveries to just the spouse or partner, which means none of the traditional celebrations involving extended family and gifts and balloons.

“There’s possibly some loss of what people envisioned their birthing experience would have been a year ago,” Lizarraga said.

Lizarraga’s husband, John James, is also a nurse. He was one class behind her at CSUSM, where they met. James works in the intensive care unit at UC Davis Medical Center, but his team has not been identified as the primary one for treating COVID-19 patients.

That doesn’t make the fear any lesser.

“The idea of being at the hospital is scary,” Lizarraga said. “And when my husband goes to work, that scares me, too, him coming home. As nurses, in a way, we don’t know. Do we have COVID-19? Did we get it? Do we take 14 days? Are we permanently quarantining ourselves from everything? We just always assume that maybe we have it.

“I’m proud that I’m a nurse, but I’m more proud of the nurses and physicians that I work with because I see how much heart they have and how much they put out every day.”