Palliative Care Institute to be Renamed in Wake of Shiley Gift 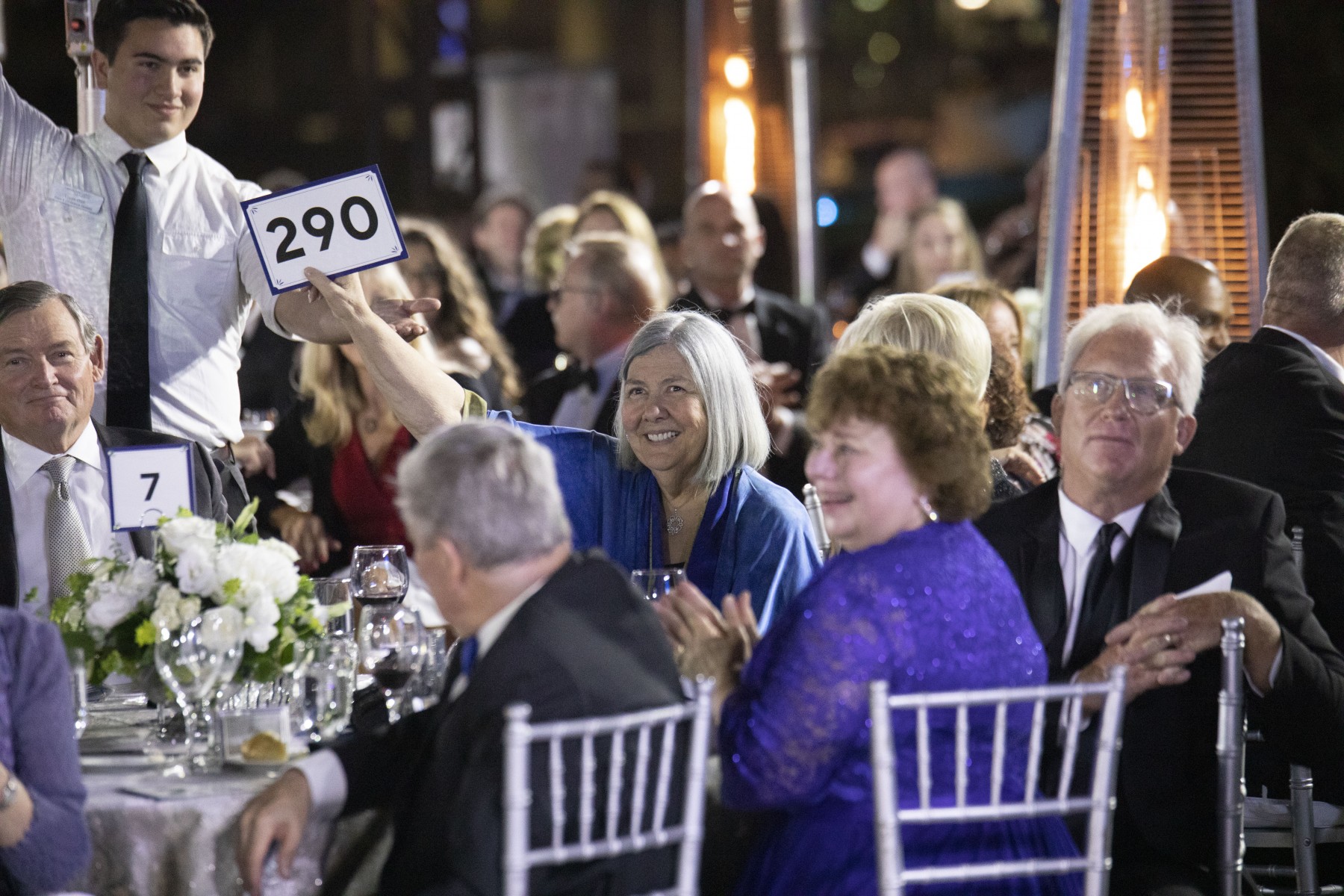 Darlene Shiley
The prominent philanthropist, pictured raising her paddle during CSUSM's annual fundraising gala on June 8, announced during the event that she has donated $2.6 million to the CSU Institute for Palliative Care. Photo by Andrew Reed

Shiley announced during Cal State San Marcos’ annual fundraising gala on June 8 that she has donated an additional $2.6 million to the Institute located on CSUSM’s campus. The latest gift brings Shiley’s total gifts to the CSUSM Foundation to $6 million, the majority of which has gone to the Institute, and makes her the most generous donor in the university’s history.

In recognition of her generosity, the CSU Board of Trustees approved changing the name of the Institute during its meeting on May 21 in Long Beach.

Shiley has a particular interest in palliative care that she developed as she cared for her husband, the renowned artificial heart valve inventor Donald Shiley, before he died of a difficult illness in 2010. Palliative care is health care that addresses each patient as a whole person, including his or her physical comfort, confidence, emotional well-being, spirituality and dignity.

“To have watched my late husband Donald decline over four years was truly devastating,” said Shiley, a San Diego resident. “But we both personally experienced the benefits of palliative care during the period, and as I quickly learned, palliative care isn’t just for those who are afflicted. It’s also for the loved ones and caregivers of people dealing with serious or chronic illness.

“The CSU Institute for Palliative Care is providing the necessary skills and tools that our health care professionals need while also building critical awareness of palliative care.”

Besides providing more support to the Institute, Shiley made the gift with the intention of paying tribute to her longtime friend, Dr. Karen Haynes, who is retiring at the end of June after 15½ years as CSUSM’s president. Shiley requested that the center be named the Shiley Haynes CSU Institute for Palliative Care, and CSUSM will pursue the name change after the requisite two-year period post-retirement for an individual who has served the CSU in an administrative capacity. 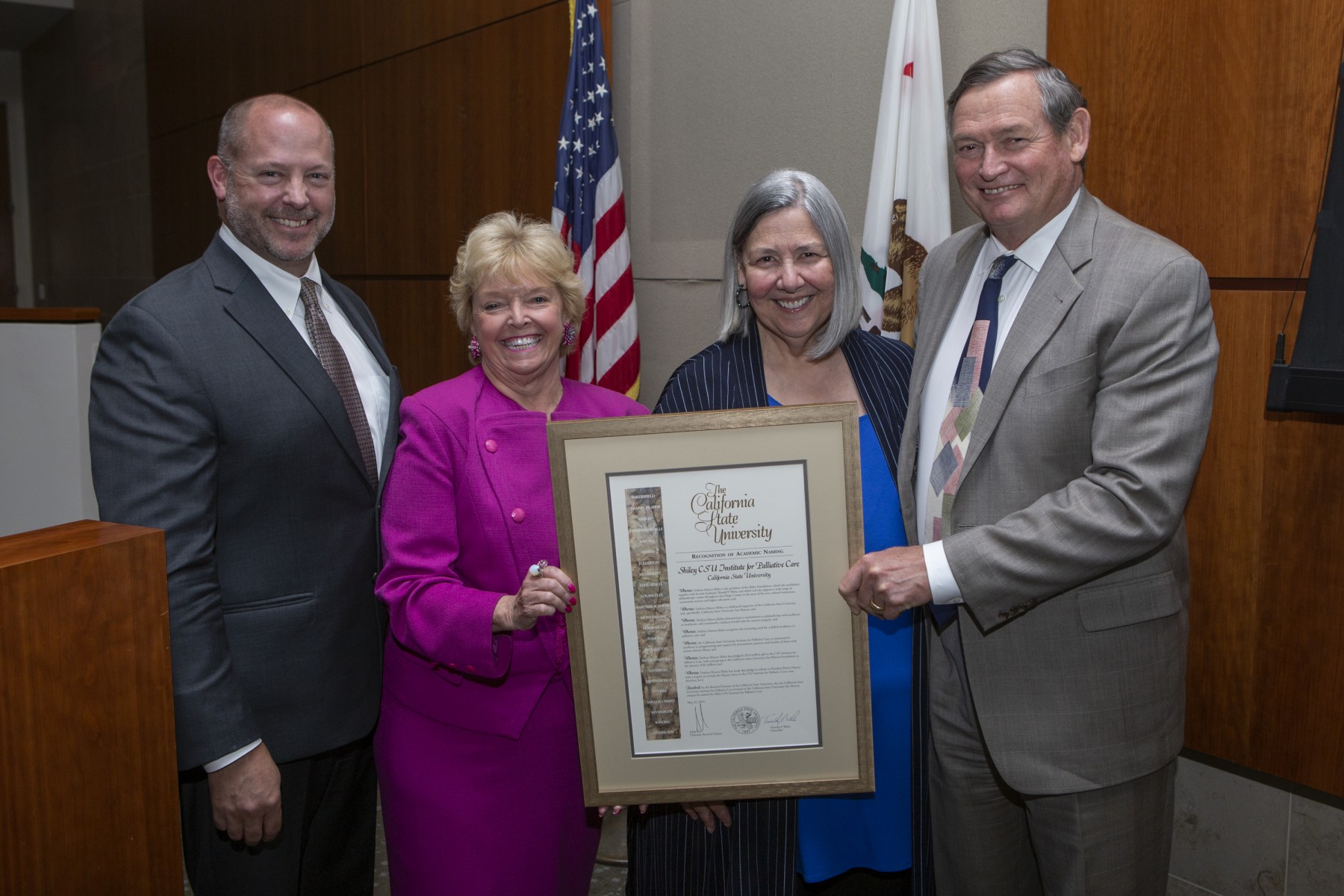 Darlene Shiley
The prominent philanthropist (second from right) poses with CSUSM President Karen Haynes, CSU Chancellor Timothy White (right) and CSU Board of Trustees Chair Adam Day after the May 21 Board of Trustees meeting where the Shiley CSU Institute for Palliative Care renaming was approved.

Haynes was the president when the Institute was launched in September 2012, becoming America’s first statewide educational and workforce development initiative dedicated to palliative care. A surprise $1.2 million gift from Shiley highlighted that event, along with a combined $1.2 million from the Archstone Foundation and the California Health Care Foundation.

The Institute has steadily grown under Haynes’ leadership and thanks to Shiley’s philanthropy. In March 2015, Shiley gave an additional $1.8 million as part of CSUSM’s first comprehensive fundraising campaign, which ended last December.

“I am extremely grateful for President Haynes’ exceptional support of this important endeavor,” Shiley said. “As a professional social worker, she immediately understood the program content and collaboration required to make the Institute a success. I look forward to eventually seeing her name alongside mine and my late husband Donald’s at the Shiley Haynes CSU Institute for Palliative Care.”

Shiley believes that Haynes, with the combination of her academic experience and leadership ability, had the ideal mix of skills to bring the Institute to fruition. Haynes holds both a master’s and a Ph.D. in social work, and her work always has been at the macro level – examining, educating and advocating for the influence and change of practices and policies that would effect change for the greater good, particularly among various populations who didn’t know how to speak on their own behalf.

“There are a lot of great leaders and great presidents of universities, but this particular topic, it wasn’t an easy one,” Shiley said. “People don’t like to think about palliative care. It’s not an easy thing to watch someone you love die over a period of time. So Karen was uniquely qualified to make it happen.”

Haynes said she was surprised when Shiley called her in April and told her that not only would she be donating an additional $2.6 million to the Institute, but also that she would be requesting to include Haynes’ name with hers on the title.

“It will be another transformational gift to allow the CSU Institute for Palliative Care to continue to be the national leader in educating the present and future workforce and the community, to assure that this important work that touches us all can continue, will expand, and will eventually help change health care delivery,” Haynes said.

Palliative Care Institute to be Renamed in Wake of Shiley Gift