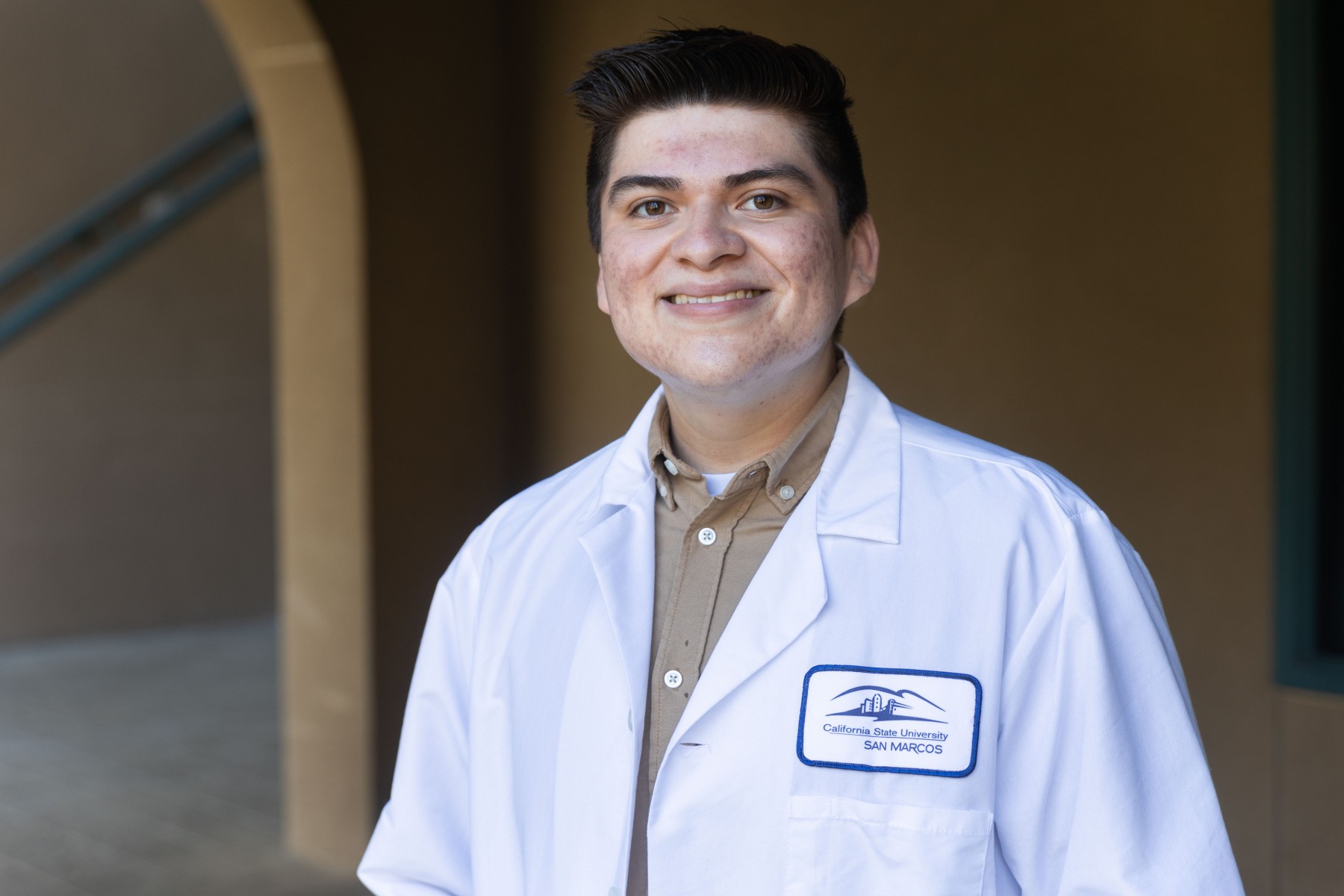 Ivan Gonzalez is a first-generation Mexican American senior majoring in biological sciences with a minor in Spanish. Photo by Andrew Reed

Everyone arrives on campus at Cal State San Marcos having taken a unique journey to get here.

Whether it’s a straight path or the road less traveled, every Cougar has their own set of challenges in getting to campus.

And then there’s Ivan Gonzalez.

As a child, he walked miles every day from Mexicali across the border into Calexico to attend school in the United States. Barely understanding English, he faced challenges that were equally daunting once he arrived at class.

His goal was making it to class every day on time. Nary was there a thought of eventually pursuing higher education.

In fact, what he witnessed in high school (his family had moved to Calexico by then) was that whatever small thoughts the seniors had about college were washed away because the community environment was much more focused on work.

“Many of the students who graduated from high school back home would often get a full-time job to begin paying for their own expenses and help their parents out financially,” said Gonzalez, who graduated from Calexico High School in 2017. “Thus, I then began to follow those footsteps of basically applying to full-time jobs right after finishing high school. I didn’t believe I was higher education material since my level of English was too far behind.”

But something stirred inside him. He knew there was more for him, particularly after he had spent so much of his high school years working extra hours to keep his college aspirations alive.

He set out to prove that a first-generation Mexican-American student like him could not only complete the journey to earning a high school degree, but could go much farther.

“This scholarship award made me feel super special,” Gonzalez said. “It just served as proof that I was meant for higher education. This award is a recognition and validation that all of my hard work is finally paying off. Although I am still not where I want to be, the funds allocated through this award will go toward applying to graduate school (physician assistant) programs and will help me achieve my long-term goal of becoming a PA.”

Gonzalez is an active member of the Educational Opportunity Program (EOP), the College Assistance Migrant Program (CAMP) and the Pre-Health Society, for which he serves as secretary. He also is a medical intern and interpreter at Palomar Medical Center, assisting medical providers and patients.

This year, he is working in biology professor Dennis Kolosov’s lab, where he is researching epithelial cell separation of the Malpighian tubules of the cabbage looper caterpillar.

He happened to be in Kolosov’s lab when he found out about the Trustees’ Award.

“I remember I was cleaning and feeding the caterpillars when my friend Ashlyn DM'd me on Instagram with a huge congratulations,” said Gonzalez, who is minoring in Spanish. “At first I was in shock. I had no idea what was happening. I instantly placed the caterpillar down and checked my phone. As soon as I opened my Instagram, I saw the @cstem_csusm Instagram post, and that was the best thing ever. I remember shouting, and my lab mates Emilie and Alexis stared at me, confused. I told them what had happened, and they instantly gave me a huge hug. It was the best day ever.”

Last year he worked in biology professor John Eme’s lab, which focuses on comparative integrative and evolutionary vertebrate physiology. He assisted with a project on the growth of young alligators, and he assisted a graduate student with her project on the thermal biology of fish.

“Ivan's work in two separate labs is one small example of his excellent performance as an undergraduate academic,” Eme said. “Ivan is a wonderful person, engaged in his coursework, thoughtful when it comes to interacting with his fellow students. He is a joy to have in the classroom.”

In addition to Eme and Kolosov, Gonzalez pointed out several other members of the CSUSM community who have been crucial to his successful journey.

“A big shout-out to Dr. Jacqueline Trischman, Shauna Mendez, Gina Lopez, Ricardo Pliego, Julia Garcia and so many more,” said Gonzalez, referring to the dean of the College of Science, Technology, Engineering, and Mathematics; three members of the library services team; and the CSTEM Success Center coordinator. “There are a ton of more people who have influenced me here at CSUSM, too many to name. I want to thank everyone who has been a part of my CSUSM journey. I couldn’t have done it without their help and support.”

Gonzalez plans to attend graduate school to pursue a career as a PA. He wants to work in underserved and underrepresented communities, giving back while also helping to transform the health care system into one that promotes a healthier lifestyle for all.

To do that, he’ll rely on the support of those around him. From staff and professors on campus to those cheering him on from home, his success will come with several big assists.

“My family has been the best support system I have ever received,” said Gonzalez, who was recognized by the Alpha Lambda Delta National Honor Society for first-year students as a prime student and scholar in its honor roll list. “Their upbringings of constant hope and positivity give me the strength to keep moving forward. From calling my parents at 2 a.m. when I need moral support to celebrating with them when I do good in my exams, presentations, projects, etc. My sister and brothers all check up on me to see how I am doing mentally more than anything else. They treat me with Starbucks drinks often so that the caffeine keeps my brain rushing, which helps me stay up late to study for upcoming exams and finishing up assignments.

“In all honesty, they are my everything, and without them I do not think I would have been here where I am today.”