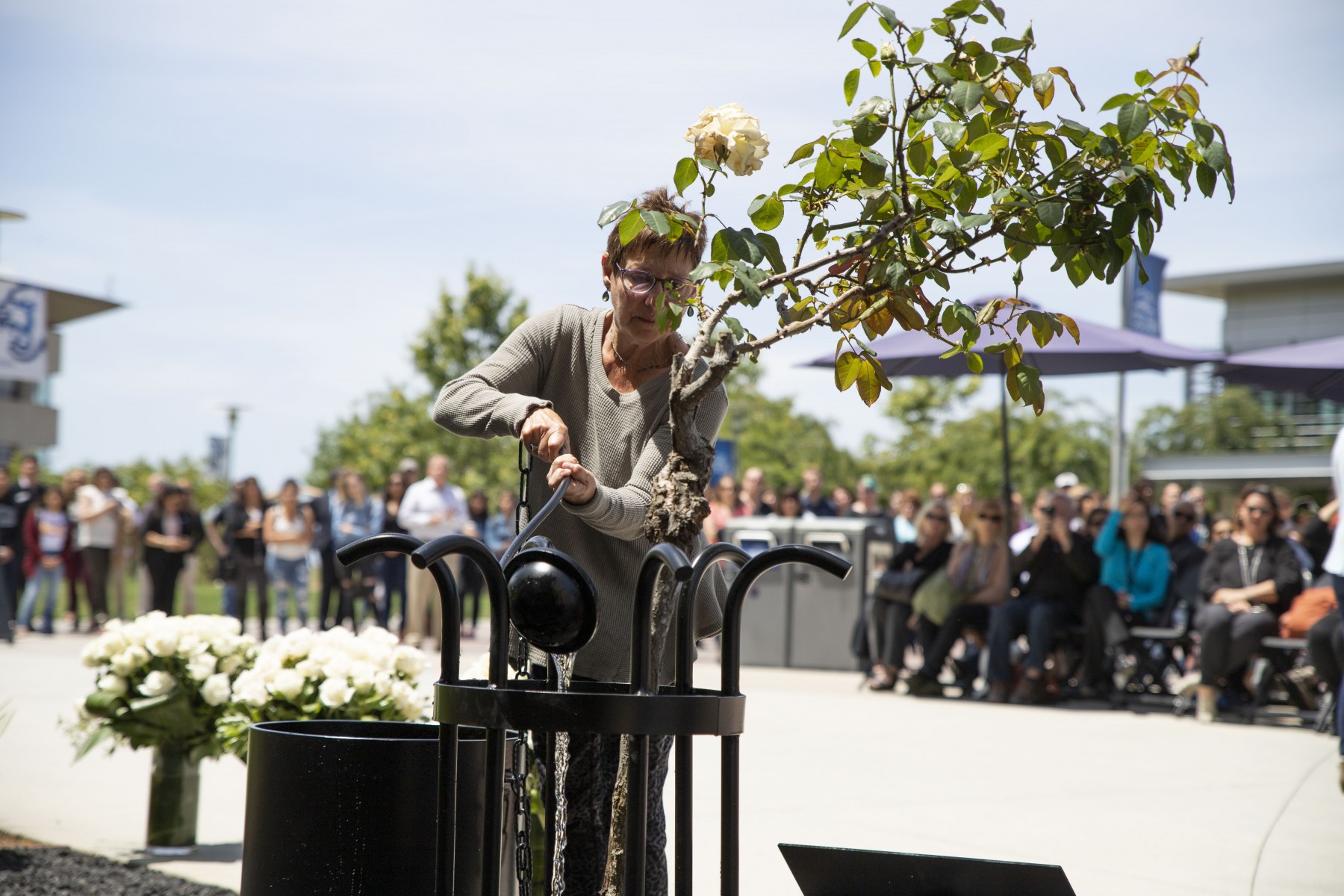 White Rose Memorial
Andrea Liss, the arts professor whose class inspired the original design of the memorial in 2003, pours water on the rosebush during a rededication ceremony on campus. Photo by Andrew Reed

The rededication of the White Rose Memorial at Cal State San Marcos had been in the works for months.

But the event took on an added significance in the wake of the shooting last weekend at a Jewish synagogue in Poway.

Hundreds of people turned out for the ceremony at Forum Plaza on Wednesday afternoon, the eve of Holocaust Remembrance Day, to stand in solidarity and celebrate a memorial that symbolizes resistance to hate in all of its forms.

“Like all of you, I was dismayed and disheartened to learn that the alleged shooter was a CSUSM student,” Haynes said. “His actions and beliefs are antithetical to everything we stand for at this university. In trying to find some comfort in this difficult time, it has been reassuring to see how our campus has come together in solidarity and support of the victims, their families, friends and our entire community.”

The White Rose Memorial is an interactive work that honors the brave acts of a committed group of college students who were executed for peacefully resisting the Nazi regime in 1943. Designed by CSUSM student Cynthia Joseph in 2003, the memorial fell into disrepair over the years, and a movement to restore it was aided last fall when $5,500 was raised in connection with Giving Day.

Numerous speakers on Wednesday emphasized that the meaning of the White Rose Memorial and what it represents is especially urgent in the wake of the recent tragedy.

“For me, the White Rose means so much,” said Sophie Nadler, the president of Hillel, a Jewish student organization on campus. “My heart warms every time I walk past it. I think it symbolizes the strength of the CSUSM students in our community and how we all fight against hate. Walking by this memorial every day will continue to remind me that there are so many people fighting against anti-Semitism.”

Joe-Joe McManus, CSUSM’s chief diversity officer, observed that the motto of the White Rose Society – a small group of non-Jewish students and professors from the University of Munich – was, “We will not be silent.” He urged members of the campus community to take that message to heart.

“Unfortunately, the terrorism that hit Chabad of Poway is nothing new,” McManus said. “We know what comes next. As the focus shifts to the next story on the news, the next issue, our daily grinds, we will do the soul-searching that good folks do when something terrible happens within our community. And like the White Rose, we will raise our voices in opposition to hate and oppression.”

After the speech by Andrea Liss, whose class on Holocaust art inspired the original memorial, the speakers gathered by the restored version and took turns pouring water from the new galvanized steel watering drum onto the rosebush. The interactive feature was created by Joseph as a means of giving the rose life “in a symbolic act of solidarity, caring and justice.”

Hilary Taylor, the president of the Jewish Faculty-Staff Association, used the metaphor of the watering – and the potential for overwatering – as a reminder that people must be ever vigilant in the struggle against hate.

“Water it three months from now. Water it five years from now. Keep it alive,” Taylor said. “Take action not just today, not just while it’s in the news. Everything we can do to nurture love and negate hate can happen if we take action.” 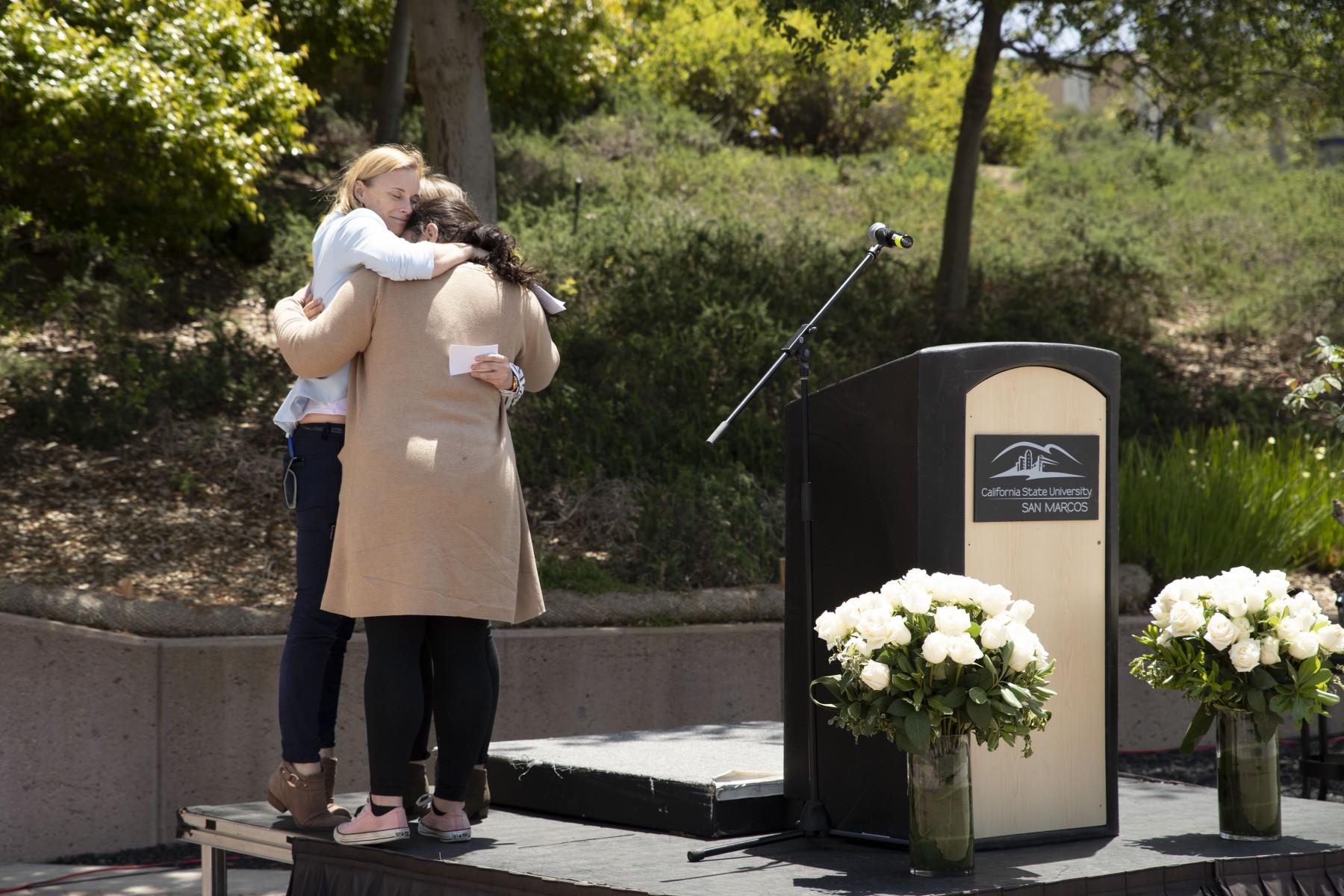 White Rose memorial
Hilary Taylor, the president of the Jewish Faculty-Staff Association, hugs two CSUSM students after they spoke at the ceremony. Photo by Andrew Reed