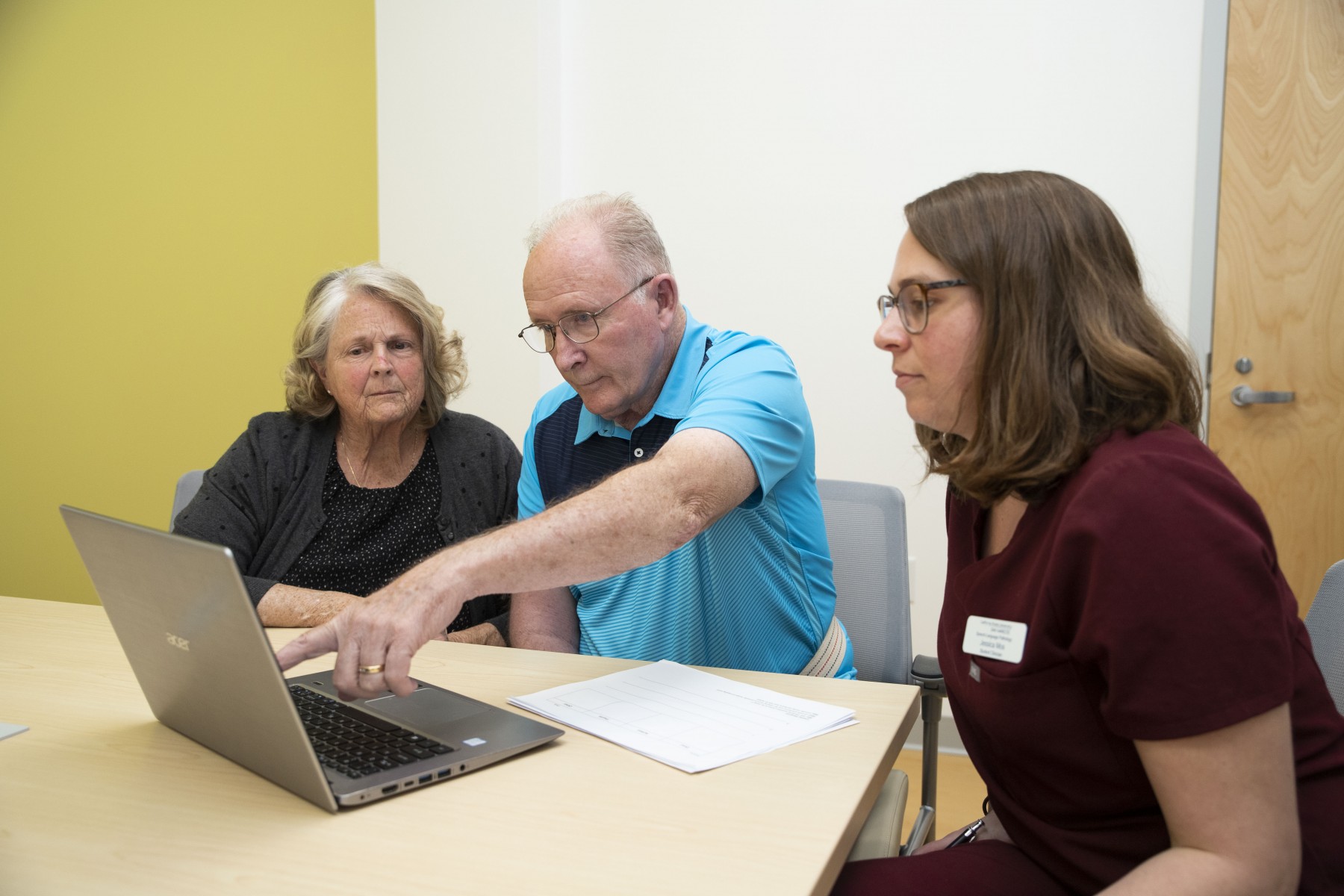 Norm Bishop (center) and his wife, Alice, work with CSUSM student Jessica Mos at the Speech-Language Clinic in the Extended Learning building in February. The clinic soon shut down because of the coronavirus and is now offering telehealth services. Photo by Andrew Reed

It would be difficult to overstate the challenge that Norm Bishop faced the first time he attempted a virtual therapy session through the Cal State San Marcos Speech-Language Clinic.

For the previous few years, Bishop had been a steady and familiar presence at the physical clinic, relying on close, one-on-one interactions with CSUSM speech-language pathology students to help reverse the effects of the debilitating stroke he suffered in 2015. Even before the stroke changed his life forever, he had never owned a cellphone, had very little interest in technology.

So imagine the disorientation Bishop felt as he and his wife, Alice, logged on for their initial remote session in early July when the clinic opened back up for summer after nearly a four-month hiatus because of the coronavirus pandemic.

“He couldn’t make sense of the relationship between somebody in a screen and him responding to that person in the screen,” said Alice Bishop, Norm’s constant companion for his therapy. “He couldn’t even wrap his head around the fact that somebody was talking to him over a square box.”

And because Norm wasn’t used to speaking into a machine, his voice was barely audible. One of his first projects was to repeat, again and again, the line, “I need to speak louder now so people can hear me.”

Over the next couple of weeks, he gradually grew accustomed to the foreign medium.

“Well, you can’t beat the in-person interaction. You can laugh and point and see the mouth movements better,” Alice said. “But this is working out a lot better than I ever anticipated.”

The summer session of the Speech-Language Clinic (SLC) marked the first use of telehealth at CSUSM since the dawn of the pandemic – the trial run for a practice that will continue this semester and may become a staple throughout the health care industry depending on how long COVID-19 lingers in the United States.

Telehealth, defined as the use of digital information and communications technologies to access health care services remotely, is not a new concept. But its utilization has skyrocketed during the pandemic as a means of keeping both patients and health care providers safe and reducing the potential strain on the nation’s health care system.

“We’re being told by our national governing board that telehealth is going to stay for some time, past COVID,” said Laura Coca, the supervisor of the SLC and a lecturer in the speech-language pathology department. “Not that we’re going to be solely doing telehealth, but we’re going to be seeing a lot more folks that way.” 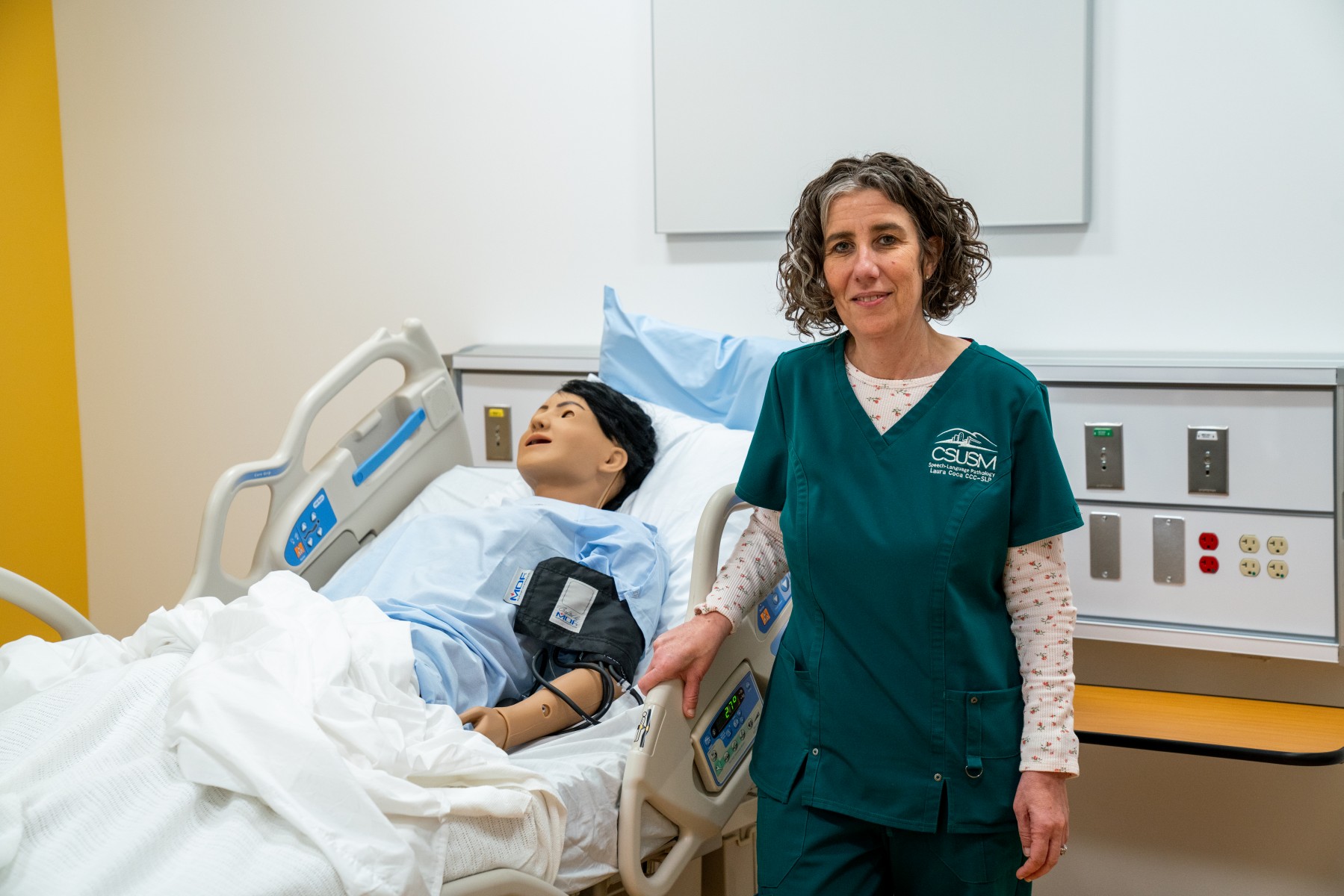 Laura Coca, supervisor of the Speech-Language Clinic, stands in a simulation room before the clinic was forced to shut down in March. She's now overseeing sessions via Zoom. Photo by Andrew Reed

The SLC began as just a summer clinic before its services expanded to be offered year-round in 2014, because it had become challenging to find placements for students in adult facilities. The clinic serves as one of the four placements that students pursuing a master’s degree in speech-language pathology must cycle through, with the commitment totaling 400 clinical hours. During a typical academic year, the SLC features about 15 graduate students and three supervisors working with around 25 community clients, most of whom are middle ages or older and are impaired by neurological conditions.

As of last spring, of course, it ceased to be a typical academic year. The clinic, which used to be housed in a leased building off Furniture Row in San Marcos, moved into its spiffy new home in the Extended Learning building for the 2019-20 school year, featuring eight clinic rooms, a control room for the supervisors and multiple simulation rooms. But the operation shut down in mid-March, about the same time as the university switched to virtual instruction.

While the speech-language students went to an online program called Simucase to keep their clinical skills fresh, the community clients were left to do without one of their favorite social and psychological outlets for a period of months.

“It was really hard for the clients,” Coca said. “They really love interacting with the students and with each other, so not having the clinic was certainly a bummer for them.”

Alice Bishop said she and Norm stayed in touch with many of their friends from the clinic during the down time and even went on a picnic with one man. “But otherwise,” she added with a smile, “it was just the two of us staring at each other. I don’t know who wanted to slap who first.”

The return of the SLC this summer was just the antidote they needed for their quarantine malaise. Coca had worked diligently with IITS in the preceding weeks to ensure that the technology would work smoothly; then, during the first five weeks of the summer session, while the students trained on the new virtual platform, Coca met with each of the clients remotely to acclimate them to their new normal.

For its telepractice, the clinic is using Zoom for Healthcare, which is like the Zoom that most of the nation has grown familiar with, but adds an extra layer of security that makes it compliant with HIPAA, the 1996 law governing the privacy of certain health information.

“We all have encrypted computers, and if we were to record something, it would go automatically to an encrypted drive at the university,” Coca said. 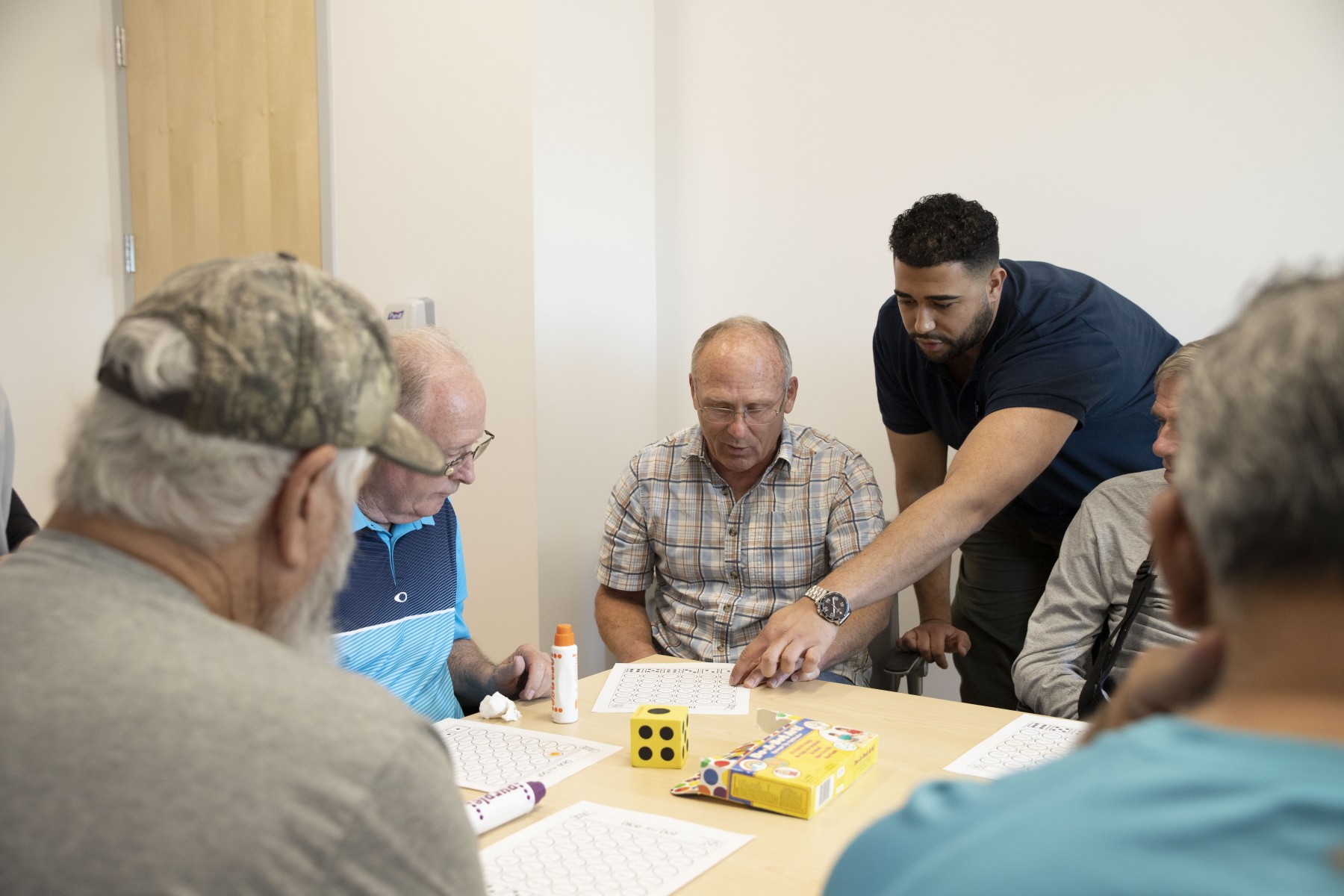 At the advice of its national certification board, the SLC returned this summer by serving only clients who aren’t profoundly impaired. But because the clinic will be virtual only for the rest of the calendar year, and likely beyond, it developed a workaround that will allow clients who rely on assistive communication devices to take advantage of the same Zoom service as everyone else.

Coca said it’s uncertain whether, or to what extent, the SLC will continue to employ telehealth once the pandemic is over.

“I think it’s more convenient for certain patients,” she said. “We’d be able to serve a wider scope of patients – those who are homebound, people who are in rural communities. If we could make it something that is viable for the students and the community members, it could become a long-term asset.”

The Bishops will remain clinic fixtures regardless of the format. Five years ago, the Colorado couple were visiting their two adult sons in San Diego County when Norm had a stroke. After spending a month in the intensive care unit at Tri-City Medical Center, he was transferred to a nursing home in Vista, where he had a second stroke. Following another stint in both the ICU and the nursing home, he was finally discharged.

The Bishops, though, never moved back to Colorado. Oceanside became their home; it’s where they still live today. Norm began to undergo speech therapy at Tri-City, but his therapist recommended that he try the clinic at CSUSM because he could receive greater personal attention without any fear of his insurance ceasing coverage. The service at the SLC is free, of course.

“It’s probably the best thing we’ve ever done,” Alice said of the move. “We would gladly pay for what Norm is getting out of this.”

Alice says Norm feels invigorated by being in the presence of college students and that the clinic has designed a program that is tailor made for his needs and limitations.

So even though Norm prefers in-person contact to the “square box,” the Bishops’ devotion to the Speech-Language Clinic will outlive their days of Zoom sessions.

“Norm loves speech any way you can give it to him,” Alice said. “He’s willing to improve, and whatever they can do to help him, he’s going to be on board. We’re in it for the long run.” 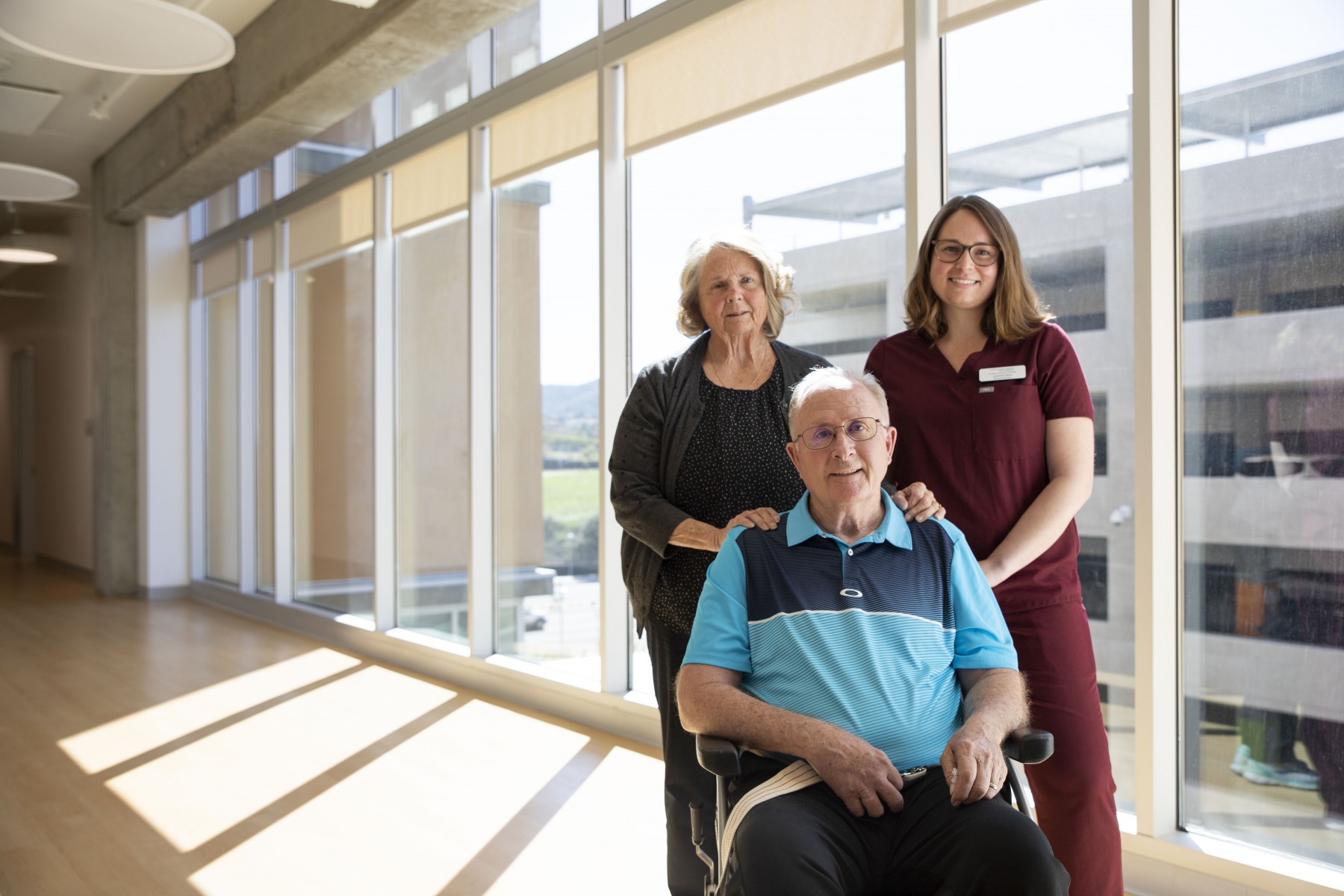 "We’re in it for the long run," Alice Bishop (left) said of the services offered by the Speech-Language Clinic. She's pictured at the clinic in February with her husband, Norm, and Jessica Mos, a master's student in speech-language pathology. Photo by Andrew Reed

Cal State San Marcos will bring entertaining arts programming to the campus and surrounding community while giving a boost to its School of Arts through a new partnership.  CSUSM will serve as the …
Read more

The Latin@/x Center (LXC) will host a virtual celebration to mark its fifth anniversary at noon on Sept. 17. “Given the Hispanic Serving Institution (HSI) status of the university and the high …
Read more

The California Health Care Foundation (CHCF), a nonprofit philanthropy, has been working since 1996 to improve the state’s health care delivery system and expand access to care and coverage, …
Read more
NewsCenter