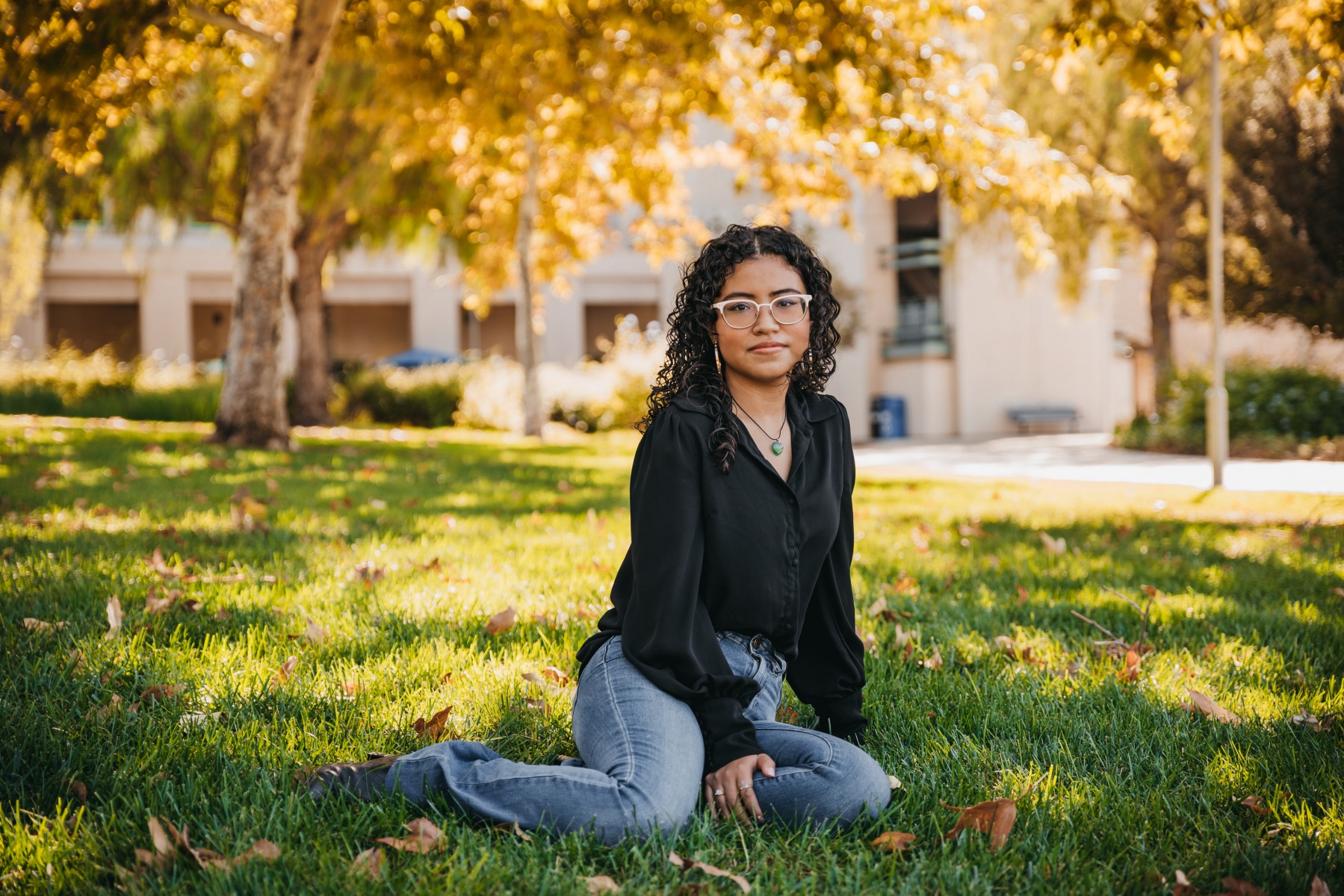 Economics student Lesly Rodriguez is helping North County children through her work with A Step Beyond, an Escondido-based nonprofit that serves low-income youth. Photo by Ryan Wolf

Growing up in San Marcos, Lesly Rodriguez’s family didn’t have a lot of money.

Her parents worked a lot. Often, that not only meant making sacrifices, but also less time for her family to spend together.

But as an elementary school student, Rodriguez didn’t know of her family’s financial struggles. She had a normal and happy existence that eventually led her to Cal State San Marcos, where she’s now a senior on the cusp of graduating with an economics degree.

That healthy existence came in part thanks to a strong support system that included a nonprofit community program that helped families like hers stay engaged together. That program included nutrition classes, weekend activities where parents could garden with their children and planning family field trips.

Giving back to her community has been on the top of Rodriguez’s list for more years than she can remember.

She’s doing that and so much more with A Step Beyond, a local group serving over 200 San Marcos and Escondido low-income youth. The organization provides underserved youth with opportunities that greatly expand their expectations and ambitions through dance education, academic support and family services.

“It's important because a lot of the time dance really is just a place where the students get to explore what their movements are and express themselves to that,” Rodriguez said. “I think it's also really important that not just dance, but the arts in general are more accessible to all communities. Oftentimes the reason why people don't get into dance or into the arts is because sometimes it gets really expensive. Dance classes are not affordable for a lot of families. So sometimes families don't even have that as an option.”

Rodriguez began as an intern with the nonprofit group and was recently hired in a paid capacity thanks to the affect she has had in a small period of time along with some generous funding.

Although A Step Beyond is always popular in the community, Jennifer Oliver, the organization’s artistic director, recognized a particular need last summer in light of so much face-to-face time missed due to the pandemic.

Thanks to starting Rodriguez as an intern before the summer began, A Step Beyond was able to quickly reconnect with families.

“Lesly assisted us in extending our staff resources so that we were able to provide a greater service to our community and access to an array of exciting summer programs for youth,” Oliver said. “As many of our youth had spent the last year learning online and feeling an overall lack of motivation for learning, access to quality summer enrichment programs assisted in both their physical and mental well-being. Because of Lesly's support, over 64 students participated in summer learning camps with 348 total hours in summer learning experiences outside of A Step Beyond programming.”

Dance professor Karen Schaffman provided oversight of Rodriguez’s internship from the CSUSM side. Nhu Nguyen and Oliver provided A Step Beyond staff oversight, and with the help of CSUSM music professor Merryl Goldberg and The San Diego Foundation, Rodriguez was provided with a stipend for her efforts.

Rodriguez also assisted in the A Step Beyond Dance Intensive and Dancing in Nature programs, which allowed the staff to make more meaningful connections with individual youth.

“Initially, I think because I was someone new coming into their space, I still had to work to gain their trust and to make connections with them,” said Rodriguez, who had previous experience working with kids with autism. “And I think that just comes from a sudden new person coming into the space that they're not familiar with. But I started to get to know them. And I really enjoyed seeing the students whenever I went over there, especially when I helped out with Dancing in Nature. It was a little more intimate, so it was me and the director, a nature specialist, and then five or six students. We spent the whole week together and I got to know their worries as well because some of them had worries about going to college.”

Rodriguez not only assisted teaching artists during summer dance intensive classes, she also led dance classes. She also planned the curriculum while co-facilitating for the Dancing in Nature program.

“Lesly has a very calm and thoughtful presence,” Oliver said. “As she led check-ins and added her reflections to the learning circles, she would invite students to slow down and think more deeply about their experience. Lesly was genuinely proud of our youth's accomplishment and was generous in her support and validation of their work. As a youth leader she modeled a kind and reflective learning presence that the students appreciated and admired.”

Growing up in a Mexican family, dancing was seemingly part of every gathering. When she got to nearby Mission Hills High School, she took a dance class but learned more while participating on the color guard team.

Upon her arrival at CSUSM, she took an introduction to dance class as part of her general education requirement. She found herself surrounded by trained dancers, but that didn’t discourage her.

She eventually took another dance class in the summer and will finish her undergraduate work this spring with a minor in dance.

Rodriguez plans to use her economics degree to figure out ways to continue to fund community programs like A Step Beyond. And she may even teach a dance class or two.

“During the internship, Lesly was drawn to serving her community and providing families and youth access to opportunities that may feel out of their reach,” Oliver said. “She was proud of the work she did and felt inspired by A Step Beyond's mission. I truly hope that she pursues a career in service as she would be such a great asset to her community and would find great success in nonprofit leadership. We appreciated Lesly so much that we were able to hire her to continue working with youth and families thanks to a small grant and some funds we had set aside.

“We cannot be happier with her dedication, her thoughtfulness, her professionalism and her positive presence. Our community loves having her around and we are so thankful CSUSM promotes and advocates for students to have experiences serving their local community.”

Whatever the future holds for Rodriguez, she will serve her community in some capacity.

“Without that program me and my family wouldn't be in the spot that we are now,” Rodriguez said of the nonprofit community program her family was involved in when she was younger. “Now we're doing so much better. My parents were able to get better jobs, or they don't have to work as much anymore. So overall it doesn't only help the students, but it really helps the families. I know at A Step Beyond they’re also really family oriented. So they really make sure that the parents are involved, that there's a space not only for the students, but for the families as well.”