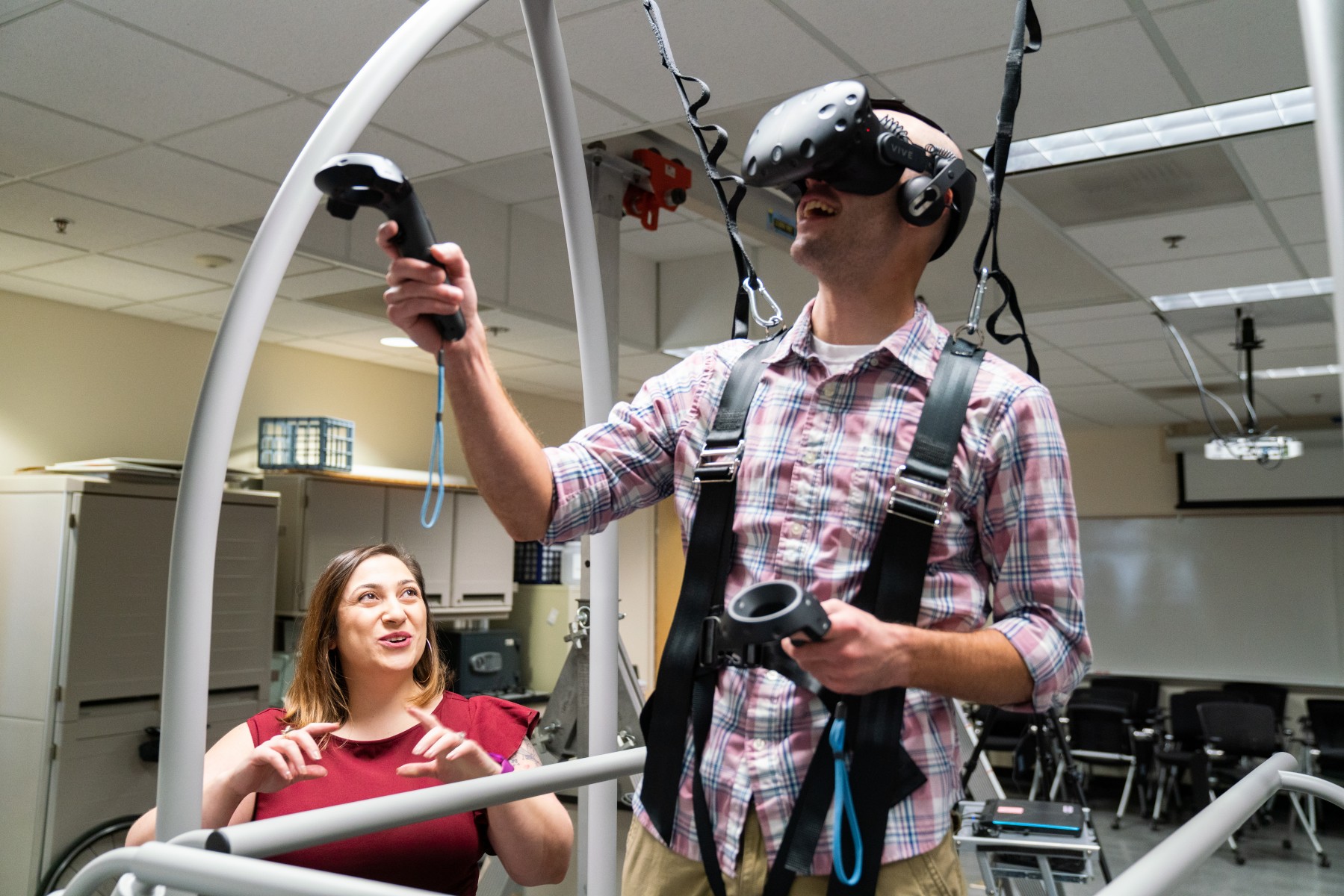 Kinesiology professor Tumay Tunur (left) guides a lab technician as he tests a virtual reality headset while walking on an instrumented treadmill. Photo by Chandler Oriente

Tumay Tunur figured that it was a long shot when she applied to be a speaker at the 2020 Game Developers Conference.

The GDC, after all, is the premier professional event for the video game industry, annually bringing together about 30,000 people – from programmers, artists and producers to game designers, audio professionals and business leaders. Tunur, by contrast, is a kinesiologist who’s in her third year as an assistant professor at Cal State San Marcos.

As part of her teaching and research, however, Tunur makes extensive use of cutting-edge technology related to virtual and augmented reality, positioning herself as a rare academic whose message holds appeal to the GDC crowd. And indeed, she was awarded one of the coveted speaking slots, surprising even herself.

“I just wanted to see what would happen if I applied and maybe make some connections along the way,” Tunur said. “It is definitely major validation. It is reassuring that I’m on the right path and my work is being recognized, even though I’m new in the field.”

The GDC was scheduled for March 16-20 in San Francisco, but in late February, the event was postponed because of concerns about the coronavirus. Organizers hope to stage the conference later this year instead, and Tunur said she would love to attend if it’s safe to do so. In the meantime, she has been asked to record the presentation that she planned to deliver at the conference, and videos of all the speakers will be posted on the GDC’s YouTube channel.

Tunur’s speech for GDC is titled “Designing Serious Games for Rehabilitation in AR and VR Environments.” It concerns an app she developed that’s a basic reaching test, designed for upper body mobility rehab. In the experimental project, she compared the experience of playing the same game using different headsets – one with augmented reality (AR), in which you still see your surroundings but other visuals get overlaid in the environment, and one with virtual reality (VR), which places you in a whole new environment.

Tunur measured the motor demands of the game with a motion capture system and documented participants’ experiences via surveys. 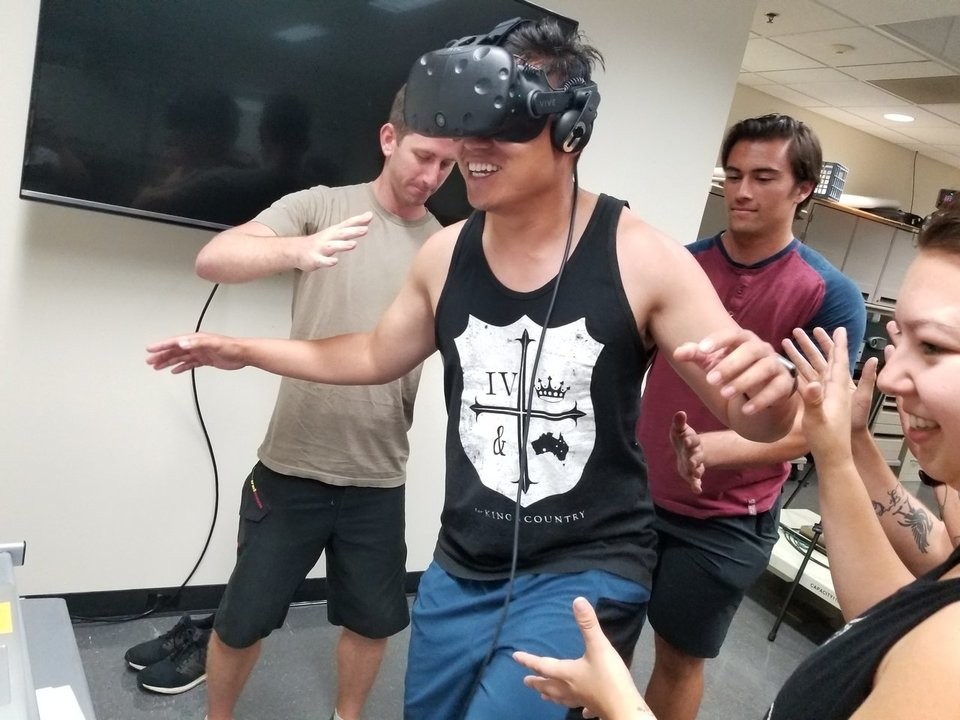 Kinesiology students experiment with a VR headset as part of Tumay Tunur's class on motor control.

Tunur discovered the field of kinesiology, and VR technology, almost by accident. A native of Turkey, she earned a Ph.D. in cell and molecular biology from Tulane University in 2011. She also has danced professionally, and as a postdoctoral fellow at Syracuse University, she was part of a program that allowed people with Parkinson’s disease to participate in dance classes utilizing augmented reality.

Use of the AR app, Tunur found, not only improved the individuals’ balance and mobility, but also helped them stick to a routine of physical activity, which can be a challenge because of feelings of isolation and frustration that stem from the disease.

“That’s why I was so excited about getting into this field and further investigating it,” Tunur said.

VR technology is very expensive, however, so it wasn’t long after she arrived at CSUSM in 2017 that Tunur set out to secure the grants necessary to outfit the university with state-of-the-art equipment. Less than three years later, she’s the proud director of the Movement in eXtended Reality (MiXR) lab, a space in University Hall that features several high-end VR and AR headsets as well as a Bertec instrumented treadmill, which includes force plates that measure reaction force and center of gravity for gait analysis. It also comes with a software development kit to be integrated into virtual reality. The treadmill, which Tunur has nicknamed the “holy grail,” cost $135,000 and required more than a year of fundraising.

On a visit to the MiXR lab earlier this semester, CSUSM President Ellen Neufeldt tested the HTC Vive virtual reality headset and came away so impressed that she joked to Tunur that she wanted one for her office.

As fancy as the equipment is, Tunur doesn’t keep it under lock and key. On the contrary, she makes heavy use of VR technology in her primary class for undergraduates, Kinesiology 301: Motor Control and Learning. Based on research done at least partly in the MiXR lab, more than 20 of Tunur’s students presented last semester at the Southern California Conferences for Undergraduate Research at CSUSM.

“I’m just there to supervise, so my students are completely independent, from study design to data collection, analysis and presentation,” said Tunur, who also was one of the key faculty members involved in developing the VR-heavy Inspiration Studios in Kellogg Library. “They get very familiar with all the equipment and experience the motor control concepts in a very different way that feels more memorable, more enjoyable. They love coming to the class.”

“I like how the experiments are not only educational but also super fun,” said Yesenia Betancourt, one of Tunur’s students. “The course isn’t just some ordinary GE; it’s a very interesting class with engaging methods that help people retain the information better in the long term.”

Tunur is excited about the vast potential of virtual reality in both classroom and research settings.

“It’s being utilized in everything from pain management for amputated phantom limbs to kids with autism to medical surgery training or in military high-risk environment training,” she said. “But the science needs to catch up to the pace of the development of technology. So that’s what we’re trying to do.” 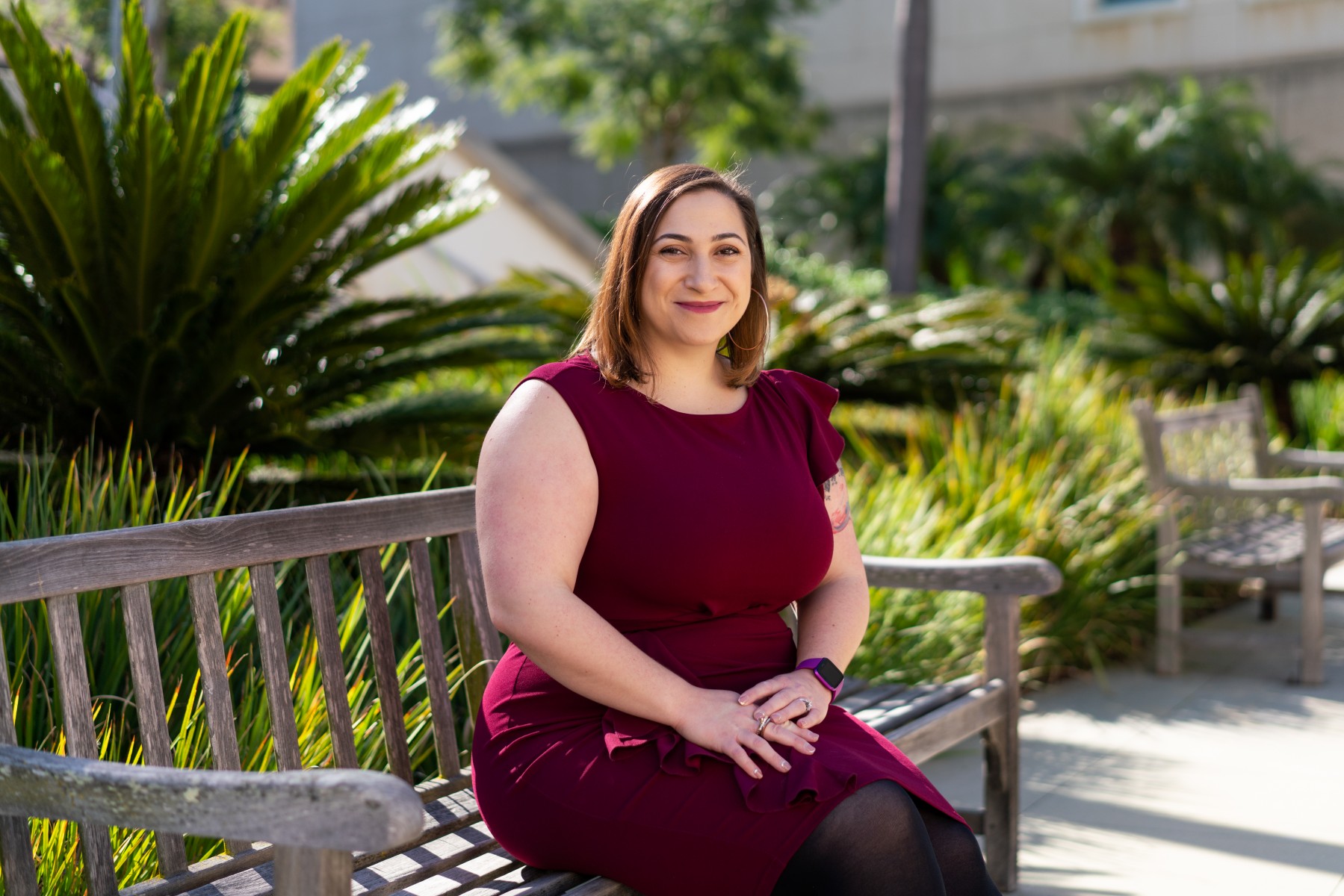 Tumay Tunur was scheduled to speak at the Game Developers Conference in San Francisco this month before it was postponed because of the coronavirus. Photo by Chandler Oriente