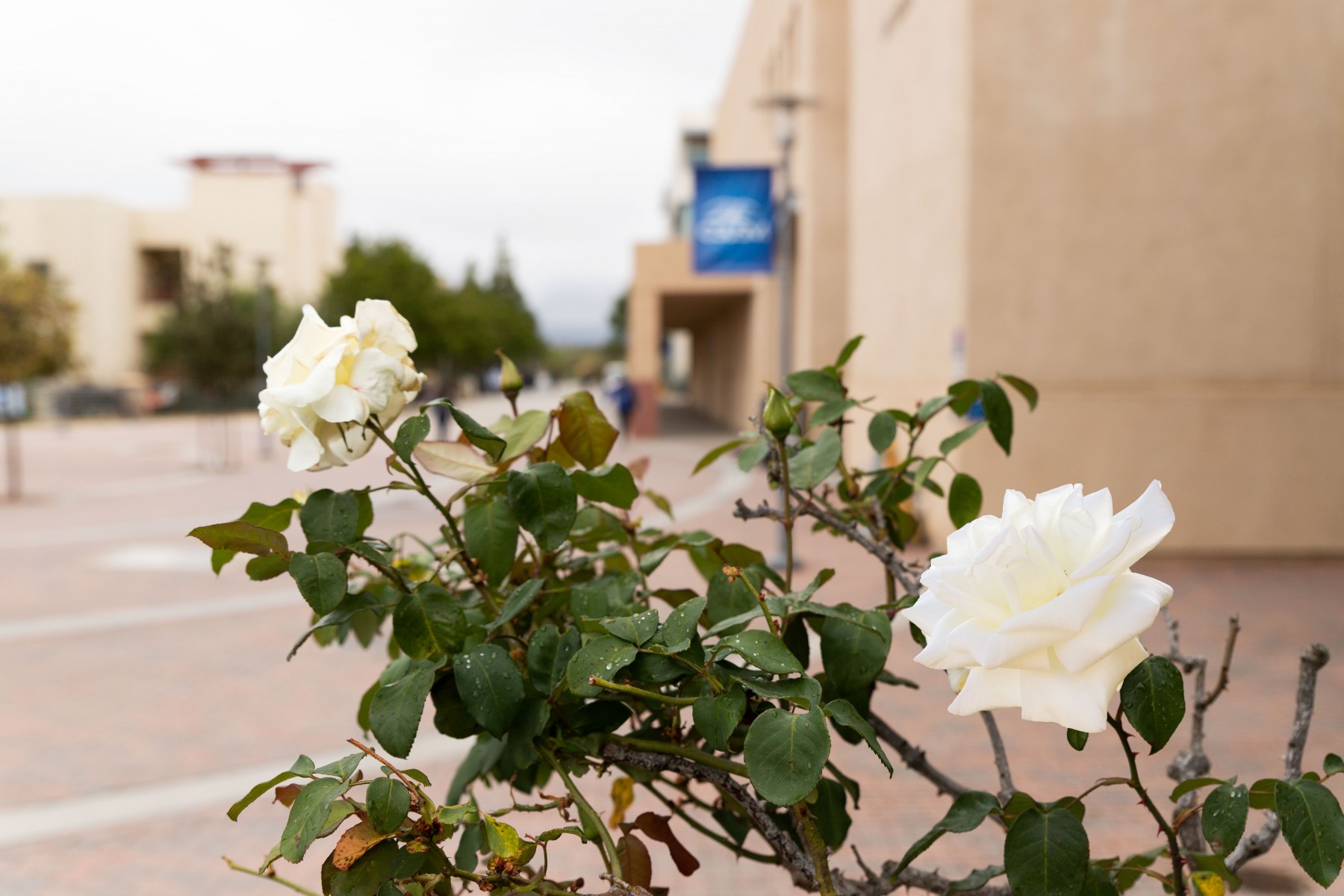 White Rose Memorial
The memorial, designed by a CSUSM student in 2003, will be rededicated on Wednesday, May 1. Photo by Andrew Reed

The CSUSM community will gather in solidarity on Wednesday at the rededication of its White Rose Memorial on Forum Plaza at noon. The interactive memorial honors the brave acts of a committed group of college students who were executed for peacefully resisting the Nazi regime in 1943.

Planning for the ceremony and restoration of the memorial began in the fall. Following the horrific act of violence at Chabad of Poway on Saturday, hundreds are expected to attend in support. The event is open to the public. Visitors are encouraged to arrive early due to an anticipated large crowd and increased security.

“Now more than ever, we each must continue to do our part to ensure that CSUSM is not just a place that values being a diverse and welcoming community, but one that displays our commitment to these values through our actions and priorities,” said President Karen Haynes, who will speak at the event.

The White Rose Memorial was designed by a human development student in 2003. Over time, the metal bucket and ladle used for passersby to water the plant rusted and corroded, and the memorial plaque was nearly illegible.

Last fall, the Jewish Faculty-Staff Association led fundraising efforts on Giving Day to help restore the memorial. Gifts poured in during the 24-hour campaign with an incentivized dollar-for-dollar match by Foundation Board Chair Jack Raymond. Additional support came in the subsequent days as word of the initiative spread, bringing the total raised to more than $5,500.

On Wednesday, in honor of Yom Ha’Shoah (Holocaust Remembrance Day), the campus will rededicate the White Rose Memorial.

The newly renovated elements of the memorial were installed last Friday, including a bronze plaque, a galvanized steel watering drum with a connected ladle, and a steel encasement that surrounds the plant. The space was also redesigned to separate the rose tree from the nearby vegetation. Charcoal black lava rocks now surround the memorial.

The White Rose Memorial was the brainchild of CSUSM student Cynthia Joseph, who was inspired by an art class taught by Andrea Liss in 2003 called “Holocaust art, film, and photography.”

“The water in the barrel of the White Rose symbolically acknowledges yet transforms the reality of violence into a symbol of renewal, a renewal of the body and a renewal of the spirit," Liss said. "The metaphors it contains - caring for life, standing up to racial hatred and honoring acts of bravery - especially now, align with the values of social justice carried forth by the CSUSM community.”

The White Rose Society was a small group of non-Jewish medical students and professors from the University of Munich, who, in 1942 and 1943, denounced the Nazi movement’s enslavement and murder of the Jewish people. Their nonviolent resistance included distributing pamphlets they wrote advocating tolerance and justice. The founders, along with four other members of the White Rose Society, were caught and sentenced to death.

“My heart is full with gratitude that students who took my class, whose families did not experience the Holocaust, expressed deep empathy for those who did,” Liss said. “Student artist Cynthia Joseph’s White Rose Memorial represents caring for life, standing up to racial hatred and honoring acts of bravery – actions that align directly with CSUSM’s mission.”

“I call it an iron vase,” said Joseph in an interview in 2003, referring to the steel case that surrounds the white rose tree. “It symbolizes the resistance to those who would deprive people of their personal freedoms. I invite people to water the plant, to add life.” 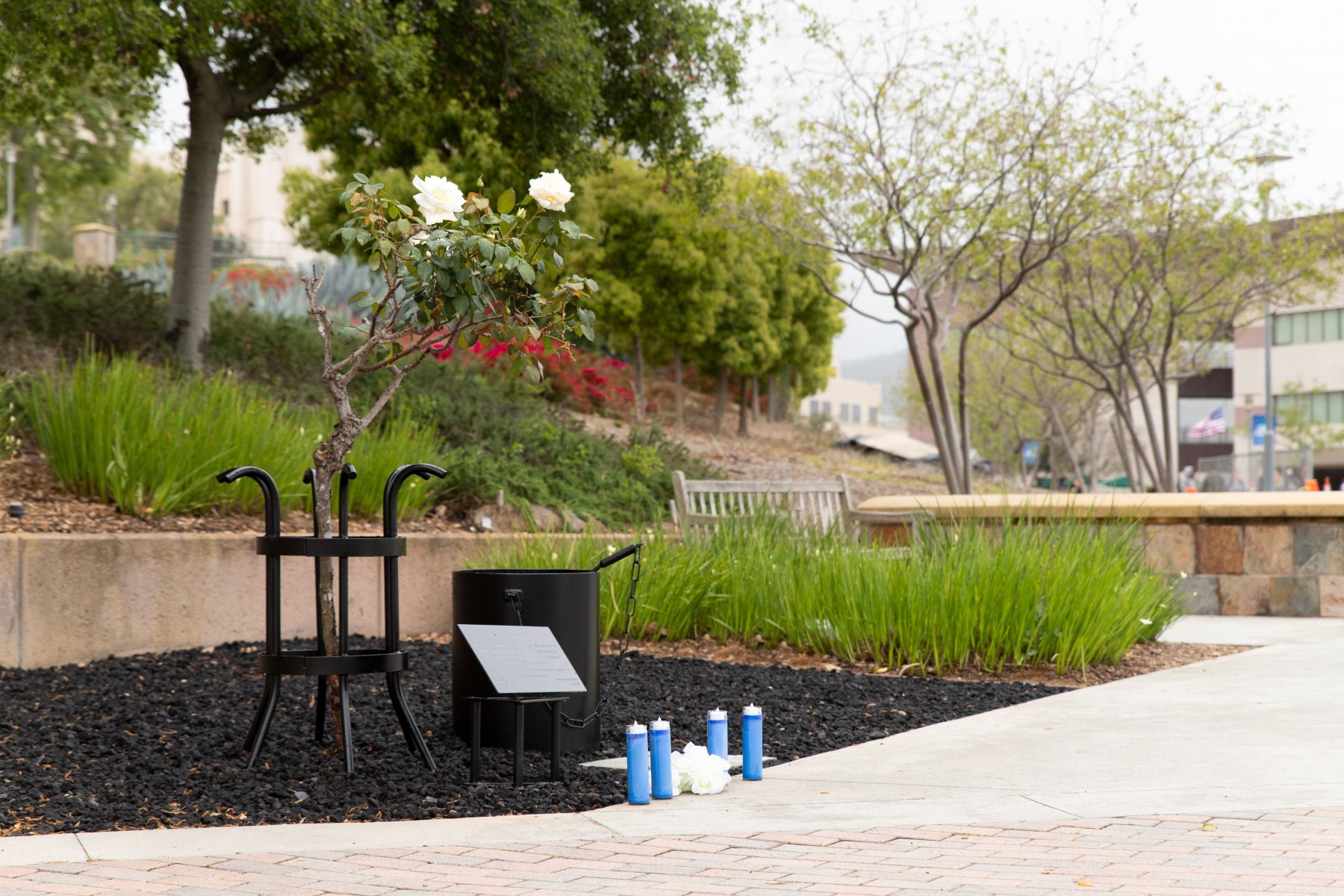 White Rose Memorial
The memorial was restored with the help of funds raised on Giving Day last fall. Photo by Andrew Reed