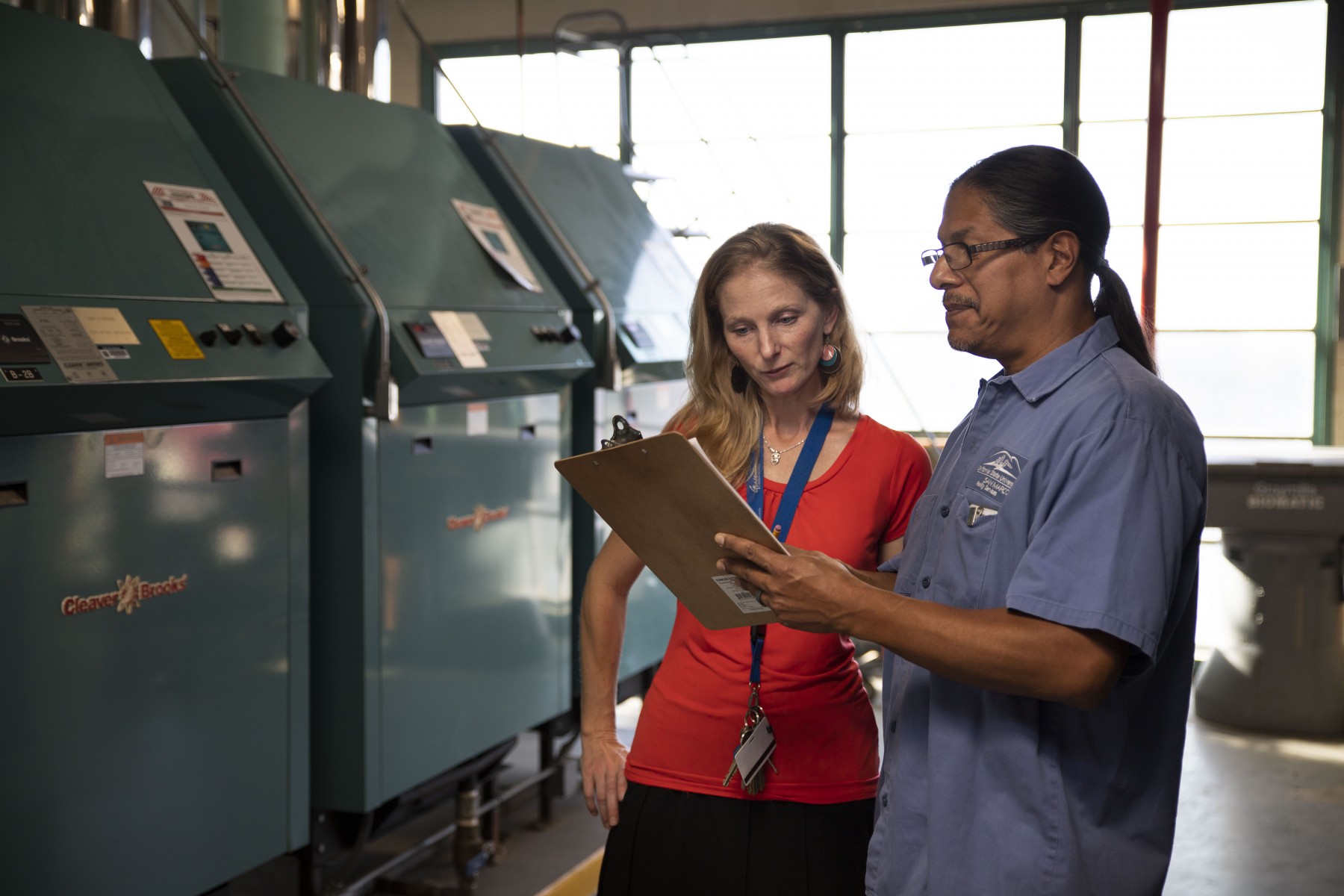 She participated in meetings of the top decision-makers at Cal State San Marcos. She educated colleagues on what the impacts would be if utility companies were forced to shut off the power to campus as a precaution against the threat of wildfire. She helped to draw up a comprehensive campus closure plan.

That CSUSM went through such a process while ultimately avoiding the fate of Northern California, where up to a million people were without electricity at one point, was something of a best-case scenario for Rowell.

“It was a chaotic week, but it was sort of ideal, like get everybody prepared and talking about it,” said Rowell, the director of Energy Management and Utility Services. “Almost like a dry run.”

Rest assured, it won’t be the last time. As the frequency and ferocity of wildfires in California increase because of climate change, so too will the need for utility companies to shut off power proactively to mitigate the risk in endangered areas, and for CSUSM to warn students, faculty and staff of potential shutdowns that may or may not come to pass, depending on the mercy of the wind.

Call it the “new normal” at the university – and for the region.

“Depending on who you ask, we basically don’t have a wildfire season anymore. We can have a catastrophic wildfire any time of the year,” Rowell said. “So it’s what Californians have been dealing with for a while now, just more intense – longer, more devastating wildfires, more difficulty predicting them. And we have to prepare for that intensity.”

In the wake of the two deadliest and most destructive wildfires in state history, the Tubbs fire of 2017 and the Camp fire of 2018, the California Public Utilities Commission directed the three largest energy companies – including San Diego Gas & Electric and Southern California Edison, which services an area that includes CSUSM at Temecula – to adapt their business practices to the state’s current realities. The primary way they now do this is by what’s called a Public Safety Power Shutoff (PSPS), in which utilities turn off electricity to help protect communities during extreme weather events.

The PSPS in Northern California last week affected hundreds of thousands of customers of Pacific Gas & Electric and forced the closures of several universities, including Humboldt State and Sonoma State in the CSU system. In Southern California, the danger posed by Santa Ana winds forced a PSPS that caused Cal State San Bernardino to close Thursday, while Cal State Northridge shut down due to smoke from the Saddleridge fire.

The idea of preemptive power shutoffs already was on Rowell’s radar, and she has been talking with relevant campus parties about the concept for about a year. But the message, and the urgency of it, intensified last week as the first possible PSPS in Southern California began.

“It was really then when people started to see that, ‘Oh, when they said circuits would be shut down, they meant thousands and thousands of people,’ and I’m like, ‘Right!’ ” Rowell said. “What happened in Northern California was the reality check that is hard to express to people on the front end.”

In a PSPS, utility companies attempt to provide advance notice of at least 24 hours. Outages are authorized to last up to five days and can be ordered up to 15 times a year.

Rowell stressed that because these outages can drag on for days at a time as opposed to mere hours, they could be a trying experience beyond most people’s frame of reference. And they would affect everybody on campus, depending on whether the PSPS is in San Marcos or Temecula. Just because the building you work or take classes in features a backup generator, for example, does not mean you can stay on the premises. That generator exists to give people time to exit the building safely.

Rowell’s No. 1 piece of advice for the next PSPS, which likely will be coming sooner than later, is to formulate a plan – any plan.

“If you just talk about this with your family and do nothing else, you’re better off than if you don’t,” she said. “Don’t let your gas tank get below half a tank, which is probably good general practice in California anyway with the additional threat of earthquakes. Keep some cash around for a situation where businesses are operating on a cash-only basis. Have a go bag that has your important documents, first aid kit, water, protein bars.

“And check on your friends and family. The assumption is that if you have a place to go, everybody does, but that’s not necessarily the case. There’s a lot of little things you can do to make going through something like this better.”