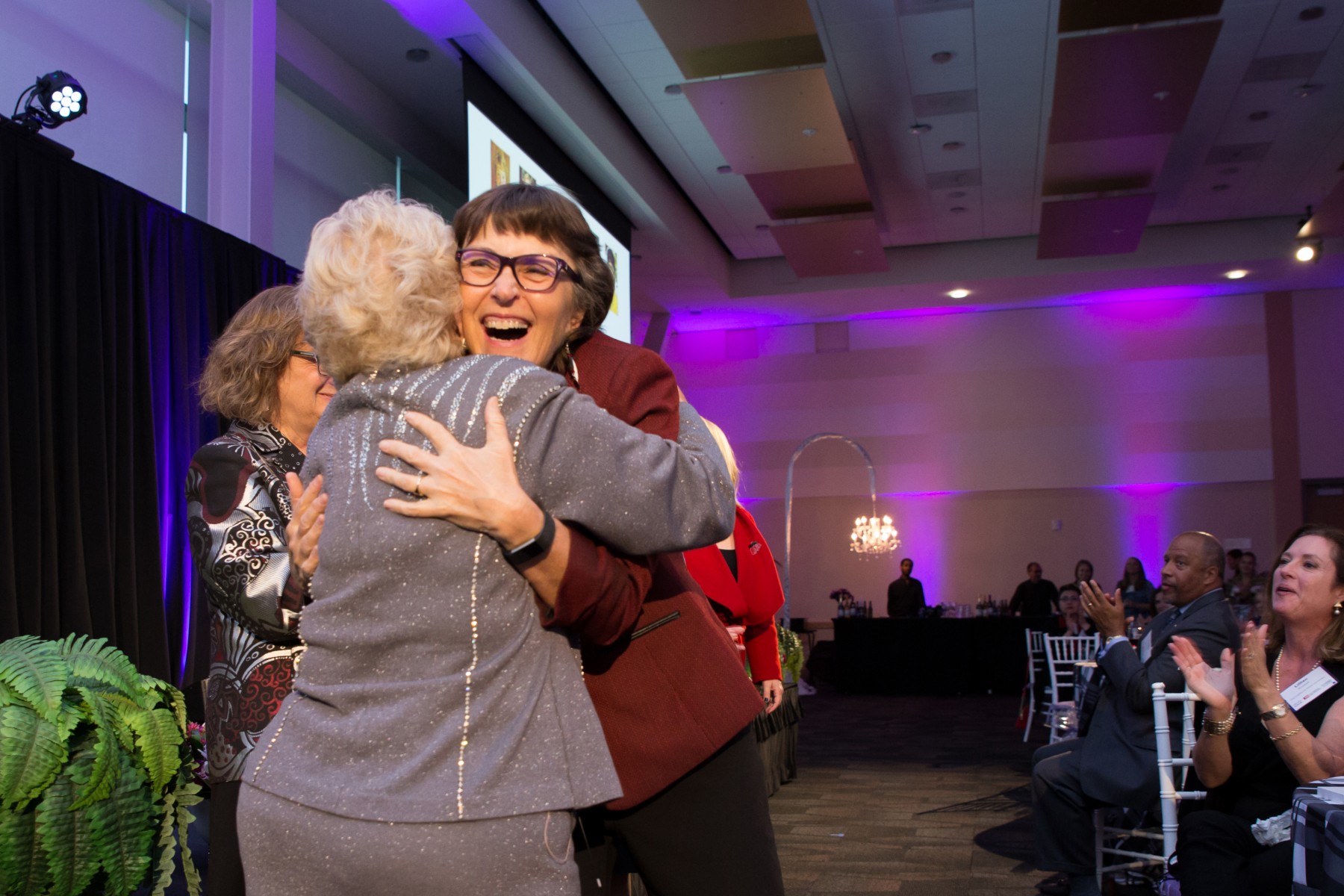 For the first time in history, more than half of the 23 California State University campuses are being led by women presidents, a statistic that is nearly double the national average. To celebrate the milestone, nine of the 12 CSU women presidents, along with Chancellor Timothy White, gathered at CSUSM for a special reception with more than 200 women leaders in higher education at the annual ACE Women’s Network Forum on Thursday, Oct. 18.

“We have smashed the national average and set a new high,” said CSU Trustee Wenda Fong. “Tonight, we celebrate that change. Because California State University is leading the nation, and leading academia.”

Marking the occasion, a special video premiered in tribute to President Haynes’ trailblazing leadership. Titled “Because of Her,” the video features an essay read by Associated Students Inc. President Savana Doudar.

One by one, the women presidents were welcomed to the front, and a celebratory line of hugs and high-fives was formed.

Unable to attend were:

The achievement of reaching a women majority among CSU presidents was not by accident. In the last year alone, the CSU Board of Trustees has approved and appointed five women to fill the top leadership roles at Channel Islands, Chico, San Jose, Sonoma State and Stanislaus.

“My goal as chancellor has always been to recruit truly remarkable talent to lead our 23 campuses,” said Chancellor White. “My charge to presidential search committees has been consistent and clear: cast a wide net; develop a deep pool; seek out candidates who reflect the character and color of our communities, of our student bodies; find us great leaders. Tonight, you see the result of that effort.”

“We’re not done yet,” said President Haynes, who pointed to ACE’s Moving the Needle goal to have half of all higher education presidencies nationwide be held by women by 2030. “The CSU is leading the way; showing it can be done – with leadership, with commitment, with persistence.”

Throughout her career, Haynes—named one of the most influential social workers in the nation—has been a catalyst for change, and she remains a powerful advocate for women. She knows that while it’s still an uphill battle for a woman to be judged as both a good woman and a good leader, she is encouraged that progress is being made.

“Many are sensing that nationally we are on the cusp of monumental change as more women are stepping into positions of leadership more readily and unapologetically than ever before,” said Haynes. “As we see and hear from more women standing up to challenge the status quo – from Silicon Valley to Capitol Hill, from classrooms to boardrooms. As a lot of news coverage focuses on a blue wave, or a red wave, I am watching the ‘Pink Wave.’”