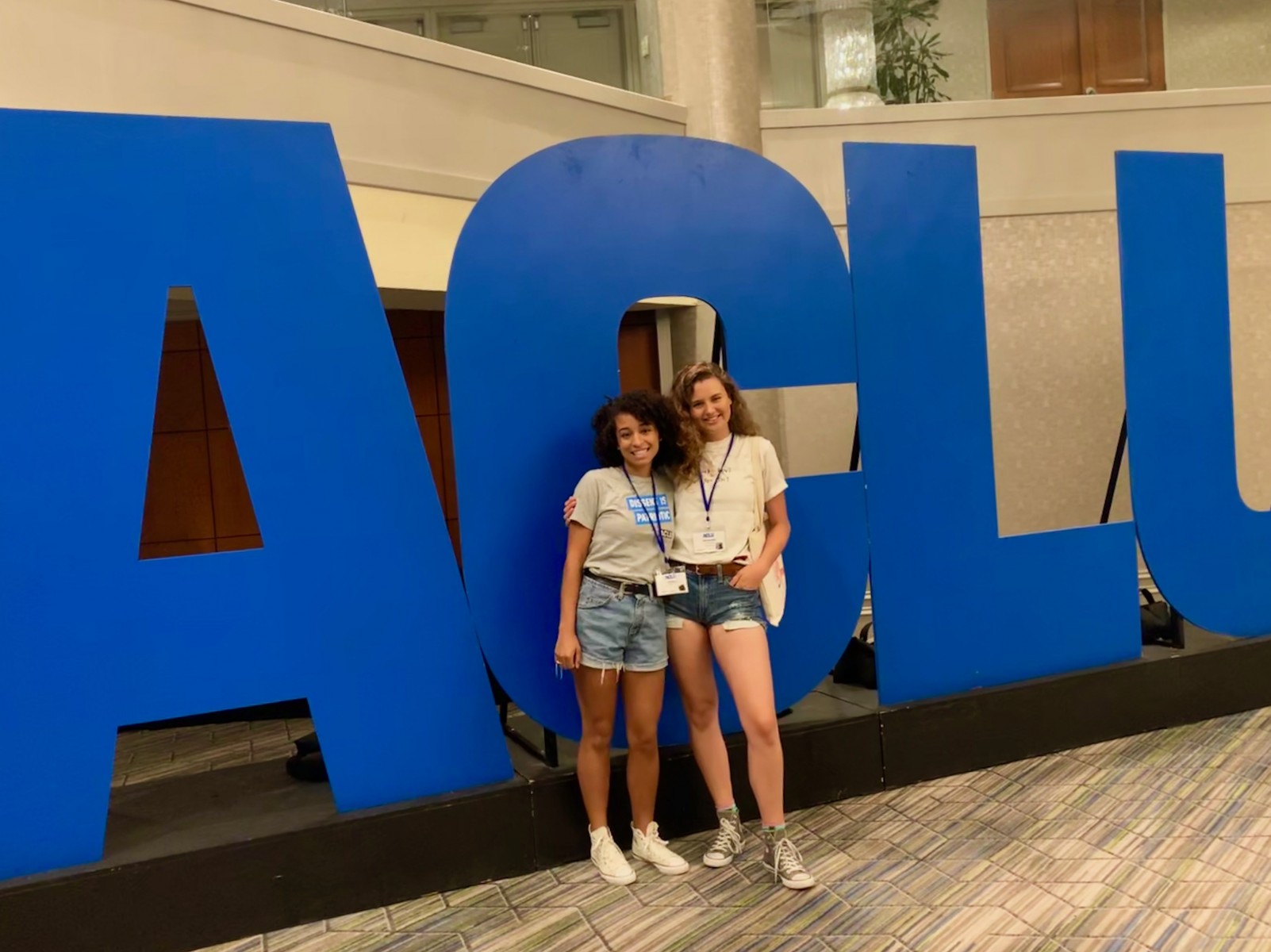 CSUSM students Janelle Esprit (left) and Samantha Caracciolo, who both work in the Office of Inclusive Excellence, participated in the ACLU Advanced Advocacy Institute in Washington, D.C., over the summer.

But the opportunity exceeded all expectations.

The program had the insightful panel discussions and workshops that Samantha and Janelle expected. But it also provided interactive opportunities and a chance to network with students from across the country who share their passion for social justice.

“The people who I met there really made the biggest impact on me,” said Janelle, a speech-language pathology major who’s on track to graduate in 2021. “I learned a lot from the professionals who were there, and it gave me a lot of hope to see women of color who are lawyers and things like that. But my favorite part was interacting with students who have similar values.”

Samantha echoed those sentiments, noting how impactful it was to meet and hear from other students who feel a calling to social justice issues. In one of the first activities, participants shared with the group something they have done that made them want to attend the program. While the examples varied, they shared a common thread: It wasn’t something they wanted to do – it was something they had to do.

“I just thought, ‘Exactly,’ ” said Samantha, a women’s studies major who will graduate in May. “It’s in your gut that if you don't do something, who else is going to? And it was cool to realize, ‘Actually, there are 400 other people here who are like me who will.’ ”

The Advanced Advocacy Program is designed for students ages 18-24 to encourage lifelong engagement in grassroots organizing, policy development and legal advocacy. The week-long program was held in Washington, D.C., from July 28-Aug. 2. Participants had a robust schedule from 9 a.m. to 8 p.m. each day that included lectures, seminars, keynote speakers and group discussions.

Janelle and Samantha nearly didn’t attend because of the program’s considerable cost of $2,300 per person. They each received $1,500 scholarships from the program, but the additional $800, not to mention travel costs, still presented a challenge. Then they learned that CSUSM’s Office of Inclusive Excellence, where both work as student associates, would cover the remaining $800 for each of them to attend.

“As a college student, it’s hard financially,” Janelle said. “So we were really grateful when the Office of Inclusive Excellence helped.”

Janelle and Samantha were among 400 students from across the country who participated in the program. It was inspiring for both of them to hear from and see so many students who share their passion for social activism. And it was equally inspiring to see the ACLU count on students for help.

“Seeing an organization like the ACLU that is so impressive and has done really good work look to students for answers was just cool,” Samantha said.

Janelle and Samantha are continuing to stay connected to the ACLU, including participating in a training session on digital privacy and advocacy this month.

While Janelle just began her junior year, she anticipates attending graduate school. Her plan is to become a certified speech-language pathologist, but she isn’t ruling out work involving public policy.

With graduation on the horizon, Samantha is looking toward law school next fall. Being on the East Coast for the Advanced Advocacy Program afforded her the opportunity to check out law schools (NYU tops her list), and she is considering specializing in constitutional law or immigration law.

Regardless of their future path, Janelle and Samantha know the lessons learned at the Advanced Advocacy Program will continue to guide them.

“Just the act of becoming educated about issues is so powerful to me, because you can't fix something or make change unless you recognize that it’s needed,” Janelle said. “That’s what was so powerful about being able to talk to all these really passionate people.”