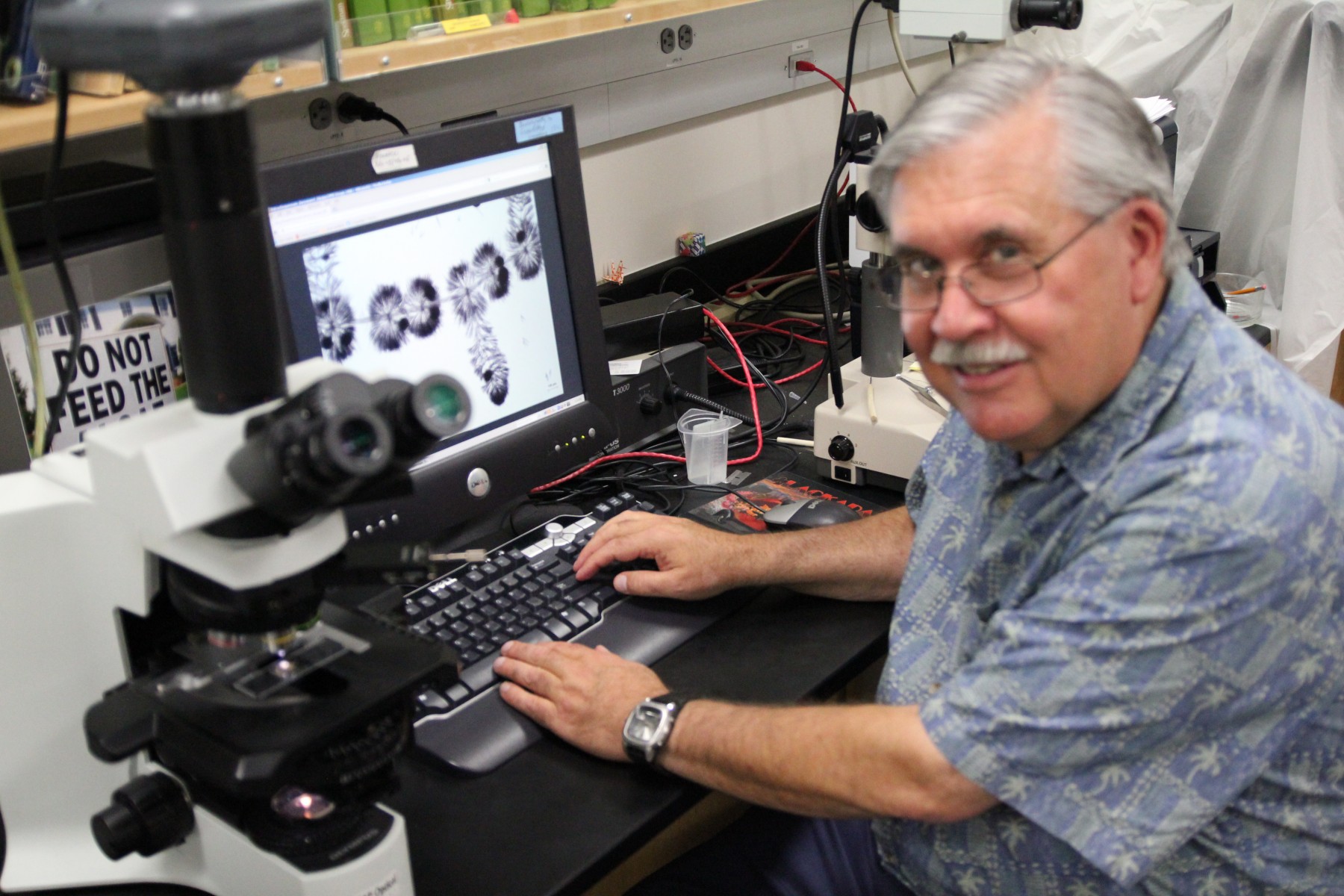 Rare is the provost who puts a relatively young university on the path toward adding more than a dozen new academic programs.

Rare is the faculty member who’s such an expert in his field that he has something named after him.

And rarest of all is the person who combines both into one extraordinary career, with a generous dose of kindness and collegiality added to the mix for good measure.

Several dozen friends and colleagues packed into the Faculty Center at Kellogg Library on Thursday to celebrate the life and work of Robert Sheath, a retired Cal State San Marcos provost and biology professor who died late last year after a brief illness. Also in attendance were Sheath’s widow, Mary, her sister and a close friend and former student who flew in from Connecticut.

At the declaration of President Ellen Neufeldt, the CSUSM flag in Craven Circle flew at half-staff on Thursday in Sheath's memory.

“I want to offer my sincerest condolences on behalf of the university not only to his family but to all of us as we celebrate him today and the legacy that he leaves here,” Neufeldt said during the ceremony. “One of the things I’ve heard over and over again is what special people have been a part of this university and the building blocks that we stand on. And he was one of those giants.”

Sheath worked at CSUSM for 18 years, arriving at the university as a provost in 2001 and retiring as a biology professor after the spring 2018 semester. During his five-year tenure as provost, he played a significant role in shaping the vision for Academic Affairs. He oversaw the addition of three majors – biochemistry, criminology and justice studies, and kinesiology – and laid the groundwork for four additional majors that were added shortly after he stepped down as provost, as well as the founding of what has become the College of Education, Health and Human Services.

“His main mandate when he was hired was to build academic programs and do academic master planning, and he did a masterful job of it,” said Bud Morris, a retired communication professor who was chair of the Academic Senate when Sheath was hired. “He spearheaded all sorts of initiatives that were devoted to figuring out what we should grow, when we should grow it and in what order we should grow things.

“I’m going to miss Bob, but every time I look around campus, I see the work that he did, and it’s really reassuring.”

More than his work as an administrator, Sheath built his professional reputation as an internationally renowned phycologist, the name for a scientist who specializes in the study of algae. He co-authored four textbooks, and 153 of his manuscripts were published in peer-reviewed journals, proceedings and books.

One speaker at the ceremony observed that Sheath could have continued to climb the academic ladder and become a university president after his stint as provost ended in 2006. Instead, he returned to his true passion as a scientist and a teacher of future scientists.

Sharon Hamill, chair of the Academic Senate, speaks during a celebration of life for Robert Sheath last Thursday. Photos by Andrew Reed
Sheath's widow, Mary (center), listens to a speaker during the ceremony Thursday.
A former colleague signs a guestbook dedicated to the life and work of Sheath.
The CSUSM flag flew at half-staff on Thursday in Sheath's memory.

“There’s no guarantee that a retreating administrator is going to contribute something new and needed in a department,” said Bill Kristan, chair of the biology department. “We were very lucky that when Bob retreated to biology, he brought with him an expertise in biogeography and aquatic ecology that we didn’t already have.”

Kristan said Sheath received research grants totaling almost $8 million during his career, and one of the most notable established the California Primary Algae Laboratory, the only lab in the state to collect and catalog freshwater algae samples. Sheath and his colleague, Rosalina Hristova, a senior lab scientist, pioneered the use of algae as bioindicators of water quality in California.

In 2014, the Sheathia, a newly identified genus of algae, was named after him, recognizing his extensive research of many of the species in the genus and other freshwater red algae.

“Bob knew so much about these inconspicuous, easily overlooked organisms, he was able to find new species in places that people have occupied for centuries or millennia,” said Kristan, adding that the algae lab has found and described at least seven new species of algae in the most populous state in America.

Biology professor Betsy Read told a story about being a postdoctoral fellow in microbiology at Ohio State University in the early 1990s and a book called “Biology of the Red Algae” being her bible. The book was co-edited by Robert G. Sheath. It wasn’t until many years later, Read said, while sitting in Sheath’s lab, that she realized her dear CSUSM colleague was the same person who had helped produce that influential tome.

“Bob knew thousands of freshwater algae, and he knew them intimately from the inside out,” Read said. “His burning curiosity, his enthusiasm, and uncompromising desire to describe algae as a part of the natural world serve as a constant reminder of what originally drew so many of us to the field of science. I’ve known a lot of scientists, but few who took as much pleasure in their work as Bob.”

During the ceremony, a large TV screen displayed a slideshow of photos of Sheath from his life and career. On a table in front of the TV was arranged a collection of memorabilia and archival material, including his lab coat, plaques, textbooks, journals, hockey paraphernalia (a native of Canada, he received his bachelor’s degree and doctorate from the University of Toronto) and a flyer from his 2002 Arts & Lectures discussion “The Scum of the Earth: The Good, the Bad and the Ugly of the Algae.” A Canadian flag was draped over the lectern from which people spoke.

Speakers emphasized that Sheath was much more than the sum of his work. Read wondered whether he was more proud of his algae database or the 90,000 pieces of music he collected on a hard drive. Math professor David Barsky recalled frequent games of “name that tune” in Sheath’s car en route to their lunch meetings at Restaurant Row in San Marcos. Sheath was also a diehard fan of the novels of J.R.R. Tolkien and the popular movies based on them; referring to the Tolkien wizard, Read called Sheath “Gandalf-like” in his wise mentoring of his CSUSM colleagues.

“Bob ended every email with ‘cheers,’ ” Barsky said. “And the related words ‘cheer’ and ‘cheery’ are perhaps the best words to describe the atmosphere that Bob created for us. He was an optimist who cheered us on and helped us to build more than we ever thought possible.” 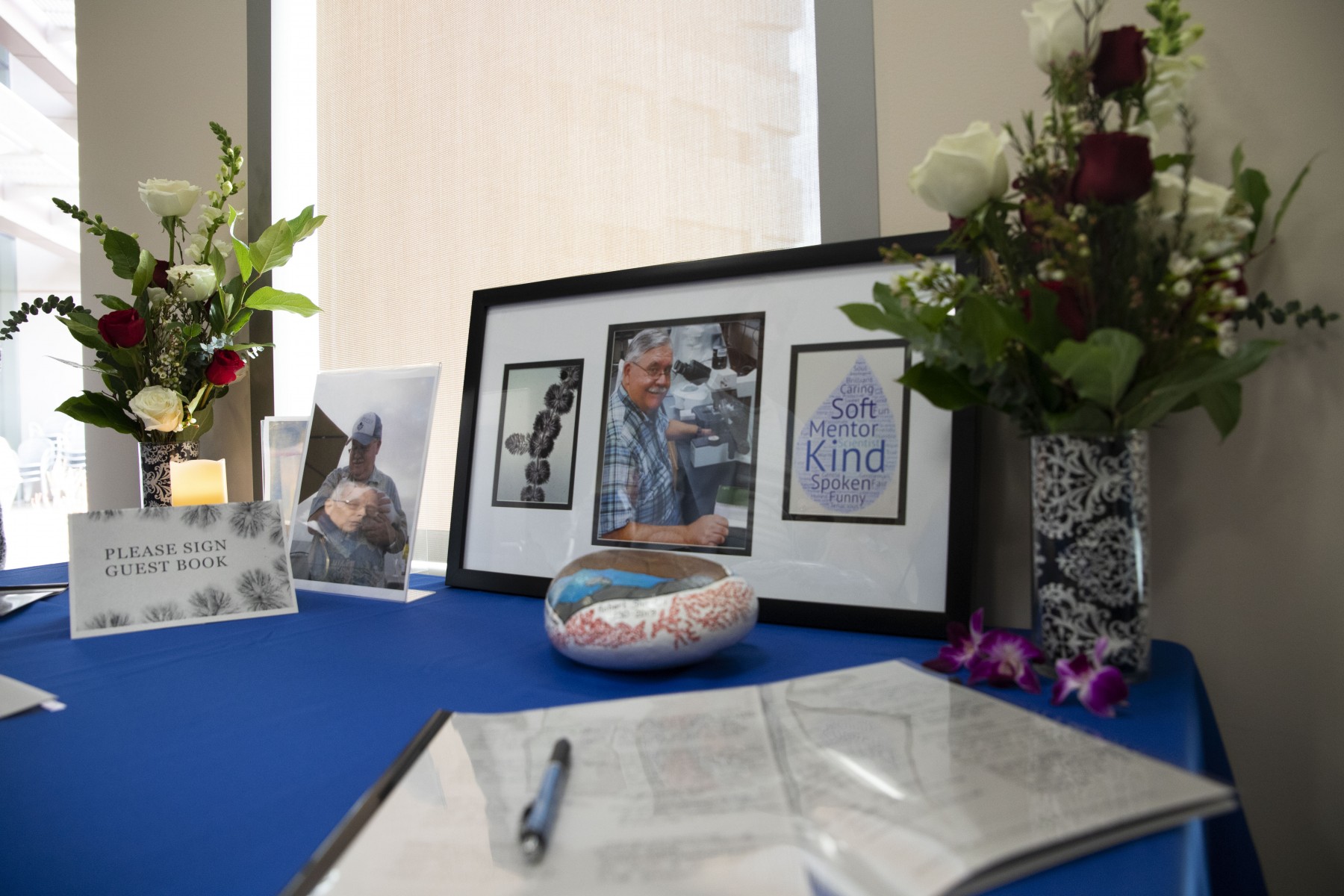 Bob Sheath was an internationally renowned phycologist who had a genus of algae named after him. Photo by Andrew Reed