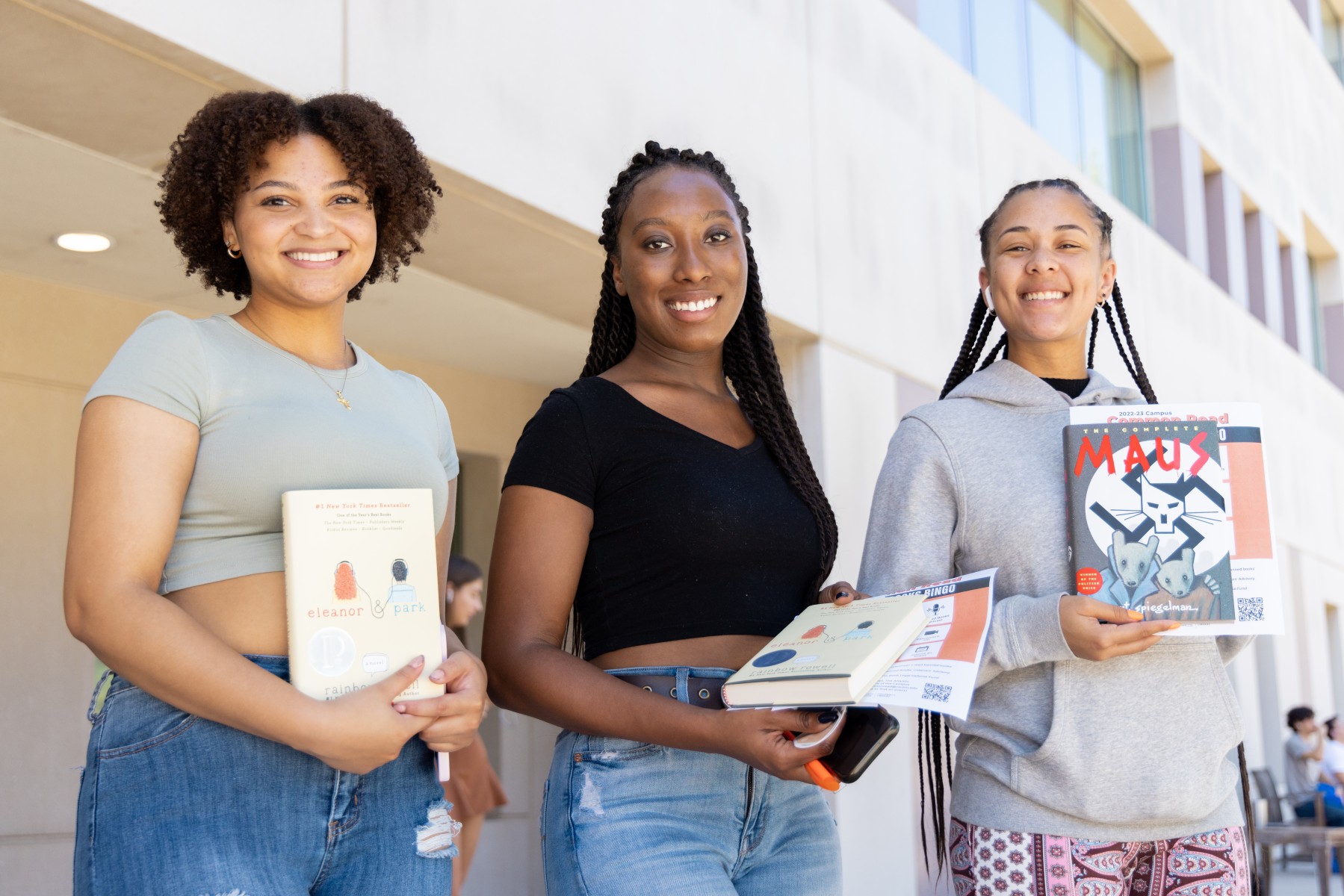 Students hold some of the banned books that are being given out this year as part of the Campus Common Read. Photo by Alicia Lores

Efforts to ban books deemed controversial in some way are essentially as old as literature itself.

Authors whose work has been banned across history include such literary icons as Mark Twain, Harriet Beecher Stowe and William Shakespeare, and titles that have been banned include many of the universally acclaimed classics of the 20th century.

The practice of banning and challenging books, however, is accelerating at disturbing speed. According to a recent report from the American Library Association (ALA), there have been attempts to ban or restrict access to 1,651 different titles in 2022. That’s the highest number of complaints since the organization began tracking book challenges more than 20 years ago; the previous high occurred just last year.

The Cal State San Marcos library has recognized the national Banned Books Week (held every fall) for years. But with the trend of book challenges increasing around the country, the library decided to heighten its commitment to ensuring that students have access to material that makes them think about deeper issues, even if some find them objectionable.

What traditionally was a single book selected for the annual Campus Common Read has become, for this year, five titles under the overarching theme of banned books.

“We chose this theme because it is so timely,” said Allison Carr, CSUSM’s academic transitions librarian. “Every day, it seems, there’s a new story about some librarian being harassed and they quit their job because they can't take it. It's not an exaggeration to say that libraries are under attack. They have been for a long time. But people going into school board meetings and city council meetings and insisting that this one book is going to be the downfall of your child, your community, is happening a lot more than anybody realizes.”

This year’s Campus Common Read campaign kicked off Sept. 8 with a book giveaway, and since then there have been five additional handout sessions of the five selections. Students can pick up a free book at any of the giveaway events. The next opportunity is Thursday, Oct. 27 during the Campus Common Read book club, a discussion about censorship and banned books taking place in the Kellogg Library Reading Room (Room 5400) at noon.

Carr and the rest of the campuswide Common Read planning group intentionally chose the five books to encompass a variety of genres and reasons for being banned or challenged, either now or in the past. The books are:

According to the ALA website, a challenge is an attempt to remove or restrict materials based on the objections of a person or group, whereas a banning is the removal of those materials.

“We wanted to show all the different reasons why books get banned and do it across genres, too,” Carr said. “Who would think that a nonfiction book would be banned? When I first heard about that, it was it striking to me. And we were surprised that ‘The Snowy Day’ had been challenged.

“Sometimes it's not wanting to tell the stories of historically marginalized groups. Some people don't want their worldview to be challenged, and when it is, there's a lot of moral panic.”

Through the first two months of the campaign, the library has handed out almost 600 books (a donor assisted in purchasing them). Carr and her team soon will begin more outreach to faculty in hopes of increasing incorporation of the five titles into course curricula this spring as a means of facilitating more conversations about vital topics surrounding the books.

Carr said she believes that the Common Read will retain the format of multiple books under a larger theme for at least the next few years, and that banned books could return as the theme because it has proven popular and there are so many to choose from.