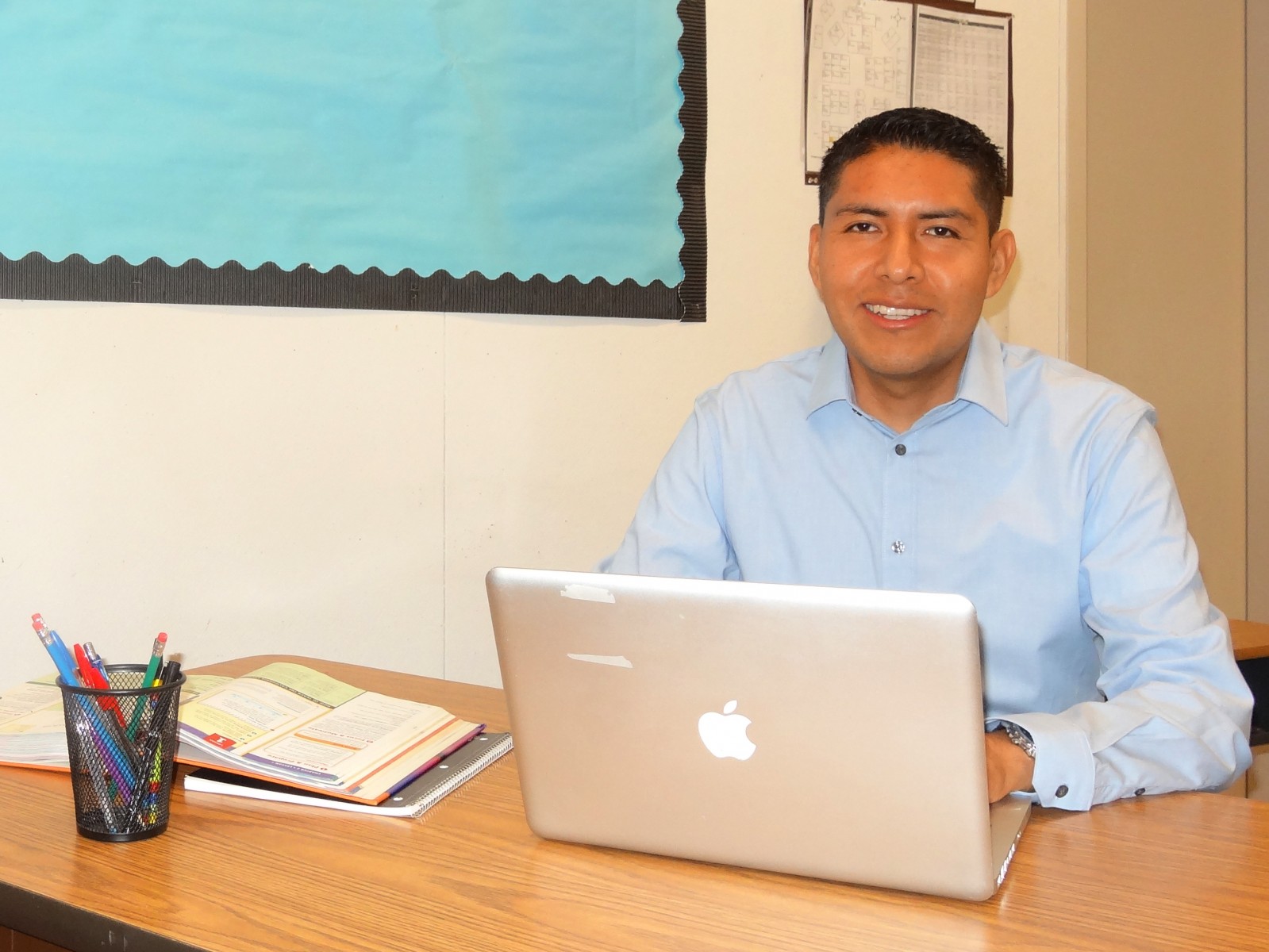 Jose Melo, who earned a bachelor's degree, teaching credential and master's from CSUSM, is a decorated teacher at Valley Center Middle School.

In late August, one week before the start of the school year, Jose Melo was invited to an impromptu, one-on-one Zoom meeting by the principal of Valley Center Middle School, where Melo has taught for the last eight years.

That’s unusual, Melo thought. Did I do something wrong?

Nervously, he joined the call, having no idea what to expect. The principal began talking about the dual language department that Melo teaches for, about further planning for the upcoming year. Then he threw Melo another curveball.

“Well, Jose,” the principal said, “there are some people who want to join this meeting.”

Into the Zoom windows popped the San Diego County superintendent of schools and two other officials from the county office. Melo quickly went from confused to elated when they told him that he had been named one of the five county Teachers of the Year for the elementary through high school levels.

“It was all just a big surprise to me,” Melo said. “It was a great way to start the school year.”

Melo, a Cal State San Marcos graduate who teaches dual language social studies and English language development (ELD) at Valley Center Middle School, and his fellow honorees were chosen from among 40 educators selected by their districts for their commitment to students, teaching and lifelong learning. The selection panel was composed of former Teachers of the Year, school and county office of education administrators, and a parent representative.

“Being a teacher is really a calling,” said Melo, 29. “I feel very fortunate to work with the students I work with every day. My students empower me. When you’re feeling a little down as a teacher, just listening to a student greet you or being excited walking into the classroom gives you the motivation, the energy to keep going.”

Valley Center Middle School is part of the Valley Center-Pauma Unified School District, in which more than half of the student population is Latino. Because of that dynamic, when Melo teaches social studies, the lessons are delivered in English and Spanish, with the goal of students becoming bilingual and biliterate. He doubles as an instructor in the ELD program, which is designed for students whose primary language is not English, to help them learn the four domains of language: reading, writing, listening and speaking.

The role is fitting for Melo. Born in Mexico, he moved with his family to Fallbrook when he was 6 years old. Like many of his current students, he grew up in a household where Spanish was the first language. Like many of his students, he participated in the ELD program – in his case, it started in kindergarten.

“I can totally relate to those students and the challenges that they encounter in developing their English skills,” Melo said. “That’s one of the reasons why I really enjoy teaching ELD. And also working with the parents, I think that part is instrumental – informing them about their child’s education and how they can better support their kids as students.”

Melo’s parents both worked in agriculture in Fallbrook and neighboring Bonsall, and as a boy, he would spend many summer days helping them pick avocados and other fruits and vegetables in the fields. In school, he took advantage of the federal Migrant Education Program, which provides supplementary educational and support services to identified migrant students.

It was the combination of those two experiences – working with his family in the fields, while receiving empowerment from understanding teachers in school – that enabled Melo to begin to see a path forward through education, and even a potential career as an educator himself.

Melo applied to and enrolled at Cal State San Marcos with the aid of the College Assistance Migrant Program (CAMP), essentially the higher ed version of the services that he had benefited from in elementary through high school. He also found inspiration through California Mini-Corps, a statewide program that recruits college students with migrant backgrounds to work as tutors for migrant students in public schools.

After becoming the first person in his family to graduate from college – he earned a bachelor’s in liberal studies in 2012 – Melo didn’t stop there. Seeking to fulfill his goal of pursuing teaching, he stayed at CSUSM to complete a multiple subject credential with a focus on middle school education.

His mentor that year was School of Education professor Ana Hernandez, who remains close to Melo and frequently invites him back to campus to speak to her students. It was Hernandez, in fact, who wrote the letter nominating him for the Teacher of the Year award.

“I have seen Jose in many educational contexts – as a learner, teacher, and leader in education,” Hernandez said. “In every occasion, he has easily connected with the audience through engaging activities that allow creativity and voice in the process of learning. He is seen as a role model of equitable practices, reaching out to every linguistically and culturally diverse learner.”

While he was in the credential program, Melo participated in the San Marcos Writing Project run by education professor Laurie Stowell. He found that to be doubly beneficial in that he was awakened to the power of writing to encourage students to tell their stories, and also awakened – by Stowell – to the possibility of graduate school.

So two years after he started teaching in Valley Center, Melo returned to CSUSM to pursue a master’s in general education, taking night classes to fit around his day job. In the master’s program, he became more attuned to the social justice aspect of his profession.

“It makes you see things through a different lens,” he said. “How can we better support minority students, students who are learning English as a second language, or American Indian students? In this district, we serve students from five different reservations, students who unfortunately have a very challenging history in terms of trusting the school system and trusting the teacher. So it’s crucial that I support those students and build connections with the families.”

Melo is one of five children in his family, and it appears that he’s the one who’s paving the way for a better future. Neither of his two older siblings had the opportunity to attend college, but his younger sister followed him to CSUSM – graduating with a degree in accounting in 2018 – and his younger brother is a sophomore at the university. At Melo’s urging, he’s leaning toward becoming a teacher as well.

“CSUSM is like a tradition in my family now,” Melo said. “I tell my students that it only takes one person in your family to take that step. It’s going to be challenging, but that one person will open the door and allow the rest to follow. The power of education is an amazing thing.”