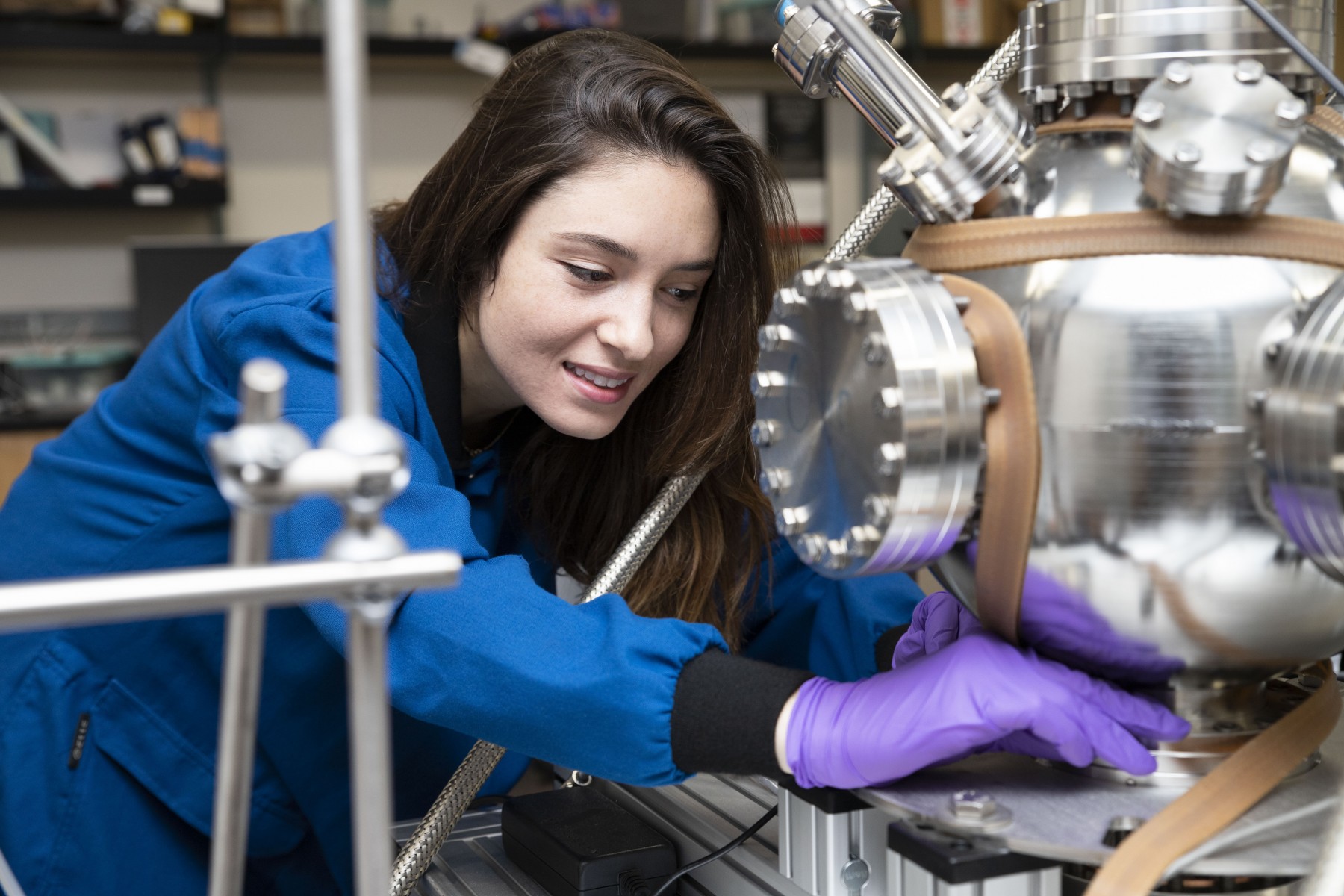 Lauren had only recently started taking physics courses and was touring some of the labs when her professor, Stephen Tsui, had to step away. He told Lauren to look around while he attended to another matter. Lauren knocked on the first door she saw, which happened to be Dominguez’s lab. She poked her head in and asked what he did.

Dominguez’s research interests include astrophysics, also one of Lauren’s passions, so he invited her in and provided an impromptu overview of his work.

“I was so happy,” Lauren said. “I asked him if I could start working in his lab. I was probably only a month into my first physics class.”

Lauren’s persistence paid off. She not only earned a place working in Dominguez’s lab, but had the opportunity to present her research earlier this month in Seattle at the American Astronomical Society’s annual meeting.

“Lauren joined the lab in late spring of 2018 and as a junior has already had an impact on the work we do,” Dominguez said. “She is developing protocols for experiments aimed at understanding the behavior of water in astrophysical environments. This is important work, and she is doing what a first-year graduate student at an R1 institution would be doing.

“It’s a pleasure to work with her, and I’m lucky to have her as part of my research group here at CSUSM.” 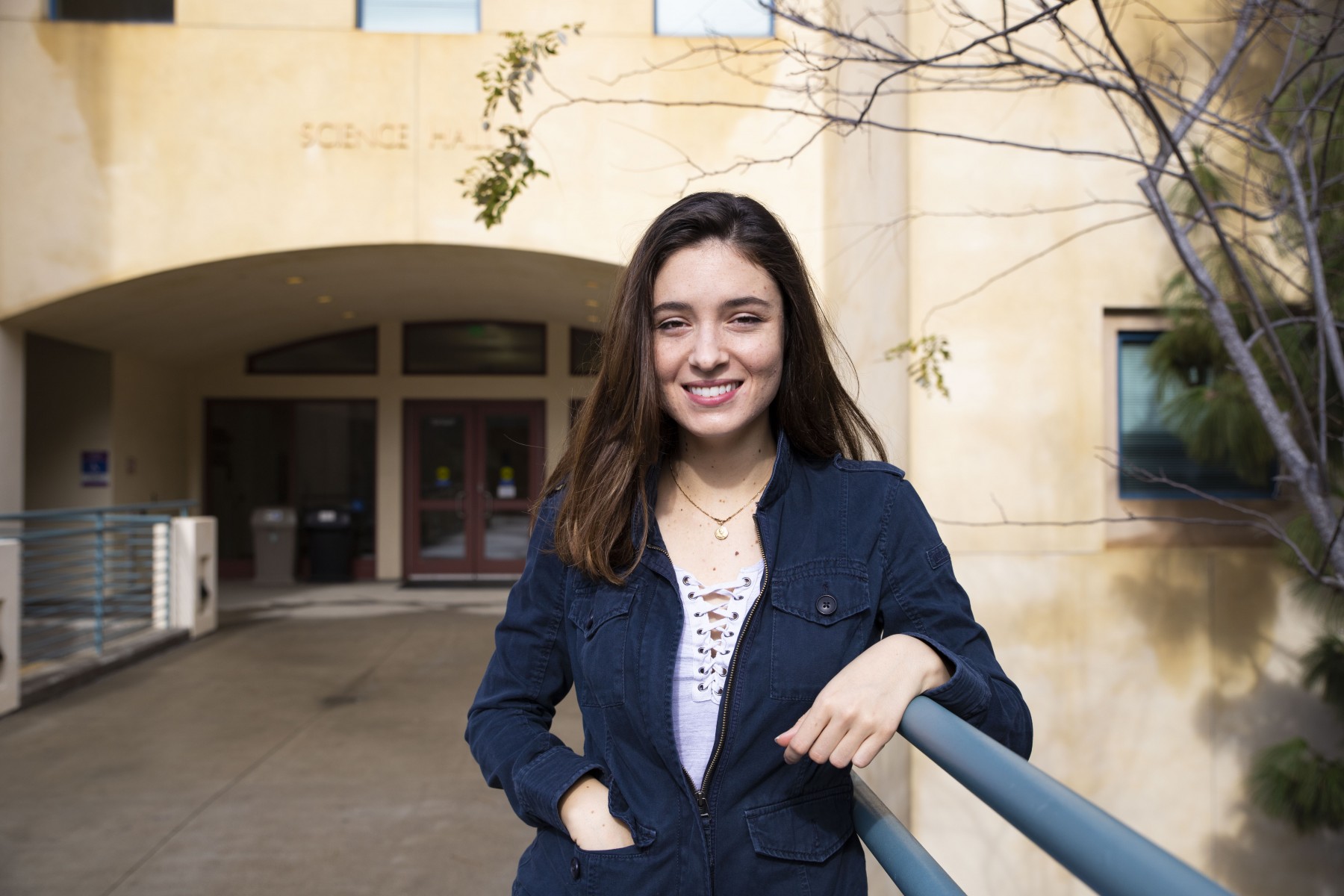 Among her many accomplishments, Lauren Tafla has served as president of the Society of Physics Students. Photo by Andrew Reed

It’s a far different path than the one Lauren planned when she enrolled at CSUSM.

Lauren wanted to study something she considered practical, so she chose accounting, the same major her mother pursued. But from the moment she started taking accounting classes, she realized it was a poor fit. She began reading some of the philosophy books that her mother had at home and became interested in philosophical theories about the universe. It wasn’t long before she changed her major to applied physics.

Lauren completed Physics 201 in the months following her initial meeting with Dominguez and returned to his lab after taking Physics 202. Dominguez suggested that she attend his weekly student lab meetings and read up on topics such as geochemistry, isotopes and vacuum systems.

“It was a little intimidating at first,” she said. “Everyone in the lab tries to be really supportive, but they also have a lot of work to do. I just had the mindset of ‘I can do it. I can figure it out.’ ”

When students used unfamiliar terms during the meetings, Lauren would write them down and look them up later. Her efforts led to her being selected for the College of Science and Mathematics’ Summer Scholars Program, a 10-week program in which students work closely with a faculty mentor to gain hands-on experience. In Lauren’s case, that meant an opportunity to further her research in Dominguez’s lab. When the Summer Scholars Program ended, Dominguez offered Lauren a paid position in the lab, which she happily accepted.

Last fall, Dominguez suggested that they present their research at the 233rd meeting of the American Astronomical Society. Lauren jumped at the opportunity. She was one of just a handful of undergraduate students in attendance.

“Everyone was really inclusive,” said Lauren, who will graduate in May 2020 and plans to pursue her Ph.D. in physics. “It was a really supportive environment. Being able to represent Cal State San Marcos at the conference gave me a lot of collaboration opportunities.”