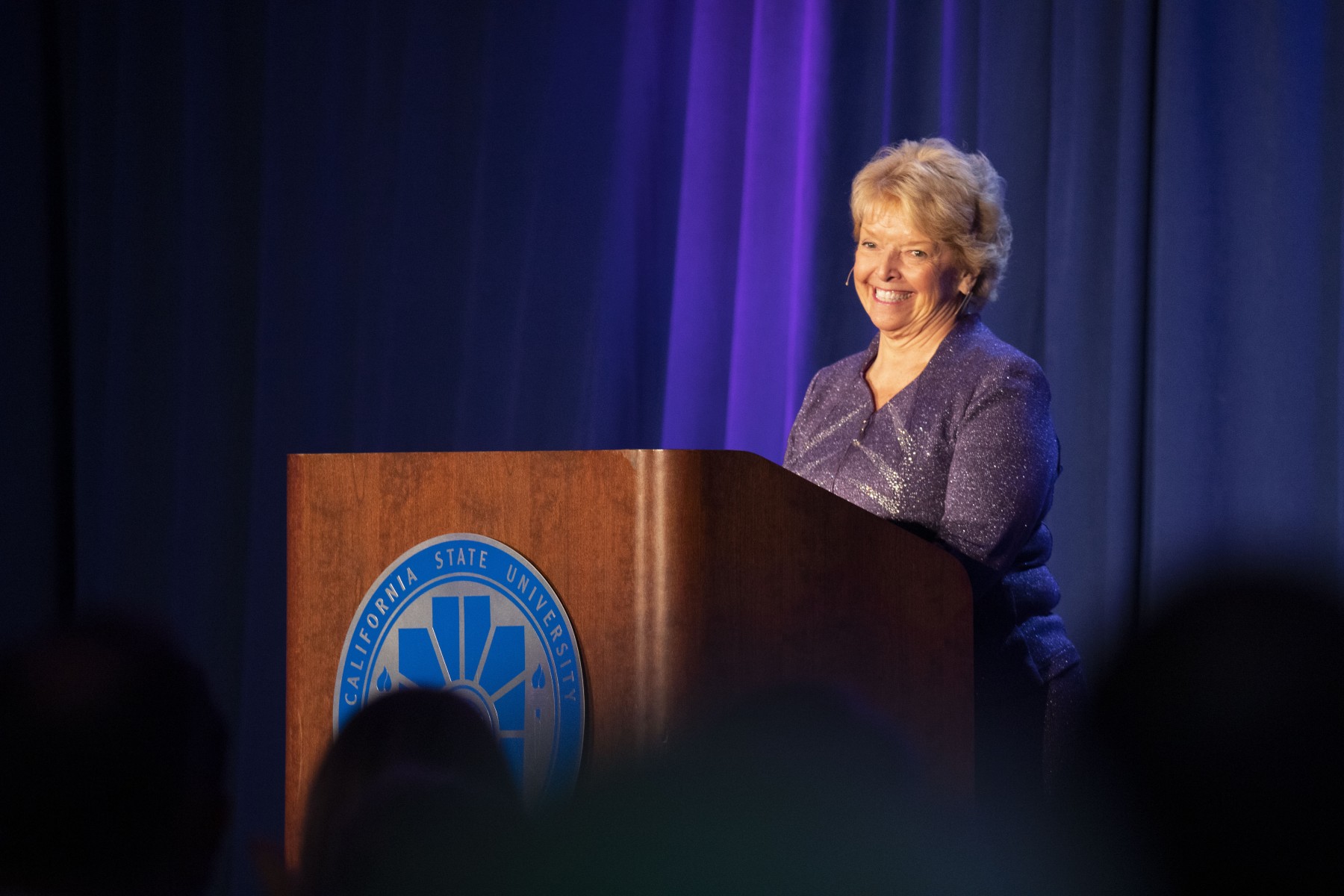 Cal State San Marcos President Karen Haynes reflected on her long, distinguished tenure and highlighted the university’s growth and accomplishments over the years during her 15th and final Report to the Community address on Thursday morning.

As part of the annual event on campus, it was revealed that CSUSM raised $55,035,210 in its first comprehensive fundraising campaign, Forward Together, blowing past its goal of $50 million.

Haynes initiated the Report to the Community address in 2005, and it has become an annual tradition in which she spotlights CSUSM’s achievements to a broad cross section of regional business, nonprofit, education and government leadership. The sold-out event this year featured more than 600 attendees.

Haynes, the longest-serving president in the California State University system, announced last fall that she will be retiring at the end of June along with her husband, Jim Mickelson, the director of ACE Scholars Services, CSUSM’s cutting-edge program for former foster youth.

“While there have been many beginnings for us during these 15 years, as our retirement approaches, farewells are less common,” Haynes said. “However, what remains for us, in our crystal-clear vision, is our optimism for the future of this very special place. The teamwork within our university, the partnerships with external entities. These provide us with a great source of satisfaction, but more importantly, they support our certainty that the successful trajectory of this campus is assured.”

Haynes told the story of how she and Mickelson first visited CSUSM in the summer of 2003 after she had been nominated for the presidency. She said they examined regional demographics, traveled to North County to explore the area, and walked the campus incognito.

“What we discovered was a place full of opportunities and potential,” Haynes said. “I knew that my preferred leadership style was not to be a maintenance leader and hoped that my predilection for visioning and growing organizations might be a fit. So I threw my fuchsia suit into the pool of nominees and, well, 15½ years later, I can say to you that I was right.

“Not only did my leadership style fit this young campus, but this campus and this community were ready and willing to embrace the challenges, opportunities and changes to move us to where we are today.” 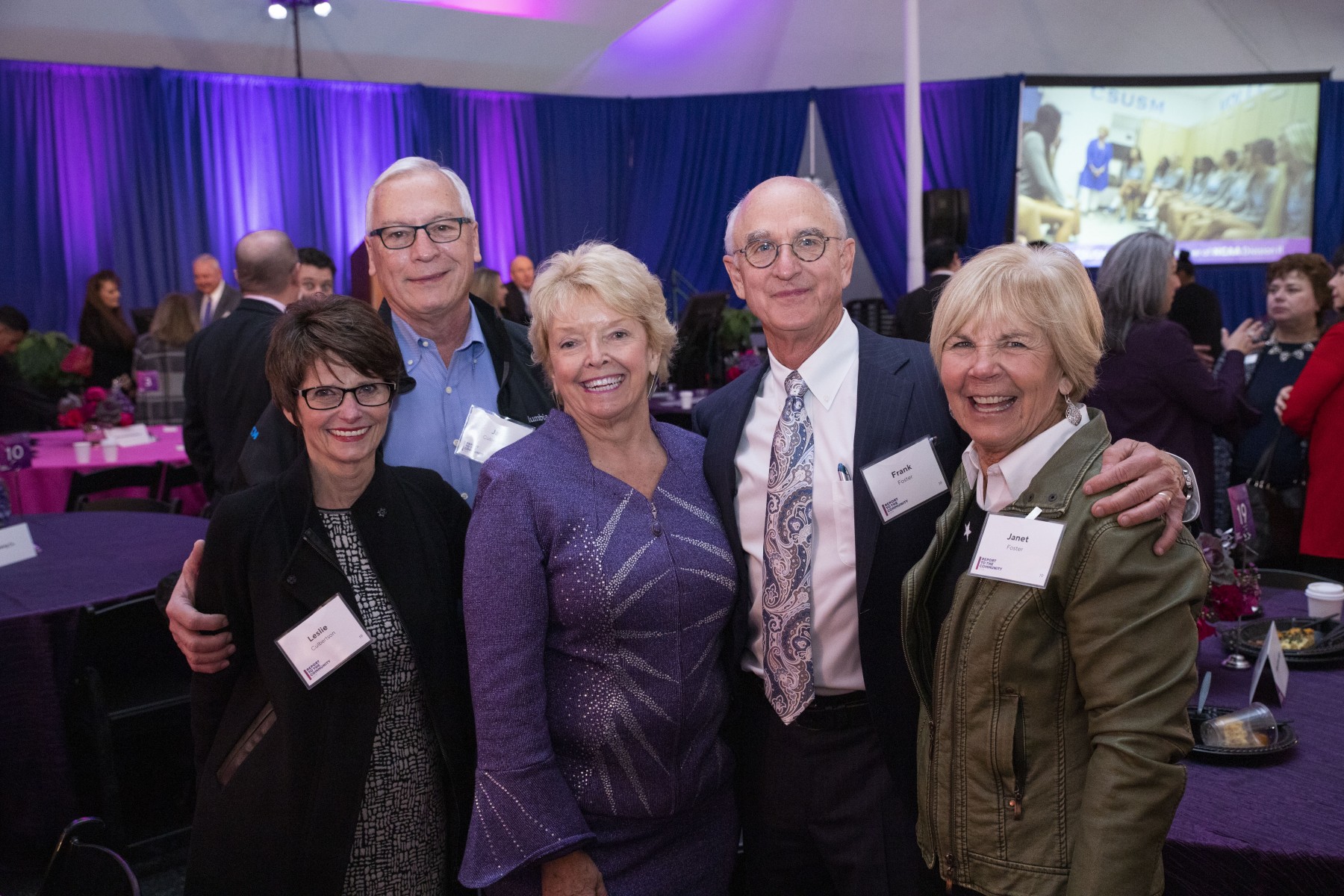 A big part of the legacy of Haynes will be the undertaking and success of Forward Together. When the campaign was first being planned in 2011, it was suggested that the target be $25 million to coincide with CSUSM’s 25th anniversary in 2015. Haynes instead threw out the goal of $50 million, and CSUSM was the youngest university in the 23-campus CSU system, and likely the nation, to take on such an ambitious challenge.

But under Haynes’ leadership, CSUSM not only reached the goal, it exceeded it by more than 10 percent.

“What President Haynes and I both knew was that we could pull together a great campaign, that non-alumni would contribute, and that everyone would want to be on this winning team,” Jack Raymond, the chair of the CSUSM Foundation Board, said before announcing the final Forward Together total.

“When I look at these figures, two words leap to mind, and I offer them now with the deepest gratitude, on behalf of the entire university – thank you!” Raymond said.

Prado-Olmos talked about how she came to CSUSM as a professor in the School of Education in 1997 and that she worked for two other presidents before Haynes arrived.

“I can attest that President Haynes is the president who stands out as a visionary leader, committed to student success and community well-being,” Prado-Olmos said. “When I look back to where we were in 2004 when President Haynes arrived – a small, young commuter school with just under 7,000 students – to where we are today, it’s hard to believe this is even the same university.” 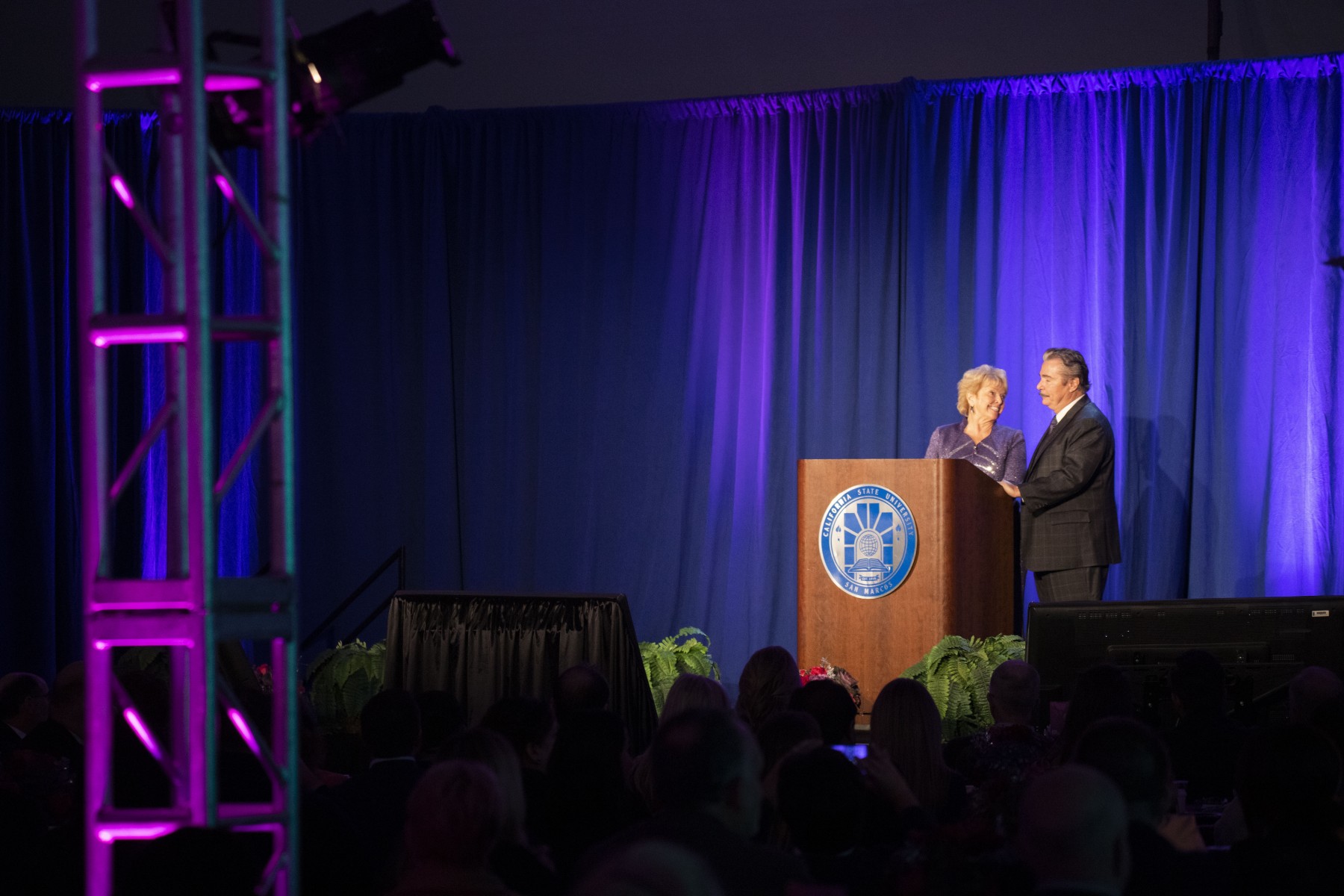 Report to the Community
President Karen Haynes is joined on stage by her husband, Jim Mickelson. Photo by Andrew Reed

Nick Krueger considers himself lucky to have found a perfect fit when he pledged a fraternity at Cal State San Marcos in fall 2016. It was during Krueger’s second year on campus and he had just …
Read more

Black History Month has been celebrated in this country for nearly 50 years, double that if you consider it began as a weeklong celebration in 1926. But instead of simply celebrating history, Cal …
Read more

One of the first calls Ellen Neufeldt made last summer when she learned that she had been appointed the new president of Cal State San Marcos was to the university’s first president, Bill …
Read more
NewsCenter

Resources for those Impacted by Sawday & Miller Fires