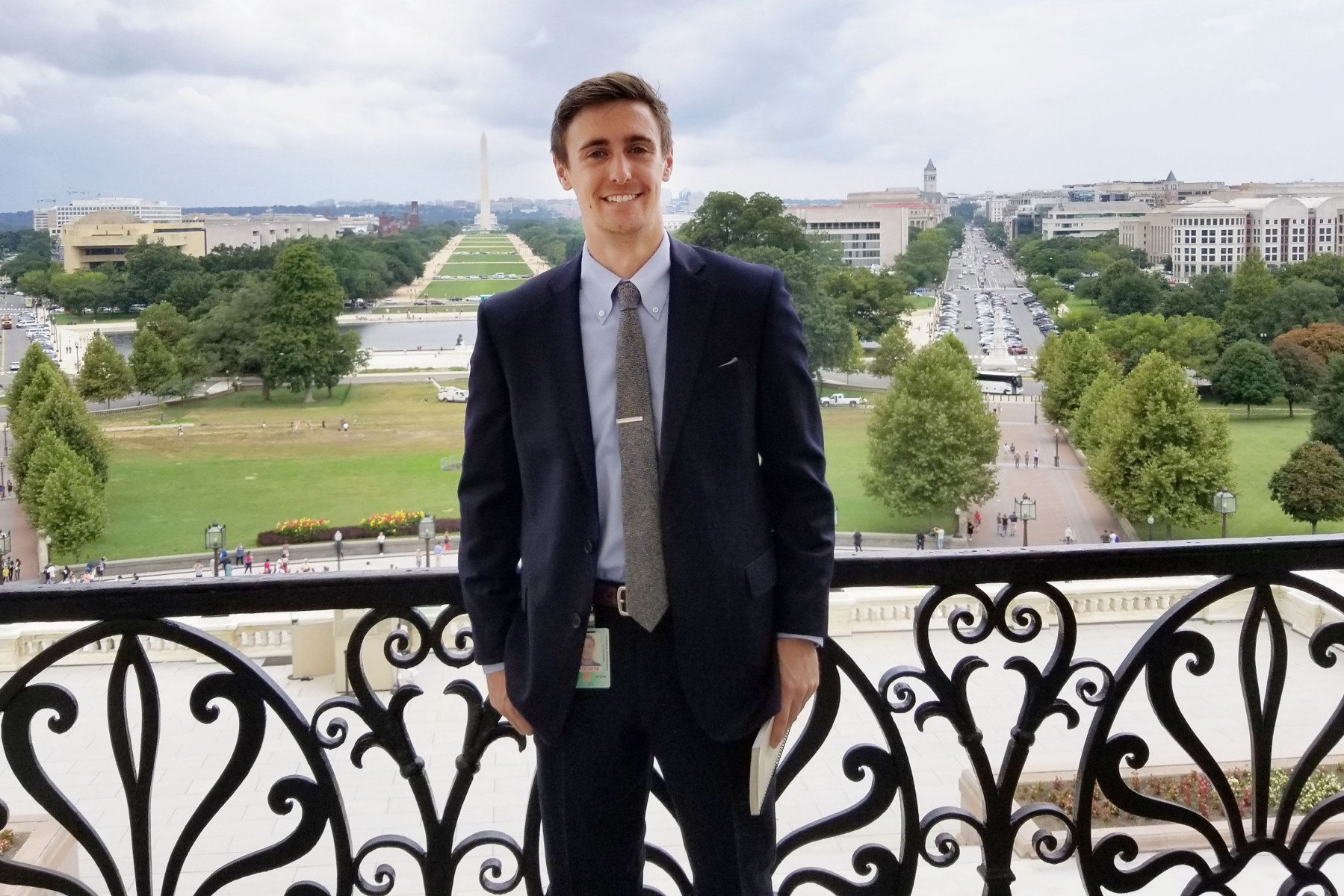 If Tyler Burch had preconceived notions about life as a congressional staffer, they quickly dissipated last fall.

Tyler, who will graduate from Cal State San Marcos with a bachelor’s in economics in May, spent the fall semester as a participant in the Panetta Institute Congressional Internship Program, giving him firsthand experience in the inner workings of Washington, D.C.

“I don’t think people who don’t work directly with government have an understanding of how much they do,” Tyler said. “I feel like when I talk to people, they expect that Congress members have staffs that are so big. But they don’t realize your congressional staff in a D.C. office is eight people – and they do everything that has to do with the Congress member’s legislative agenda.”

Tyler is back on campus this spring after spending the fall working in the Washington office of Rep. Alan Lowenthal of California’s 47th district, which covers Long Beach and parts of Orange County.

Tyler was among 25 students who participated in the program, which annually selects one student from each California State University campus, Dominican University of California, Saint Mary’s College and Santa Clara University.

The internship started with an intensive two-week prep period in Monterey at the Panetta Institute, which was founded in 1997 by former CIA Director and Secretary of Defense Leon Panetta and his wife, Sylvia. Then it was off to Washington for a 2½-month stint working on Capitol Hill. The Panetta Institute covers all program costs, and interns receive 20 semester units.

“It was incredible,” Tyler said. “We stayed a 10-minute walk from the Capitol building. Every morning, myself and whoever in the cohort had to go in earlier than the other interns – not all offices start at the same time – we would wake up at 7 and walk from where we were staying to the Capitol. It was really cool.”

Though participants are asked if they have a political party preference when it comes to being placed in a congressperson’s office, Tyler was comfortable working with either party. His interest in environmental policy as it pertains to economics led to his placement in the office of Lowenthal, who is on multiple environmental committees.

As with other interns in the program, Tyler’s first duties were providing tours to visiting constituents. But it wasn’t long before his responsibilities expanded.

“Once they get to trust you a little bit more, then they do things like send you to congressional hearings,” he said. “You take notes and write up memos to the rest of the office or whoever is interested in that legislative area.

“It involved a lot of writing. I appreciated that because it gives you a lot of experience with legislation that you don’t get otherwise. They could easily take you and just have you dealing with constituents constantly. That’s what you do in the beginning, but once I was there for a couple of weeks, they started giving me more things. It was really nice because I started dealing with the legislative side, which is really what I wanted to learn.”

Tyler is considering working in a political office for a year after graduating from CSUSM before applying to law school.

While some may think the Panetta Institute Congressional Internship Program is only for those interested in politics, Tyler said that isn’t the case. And, with a Feb. 18 application deadline looming for the 2019 program, Tyler encourages all CSUSM students to consider applying.

“Whatever you’re interested in, there will be something there for you,” he said. “There’s really no downside. Even if you’re a business major, there’s tons of stuff that has to do with business. If you’re into nursing, health-care policy is one of the biggest things on our plate right now. There’s something you can find no matter what. There’s no reason not to apply.”

More information about the Panetta internship is available online or by contacting:

Faculty Director of the Office of Internships