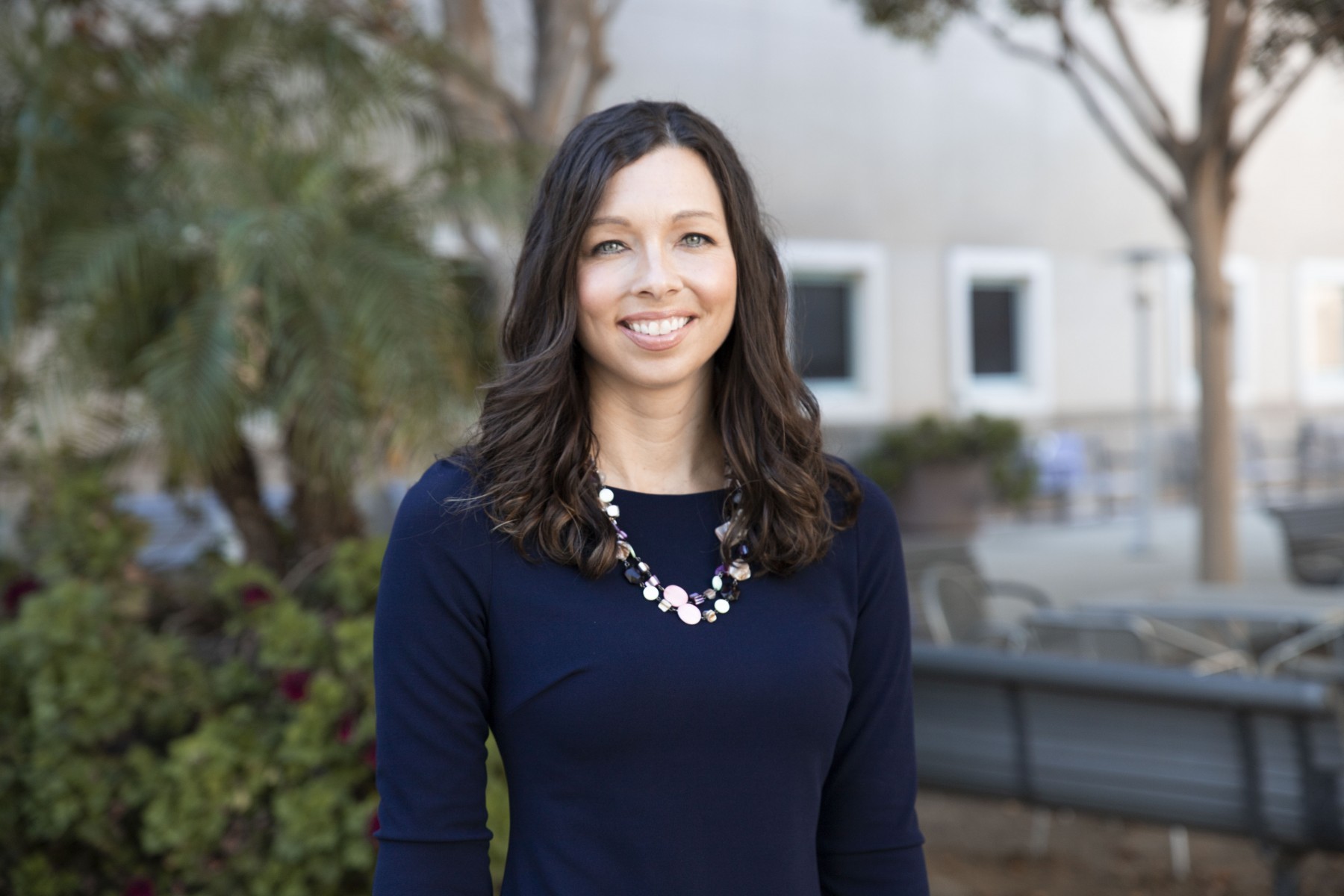 Jessica Berger began her tenure as the vice president of University Advancement in July. Photo by Andrew Reed

Jessica Berger wasn’t due to start her new job as Cal State San Marcos’ vice president of University Advancement for two more months when she visited campus for commencement last May.

The fact that Berger wasn’t officially working for CSUSM yet was irrelevant. Like the majority of CSUSM students, Berger is a first-generation college graduate, so the opportunity to see so many students experiencing the same joy she did was one that she wasn’t going to miss.

“I had between goosebumps and tears as I saw the expressions of the graduates, and I know what that feeling is like that you've made it,” Berger said. “I've always had this mantra that goals have no limit. And just to see how far those students have come, to hear their stories, and then to see their families and the impact that moment has on their families is really special.”

Berger officially joined the CSUSM family on July 12 after previously serving as the assistant vice president for development in the Office of College Advancement at Harvey Mudd College in Claremont. She is looking forward to helping more CSUSM students reach commencement day in her role with University Advancement and as the executive director of the CSUSM Foundation, which supports the university’s mission by cultivating and promoting charitable investment in the university and encouraging a culture of philanthropy.

“From Jessica’s very first visit to campus, she has embraced and connected with our mission of student success, and she truly bleeds Cougar blue,” said Steve Wagner, chair of the Foundation Board and the co-founder and president of Stone Brewing Co. “I have personally been very impressed with the energy and focus she brings to the challenges of her role. I’ve been thrilled to see her at numerous events in the community already, meeting people and starting the important work of building relationships.

“She has already proven to be a strong partner to the CSUSM Foundation Board, and her team has really responded to her inspiring leadership. She is truly a one-of-a-kind talent, and I am privileged to be serving alongside her – and hope that I can keep up!”

Berger grew up in Wickliffe, Ohio, just outside of Cleveland. Though neither of her parents attended college, their work ethic and tireless support left a lasting impression. Even today, they remain her biggest cheerleaders, sending flowers and a note on her first day at CSUSM to make sure she knew of their pride in her accomplishments. And, in a state crazy for Ohio State athletics, there are at least two people sporting CSUSM gear as her parents proudly represent Berger’s new school.

“I look up to them as two people who really instilled the values of hard work,” Berger said. “I couldn't do any of it without their support.”

Berger points to two pivotal moments that helped her understand the life-changing impact that education and philanthropy could have on students. The first was a shooting tragedy at her middle school. The second came a decade later when she saw firsthand how generosity could transform a community.

Berger was a student at Wickliffe Middle School in 1994 when a gunman killed a custodian and wounded four others at the school. The heart-wrenching event made a young Berger realize that life couldn’t be taken for granted and guided her down a new path in her education. After middle school, she transferred to a high school that was an hour away from her home to find a better educational environment.

“I started to gain confidence in realizing you have the ability to change your path,” she said. “You don't have to fall victim to any circumstance.”

Berger thrived in school and on the swim team, and she continued to swim competitively while working toward her bachelor’s in psychology at Wittenberg University in Springfield, Ohio. She attended Cleveland State University for her Master of Social Work, and it was after her first year there that she took a transformational trip to Kerala, India, to work with families impacted by the 2004 Indian Ocean tsunami that killed more than 225,000 people in 14 countries.

Berger spent a month in Kerala, leading a group of almost two dozen students researching non-governmental organizations to help those impacted by the devastation. It was astounding for her to see these organizations build two-story homes that could withstand a tsunami for only $2,000.

“It was something that was just mind-boggling,” Berger said. “It was a life-changing moment to see the impact that philanthropy had on communities.”

It also solidified Berger’s desire to make a difference through philanthropy and engagement.

Berger moved to California and began working for the MACHAO Orphanage Foundation, which provides assistance to orphans in Kenya. That led to a position with Polytechnic School in Pasadena to help with a $93 million campaign. It was also her introduction to educational fundraising.

“Education has always been the most important thing in my life,” Berger said. “My parents didn't have the opportunity to attend college, but I knew that it was my ticket to do anything and the key to open any doors for the future.

“At CSUSM, I wake up every day not feeling like it's a job because I'm working with people who are impacting that trajectory for our students and providing that support they need to be successful.”

CSUSM successfully completed its first comprehensive fundraising campaign at the end of 2018, and Berger and her team are already in the planning stages of the university’s next campaign. She is looking forward to helping CSUSM continue progress toward being a national leader in social mobility and student success.

As the university rolls out its new strategic plan, Berger and her team will be building an action plan focused on community partnerships and fundraising priorities that will impact the campus and region for decades.

“I hit the jackpot with a University Advancement team that is talented, committed and collaborative,” Berger said. “It's been exciting to dive right in and explore areas that we can thoughtfully build and grow in order to be successful and as we strategize the work that will need to take place for the next campaign. We also have an incredibly strong and passionate Foundation Board of directors who will be instrumental in our campaign planning and execution.

“Every single person at CSUSM is here for our students, to ensure their success. It has been really inspiring that every community constituent I’ve met with has, unsolicited, shared that they're here because of our students and our important mission.”