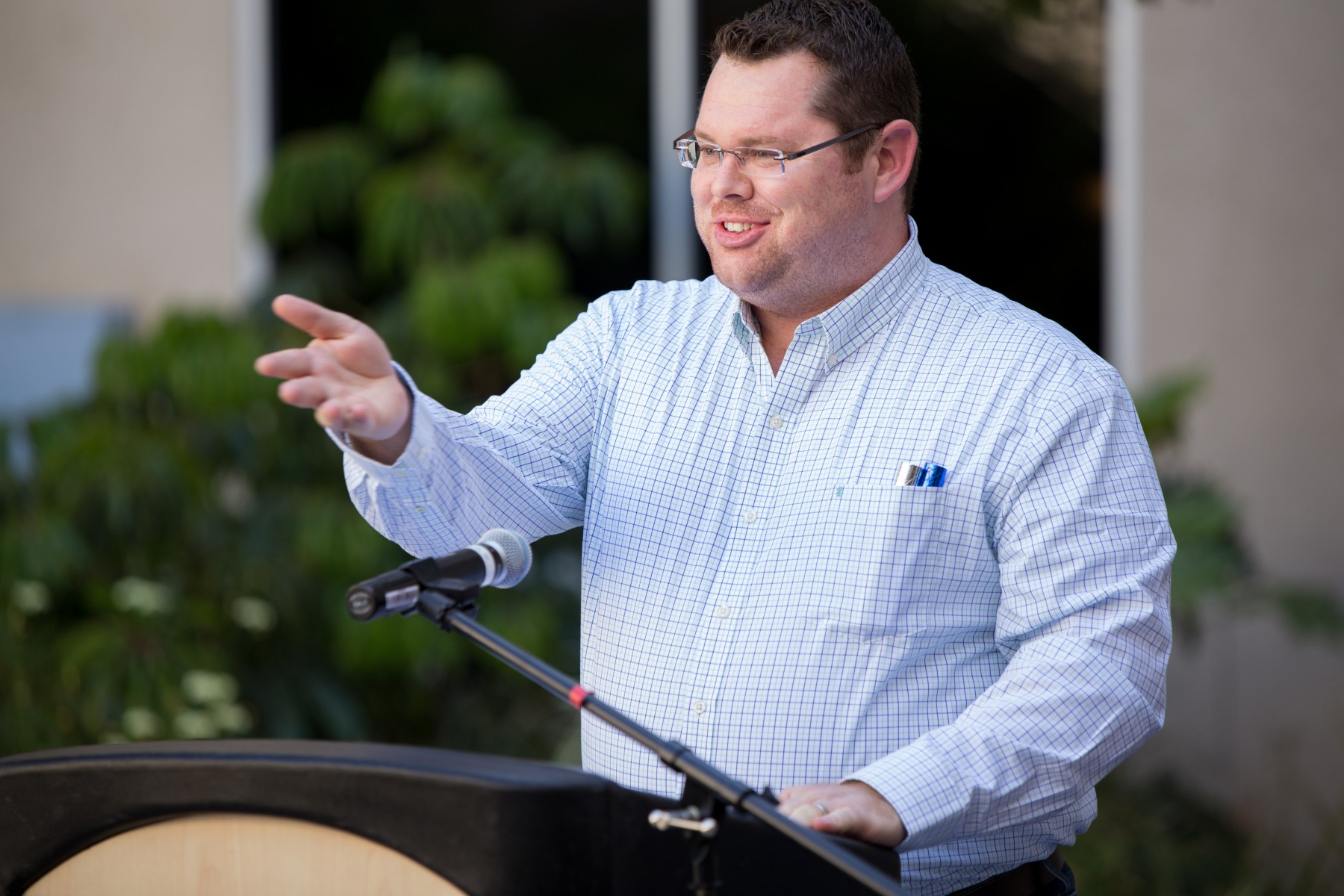 It seemed like a simple question in the moment. Yet Nathaniel Keifer-Wheals was left stumped by it.

It was 2017, and Keifer-Wheals was driving to the annual Cougar Night at Petco Park. His passenger was Michelle Romans, Cal State San Marcos' director of alumni engagement, who had become increasingly impressed by Keifer-Wheals’ relentless enthusiasm for trying to keep graduates connected to the university.

“Why do you love CSUSM so much? Why do you do this?” Romans asked Keifer-Wheals while en route to the home of the San Diego Padres.

Keifer-Wheals thought for a moment, then replied: “I don’t know. Why do I do this?”

So, over the next few months, he pondered a question that he had never really bothered asking himself. He thought about visiting the CSUSM campus area as a child with his grandparents who lived nearby, back when it wasn’t a thriving university but a chicken farm that sold eggs. He thought about being the first person in his family to attend college. He thought about his identity as a gay man and how CSUSM has long been a home to traditionally underserved populations – not only LGBTQ students but veterans, former foster youth and many others.

The next time Romans asked him the question, Keifer-Wheals was ready with an answer, the essence of which he summed up during an interview last month.

“If the university were to disappear tomorrow, if it went bankrupt and the chancellor pulled the plug on CSUSM, our community would be worse for it,” he said. “It does something for not only North County, but all of San Diego. To me, it became apparent that I want to do good for our community.”

These days, Keifer-Wheals is doing a lot of good in a lot of different ways. After serving two terms as president of the CSUSM Alumni Association, for which he helped reinvigorate engagement, he was named in early 2018 as one of the youngest directors of the CSUSM Foundation Board (he's now 34). In that role, he has contributed to the runaway growth of the university’s annual Giving Day by funding various challenges, and he has supported multiple campus initiatives, including the LGBTQA Pride Center and the whispering bench that was dedicated to former President Karen Haynes and her husband, Jim Mickelson.

Keifer-Wheals also is the CSUSM alumni liaison to the CSU Alumni Council, the representative voice of the CSU's 3.8 million alumni.

“Nathaniel is an alumni leader,” said Jack Raymond, the Escondido businessman and philanthropist who served three terms as an elected director of the Foundation Board and was recently named the board’s inaugural emeritus director. “He can talk convincingly about the importance of university financial support at any level. He sets an example. All of it encourages and sustains a culture of philanthropy at Cal State San Marcos. Alumni are a critical component.”

Earlier in his life, Keifer-Wheals would have seemed like an improbable candidate to champion the virtues of CSUSM to fellow alumni or donors. Raised mostly in Escondido, he was home-schooled in high school, during which he decided he wanted to blaze the family trail into college. But earning a business degree – his parents owned an electrical contracting company – was more important to him than experiencing campus life.

After fulfilling all of the pre-business requirements at Palomar College, Keifer-Wheals transferred to CSUSM in 2007. During his two years at the university, he worked full-time and was otherwise laser-focused on the finish line – he consistently took more than a full load of classes and tacked on summer and winter courses as well. He graduated in 2009 with a bachelor’s in management information systems.

“I wanted to be done in exactly four years. And I was done in four years, but man, it was hard,” Keifer-Wheals said. “I was not a really involved student, either. I didn’t live on campus because my family lived really close by. One reason why I’m a super-involved alumnus is because I’m making up for my lack of involvement as a student. In my head, that’s the way it works.”

Keifer-Wheals started compensating for lost time soon after graduating, though his path to young alumni leader wasn’t without some life-altering detours. In 2010, he helped found the Alumni Association chapter for the College of Business Administration. Sandwiching that feat, though, were a three-week vacation to Australia, where he met the English man who would become his husband, and a three-year period in which he lived in England with his future husband, Dean.

While in England, Keifer-Wheals planned to stay connected to the alumni chapter, but it proved too difficult in the era before Zoom or even FaceTime was ubiquitous. He was able to work remotely for a publishing company, at least until he was laid off early in 2014, at which point he was recruited for a contract job as a systems analyst for Historic Royal Palaces, an independent charity that manages some of the United Kingdom’s unoccupied royal palaces.

A job, in other words, working for the Queen of England.

“I had an office above the crown jewels in the Tower of London, which for me, for most Americans, is the coolest thing ever,” he said. 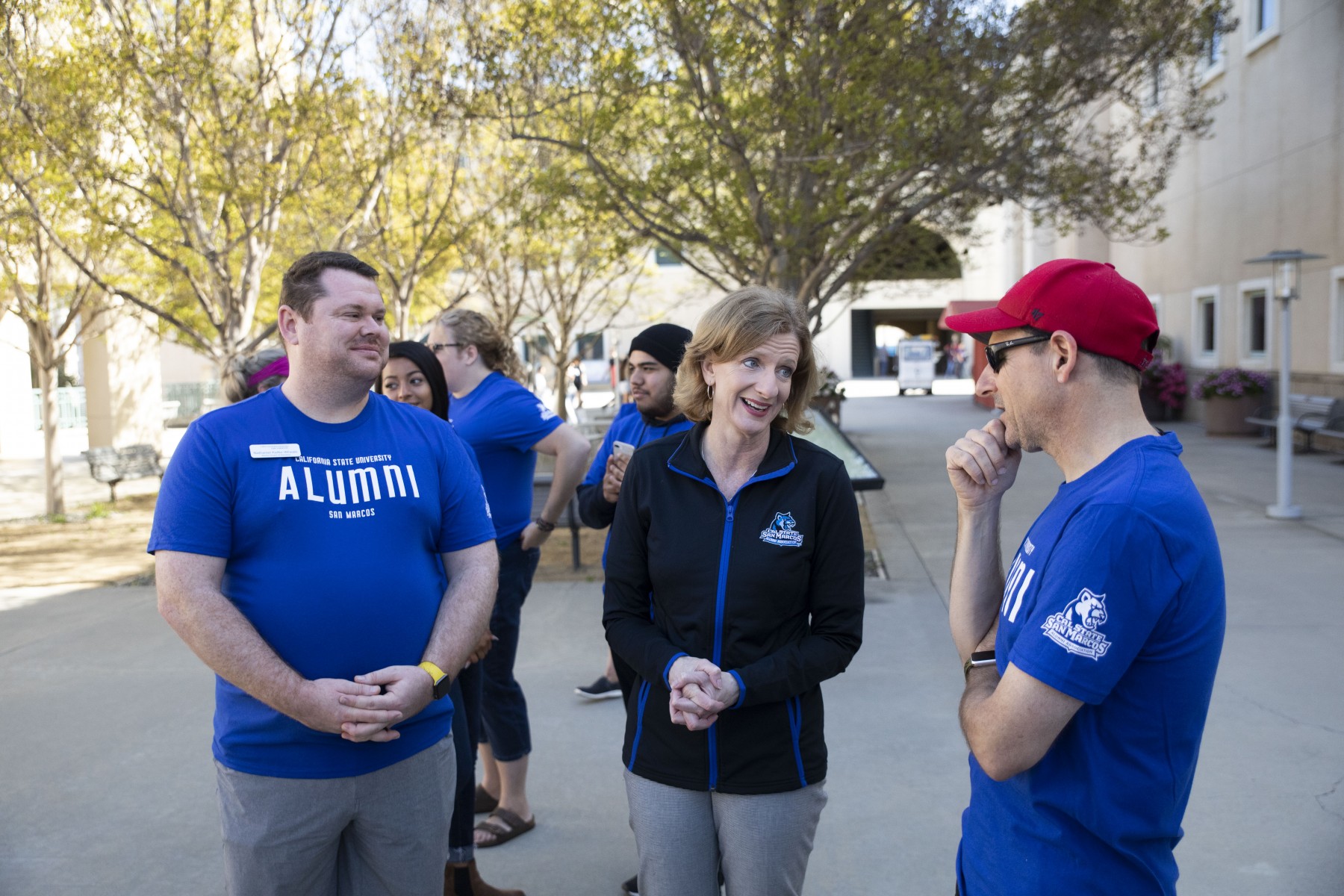 Keifer-Wheals with President Ellen Neufeldt and a fellow alumnus on alumni day of service in 2019.

Keifer-Wheals and his husband moved back to San Diego County after the U.S. Supreme Court ruled in the groundbreaking case that made same-sex marriage a legal right, and Keifer-Wheals immediately reconnected with the CSUSM alumni team. He revived the CoBA chapter that had stagnated in his absence, and in 2016 he was asked to join the alumni board in the role of events chair.

It was the perfect position for a self-described “idea machine” who kept the Alumni Association staff busy with his constant suggestions of ways to engage graduates after they leave the university. One of his most fruitful ones, Romans said, was a reimagining of Cougar Night, an event that has been held for more than 15 years and switched locations multiple times, from the Western Metal Supply Co. building inside Petco Park to a pregame tailgate in a parking lot outside the ballpark.

“Nathaniel isn’t much of a sports fan, so he thought it would be fun to change it up a bit and have the pregame event at a local brewery because that is something he would actually attend,” Romans said with a laugh. “We made the change, had the pregame at the Stone Brewing Tap Room right outside the gates of Petco Park, and it ended up being a huge success.”

Keifer-Wheals went on to serve for two years as board president of the Alumni Association, ending last summer.

“What sticks out the most to me is how sincere Nathaniel is about wanting to do great things for fellow alums, CSUSM, our students and this region,” Romans said. “He attributes much of his success to the education he got at CSUSM, so the passion you see in him is honest, and it shows in the ways he has given back as a volunteer and a donor.” 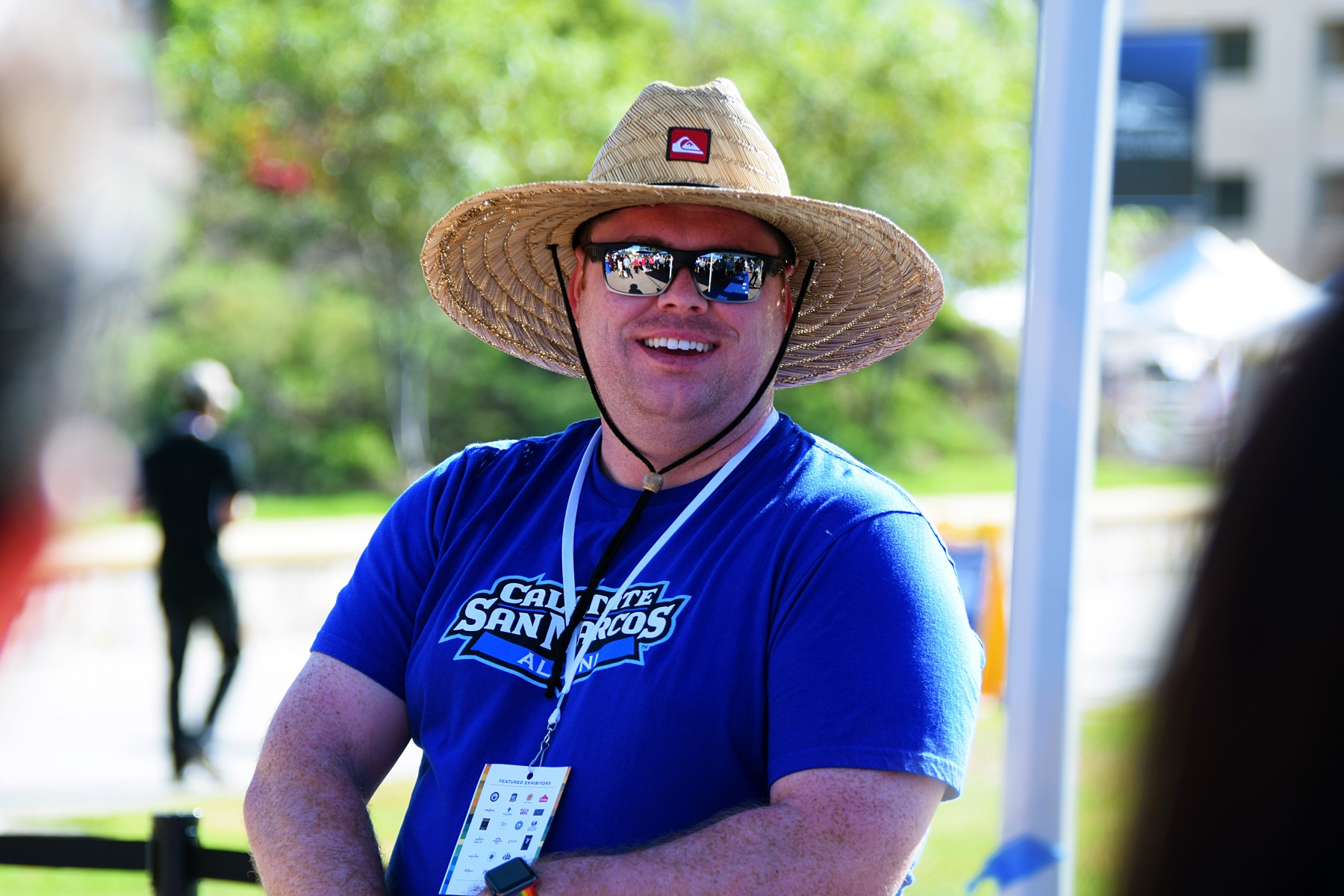 Keifer-Wheals at Taste for Student Success, an event he helped to create, in 2019.

As Keifer-Wheals became more established in his career – last month he began a new job as director of client strategy for Optum, a Minnesota-based company that’s part of UnitedHealth Group, one of the world’s largest health-care corporations – he broadened his focus from alumni relations to philanthropy. Now in his third year on the CSUSM Foundation Board, he has taken a particular interest in Giving Day each November. Inspired by the example of major university donors Steve and Laura Wagner, Keifer-Wheals has thrilled to the notion of “gamifying” Giving Day by funding challenges that drive alumni and others to compete to win money for their favorite causes.

Also inspired by Raymond’s philanthropic leadership, Keifer-Wheals downplays the suggestion that he, in turn, is inspiring the next generation of CSUSM donors.

“Although I’m happy to play an inspirational role if it actually works,” Keifer-Wheals added. “When I was interviewing for the Foundation Board, Jack said, ‘We need alumni who help foster that culture of philanthropy, and I think you’re one of those alumni.’ That was neat to hear.”

This is a time of transition for Keifer-Wheals. In addition to his new position at Optum, he’s two months into the Fully Employed MBA program at CSUSM, which he’s due to complete in December 2021. He hopes to use the master’s degree to teach business someday, perhaps even at his alma mater.

Keifer-Wheals’ long-term philanthropic goals are no less grand. Perhaps the most eye-catching is that he wants to donate enough to have CSUSM’s business college named in his honor. Not a bad legacy for someone who, after some soul-searching, knows precisely why the university means so much to him.

“One person can’t make a big difference, generally speaking, but a bunch of ones put together can do something together,” he said. “That’s what I see CSUSM as – it’s my ability to give back to my community. I love North County – I don’t ever want to leave again – and the university is at the heart of it. Equal opportunity to education is what CSUSM represents, and that’s something to be protected and fostered.”